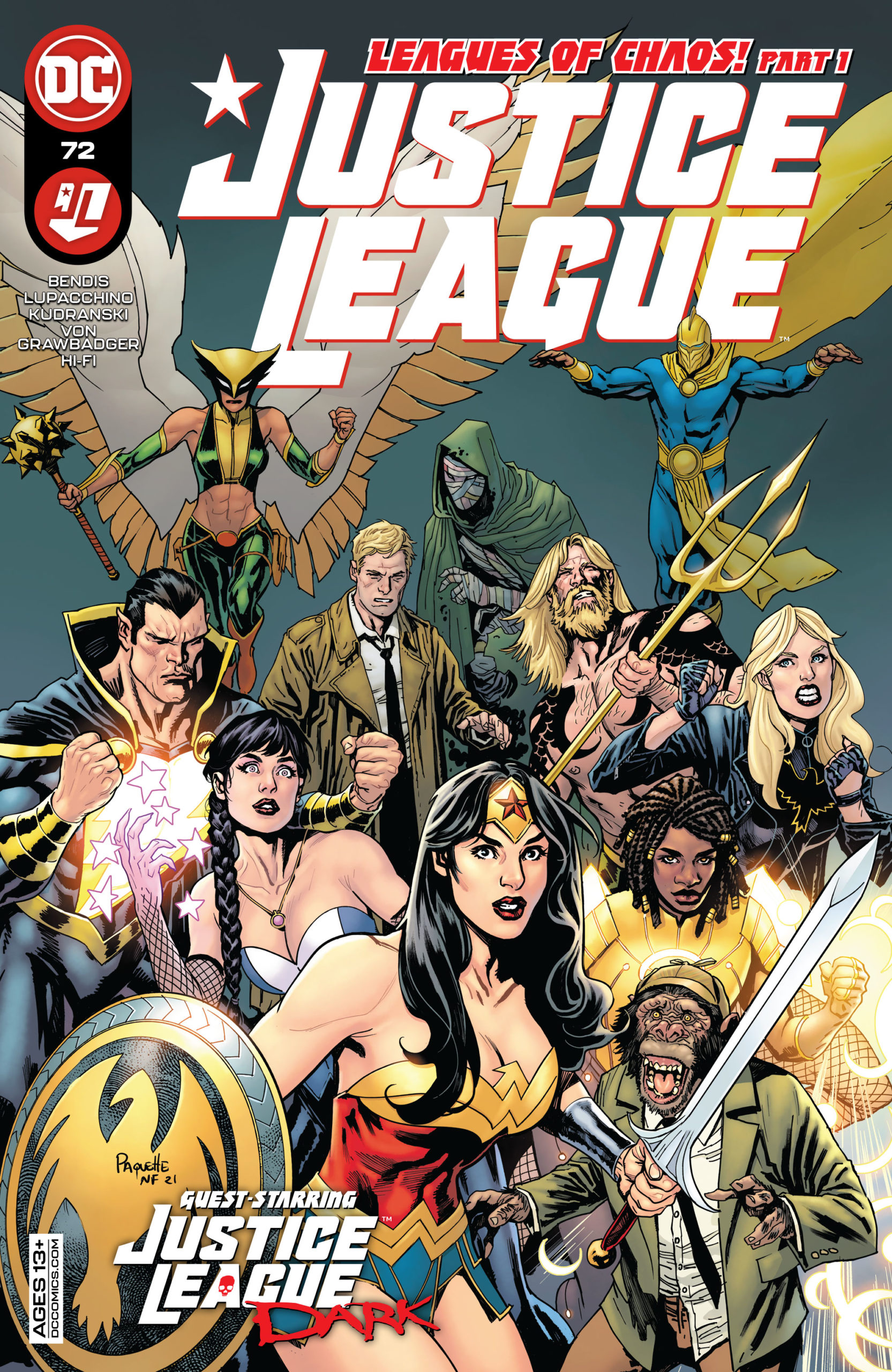 Chaos is the name of the game in this week’s Justice League #72, as the core group teams up with the JLD to defeat Xanadoth, the Lord of Chaos.

After 72 issues of Justice League, I’m beginning to think that the League is cursed. They’re never able to throw a normal event without some sort of cosmic, apocalyptic nightmare inserting itself into the mix. Alas, during the annual Justice League charity carnival, Zatanna has a vision: someone is going to betray the League.

Meanwhile, Black Adam has returned to his Kingdom, Kahndaq, where he’s greeted by a mysterious woman who calls herself Xanadoth, Lord of Chaos. Apparently, she has grand plans for revenge; however, she needs a simple favor – to use Black Adam as a host. Needless to say, things go downhill from there.

With Xanadoth did Doctor Fate a Bendis Crisis Cage Decree…

We’re on the final leg of Bendis’ run on Justice League, and I have to say – I actually enjoyed this issue. I’m beginning to think that I might have been a little too hard on Mr. B. Part of me wonders if the problems that Justice League has faced over the past few months have had less to do with Bendis and more to do with DC’s editorial mandates. Let’s get real, the publisher has given the keys to the kingdom to Joshua Williamson and the dude is writing like 100 books right now. He has a vision and direction for DC’s metanarrative, and DC’s editorial crew doesn’t seem to mind changing plans in order to accommodate Williamson’s story. Proof? Click on the preview link for Justice League #72. Notice that the issue summary refers to Bendis’ Royal Flush Gang arc along with something about Black Adam’s trial. It’s obvious that DC forced Bendis to abruptly change course.

Moreover, I bet that, if given the opportunity, Bendis would have done some really cool things with the JLD characters. it’s obvious that he’s been paying attention to the JLD for the past few years. For example, his treatment of Doctor Fate is spot on, not to mention that Xanadoth is a fantastic addition to Doctor Fate’s meager Rogues Gallery. In short, Bendis integrates the JLD characters effortlessly into the Justice League universe. It’s quite the tour de force.

Unsurprisingly, DC’s hired three different artists for this issue. This undoubtedly had to do with the editorial team’s abrupt change of plans. However, what I did find surprising was how natural the final product felt. Usually, when there are too many cooks in the kitchen, the dish comes out burnt. Yet the art Justice League #72 was handled in such a way that the transitions between art styles appeared natural. For example, moments that focused on the JLD characters were aesthetically dark; literally, the panels were mostly black. In contrast, when the issue shifted to the Justice League proper, the aesthetic shifted to a more streamlined, colorful design. The juxtaposition of styles worked well, providing visual cues for readers as they moved from scene to scene.

Justice League #72 is a breath of fresh air for a title that’s been subpar for months. Bendis penned a well-paced, engaging story that was fun and entertaining. Szymon Kudranski, Emanuela Lupacchino, and Wade Von Grawbadger managed to make lemon drizzle cake out of lemons, creating a well-structured, aesthetically unified issue. Overall, I can’t help but wish all of Bendis’ Justice League read like this issue. Alas, wishes are for children… but then again, so are comics… NOT.

Final Verdict: It’s surprisingly good. Give it a shot.