The Evolution Of Makeup In The Batman Movies – Part Two

From Tim Burton’s Batman in 1989 to Christopher Nolan’s The Dark Knight in 2008, special effects makeup has been used to bring various Batman characters to life. In part one of a series of articles looking at the makeup in the Batman movies, I concentrated on the two Tim Burton Batman movies. In this second part, I’ll be taking a look at the makeup effects used in both of the Joel Schumacher films, Batman Forever and Batman & Robin. 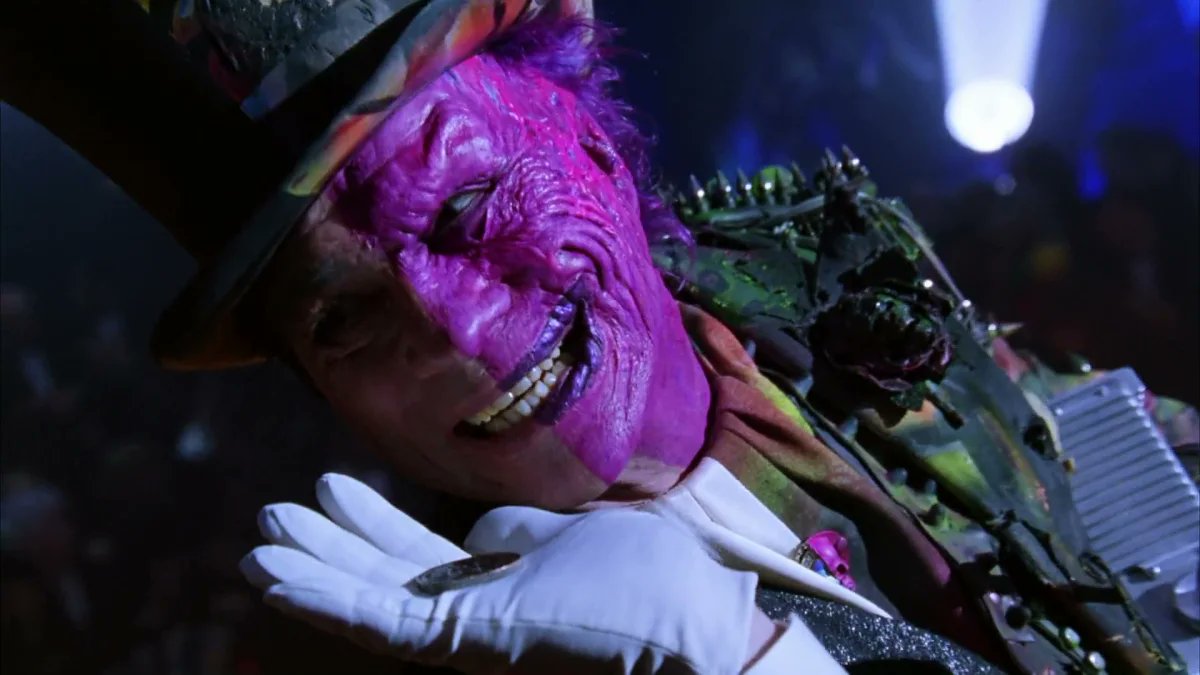 Baker created the facial scarring for the character Two-Face, as played by Tommy Lee Jones.

Casts of Jones’ head were taken and used as a test for the latex pieces worn by Jones when portraying the scarred villain. Fabricated on a biscuit foam lifecast of the actor’s face, this test used foam appliances cast from the appliance molds that have been glued down, blended, and painted just as they would be if applied to the actor himself.

The head was first painted with a base skin tone, with the eventual gloss purple and pink hues added to the left side. The appearance is very similar to that of the final makeup, however, the paint colors used here are noticeably darker when compared to the on-screen character. 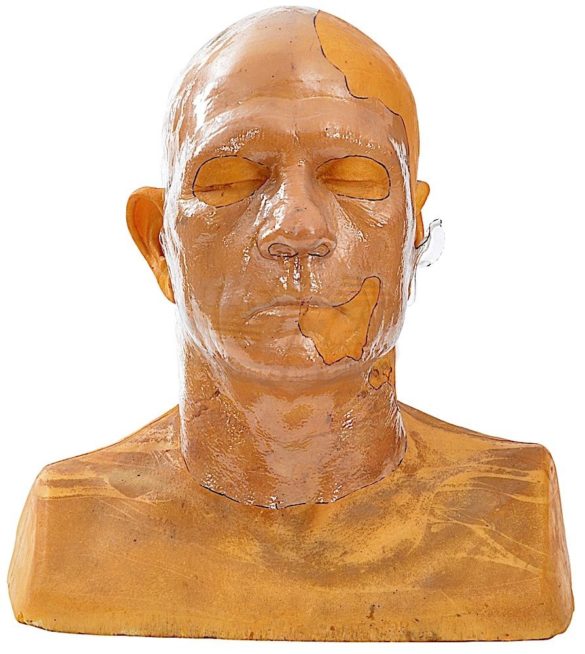 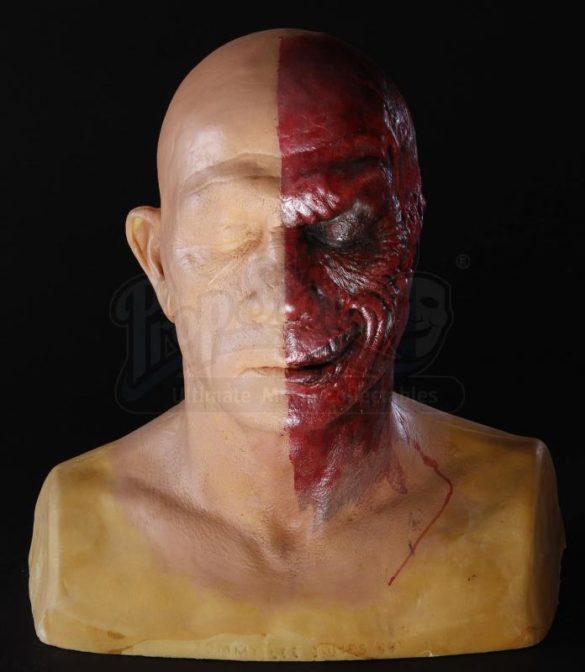 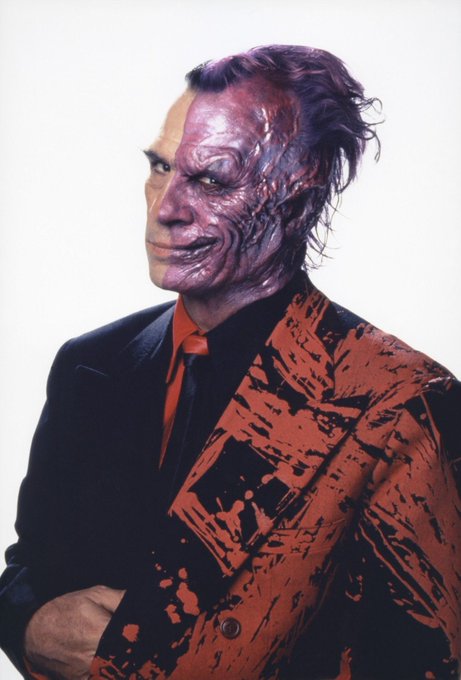 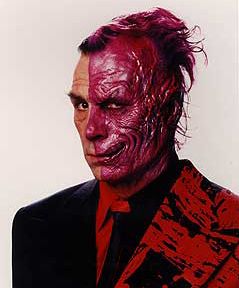 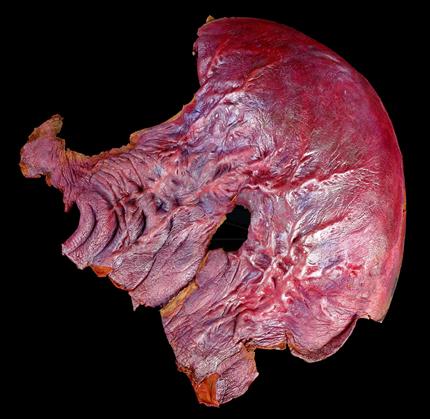 If you take a look at the pictures above you can see that the first tests that Tommy Lee Jones did for the makeup are also slightly different, as is the costume. Two-Face’s design was originally going to be more graphic, with a bulging eyeball and exposed teeth on the left side. Rick Baker wanted to portray these iconic qualities early in the design process. However, these were quickly vetoed to make the film more family-friendly. This is one of my favorite makeup looks in any Batman movie and I personally prefer it to the look that was used in The Dark Knight. 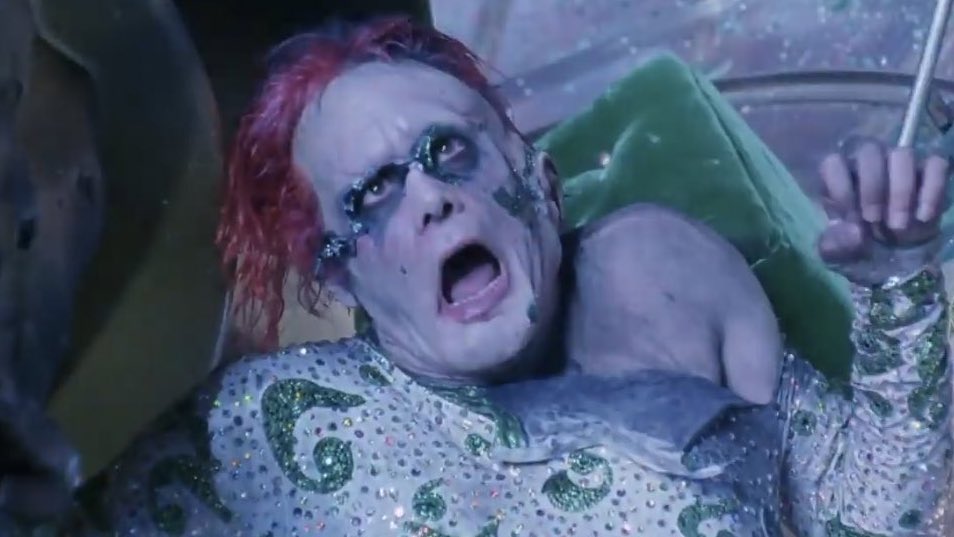 As well as creating the makeup for Two-Face, Baker also created The Riddler’s seemingly melted face which can be seen towards the end of the film. 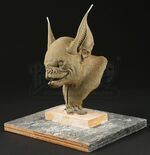 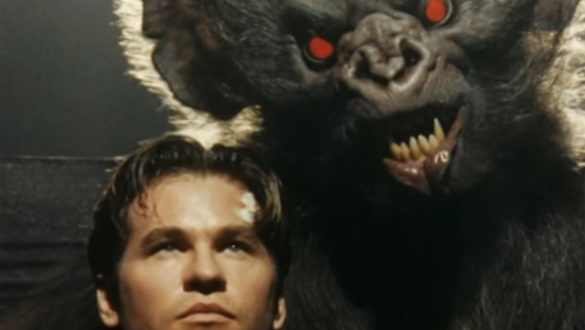 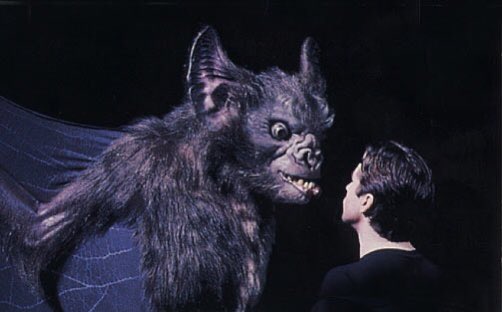 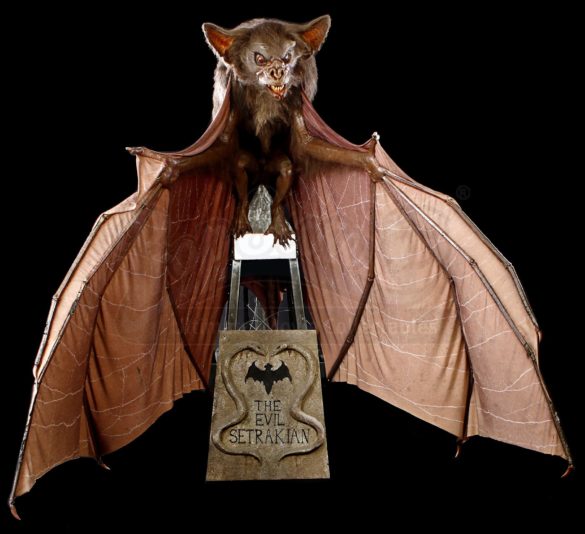 He also created a rather menacing giant bat animatronic puppet which unfortunately you only get a tiny glimpse of in the movie. We don’t really get a good look at it anywhere except for in the trailer, or in a deleted scene where you can see how huge and detailed it really is.

In 2015 Rick Baker auctioned off pieces from movies that he’d worked on over the years. Among the pieces that were auctioned were the giant bat animatronic, Two-Face foam head casts and makeup tests, and the piece of Two-Face latex (as seen above) which was sold for $350. Not bad for a dried-up piece of latex!

In 1997 Schumacher directed a second Batman movie, Batman & Robin. Considered by some to be the worst Batman movie ever, it does actually have some extremely impressive makeup effects. First up is Mr. Freeze, portrayed in the movie by action star Arnold Schwarzenegger. 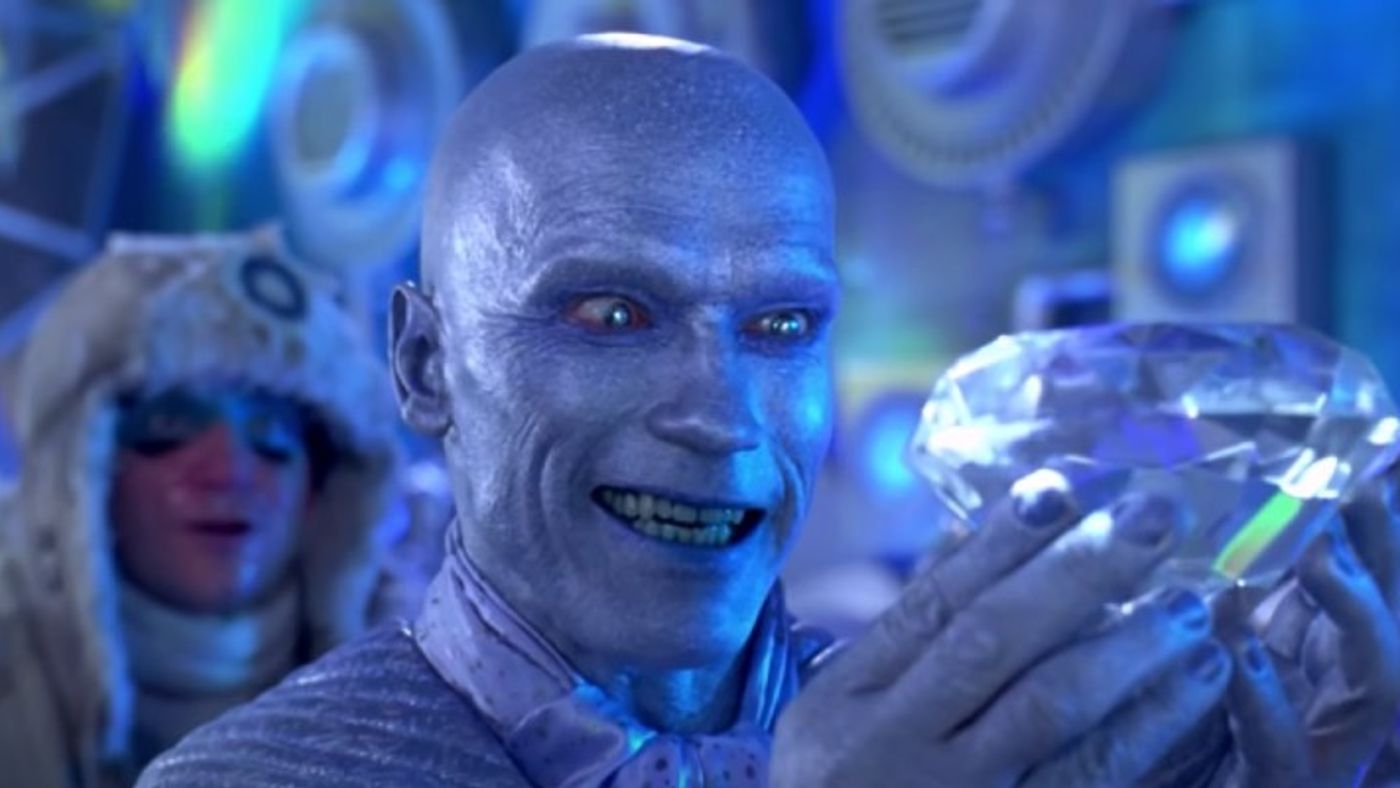 The team that brought Mr. Freeze’s look to life comprised of make-up artist Jeff Dawn, assistant Jim Kail, and hairstylist, Peter Tothpal. Working together the team was able to create a unique design to transform Schwarzenegger into Batman’s coolest nemesis.

The process began with the actor’s hair – or rather, it began by covering up the actor’s hair. As Freeze is known for sporting a bald look, Schwarzenegger had to follow suit. The actor wasn’t keen on shaving off his locks, so Tothpal had to work around this, by covering the actor’s head with a cap.

To begin, he would use a water-based resin to slick Schwarzenegger’s hair back. This was then dried with a hairdryer, to keep it all in place. From here, Dawn and Kail would cover Schwarzenegger’s face with a special product, which would protect it from glue, before Tothpal attached the foam latex bald cap. This was carefully glued to the actor’s head, then using putty around the sides, the edges were smoothed out. 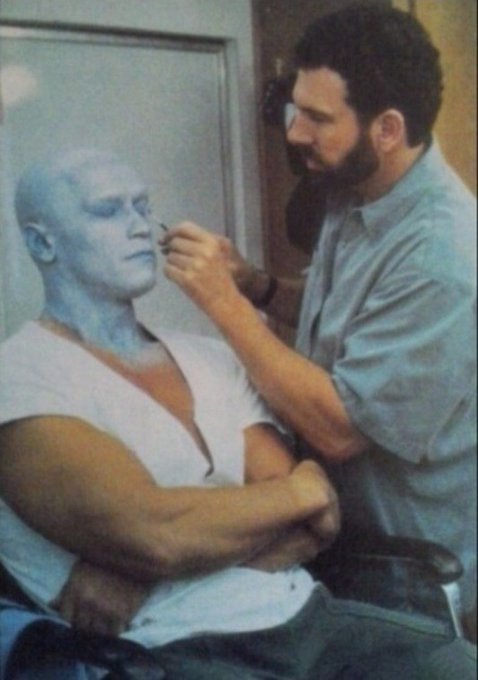 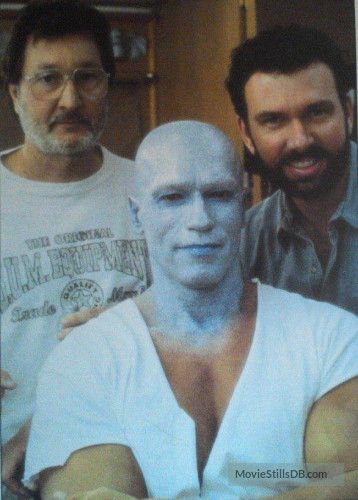 Arnold’s eyebrows were then flattened and covered with appliances before paint was added to his skin. The paint comprised a metallic silver base coat, followed by a mix of blue and white acrylic, splattered over the top to create texture.

To complete the transformation, additional touches of color were added around his eyes and lips, before blue contact lenses were used to cover his irises. It took 6 hours a day to get Schwarzenegger into his prosthetic makeup and costume and this had to be repeated on a daily basis. Had Schwarzenegger agreed to shave his head, it would have trimmed at least an hour off the process. 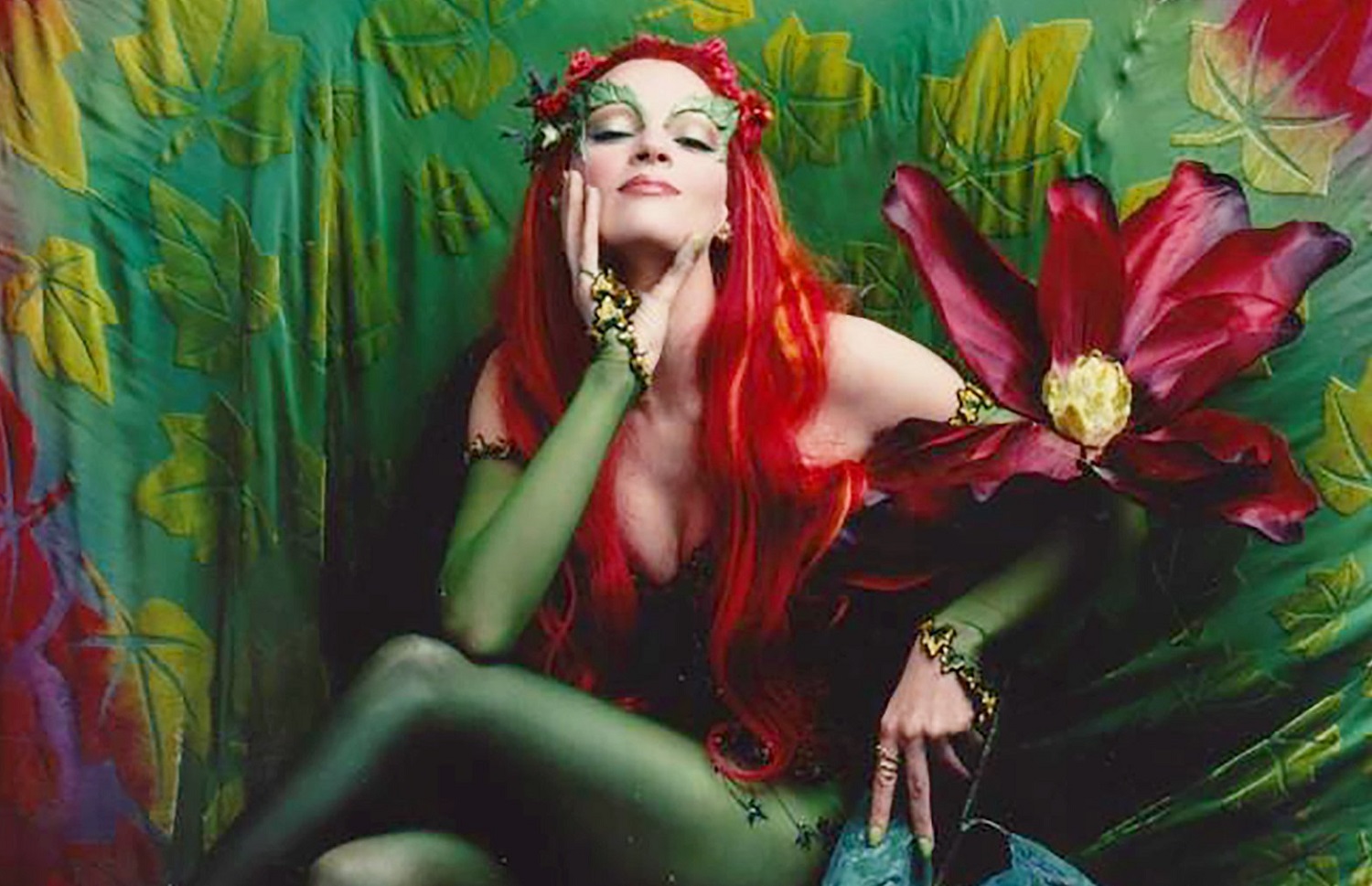 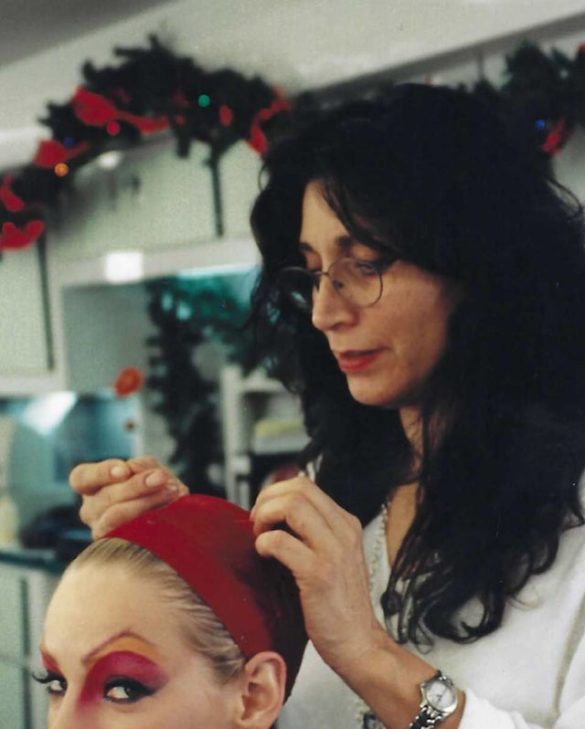 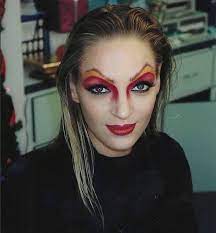 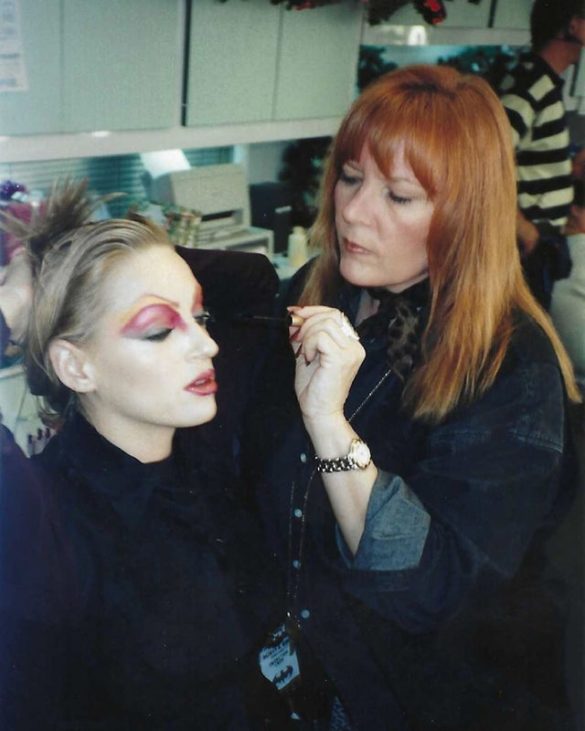 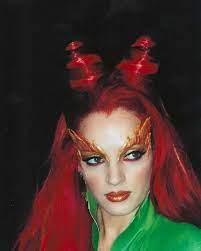 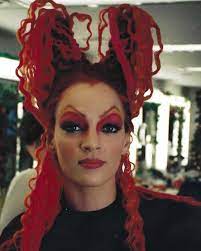 The prosthetic silicone leaves around Poison Ivy’s eyes were actually created by Rick Baker and made in his lab. In 2021 Ve Neill recreated Poison Ivy’s look for her Legends Makeup Academy and you can see the demo below.

The last villain in the movie that required extensive makeup was Bane, played by the late Jeep Swenson. 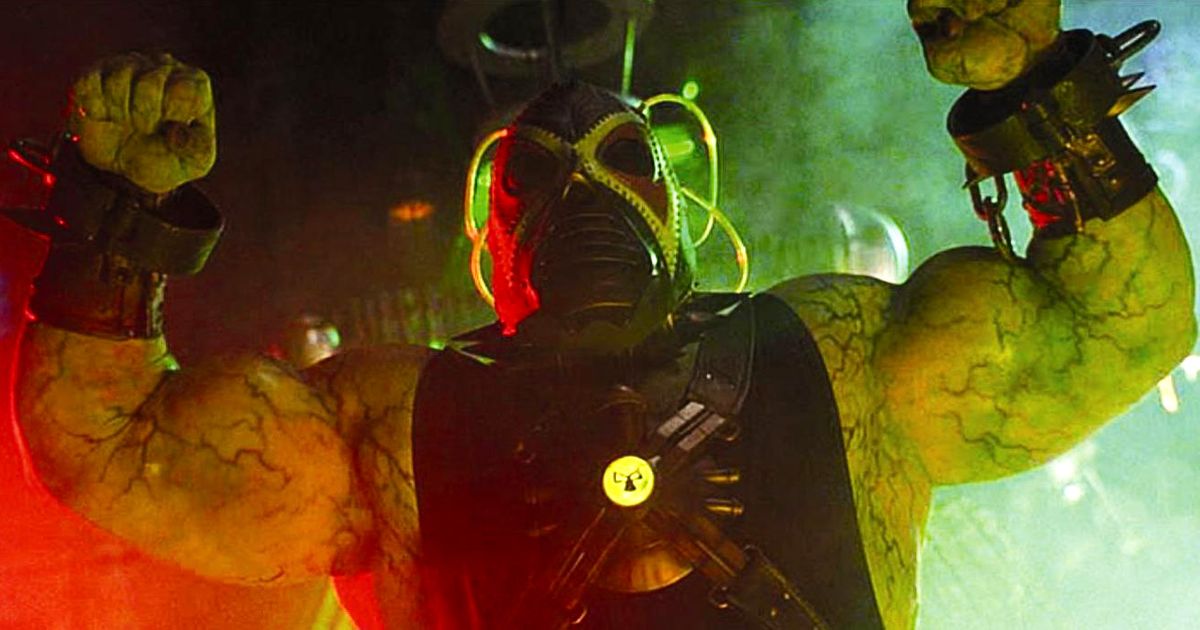 Brian Penikas designed Bane. In an interview about the making of the movie Ve Neill says,

I called Brian Penikas many months before we started shooting, and asked him to design an airbrush makeup that would make Bane look like he’s been infused with Venom, which was very colorful and fun rather than gruesome. Just do what you want.

Penikas and colleague Rick Stratton embarked upon an airbrush makeup requiring up to three hours a day, painstakingly applied to Swenson’s formidable body in a specially built ventilated tent.

We wanted Bane’s makeup to be real comic book, with the colors bright and vibrant so they would show up well against the darker sets. The first makeup tests took five hours to apply, but once the wardrobe was incorporated into the design, and Rick came in to help as a partner, we got it down to about two-and-a-half. 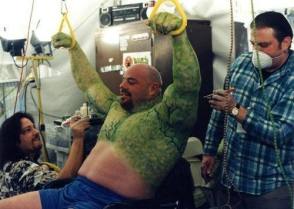 The entire Bane makeup is done with Fred Blau’s great tattoo ink, which we airbrush in many layers over Jeep’s body.

Penikas and Stratton painted freehand rather than with stencils, working from memory and full-body mannequins. Stratton both knew and respected the Bane of the DC Comics, even though the film’s writers clearly didn’t:

It’s fun to elaborate on the character and make him the movie’s own. The idea was to flush Bane of any healthy-looking skin tone, and then bring out clusters of veins in all the extremities. As if he’s about to explode at any moment from the Venom being pumped through his body.

I hope you’ve enjoyed reading about the makeup used in the Joel Schumacher movies. In part three I’ll be taking a look at the makeup effects used in Christopher Nolan’s Dark Knight Trilogy and at Jared Leto’s Joker, as seen in both Suicide Squad and Zack Snyder’s Justice League.

The Batman Already Has A Line Of Funko Pop! Figures