The Evolution Of Makeup In The Batman Movies – Part One

From Tim Burton’s Batman in 1989 to Christopher Nolan’s The Dark Knight in 2008, special effects makeup has been used to bring various Batman characters to life.

In 1989 make-up artist Nick Dudman was tasked with bringing to life Batman’s most famous foe, The Joker, portrayed by the legendary Jack Nicholson. When Jack Nicholson signed on to play the Joker in Batman, he had no intention of portraying him as a campy comic book villain, so the look needed to be right. In a behind-the-scenes featurette, it was revealed that Nicholson had the final say over the Joker’s makeup design — and he took it quite seriously.

We had a lot of talks. Creatively, it was very specific.

Nicholson noted the character in the comics had an elongated chin, which he was interested in toying with as seen in some photos shared in the featurette. 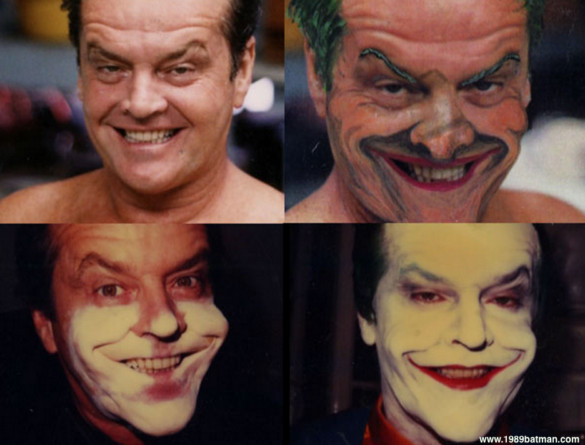 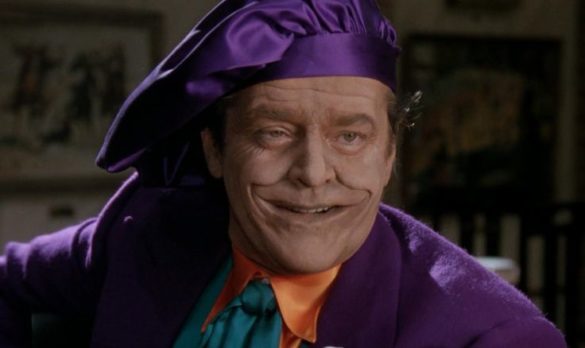 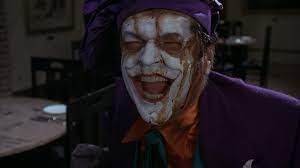 The actor also noted the makeup process was even more challenging due to an allergy he has, saying:

One of the ironies of my life is I am allergic to spirit gum, the basic unit to movie makeup.

The Joker’s smile was created by taking casts of Nicholson’s face and then molding prosthetic pieces. One of the most impressive effects in the movie is when The Joker removes the flesh-colored makeup to reveal a white face underneath. This effect was created by using acrylic-based white paint with a layer of silicone oil over it. The skin-colored make was then layered over the silicone oil (which nothing sticks to) and it could be easily wiped off by Nicholson during the scene. This is without a doubt my favorite makeup look for The Joker, as it’s by far the most detailed, and I love the use of prosthetics.

In the 1992 follow-up, Batman Returns, (also directed by Tim Burton) the ghastly prosthetics that transformed Danny DeVito into The Penguin came from the mind of legendary makeup effects artist Stan Winston. Though Winston might be the big name behind The Penguin’s design, other artists made critical contributions to the final effects. The look the artists created turned one of Batman’s more comedic villains into someone truly memorable and horrific.

Key SWS concept artist, Mark “Crash” McCreery, drew the initial concept design of The Penguin. He exaggerated DeVito’s nose, altered his neck and hairline, and added a monocle to complete the transformation. From there, John Rosengrant and Shane Mahan, the co-founders of Legacy Effects, experimented with numerous nose shapes which were applied to a lifecast made of DeVito. 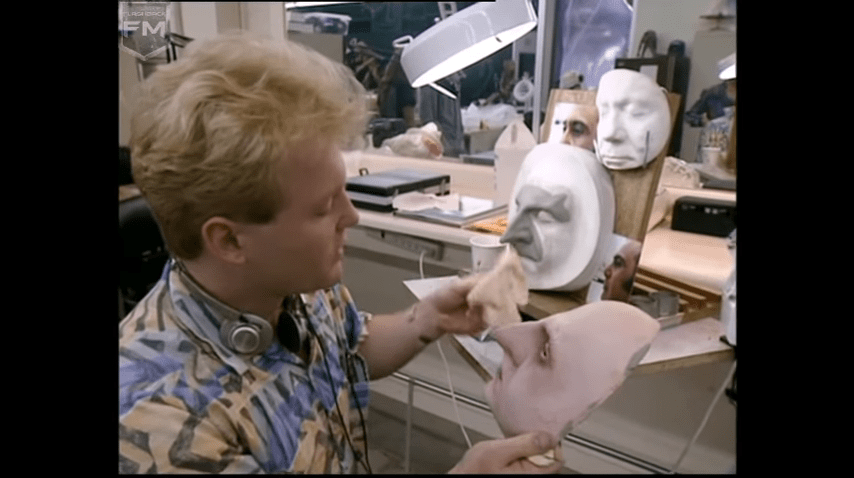 Winston took Rosengrant and Mahan’s designs and sculpted Penguin in clay. He admits that the pointy nose was inspired by crow characters he created for The Whiz. These characters used whole forehead and brow prosthetics. Similar prosthetics would be used for DeVito’s make-up. In makeup, each prosthetic is known as an “appliance.”

The building of the final makeup was overseen by Rosengrant and Mahan and a test was conducted to see if DeVito could still be expressive through the prosthetics. When that was successful, Shane Mahan took the Penguin facial features and refined them into DeVito’s lifecast with more emphasis on DeVito’s facial structure. 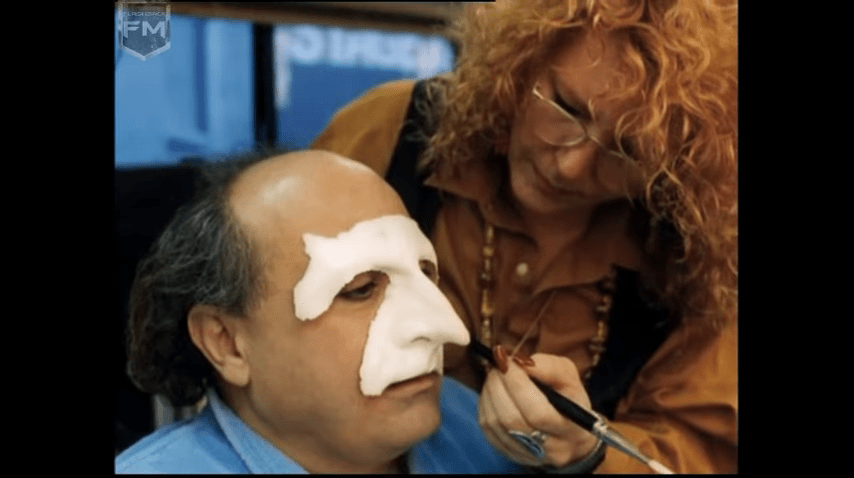 Ve Neill applied the makeup, as she had on another of Tim Burton’s films, Edward Scissorhands, but even with the help of a professional, the application was not always comfortable for the actor.

Ve Neill would stand next to me with a clear beaker of liquid that had to be cold because it was glue. It couldn’t be warmed and I knew that, and she would stand there with her brush just waiting. I would have tea, and then there would be this moment when I put the tea down and she would start. That first cold brush of glue all around my nose.

The eyebrows were glued down. Then Neill would make sure the nose was well situated.

The edge of the appliance had to be blended into the actor’s skin to look seamless. It can be difficult because it was opaque and skin is translucent. So a makeup artist has to paint the translucency into the prosthetic.

DeVito was fitted with upper and lower false teeth. Neill mixed up a concoction of mouthwash, and red and green food coloring:

Which kind of comes up like a really yucky greeny-black color. We kind of decided that it was some sort of bile.

In addition, DeVito’s head was shaved, and a hairpiece was added by hair supervisor, Yolanda Toussieng. His hairline ended up being much further back.  To the hair was added grease which makes it spindly and greasy.

Danny wore these appliances on his hands which was actually kind of a glove without a thumb… They had little fingernails on ’em and he had his thumb so he could hold onto things. And they were foam latex so they were very pliable. 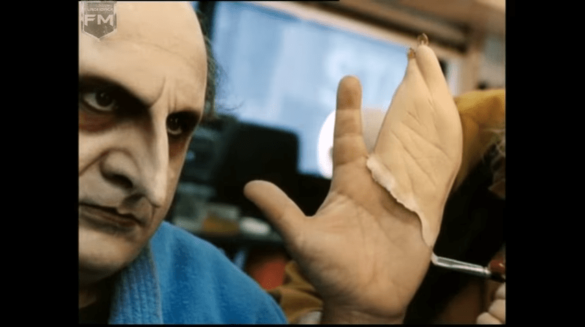 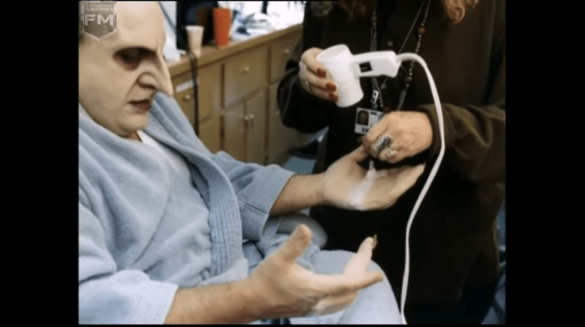 The physical transformation helped transform DeVito into the character even when he wasn’t on set.

I was not talking to Danny DeVito [between takes]. The Penguin was there and he was scary.

No one would talk to Danny on the set because he scared everybody. I don’t know if that was his usual way of working, but there was a point where he just clicked into it and was completely this character who was totally antisocial, who had been out of the loop a little too long. Danny was 100 percent into the transformation. With the makeup and all, it was a complete creation.

DeVito’s Penguin is one of my favorite makeup transformations in a Batman movie. I’m a huge Tim Burton fan and the look of The Penguin has such a dark, gothic horror look, like so many of Burton’s characters.