Batman: The White Knight writer and artist, Sean Murphy, has announced details of his follow-up series titled Batman: Beyond the White Knight.

Beyond the White Knight is the direct sequel to both The White Knight and Curse of the White Knight. At the end of the Curse, Bruce Wayne publicly revealed his identity and surrendered himself to be incarcerated in prison. Now Beyond will flash forward 10 years where Gotham is now Neo-Gotham from the Batman Beyond television show.

‘Beyond the White Knight’ and Neo-Gotham

Readers can expect a Neo-Gotham that is similar to the Batman Beyond show but with other sci-fi influences thrown in. Murphy on the look and inspiration of Neo-Gotham.

This series is designed to check all the boxes of what readers love about Batman Beyond. But it also plays with some of the pieces in different ways, reinventing some of the characters and taking a different approach on a few of the plot points. The idea is to make is unique but familiar. Not only are there influences of the Dark Knight in there, but also ‘Blade Runner’ (duh), ‘Spider Man 2099’, ‘Ghost in the Shell’, and a dozen other things.

When I was a kid watching ‘Batman Beyond’ I thought, ‘How did Gotham evolve so much in Bruce’s lifetime, from black and white TVs to flying cars?’ While you’re not supposed to really ask stuff like that, it’s a White Knight tradition to use ‘real world thinking’ to enhance Batman’s fictional world, making it more believable.

In this case, Gotham is able to evolved relatively quickly into Neo-Gotham because Bruce gave his fortune away at the end of the last volume, and this influx of money (resources, social programs, etc.) changes everything. But not in the ways he hoped. 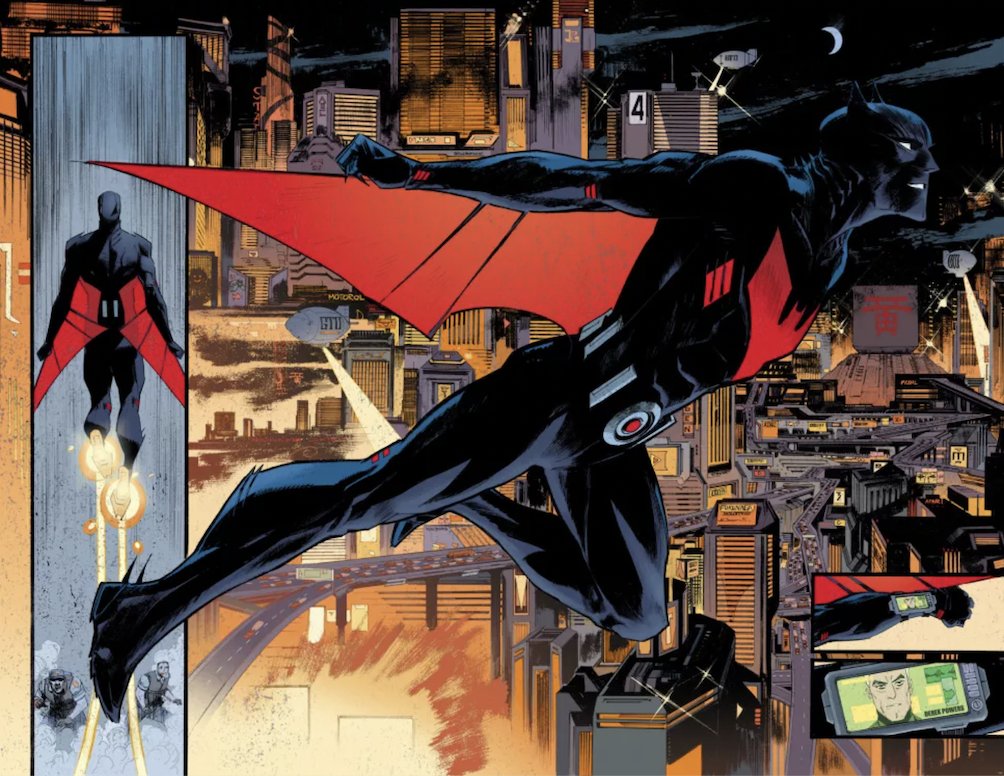 Just like in the original Batman Beyond animated series, Terry will steal an experimental Bat-suit to become the new Batman. However, unlike the animated series, Beyond the White Knight has a much more antagonistic relationship between Bruce and Terry. In fact, Terry flying around as the new Batman is one of the reasons Bruce decides to escape prison.

It won’t be the only reason, though. Bruce also decides to bust out to reclaim the Batman mantle. The GTO- led by Dick Grayson- has transformed Gotham into a draconian police state, meaning that Bruce must team up with Barbara Gordon

There’s a civil war brewing in Neo-Gotham, and it’s around this very question. On one hand you have Dick Grayson leading the GTO around in a bunch of tanks, claiming that crime is down to zero and that things have never been safer. Opposing him is Barbara Gordon leading the GCPD, claiming that the GTO has turned the city into an inhumane police state that’s caused higher rates of taxes homelessness, suicides, and depression.

Not only does Bruce see his incarceration as a way to pay for his sins, but it’s also a chance for Gotham to move beyond Batman. When he sees the effect Batman’s legacy still has on everyone, Bruce has no choice but to escape and try to set things right. Not only is he out to stop Dick and the GTO, but to bring down Terry in a stolen Beyond suit.

Jason Todd in ‘Beyond the White Knight’

In this universe, Jason Todd was the first Robin. It started out as a timeline error in Volume 1 (oops), but because it’s too late to go back and fix it, I’ve decided to embrace it moving forward.

Jason plays a huge part in this series – not only are he and Bruce able to patch things up, but we’ll even see him put on the Red Hood.

Harley and the Twins

There is one other plot thread that Beyond the White Knight will follow up on, Harley Quinn and her twins. Harley previously gave birth to the now-deceased Joker’s children. Now that the series will flash forward, the twins will be in their tweens and causing all sorts of trouble.

My wife, Katana Collins, wrote a 6-issue book called Batman White Knight Presents: Harley Quinn with Matteo Scalera last year, and one of my goals was to continue that story in Beyond. Her (and the Joker’s) twins are tweens now, and they’re starting to show their true colors.

While Bryce seems to have inherited all the good things from (Harley) and Jack Napier, Jackie’s becoming obsessed with the Joker. When Jackie discovers a massive secret about her mother and Bruce, she decides to run away. Will Bruce be able to find her? And what does Powers want with her?

Batman: Beyond the White Knight #1 will hit comic shops and digital apps on March 29, 2022.