“The Book Of Dane” 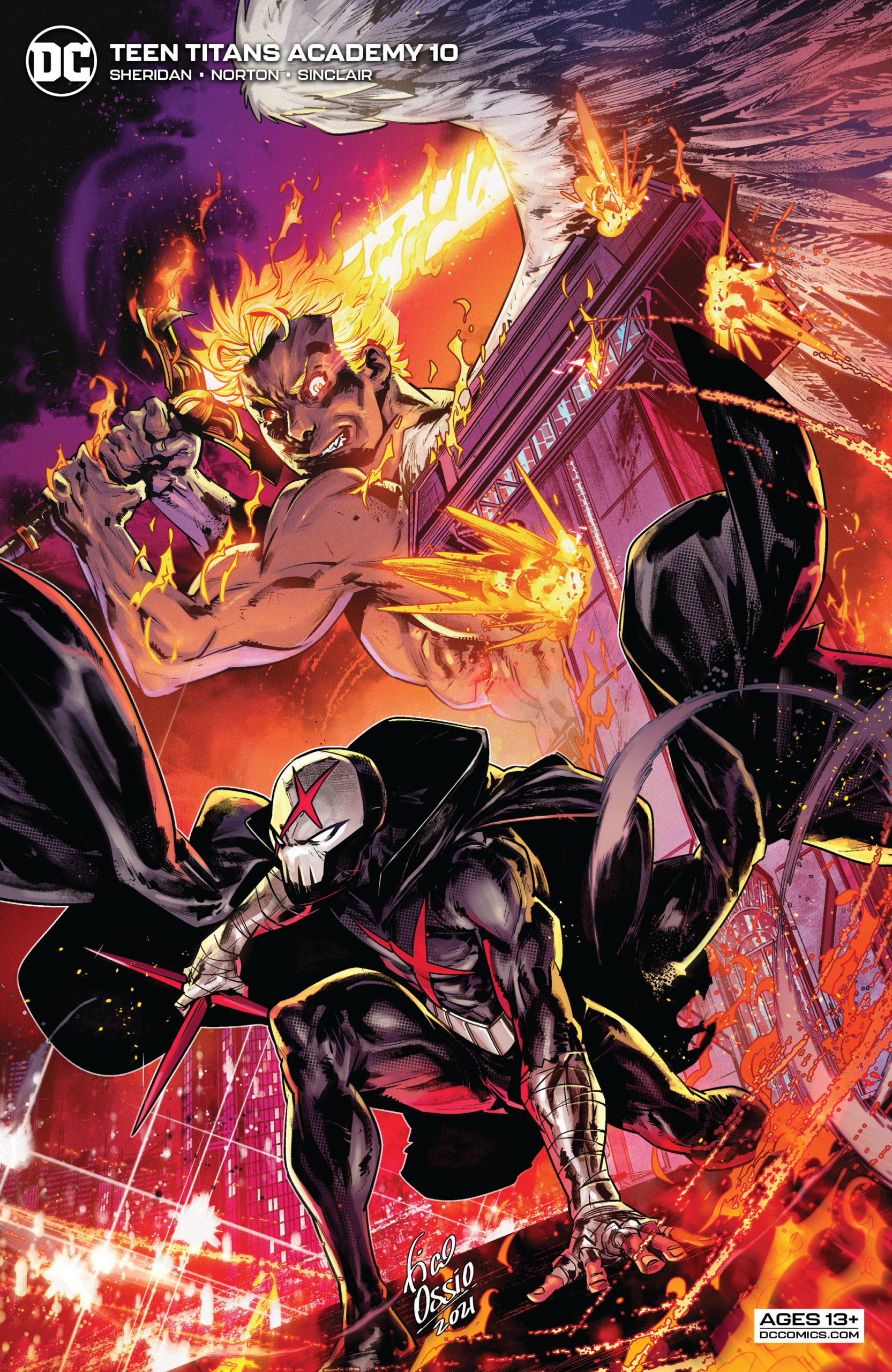 Teen Titans Academy #10: Dane, a.k.a. Nevermore, came to the academy to become a hero, but circumstance and fate are leading him down a much darker path. To understand their future, the Titans must look into the complicated past of their most mysterious student and unearth truths that may leave them with an impossible choice.

The cover ominously declares “The fall of Teen Titans Academy begins…”, which signals that big events are likely to happen in the upcoming months that could potentially lead to the future shown in Future State: Teen Titans…. or perhaps not. DC has not established whether the future shown in the “Future State” timeline is inevitable or just a potential alternate timeline.

Sheridan’s story starts with a flashback to the birth of Dane, a.k.a. Nevermore. In this scene we see him being born in an Arizona mission 138 years ago. I find this vaguely reminiscent of The Omen, which makes sense given what we learned about Dane in the Sheridan’s SHAZAM! miniseries. The events of that story also figure into this one, as the Titans receive a message from Shazam, who is in Hell with a teenage Black Adam. Billy warns them about the imminent threat posed by Dane and the revelations about his birth sound eerily similar to Raven’s backstory. That might explain why Raven had been mentoring Dane at the Academy.

Dane specifically mentions Red X’s predecessor as being the second Red X. We already know that Dick Grayson was the first, but there are some tantalizing questions about the history of the character. First, I’d love to learn more about the circumstances surrounding Dick taking on this alternate identity. Dick being Red X comes from the Teen Titans animated series, which is outside of the DCU canon. So, what’s the in-continuity story of Dick’s time as Red X? Second, who was the second Red X? Was he connected to Dick or any of the other Titans? I suspect we’re going to get some of these questions answered in the current story arc. 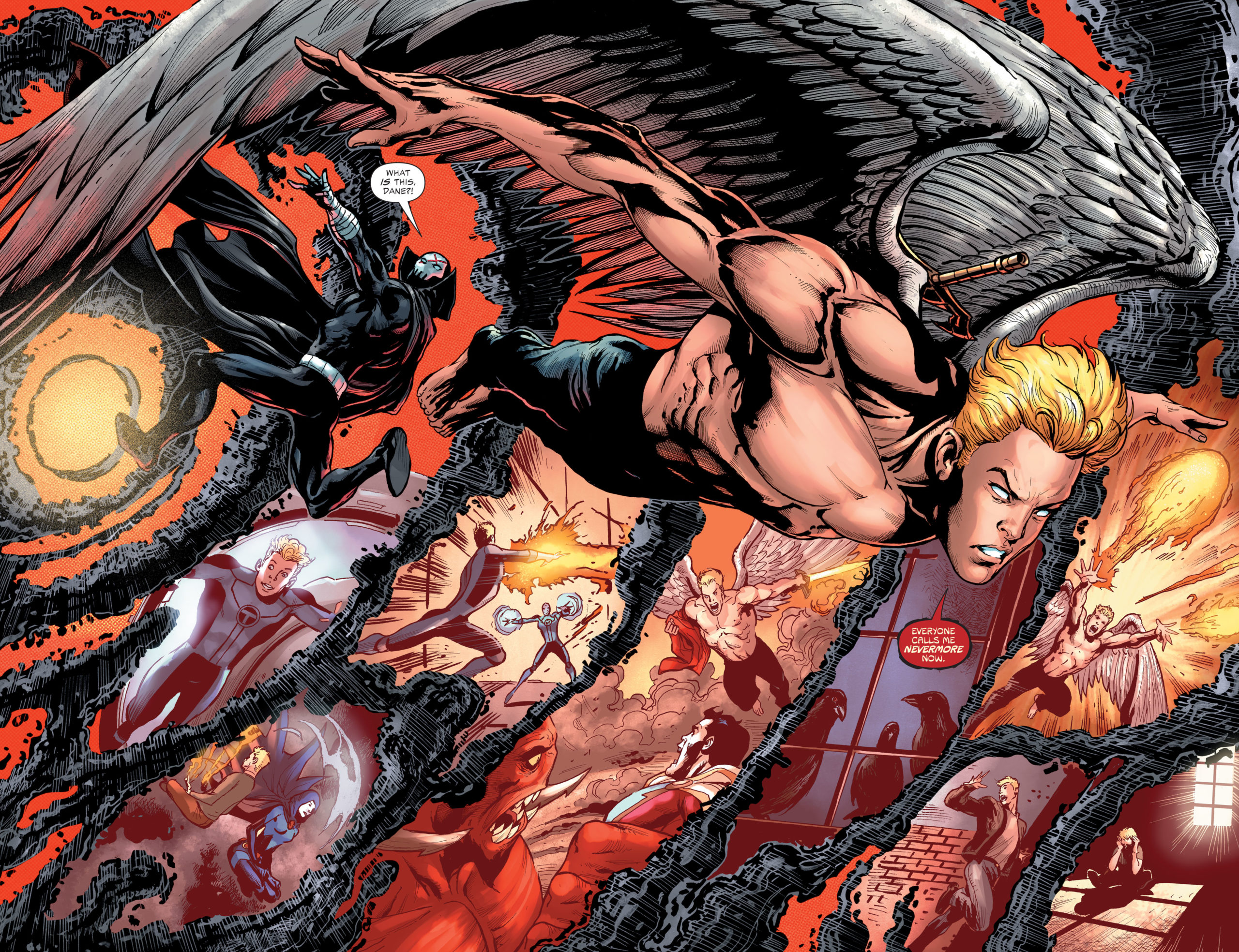 The revelation of the current Red X’s identity must be imminent. It was established in the last issue that the Titans now know who he is, and I don’t think Sheridan can keep this hidden from readers for much longer.

I love Stitch’s role in this story, especially how they speak up against the idea of using deadly force against Dane because she believes that Dane’s not necessarily evil. Perhaps she’s right and Dane can be redeemed. I’d like to believe this too, and that the future we see in “Future State” is not inevitable. While it was an interesting story, I’m not sure I want it to become the status quo for the DCU, though the possibility that it might happen does add to the excitement and suspense of Sheridan’s storyline.

I also liked how Stitch shows how unsuccessful the faculty has been at keeping their identities secret in just a few sentences:

His name’s Billy. You’re Victor, he’s Gar, she’s Kory… we live in the same building. I can’t believe you thought you could hide who you are from us!

Well, so much for secret identities.

I was sorry to see that Wally and Garth didn’t stick around for this issue. However, there is a mention that they both are searching for Dane and Red X. Perhaps they will be returning after their search. The good news is that Teen Titans Academy #10 is another great story from Tim Sheridan, and the artwork from Mike Norton and Tom Derenick is superb. Sheridan’s shifting his story into high gear and it looks like the upcoming issues are going to be a Hell of a ride.