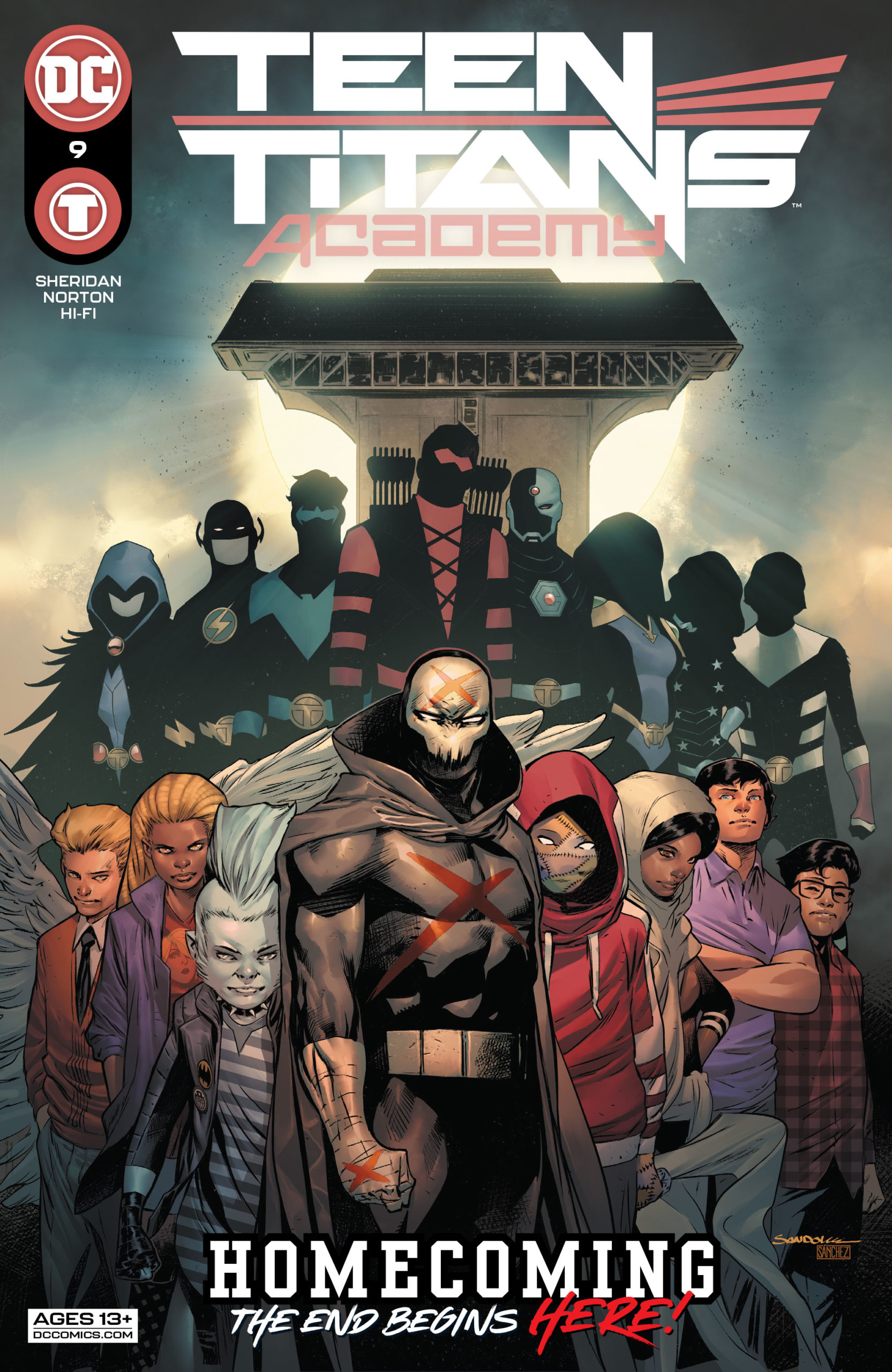 In Teen Titans Academy #9, Homecoming continues! It’s a time for reunion and reflection, and the shocking news that Roy Harper’s alive has left the Titans, and the Flash, with plenty to reflect upon.

As old wounds are ripped open, the Academy’s very existence is called into question, leaving the futures of its vulnerable young students up in the air and exposing them to the fury of an old foe out for vengeance!

This issue features a moment that I’ve been waiting forever since Roy Harper was resurrected, in the pages of Infinite Frontier; the reunion of Roy and Wally West. Wally recently learned in The Flash 2021 Annual that he wasn’t really responsible for Roy’s death during Heroes In Crisis. While this gave him some closure, he still wasn’t able to save Roy. While King’s miniseries was powerful, in the eyes of many fans it damaged one of the most beloved characters in comics. Thanks to Joshua Williamson, Jeremy Adams, and Tim Sheridan, that damage has been fixed.

Add to all this the reappearance of Tempest, and we get a full reunion of the original Teen Titans lineup! This really is a Homecoming celebration. I was quite pleased to see the school’s faculty feature prominently in this issue, as the main focus over the last few issues has been centered on the new students. While those were great stories, it did leave me feeling like we weren’t getting enough of the OG Titans. I’m sure Sheridan will manage to give the faculty, students, and upperclassmen a fair share of the spotlight as the title progresses. 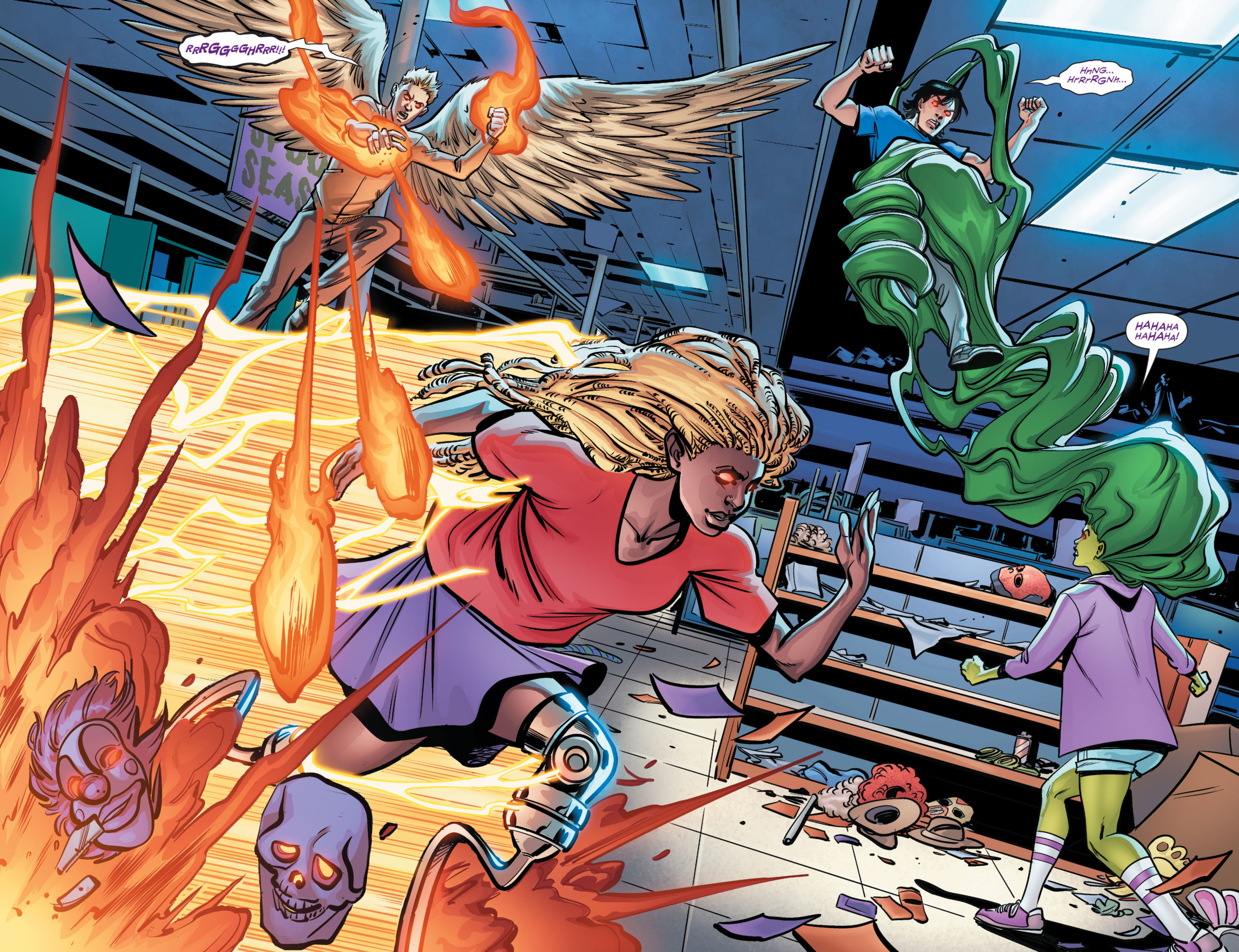 I noticed in an earlier issue that Gar was referred to as Mr. Changeling, and wondered if this was an official change or a mistake. Roy also calls out, “Hi, Mr. Changeling” in this issue, which seemed to verify this as a deliberate change. Tim Sheridan was kind enough to clarify via Twitter that Gar has indeed reverted to his Changeling identity from Beast Boy. He explained, “The biggest reason is that he’s just not a boy anymore – and ‘Beast Man’ was already taken by [Masters of the Universe]”.

This makes sense, although I’m happy with either codename. Beast Boy has connections to his time in the Doom Patrol before his time on the Titans, while Changeling hearkens back to the New Teen Titans. Both are tied to important eras in DC history, and it makes sense that he would want to drop the “Boy” now that he’s older.

We also see some significant developments with the students, as Psimon attempts to enlist a new Fearsome Five, comprised of Nevermore, Matthew Price, Bolt, Tress, and Red X. This issue pretty much confirms Red X is one of the students, as Raven confirms that five students are missing, not four. It would appear that the secret of Red X’s identity is close to being revealed.

I can’t really find much to complain about this issue. This series has been stellar so far, and Teen Titans Academy #9 is my favorite issue yet. I do have one question though. At one point, Gar appears to be eating a Double Bacon Bomberz burger. Isn’t he supposed to be vegetarian?

Tim Sheridan’s direction for the Titans has made Teen Titans Academy one of the most exciting titles of the Infinite Frontier era. The threads he has been laying since Future State: Teen Titans are coming together, and I look forward to seeing where all this leads in the months ahead.