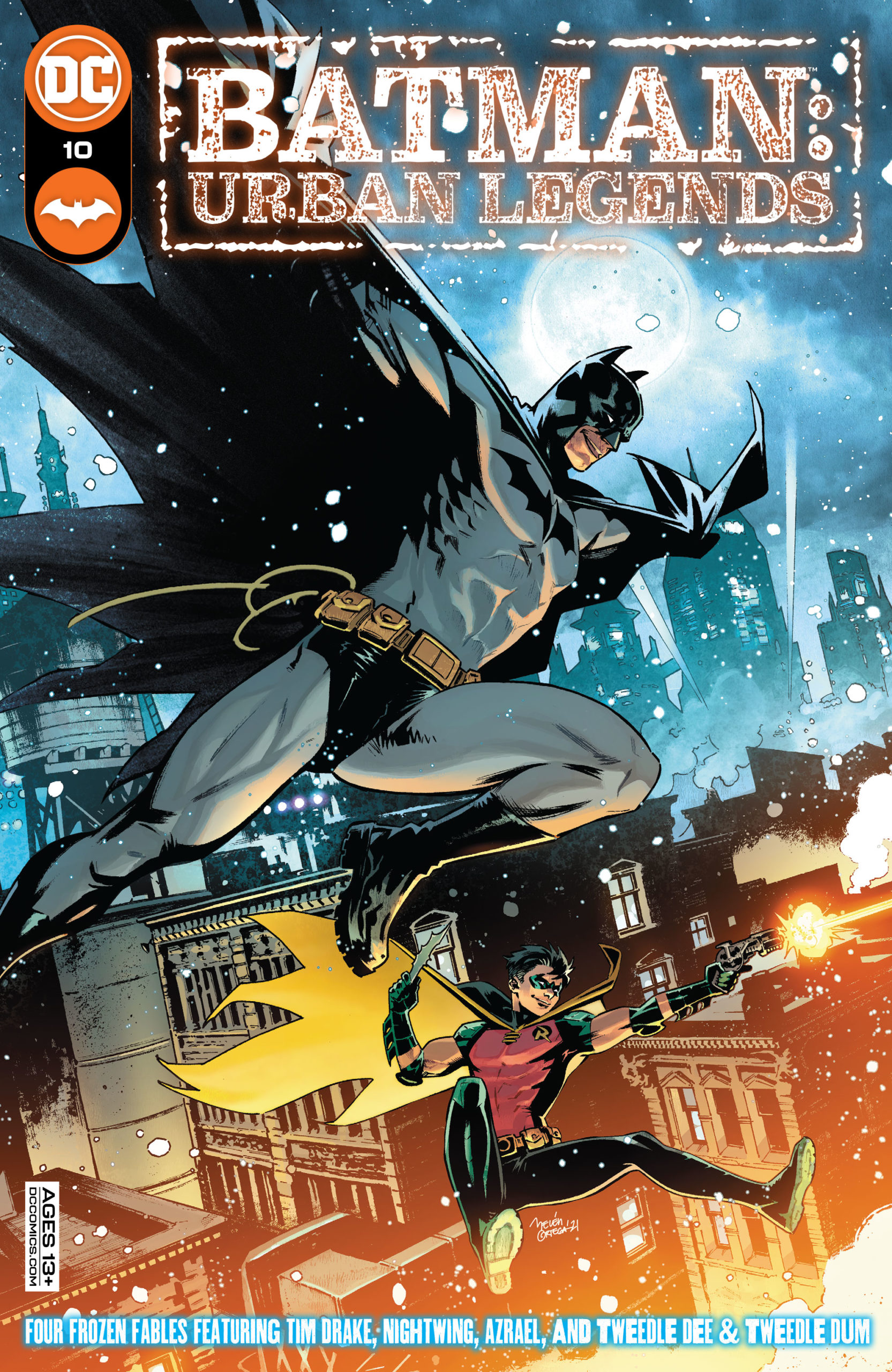 The holidays are here, and Batman: Urban Legends is bringing the festivities to Gotham with the tenth installment of the always interesting Bat-centric anthology series. Batman: Urban Legends #10 concludes the stories of Tweedledee, Tweedledum, and Azrael, and features Tim Drake and Nightwing in two winter holiday one-shots for an issue puts the reader in the festive spirit.

Meghan Fitzmartin’s  “A Carol of Bats,” features Tim Drake, as it follows his momentous coming out back in issue #6. The three-part story we saw in that story explored Tim’s identity, and this chapter continues the trajectory of giving him the most character development he’s had in years, by showing what that means to try to have a personal life in relation to being Batman’s Robin. Sadly, I almost feel like Tim’s story is sadly being overshadowed by Tom Taylor’s work in Superman: Son of Kal-el.

Sam Johns’ “Down the Rabbit Hole,”  concludes Tweedledee and Tweedledum’s two-part story and takes a deeper look at what happens to the detrimental state henchmen are left in without a boss. Tweedledum attempts to save his brother Tweedledee while staying away from his criminal past, giving us a sincere story about brotherhood.

Johns provides a ground-floor look at all angles of villainy and being a citizen of Gotham City, while Karl Mostert’s art, combined with David Baron’s colors, provides an interesting combination for this story.

Dan Watters’ final part of “Dark Knight of the Soul” reveals the intentions of the Poor Fellow, Azrael’s latest adversary, and a final battle between the two. Nikola Čižmešija’s art and Ivan Plascencia’s colors are worthy of being presented in an art gallery. This story lends more to deepen Azrael’s arguable struggle in being an “anti-hero” in the Bat-Family.

What’s a Holiday without Nightwing?

“The Bats of Christmas Past” wraps up the issue with some classic hero vs. henchman action. Writer Tini Howard’s Urban Legends debut is a Dickens of a Tale (see what I did there) as Nightwing takes on the role of Scrooge when he encounters his own three ghosts of Christmas, after a hefty dose of Scarecrow’s fear toxin.

Howard infuses the right amount of charm and winks that make Dick one of the hottest characters in DC. Way to stick to a winning formula!

What a Present Under Our Trees

Batman: Urban Legends #10 continues to be quite the playground for all things Batman-related. Each story’s different but continues to weave a thread of connection among the Bat-Family. I appreciate this title so much as there’s a lot to explore with each character.

This book is as needed as The Brave and the Bold was when I was a child!