“The Haunting of Titans Tower” 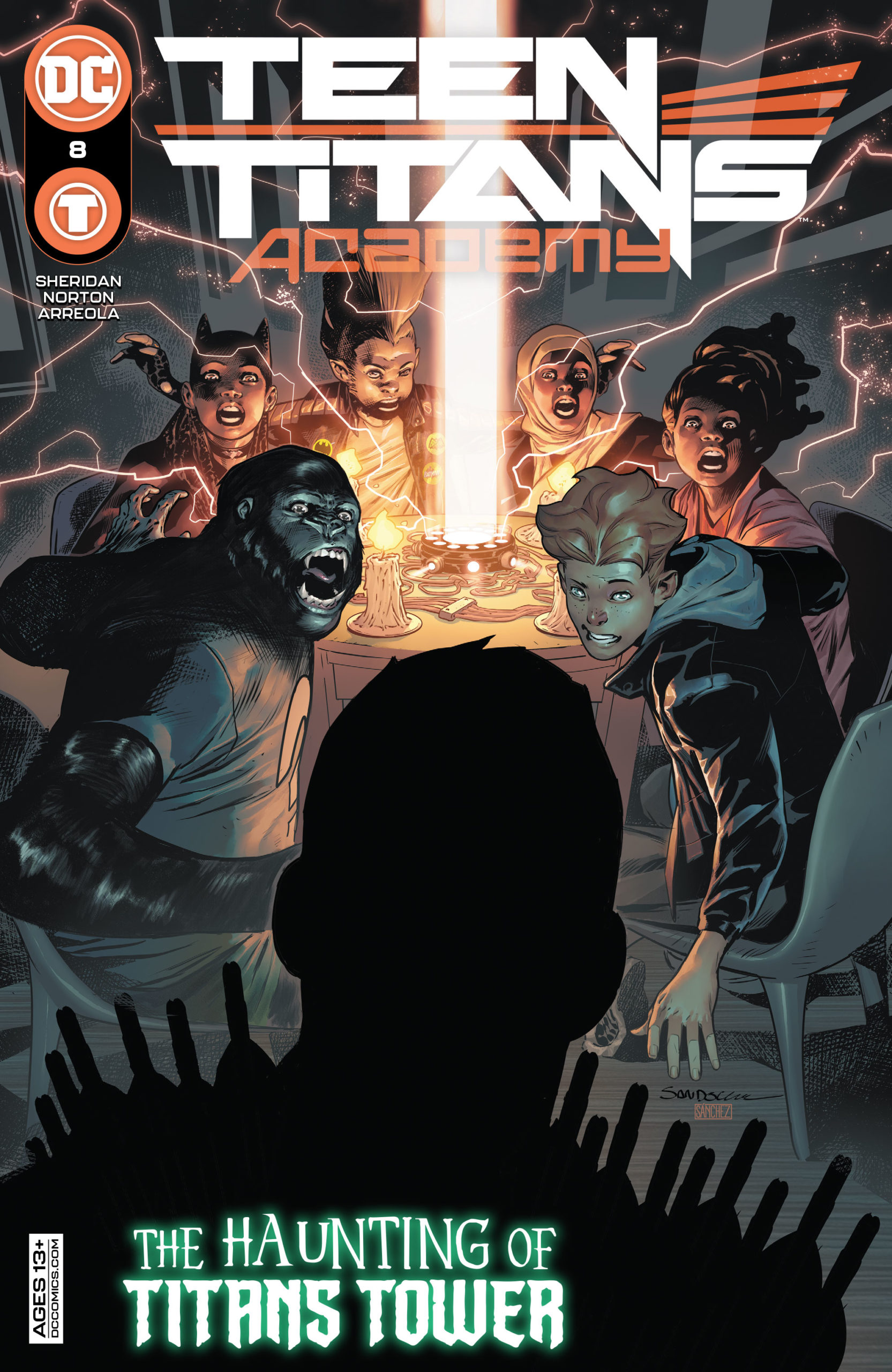 It’s Halloween at the Academy, which means homecoming is fast approaching! With the freshmen excited about getting in touch with their spooky sides, the faculty, once again, grapples with the scary threat posed by their rogue student, the mysterious Red X. Luckily, this time, the Titans have help from some old friends who have, at long last, come home. Welcome to Teen Titans Academy #8.

There are two guest appearances I’ve been hoping for and Tim Sheridan delivers both of them in this issue; two founding members of the Teen Titans, Wally West and Roy Harper. Wally has recently resumed his super-heroic career as seen in The Flash, and Roy has recently returned to the land of the living, as seen in the pages of Infinite Frontier. 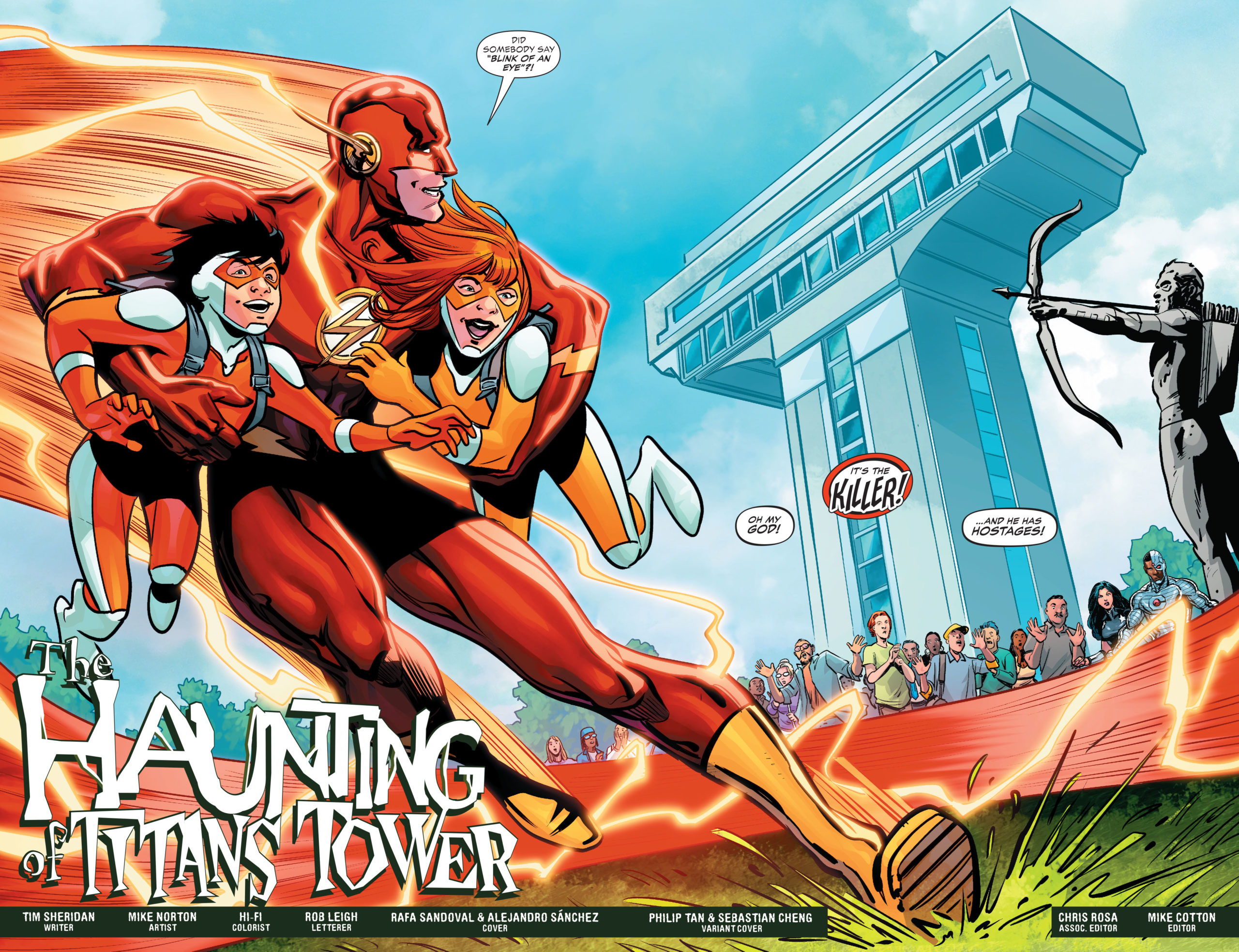 In this issue, prospective new students are visiting the school, and Wally brings his kids Irey and Jai to check it out. Unfortunately, his presence causes a bit of a stir, as some of the other parents still believe that Wally’s guilty of killing Roy. It appears that the real circumstances of Roy’s death are not yet public knowledge in the DCU. Wally should really look into getting the word out about that.

Until his appearance at the very end, it appears that not even the original Titans know about Roy’s resurrection. In fact, a good part of the story centres around the junior students attempting to summon Roy’s spirit in an H-Dial powered séance. They state that they want to get Roy to answer some questions, but it’s not clear what answers they’re seeking? Are they wanting to know more about Roy’s death?

It’s an interesting idea to use the H-Dial to summon a fallen hero’s essence, considering that the H-Dial’s function is to summon heroes from the Heroverse. However, instead of summoning Roy, the dial nearly succeeds in summoning four other beings. From their outlines, it looks like four other fallen Titans. I’m pretty sure two of them are Kole and Terra, and one I’m guessing might be Phantasm. The fourth however, appears to be Hawk – but is he dead? I didn’t think so.

However, the ritual is interrupted before they can completely materialize, so apparently no harm was done. Or was it? Did the students somehow awaken the restless souls of the Titans’ deceased members? I have a feeling that Sheridan is hinting at something dark looming in the future that involves these spirits.

Even though the séance failed to summon Roy, it still ends with Roy’s return, as he picks that exact moment to make his appearance. Unfortunately, this is where the issue concludes, so we will have to wait until next month for the actual reunion between Roy and his old teammates.

I was pleased to see a couple of interesting new faces among the prospective new students. The titular characters from DC’s younger readers graphic novels Primer and Whistle both make their in-universe debuts. It’s unclear if they will become students at the Academy, but they would make great additions to the cast. Even if their appearance is no more than a cameo, it was cool seeing these graphic novels intersect with the canon DCU.

It’s possible that the outline of Hawk might be an artistic error, but it might be deliberate. I wonder if it was meant to be the original Dove instead, who definitely is dead. But if it was supposed to be Hank Hall, then I hope Sheridan clues us in on why he’s not among the living. Some clarification one way or another would be appreciated.

Teen Titans Academy #8 was another fun issue all around, but the highlight is seeing Roy and Wally guest-starring. I can hardly wait until we they have a proper reunion with each other and their old teammates in next month’s Homecoming issue.