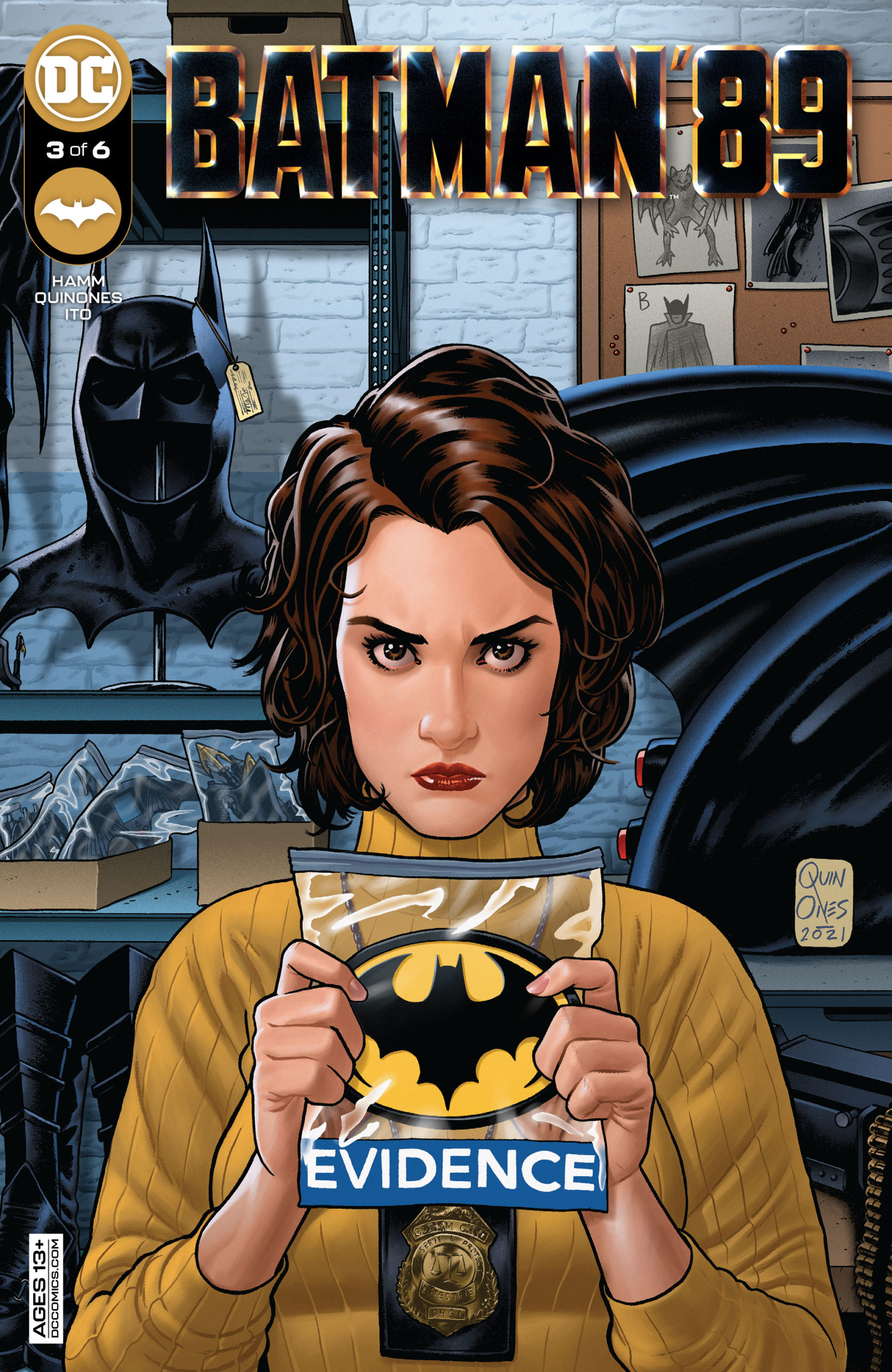 Batman ’89 #3 takes another step back into the Gotham of Tim Burton’s seminal, classic Batman movies! The movie screenwriter, Sam Hamm (Batman, Batman Returns), and artist Joe Quinones (Dial H for Hero) pull on a number of threads left dangling by the prolific director.

Listen… I’m a cop, you can talk straight to me. What are his chances?
– Barbara Gordon to the Paramedics tending to Harvey Dent

As the fire rages at Royal Auto, Harvey Dent lies trapped inside, unconscious and in danger. Can Bruce Wayne get to him in time, or will the district attorney leave burned, in more ways than one?

The story stems from a repeated theme of tragedy in a minority neighborhood where a local hero tries to make things right. I cannot tell you how glad I am that Billy Dee Williams’ character of Harvey Dent is being celebrated at the forefront of these issues. It’s almost like a wrong’s being made right, as many fans craved to see this character more in the cinema. However, getting to see Williams’ portrayal through Hamm’s script and Quinones’ pencils really is wonderful!

Bruce is correct in trying to avoid the spotlight, but he arguably cannot get out of the way of himself. Although he’s still a rookie in some ways in this world, and his wealth is viewed as both eccentric and arguably not welcome in Harvey’s neighborhood. Hamm places Bruce in a fish out of water atmosphere that Batman’s not used to, regardless of the year.

Quinones’ lens continues to impress, as his renderings are a total homage to the era and the movies that Burton gave us once upon a time. I’m trying to see who his muse is for Barbara Gordon’s look though, as she wasn’t in the films.

This is a real story; no superpowers, just a man who wants to make a difference… a man who’s driven, and we’re talking about Harvey Dent. Is it tragic? Yes. Does it resonate in today’s world? Absolutely. Quinones and Hamm take the 1989 Burton background and flip the script by making the story so topical. It’s got an ’89 vibe with a 2021 feel. That’s hard to do, but this team’s achieved it!

Is there more landscape to explore in this new/old cinematic Batman landscape? It feels like there is, as some of the themes resonate from 1989 to 2021. Do I want to see more? Yes! The only negative is the cover numbers, as they’re ticking down… 3 of 6. Sigh.

I already want the remaining issues! With Batman ’89 #3, Sam Hamm and Joe Quinones hit all the right notes. Clayton Cowles letters like the pro he is and Leonardo Ito splashes that 80’s vibe that we so wanted across the pages!

I also drank in Catwoman making her appearance in this issue, but it’s rare to see Batman! That’s the uniqueness of this storytelling, as the cinema also hid Batman until specific parts of the movie. Quinones and company are doing the very same thing, and it works!