“The Biggest Score Ever” – Part One, and “A Knight Reborn” 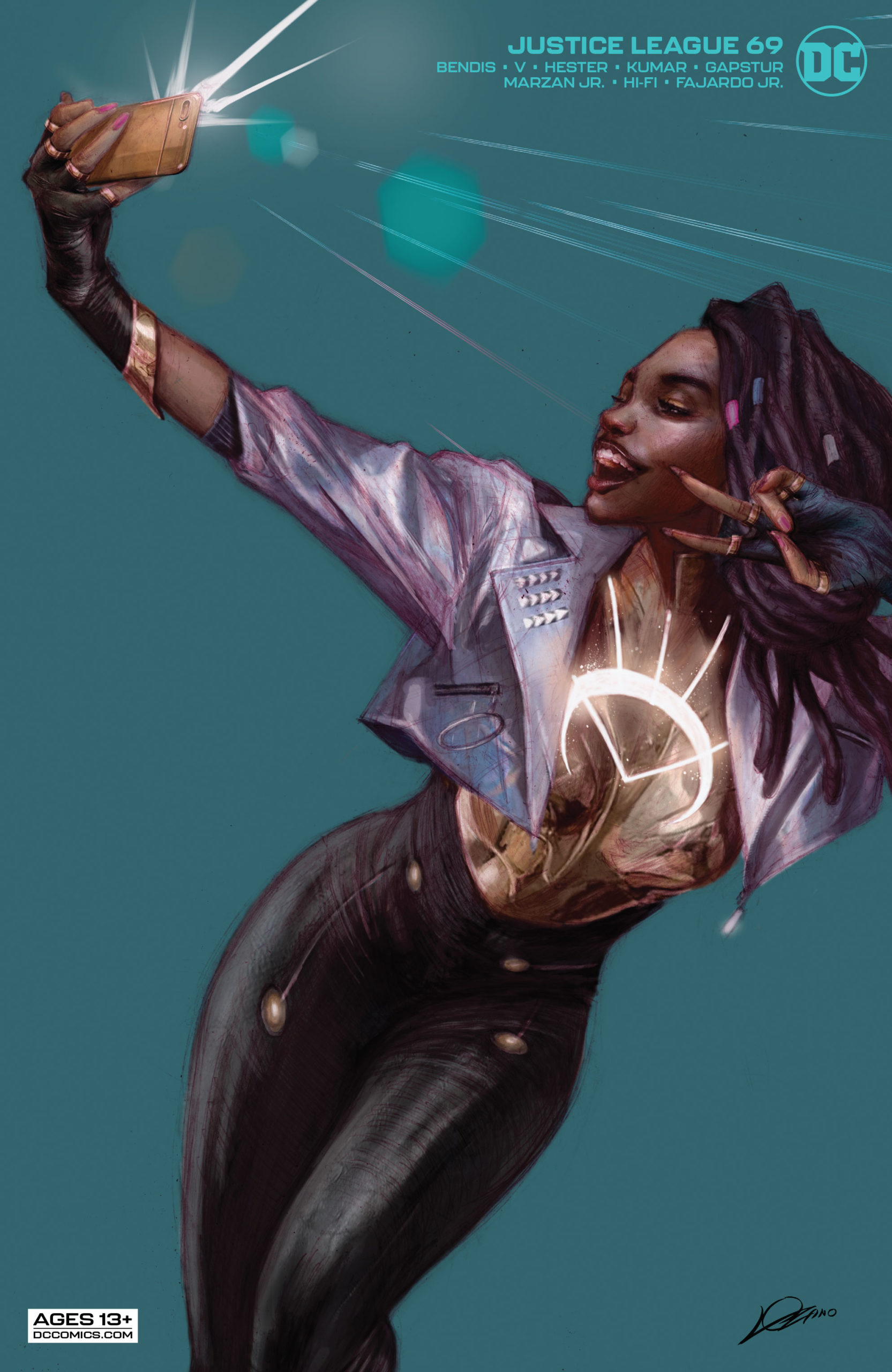 The League and Checkmate team up to investigate a terrorist group of fake Deathstrokes in this week’s long-awaited Justice League #69.

Spinning out of the subplot from the previous story arc, the issue focuses on the connection between the Justice League and Checkmate: Green Arrow. In issue #65 Oliver Queen and Black Canary were approached for help by Sam Lane, Lois’ brother. Sam (aka Daemon Rose) is an ex-ARGUS agent who is on the run from a group of faux Deathstrokes. After fending off the wannabe assassins, Green Arrow, Black Canary, and Sam scurry off to help the League in their fight against Synmar Utopica.

Now that Utopica has been banished to the Phantom Zone, the League turns its attention to this Deathstroke mystery. While investigating they not only stumble across the aforementioned group of poser Deathstrokes, they also meet Checkmate. As it turns out, Green Arrow failed to disclose to the League that he’s been stepping out on the team, moonlighting with Checkmate since Mr. Bones reformed them. Despite the tension, the two teams work together to uncover the mystery behind team Fakestroke.

One of the critiques often leveled at Brian Michael Bendis is his pacing. The industry veteran is known for his decompressed storytelling. As I mentioned in my previous review, Bendis’ previous arc really struggled with that very issue. However, it’s not as if he doesn’t know how to get the ball rolling, as is clearly evident in his issue. Seriously, I’m expecting that some readers are going to need to be hospitalized due to whiplash because Bendis’s script shifts from first gear directly into fifth. Plot beats roll at a breakneck speed, as the writer treats his readers to a montage investigation sequence. It seems to have been designed to introduce a new set of villains, thereby setting up not only the next few issues but assumably the Justice League vs Checkmate event that’s in the pipeline.

On a different note, I would be remiss if I didn’t note that this issue is three weeks late. Seriously, Justice League #68 dropped on September 27, and the next issue hit the shelves today, November 16. For those of you who (like myself) suck at math, that’s seven weeks. This begs the question – what happened? Did Bendis get abducted by aliens or something? The radio silence has been deafening, and I can’t help but wonder if there was some sort of drama going on behind the scenes that caused this delay. Whatever the reason, DC needs to get its ducks in a row. Justice League is a marque title that is supposed to be setting up a major crossover. Slow rolling this book is only going to cost DC money and readership, as readers can easily lose the narrative thread and thereby interest. 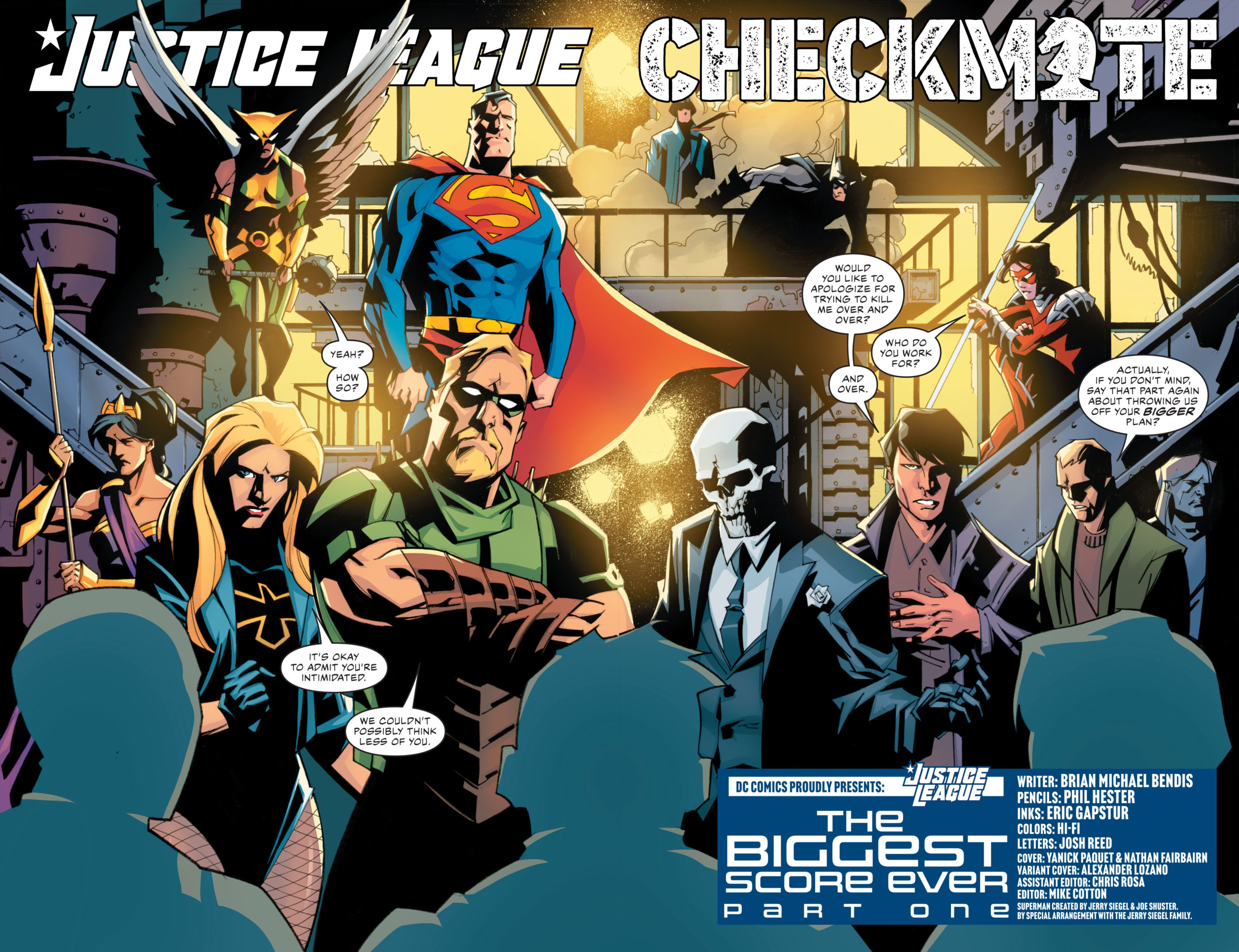 Confession: I got a little giddy when I saw Phil Hester’s name on the cover of Justice League #69.  For the past five issues, Justice League has been bouncing haphazardly between artists. Of the few that were showcased, my favorite of the lot was Hester. His work is incredibly cartoony, which seems fresh amid the endless Jim Lee copycats employed at DC.

Hester does a great job capturing tone and character with subtle details. For example, his Batman slouches thereby giving the Dark Knight a certain foreboding and curmudgeonly vibe. This, coupled with Bendis’ surprisingly fun dialogue, really creates a neat and amusing tone for the issue. It’s apparent in this issue that Hester and Bendis really work well together. I’m hoping that he sticks around for a while.

Unfortunately, Justice League #68’s JLD backup ended on a terrible cliffhanger that took seven weeks to resolve.  Zatanna became possessed by The Upside Down Man and started destroying Atlantis. (For those of you who are unaware, The Upside Down Man was introduced by James Tynion IV in the previous run of Justice League Dark as the team’s archnemesis). Picking up where the last issue left off, Merlin uses Zatanna’s transformation as cover to hightail it to an Atlantean temple, in order to accomplish his mission. While much of the team is distracted by The Upside Down Man, Aquaman goes to confront Merlin, but it’s too late. The wizard had opened a portal, summoning an ancient power that might be strong enough to destroy everything.

JLD remains to be one of the highlights of this book, as Ram V’s story manages to do a lot with a very small page count. At this point, it’s a flat-out travesty that this great strip has been relegated to the back pages of Justice League. Given the nature of Ram’s story and the size of his cast, the current form of JLD is hampering his potential. Considering the cliffhanger for this issue, this arc would have made an *excellent* crossover with Aquaman. I understand that DC is risk-averse, but Ram could have been given a limited series like Swamp Thing to tell this story. It would have been a much better format. Plus, if it sold well, it could be renewed for a “second season” or whatever. In short – something needs to change here. This story is too good to be stifled by an absurdly low page count.

Justice League #69is a giant heaping pile of meh. Bendis’ inability to maintain a level of consistent pacing is incredibly frustrating. Luckily, Hester’s pencils make the story tolerable. Ram V’s story is excellent but annoyingly brief. Overall, there are so many interesting and fun things going on in both of these stories that simply get overshadowed by the issue’s flaws.