“United Order” – Part Five, and “The Call of the Darkworld” – Part Four 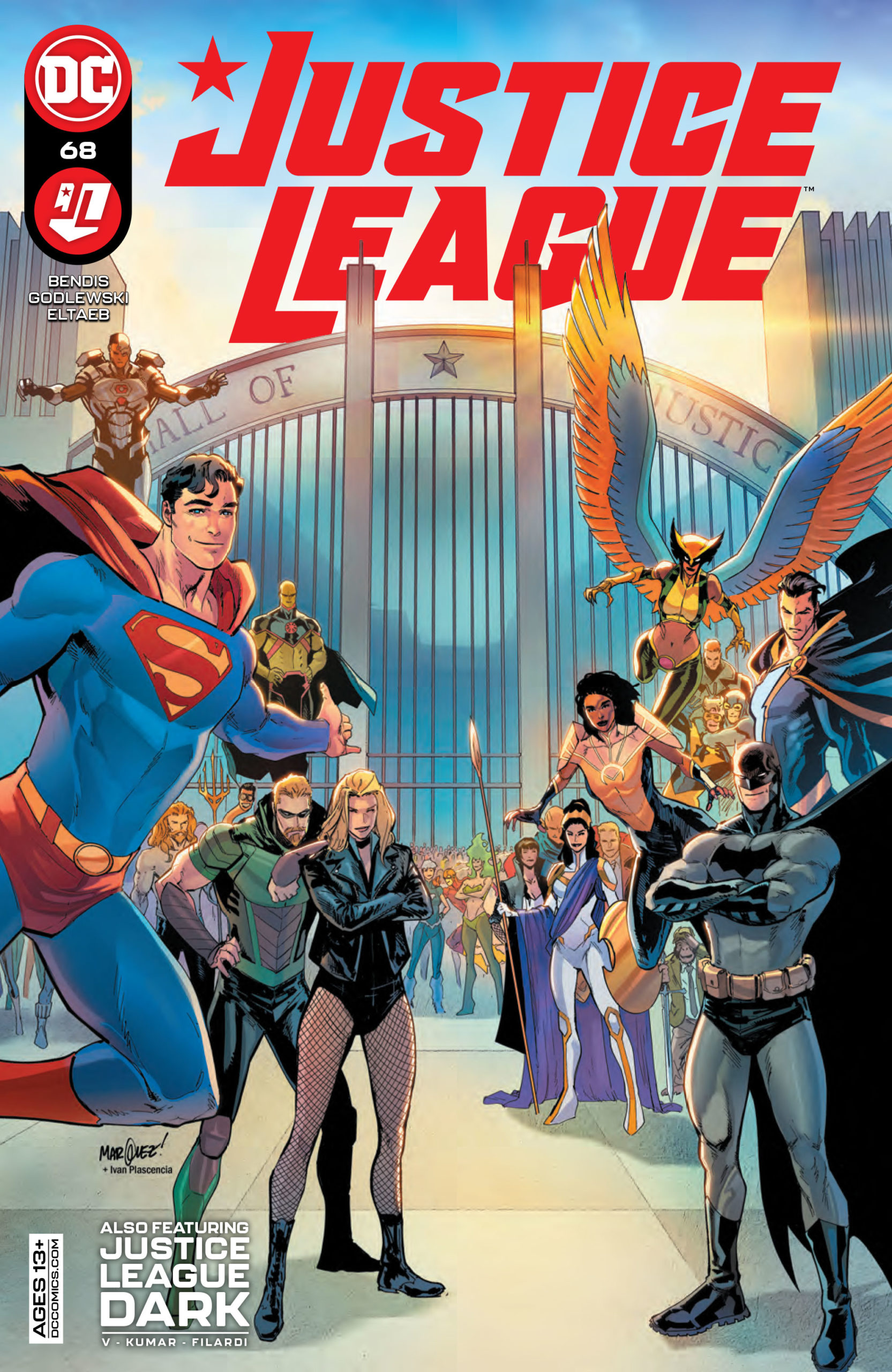 After four issues of punching Synmar Utopica, the League finally managed to defeat the alien menace by trapping him in the Phantom Zone. Before The Flash could even do a victory lap, the United Order demanded that the League hand over the Phantom Zone projector. Now – considering this whole mess was largely the United Order’s fault, having let Utopica escape custody, the League is understandably salty about this demand. So the two groups scowl at each other and part ways. 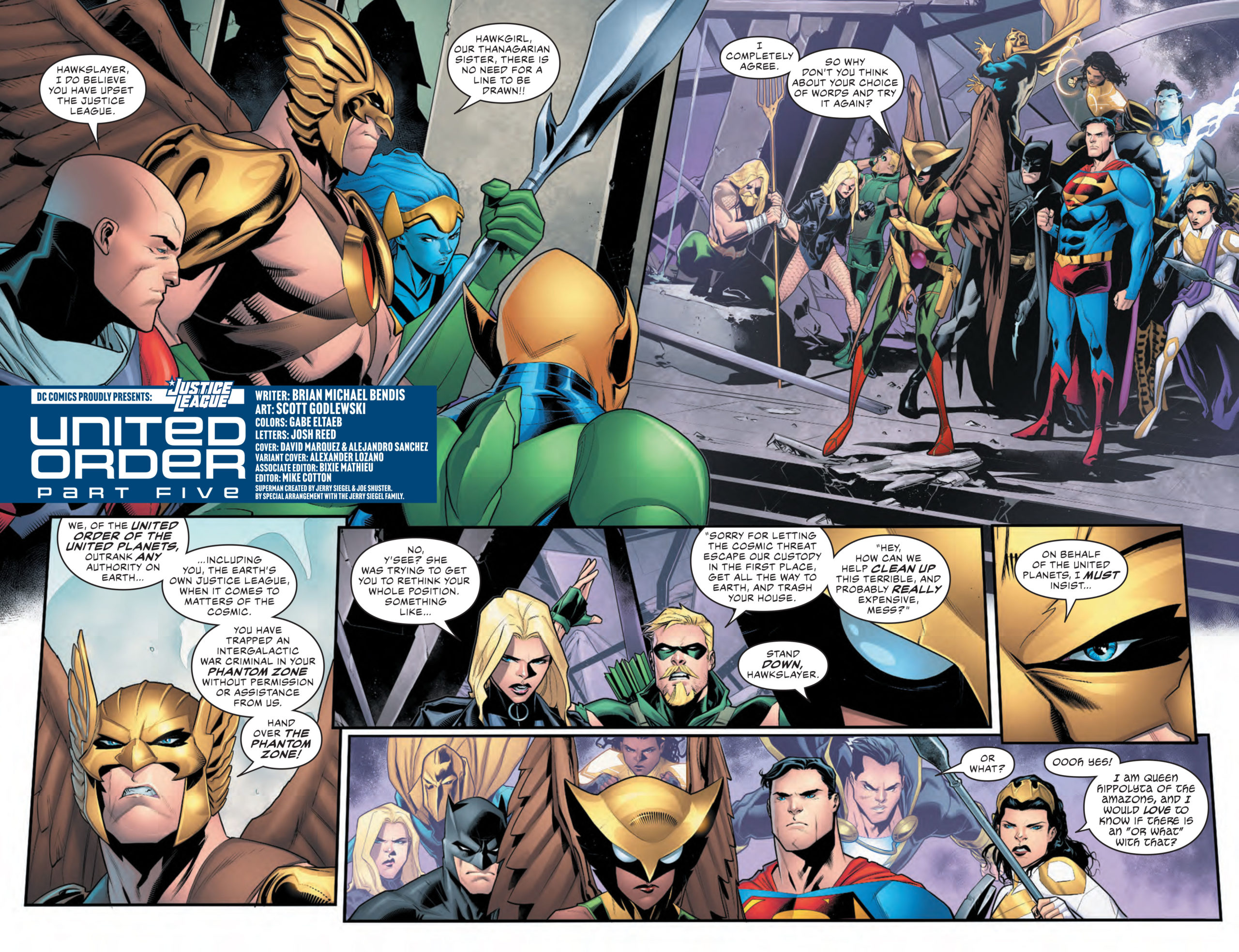 I cannot overstate how frustrating I found this issue. Bendis spent four months setting up this conflict between the League and the United Order, made a huge deal about Utopica destroying the Hall of Justice, and finally, when it comes time to explore the impact of Symar Utpopica’s earthly rampage, he simply ended the story. The two groups part ways without even so much as punching each other and the ramifications of Utopica’s destruction are rendered null.

“United Order” was nothing more than a filler arc. Bendis decided to stall for five issues, wrapping up an unfinished, inconsequential storyline from his Superman tenure, while seeding the Justice League/Checkmate crossover with a ham-handed subplot.

This storyline had the potential for some interesting implications. Bendis could have pivoted and had the League brawl with the United Order and potentially pull in the Legion of Superheroes as an interesting time-travel storyline. He could have explored the repercussions of the destruction of the Hall of Justice, and he even hinted at doing so. Instead, though, he took a hard pass. It seemed that Bendis was so focused on what was coming next that he didn’t bother exploring the story he was currently writing, which left a very bitter taste in my mouth.

For the record, I’m not an individual who dislikes Bendis. I loved his work on Daredevil, Avengers, Ultimate Spider-man, and even Superman, but bad storytelling is just bad storytelling. Bendis is an industry veteran, and I feel like I just wasted five months reading this book. Oh, and as a side note, this issue in no way reflects the preview. At this point, it’s become obvious that Bendis is freewheeling. There’s a problem here that really needs to be addressed.

Once again, another artist rotates into Justice League. This month, we say goodbye to Phil Hester, and say hello to Scott Godlewski. Do not misunderstand me here – Godlewski’s work is perfectly fine. His art’s animated, sleek, and detailed, but over the past five issues, Justice League has featured three different pencilers.

One of the nice things about the Snyder/Tynion Justice League run was its artistic consistency. With the exception of the Aquaman crossover, the Snyder years had a handful of artists that rotated on the book with Jorge Jimenez as the anchor artist for the series. It worked. I was hoping that the Bendis era would be similar, especially since the title was returning to a monthly schedule and because David Marquez drew the entire first arc. Alas, Bendis seems to change artists like the majority of us change underwear. Frankly, I find this distracting. In my humble opinion, story arcs should have a consistent aesthetic from start to finish, unless there’s a damn good reason for things to change. Otherwise, such shifts can easily jerk a reader out of the story, creating a disjointed experience – especially for those who are binge-reading.

The JLD continues to square off against Merlin, who has now summoned an army to invade Atlantis in search of the Alchemist Stone. The back-up culminates with Merlin going toe-to-toe with Zatanna. This story ends on a gnarly cliffhanger that harkens back to the previous JLD run.

Look – this story is good, but I’m getting very tired of reading it in such small chunks. There’s too much going on and not nearly enough pages to explore these concepts in any depth. There are a ton of characters that can easily get lost in the shuffle despite Ram V’s best efforts. I like what Ram’s doing with JLD, it’s awesome… BUT FOR THE LOVE OF ALL THINGS GOOD, PURE, AND RIGHTEOUS – GIVE THE MAN A FULL BOOK TO TELL HIS STORY!

Final Verdict: Be prepared to pull your hair in frustration.