Just like last issue, I Am Batman #3 is labelled as a “Fear State“ tie-in, despite the fact that this series is set several years after the event currently running through the Bat-Family books. Even though Seer and Simon Saint have a small part in the story, I don’t think that’s enough to justify branding it as part of the crossover. I suspect that the real reason is to give I Am Batman a boost in sales. Hopefully that doesn’t mean that the book isn’t selling, as it would be a shame if it got cancelled prematurely. 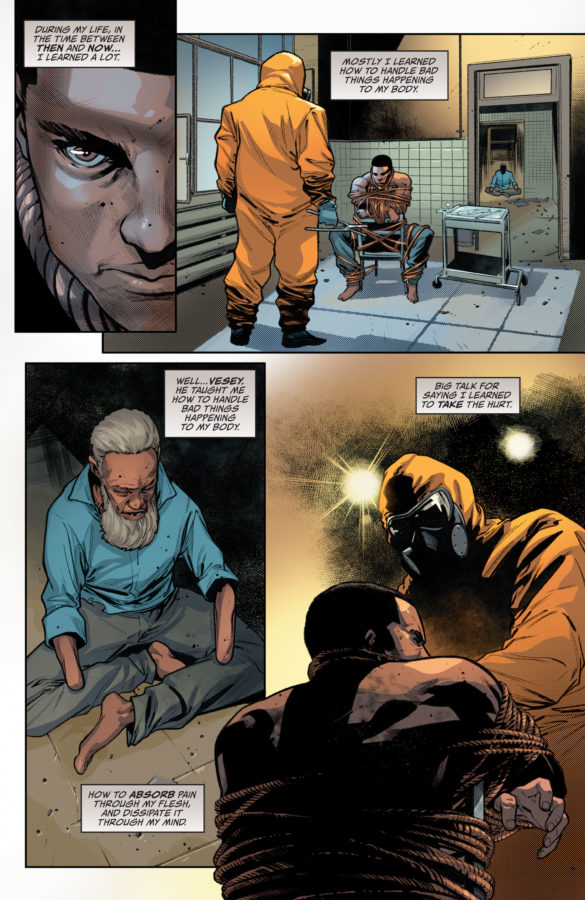 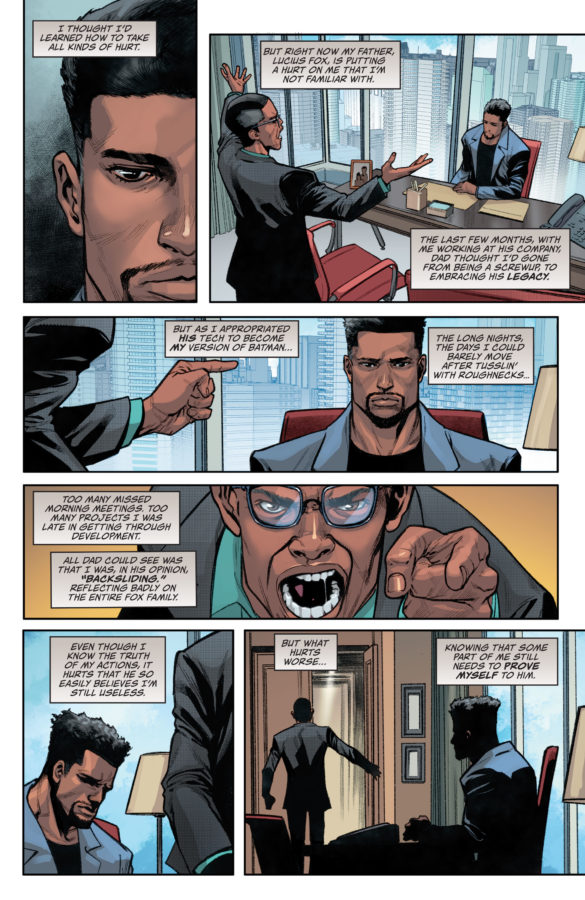 One of the most notable differences between Jace Fox and Bruce Wayne is that the new Batman’s parents are alive and well… and both are giving Jace troubles this issue. We see Lucius berating his son for his poor job performance and, as the Batman, the new hero has to save his mother from an attack on the Gotham City Juvenile Detention Facility. Unfortunately, Mrs. Fox is not the least bit grateful, due of her hatred of masked vigilantes.

However, there is some room for hope that his mother may come around. Even though Tanya threatens to shoot the Batman, Jace is able to talk her down.

Another time, another place… I think you’d try to pull the trigger, and I would be forced to stop you…  but enough violence for one day.

The fact that she then hands over the weapon indicates that she is open to reason on some level, and may eventually soften her views on Gotham’s vigilantes.

However, I have to wonder what might happen if she doesn’t come around. What will happen when they eventually find themselves in that “time and place”? Would Tanya actually try to kill the Batman? What if she succeeds in harming him, only to find out that he’s her son? Would Jace be capable of fighting his own mother to save himself? Eventually, the conflict between mother and son will have to come to some sort of resolution.

The same is likely true for his father as well. Lucius is a smart man, and he’s sure to notice that the new Batman is using technology that he created for Bruce, and that is supposedly being kept securely within his company. Sooner or later, Lucius will put two and two together and figure out that Jace is the new Batman. Will Fox Sr. be supportive of his son taking on the role of the Dark Knight? Or will he attempt to put a stop to it?

Is Future State the Definitive Future?

Simon Saint makes an appearance in I Am Batman #3, and it looks like he’s still running the Magistrate. This gives some hint that Saint and his organization will emerge from “Fear State” relatively unscathed. Although that isn’t absolutely certain, as the future of I Am Batman is so far only a potential future timeline. It is possible that the DCU might veer away from that future, but I think that DC has more “Future State” stories to tell before they do.

Whether or not the future of I Am Batman ultimately becomes the actual future of the DCU is somewhat irrelevant. It’s set in a future, and will likely continue to be set in it, in much the same way that Batman Beyond is. Some elements may work their way into the present day comics, but it’s extremely doubtful that it will ever fully become the present day status quo of the Batman books. That’s a good thing. This will give Ridley a lot more freedom to tell Jace’s story, without having to worry so much about how it impacts the rest of the DCU. With that freedom, he can take the story in directions the readers may not expect.

Likewise, Ridley’s story as a whole has taken the idea of Batman’s succession in an unexpected direction, as he’s managed to weave a fascinating story from that. I am keenly interested in seeing how the Batman might evolve with Jace Fox wearing the cowl.