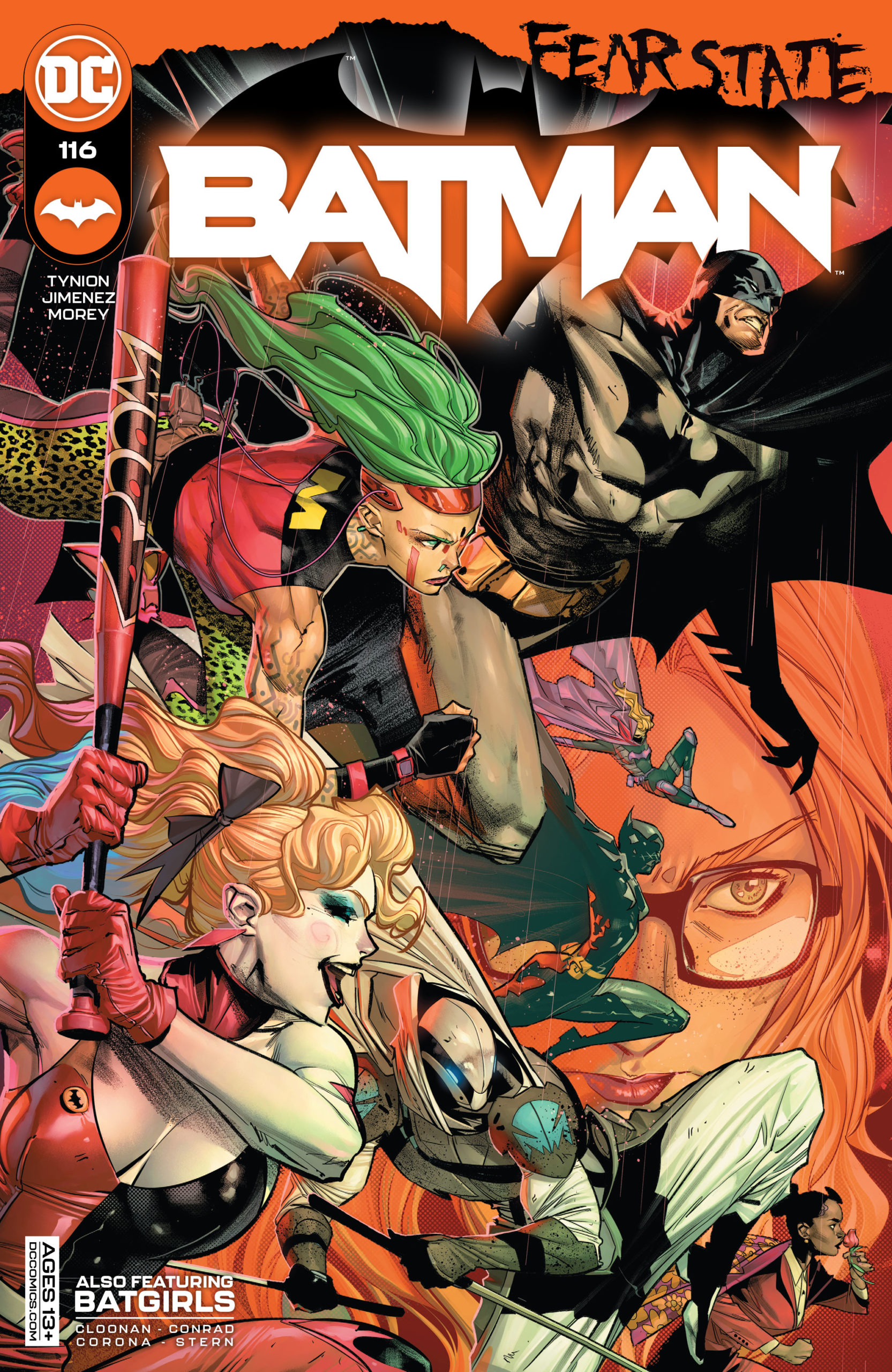 As the penultimate Batman issue in the Fear State era, Batman #116 does exactly what it needs to do, which is move the pieces across the board into the correct positions ready for the final blowout. In terms of building up anticipation for the end, it does the perfect job. Penultimate issues can often be a tricky road to navigate, but James Tynion IV gets it right with this issue.

The issue amps up the impending sense of doom for Gotham City, with time beginning to run out for Batman to beat the odds and overcome the evil machinations of Scarecrow, Simon Saint, and now, Peacekeeper-01. My favorite Batman stories tend to stack the deck against the Dark Knight, giving him seemingly insurmountable odds to overcome. By giving the Caped Crusader a proverbial mountain to climb, the eventual victory becomes that much sweeter. Based on that, if Batman comes out on top at the end of the proceedings here, then his win will give a sugar rush akin to downing a bowl of Skittles with sugar on top!

There’s a clear sense of danger waiting around every turn here; whether it’s a chilling encounter with Scarecrow in the sewers, Poison Ivy being pushed to the brink and potentially taking Gotham City underground, or Peacekeeper-01 discovering a new sense of twisted purpose. It wouldn’t be a modern-day Batman story without the Bat-Family coming into play though, and this provides a welcome opportunity for Ghost-Maker to once again showcase his formidable combat prowess. Every inch the physical equal of Batman, his long-lost BFF cuts a bloody swathe through the forces of Simon Saint with minimum effort and maximum efficiency.

It’s pages like this that provide the perfect showcase for the artistic genius of Jorge Jimenez. Throughout this run, he’s delivered a superb level of consistency befitting of the book, and in his depiction of the almost balletic Ghost-Maker in full flight, he’s taken it up another level. His work makes the character look like a hi-tech samurai, with no wasted movement, utterly economical in his deeds. When Jimenez’s time eventually comes to an end on Batman, it will take an uber-talented artist to be able to step into his shoes and not feel like a poor substitute, such is his relentlessly high standard of eye-popping art that flies off the page.

It isn’t all blunt force trauma though. Amidst the aforementioned Ghost-Maker action and a wonderfully uncomplicated brawl between Batman and Peacekeeper-01, we also get some wonderfully snappy dialogue from Tynion, which serves as a nice counterbalance to the fisticuffs. Scarecrow’s ruminations on the nature of fear and trauma are thought-provoking and suitably sinister for this time of year. If the brain has to process so much horror, amplified by Scarecrow’s special brew, then the end results could be permanently devastating.

We get another bonus story in Batman #116, as is now the norm. Continuing the Batgirls 3-parter with a slightly lighter tone, this tale is a nice counterbalance to the ultra weighty main narrative. The sparky back and forth between the female protagonists is bouncy, despite the extremely tight spot they find themselves in. What truly comes through is the bond that Stephanie and Cassandra share, as it’s a true sisterhood. As the situation gets worse for them, and their public perception is skewed beyond belief. Their faith in each other is utterly heartwarming.

Batman #116 works very well in conveying a sense of stakes and peril as we reach the final straight. Once the dust eventually settles, it’ll be interesting to see what the status quo will be, moving forward. In a crossover storyline that’s delivered the highest quality, this issue continues that standard. I personally cannot wait to see the payoff, which is coming very soon…