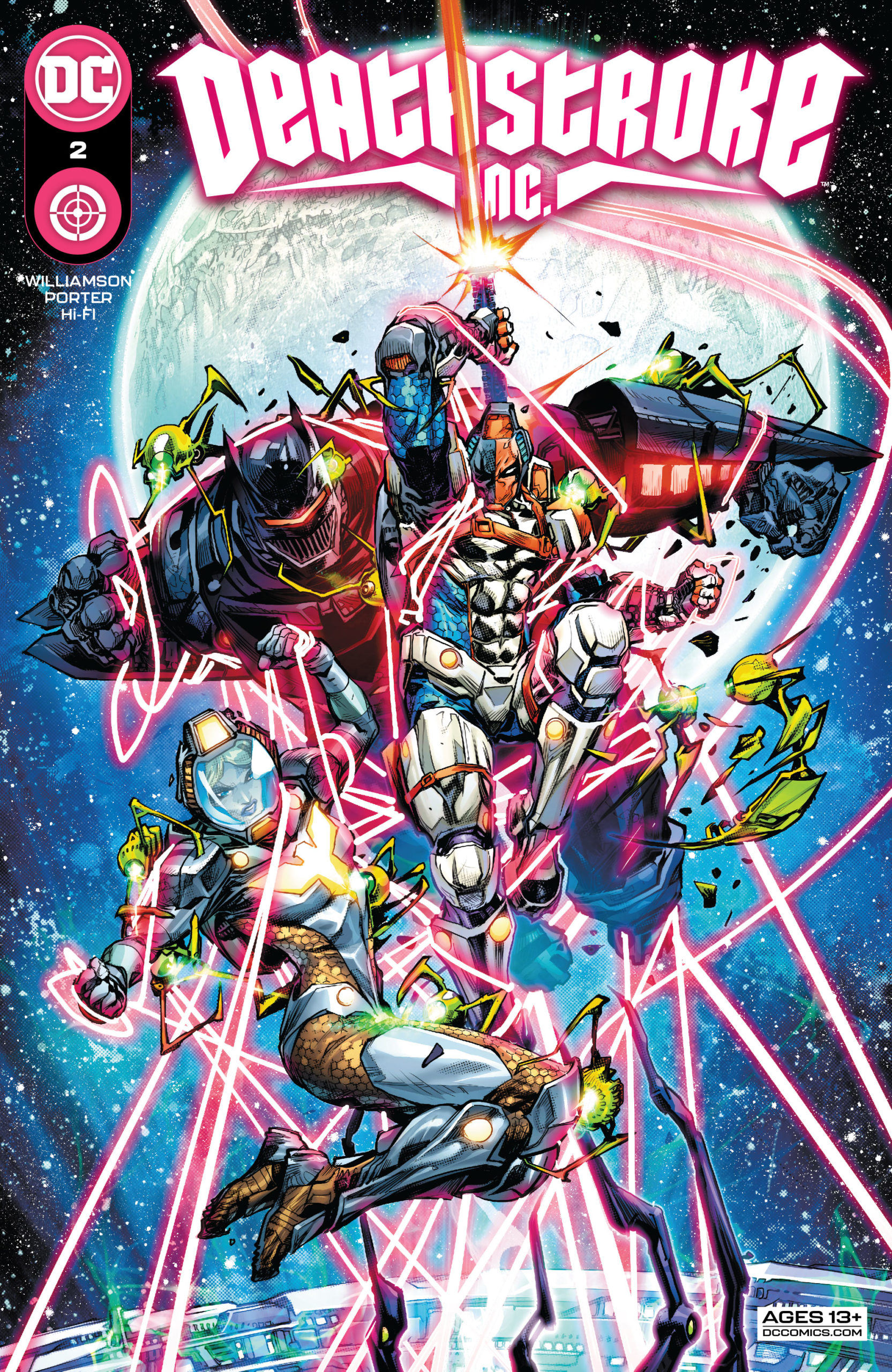 Deathstroke and his crew are back! As the title of Deathstroke Inc. #2 suggests, our heroes (?) have a mission in outer space that leaves us all with more questions than answers. This issue has quite a few references to its characters’ histories as well as the previous issue did, so read on at your own discretion!

A Vision in Stars

Before we even get into the story of this issue, I have to pay immense compliments to artist Howard Porter and color artist Hi-Fi. This issue is stunning. As a kid who grew up near NASA, space has always captured my attention and I love the beauty of the stars. Despite the fact that Deathstroke doesn’t enjoy his time outside the earth’s atmosphere, the issue presents space as beyond gorgeous. The background of every panel outside the space station and Bat-Rocket is depicted in shades of glorious blues and deep purples. These colors also offset beautifully against all the characters’ spacesuits and uniforms. The juxtaposition is marvellous and I could obviously talk about it for quite a while!

(I also want to pay a special tribute to Deathstroke’s featured weapon in this issue. It is a magnificent double-ended sabre that resembles Darth Maul’s lightsabre. The main difference between Slade’s weapon and Maul’s is that each blade is a different color and seems to radiate different energy. Honestly, I want to learn how to wield one of those sabres because they are just so [email protected]@$$!)

Like me, Hiro (Toyman 2.0) is also captivated by the majesty of space. Deathstroke’s uncomfortable and Black Canary’s very focused on the team’s mission, so it’s nice to see a young guy like Hiro enjoying his time in orbit, even if he wasn’t supposed to be there in the first place. In fact, this issue makes good use of Hiro’s act as a stowaway, leaving him as the main emotional component of the book.

I Need a Hiro

Who is Hiro Okamura? Although we were introduced to the significantly younger mischief maker, Toyman 2.0 didn’t reveal much. It seemed from Deathstroke Inc.’s first issue that Hiro was going to be a background character, as it seemed to center more on Slade Wilson himself and the new connection he’d made with Black Canary. This issue did show the growing trust and relationship between those two, but it also revealed an emotional component in hacker Hiro.

While confronting the “villains” of this issue, Hiro discovers that one of the baddies was being forced against his will to commit evil. Not only that, the android or robot was being tortured by the true antagonist of the issue. This causes Hiro to risk his own life to save the secondary villain. Deathstroke, despite protesting Hiro’s physical presence on the outer space mission and insisting he won’t save the younger hero, then goes back to help the youngster with his mission of freeing the captive villain.

Despite having ‘death’ in his alias, it has become certain and clear that Slade Wilson has softened. He’s still rough around the edges and sarcastic as hell, but he’s not a bad guy anymore. Hiro’s also surprising. He’s originally presented as a goofy nerd who doesn’t take much seriously, but the nerdling is clearly deep and has a compassionate heart. The poignancy of the emotional moments between Hiro and Deathstroke really make this issue. I fervently applaud writer Joshua Williamson on pulling together such a vulnerable moment in the heat of battle. Hopefully more moments like this will appear in future chapters!

Trust is a Two Way Street

I am intrigued by the mystery of organization T.R.U.S.T. as the group claims to be heroic and does indeed save people. However, our heroes discover at the end of this issue that the space station and astronauts they were rescuing were part of T.R.U.S.T. This isn’t that strange, except that none of the team was told they were rescuing their own. Why was their mission kept a secret? Why does this ring of Amanda Waller’s behavior in The Suicide Squad?

I still believe that T.R.U.S.T. is a shady organization and that the well-meaning heroes have got themselves into something they didn’t realize was slimy. Both Black Canary and Deathstroke mentioned in the first issue that they signed on with T.R.U.S.T. to do good for the world. Hiro said he joined for money, but that’s less believable after this issue. The fallout for these characters finding out that the organization might not be so beneficial is sure to be exciting, if heartbreaking. I look forward to seeing what other clues about T.R.U.S.T. the team discovers!

Deathstroke Inc. #2 is strong. Unbelievably strong. Some of the action scenes and speech bubbles are a little hard to track because of their fluidity, but that’s the only real problem I can find with this issue. This comic is being set up to really drive to something, and it’s exciting to see the building blocks come together. For being the second issue of Deathstroke Inc., I’m pleasantly surprised that the issue didn’t fall flat or waver. The tone and pacing is consistent and steady and makes for an excellent read.

I’m captivated by the mysteries presented in this issue. I think it’s pretty easy to stay on the edge of your seat until the next issue comes out! What do you look forward to seeing in future issues? Did you think anything was missing from this one? Drop a comment below!