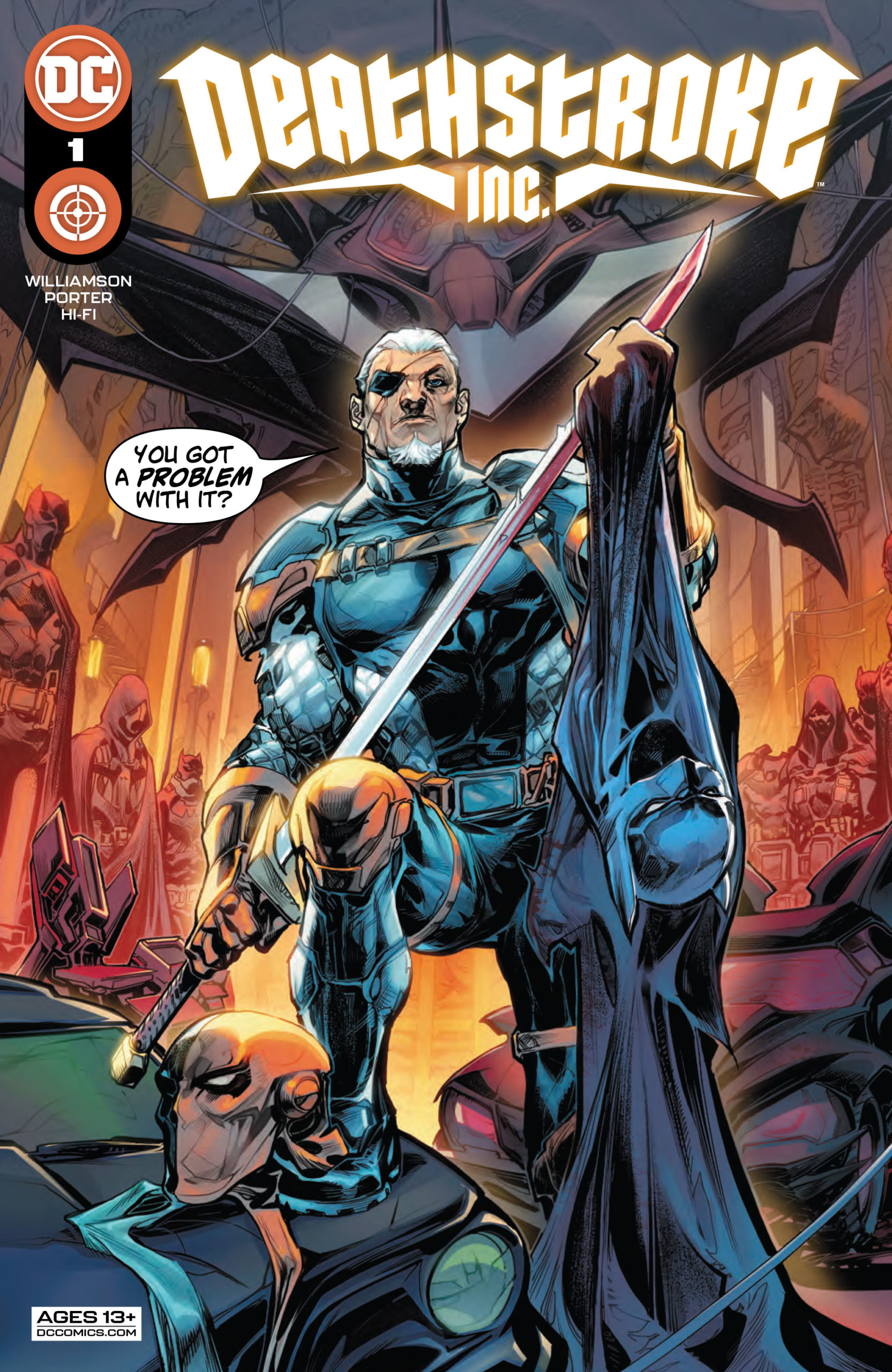 Deathstroke Inc. #1 begins a brand-new series following the “supervillain” through a later period of his life. I genuinely didn’t know much about Deathstroke before reading this, but he’s a captivating, violent character with a lot to unpack. His allies also appear to be multi-layered and perhaps untrustworthy? We’ll break it down further from here. Beware of spoilers and watch out for stingers!

This initial issue is a clear setup for the rest of the series, and it does an excellent job. The highly familiar characters of Deathstroke and Black Canary get (and need) little to no introduction. Meanwhile, Hiro Okamura (The Toyman) is also part of the team, although the issue clarifies that this is Toyman 2.0, not the villain from classic Superman titles, but instead the scientific genius introduced in the 90s.

The one newcomer to this series is the leader of the team, Juliette Ballantine. With bright purple hair and crossed arms, she definitely comes off as the authority figure. This is further confirmed as the comic explains that Ballantine is the head of organization T.R.U.S.T. (Transparent Researchers United for Strategy and Technology), the group that has united the comic’s team, for better or for worse.

Each member of the team was brought on by Ballantine for different reasons; Hiro and Deathstroke are in it for the money, but Black Canary’s a bit nobler and wants to save the world. Ballantine’s own motives aren’t explored in this issue, but it also isn’t really about her.

The issue reveals through subtle clues that the characters are in a world where Batman is either dead or retired. Deathstroke first breaks onto the scene in [email protected]$$ style via Batmobile. Batman isn’t in the picture, although the issue doesn’t dig into why. Food for thought there, and stories for later issues.

Plenty of other allusions to common DC heroes are mentioned, however, such as when Deathstroke mentions his partner Black Canary’s boyfriend, Green Arrow. Dinah and Slade also mention the Justice League, both positively and negatively.

Oddly enough, the main villain of this issue is… bees?! The town where our story takes place has been taken over by the H.I.V.E. organization. Deathstroke and Black Canary’s mission is to bring in their Queen to T.R.U.S.T. alive.

Let me preface this by saying, I’m usually not one of those girls freaked out by bugs. Friends in high school would scream when they saw cockroaches while I was usually more disgusted by their reactions than the bugs themselves. It’s to the point that I don’t even get most insect phobias, and even get confused by other peoples’. No more. 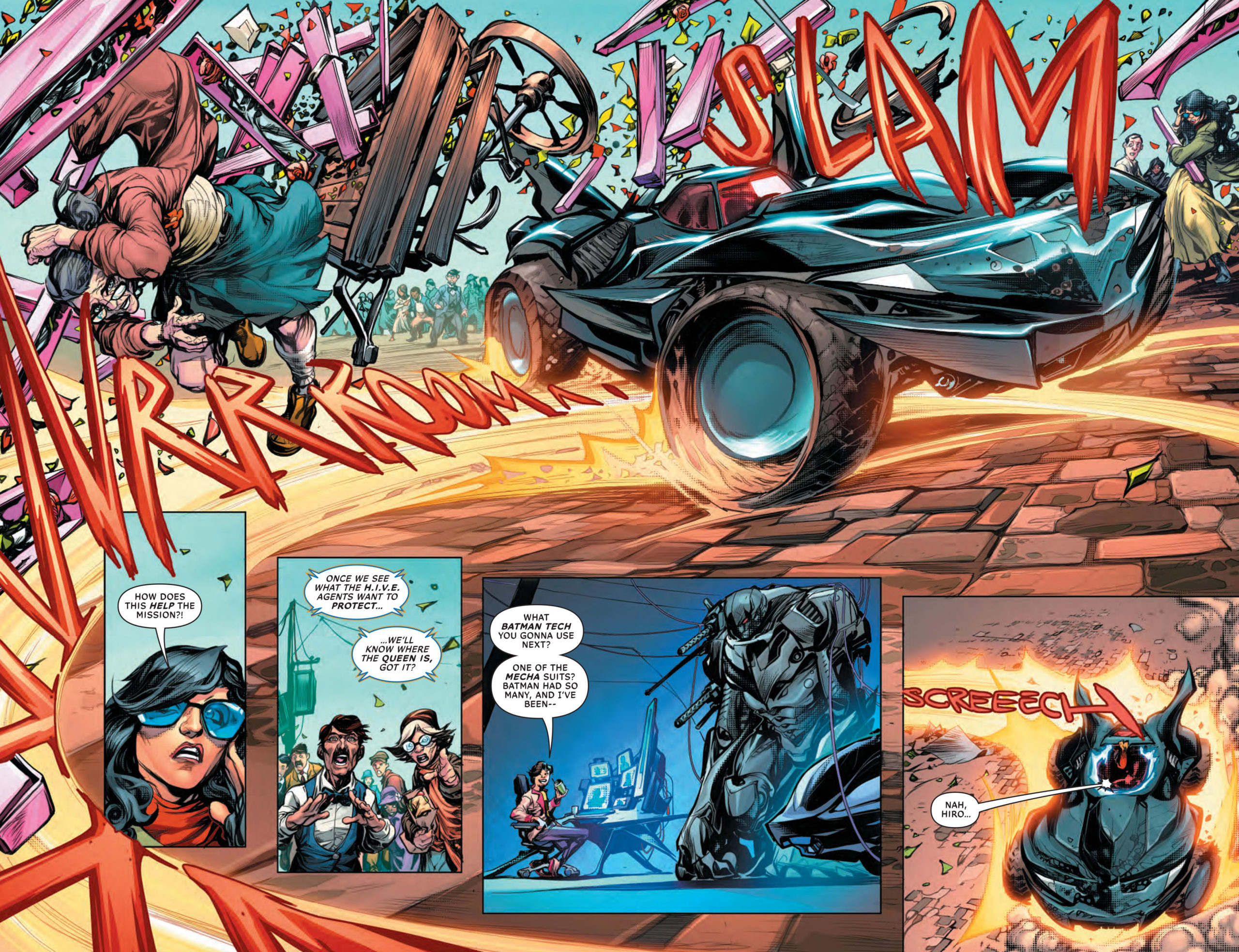 This first issue of Deathstroke Inc. will have me terrified of bees and wasps forever. The first villain that Deathstroke and team face off against is the Queen of the H.I.V.E. herself, along with her “spouse” and “babies”. The art of these characters (drawn spectacularly by Howard Porter) is magnificently horrific. I both wanted to stop and continue reading. The images brought to mind a challenge from the Netflix show “Glow Up” where a makeup artist recreated a beehive, complete with fake bees, on someone’s face for a phobia challenge. I laughed about it then, but I’m not laughing now!

Honestly, the H.I.V.E. Queen’s husband was the worst for me to stomach. If you haven’t read the issue yet, just prepare yourself for some nightmares about what might be living in your attic. That’s all I have to say about that!

I think the most interesting part of the story in this issue is a conversation between Deathstroke and Black Canary, as they go about their mission. The characters discuss why they joined T.R.U.S.T. (beyond just monetary reasons or a sense of right), and Deathstroke’s reason is honestly heartbreaking. I won’t spoil it here, but it makes sense that seeing an older version of Slade Wilson in this series sees him looking at life a little bit differently.

To my frustration, Black Canary gets interrupted before she can explain her own reasons, and while I’m sure this was meant to be climactic, I’m nevertheless annoyed that my curiosity was so easily piqued, and dashed! What can be said however is that Dinah may have lied about her reasons for joining if her brief conversation with Deathstroke at the end of the mission is any indication.

The organization appears to be not all that it seems after our heroes return to base. With a name like T.R.U.S.T., is it really that surprising, though? I thought it felt a little too on the nose when we were first introduced to them, but perhaps I’m too naturally suspicious. We’ll just have to wait for later issues to figure out if T.R.U.S.T. and its mysterious leader can be… trusted.

Deathstroke Inc. #1 is captivating. While the visuals felt a bit off-balance for me in some scenes, the artwork and colors are lovely and imply a constant motion with the characters. I particularly enjoyed the pages that introduced the main heroes, as they demonstrated their powers and their names appeared in block letters in the frames.

The story so far is clearly going to be a serial work with each part playing off of each other for continuity. While already appearing a bit complex, as a few characters are not what they seem, there’s nothing really being introduced to the overall arc that hasn’t been seen before. That being said, the writing’s entertaining, and the characters feel real. They also feel reflective on who they’ve been in other stories and media. This is a relief, for me especially, as it can be difficult for new readers to get on board with what they feel are false characterizations.

Overall, this opening issue of Deathstroke Inc. is a homerun. A compelling story and multi-issue arc are sure to unfold. I’m excited to learn more about this part of the DC Comics sphere and to read on.

Are there any allusions we missed? What are you most looking forward to in this series? Drop a comment below.