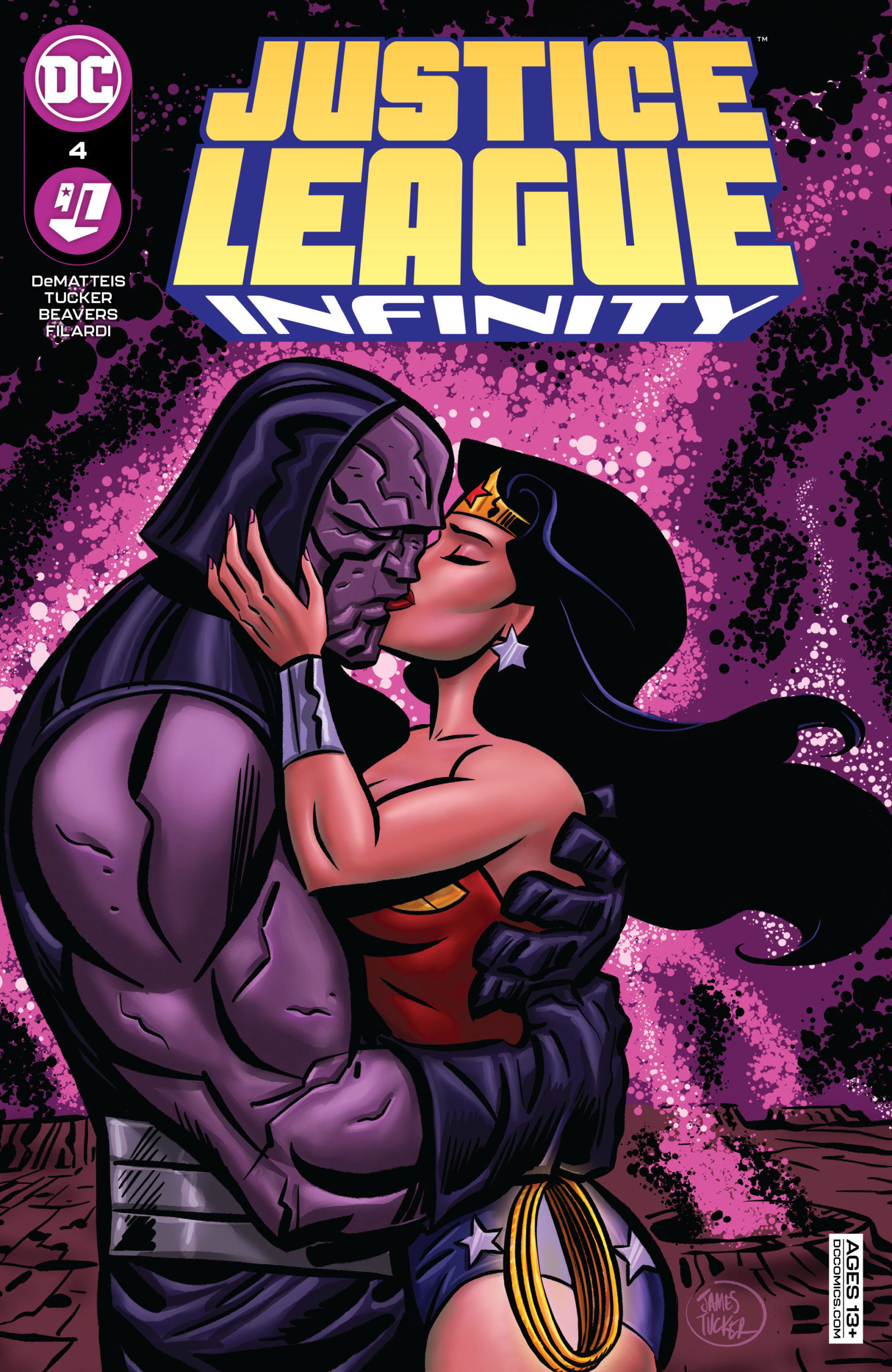 The Multiverse is a strange place. In a cosmos full of infinite possibilities no story is off-limits, as made evident in this month’s Justice League Infinity, which chronicles a love affair between Wonder Woman and… Darkseid!

Previously in Justice League Infinity, the android Amazo ventured into a dimension known as the mirror realm, and his presence there breaks the Multiverse. Cracks begin to open across various different Earths, and League members are suddenly teleported to another dimension.  This time Wonder Woman is transported to a desolate Earth where she meets a version of Darkseid who tells her the history of his dimension. This Darkseid also waged war with his version of the Justice League, however, he established a truce with them, which eventually led to a romantic relationship with his Earth’s Wonder Woman.

A Not So Darkseid?

So – I’m not going to lie y’all. I have very strange feelings about this issue. While it’s not uncommon for comic book villains to reform (think Venom, Red Hood, Magneto, etc), Justice League Infinity‘s new Darkseid blindsided me. Part of my problem with the issue is the very nature of Darkseid’s character. In many ways he embodies evil.. he’s literally the New god of darkness; that’s his shtick! The idea that Darkseid – one of DC’s arch-villains – could reform seems crazy. Nevertheless, J.M. DeMatteis and James Tucker attempt the impossible in this issue and write a Darkseid that’s quasi-sympathetic.

Please don’t misunderstand me: I’m not saying that this issue doesn’t work, because it does. I was just forced to quickly suspend my disbelief at the alter of Multiversal shenanigans. Once I was able to let go of my preconceived notions about Darkseid, the story came together quite nicely. Here the ruler of Apokolips is a tragic figure. While once mighty, his poor decisions have left him hopeless and alone. This tragic ending helps hold the story together, as the thought of Darkseid finding love is frankly outlandish. A Darkseid who does so, but then unintentionally destroys everything due to his unchecked ambition? That’s a lot more palatable.

Once again Ethan Beavers was given a Herculean task for this title: how do you depict Nihilism as a character? In this particular portrayal of the Fourth World Saga, the Anti-Life Equation is sentient, it’s an actual character that has agency; therefore, Beavers had to figure out how to draw what essentially is meaninglessness. Trying to wrap such an abstract concept in pencils and inks must have been a daunting task. Luckily, he was up to the challenge. He nails it. Mind you – I’m sure that he was given some guidance by DeMatteis and Tucker. Nevertheless, Beavers executes these ideas brilliantly, and unsurprisingly, the issue is beautiful.

Justice League Infinity #4 takes a bit of a strange turn, in what has been an outstanding series. The premise behind DeMatteis and Tucker’s script is frankly bananas, but they land the execution about as well as one could with such a crazy idea. Ethan Beavers continues to deliver gorgeous, imaginative art that’s both unique, while also homaging Bruce Timm’s DCAU aesthetic. Overall, despite its quirkiness, the issue is fun.

Final Verdict: This chapter isn’t quite a misstep, but it’s also not a homerun.