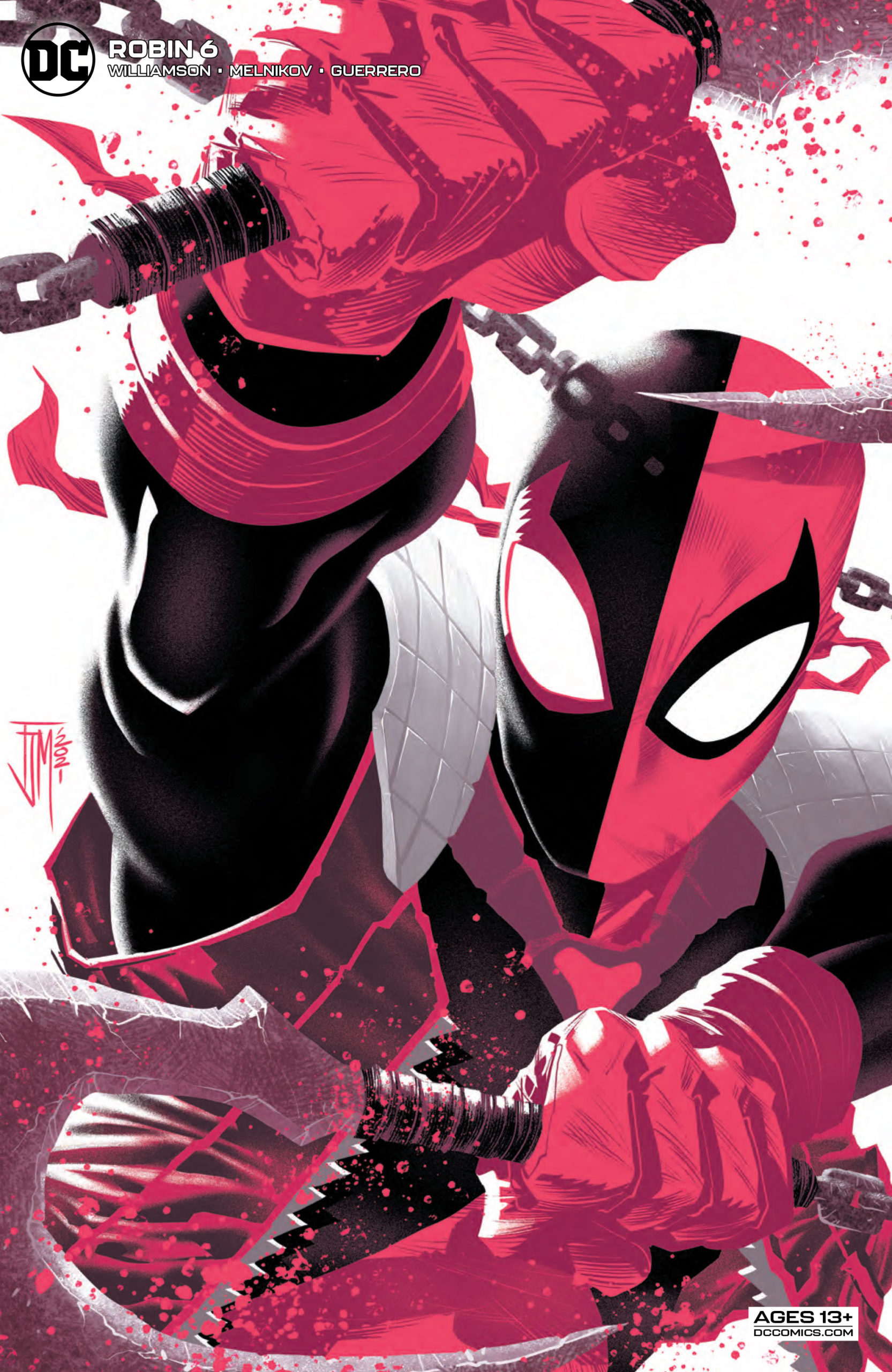 Well, after last month’s emotional family reunion, it was well past time that Damian got back to Lazurus Island and killed something. Damien Wayne was not going to just sit around and wait for the answers to fall into his lap! Bring on Robin #6.

We’ve already had an emotional punch to the face and now we get a physical one. Joshua Williamson’s clearly done with the build-up, as he’s come right out and said “Time for Action!”. It’s not like we haven’t seen fight scenes already, and we’ve even seen Damien assess the other players, but this issue was just something else. It felt very “battle royale”, and reminded me so much of old video games. The match would load on screen and the voiceover would yell “FIGHT!” to start the battle. It definitely felt like Joshua was pulling from that genre.

Even though there wasn’t as much dialogue in this issue, Williamson still managed to pull out some awesome lines. I myself am a pretty sarcastic person, but the level of sass Damian has is just astounding. There’s so much violence in such a small package.

I adore that we also get to see some other fights from background characters, as it adds so much depth to the competition. We get some well-earned backstory from a prominent side character, though I’m not entirely sure about where Damien and Flatline’s dynamic is headed. Williamson seems to be hinting at a little bit of a romance… I’m not sure how that will work out with this traumatized 14-year-old. I love Rose Wilson, at this point, she can do no wrong in my eyes.

I adore this series the more there is of it. This can, in part, be attributed to Gleb Melnikov and Luis Guerrero doing such an extraordinary job with the artwork. The fights are delightfully crafted, and although they’re brutal and bloody, there’s something so clean and precise about them. Such crisp artwork really lends itself to this kind of story. Melnikov seems to have a talent for creating a real sense of motion. Following his pages, you can clearly see the direction of the punch or kick. You can telegraph what’s going to happen in the next panel just by looking at how Gleb has positioned the characters. Guerrero has also produced some excellent work in Robin #6. The vibrant colors always provide a real juxtaposition to the bloody story going on, which is definitely something to watch out for in this issue.

The more I read, the more I’m convinced that this series is giving us one of the very best Damian Wayne stories ever… and there’s still so much left to find out! The best part is that we’re never left unsatisfied, as Williamson’s slowly letting things slip. The series somehow feels super fast and action-packed while also having a slow burn plot-line. You always want to keep coming back to read more, because the team is just that good! I will never miss an issue of this run!