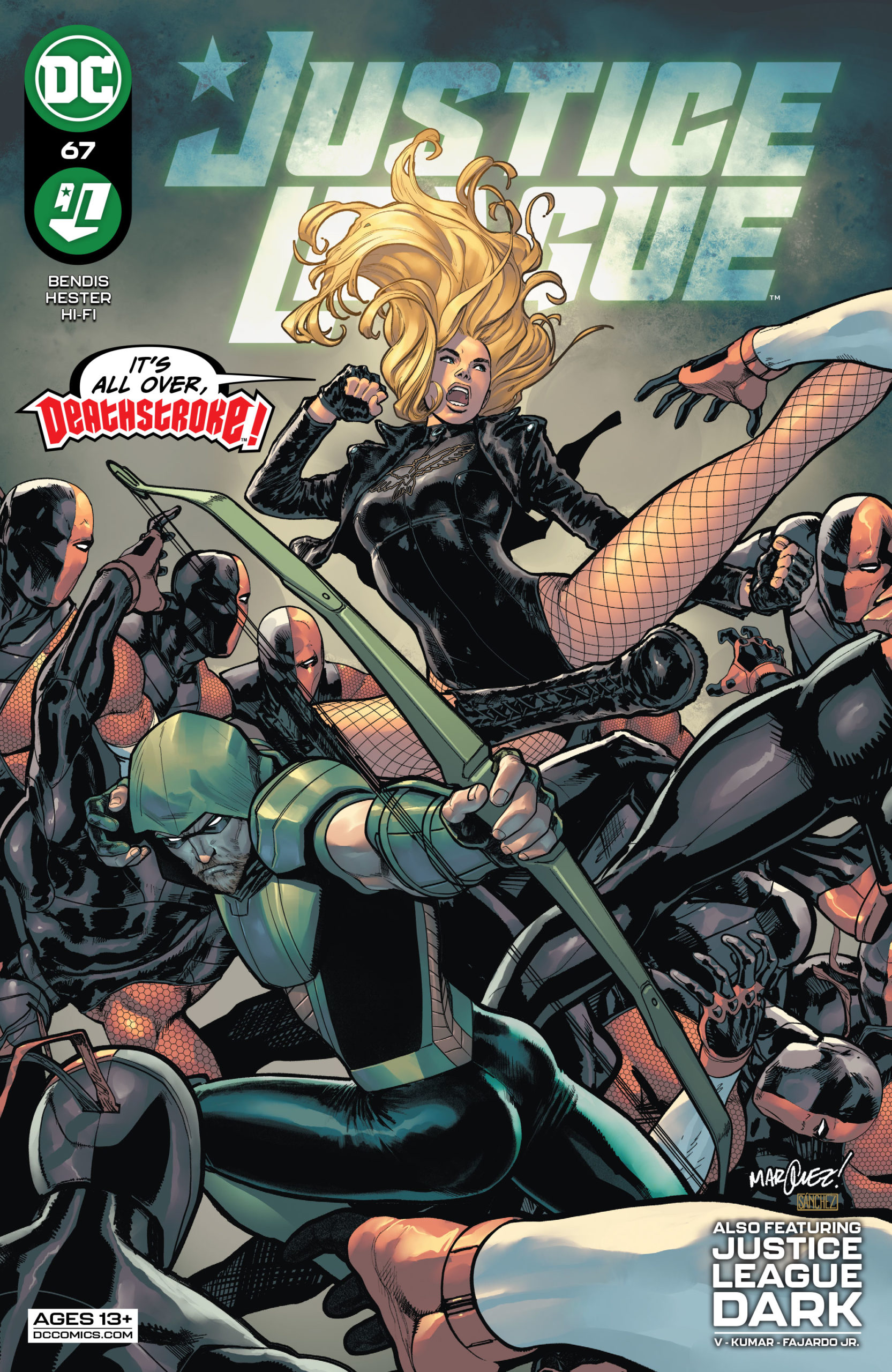 The battle rages on against Synmar Utopica, but he’s not the only threat facing DC’s greatest heroes, in this week’s Justice League #67.

The Hall of Justice has fallen. There’s a power-hungry alien rampaging through Washington, D.C., and an army of Deathstrokes is hunting Lois Lane’s long-lost, secret agent brother. It’s a strange time in the lives of the League. Even their entire might, combined with that of the United Planets isn’t enough to stop Symar Utopica, as he continues his assault on Earth and its heroes. Unsurprisingly, Batman has a solution, but Superman isn’t quite on board.

Meanwhile, Leonardo Lane (Lois Lane’s brother???) has decided to hide out in a graffiti-ridden truck stop toilet stall in Coast City while attempting to recover from his encounter with Deathstroke Inc.

I’m beginning to wonder if Bendis knows exactly where’s he’s going with all of this. “United Order” started four issues ago, and ma, it really feels like the writer’s dragging his feet. I don’t know why he’s taking his time like this, but he could have easily told this story in 2-3 issues. Then there’s the fact that this chapter was delayed. I don’t know if it needed rewrites or if there was a shift in creative direction, but after looking at the solicitations, it seems like this arc should’ve finished this week. Alas – the last two pages of Bendis’s story imply that we have at least one more issue in this painfully dragged out story. 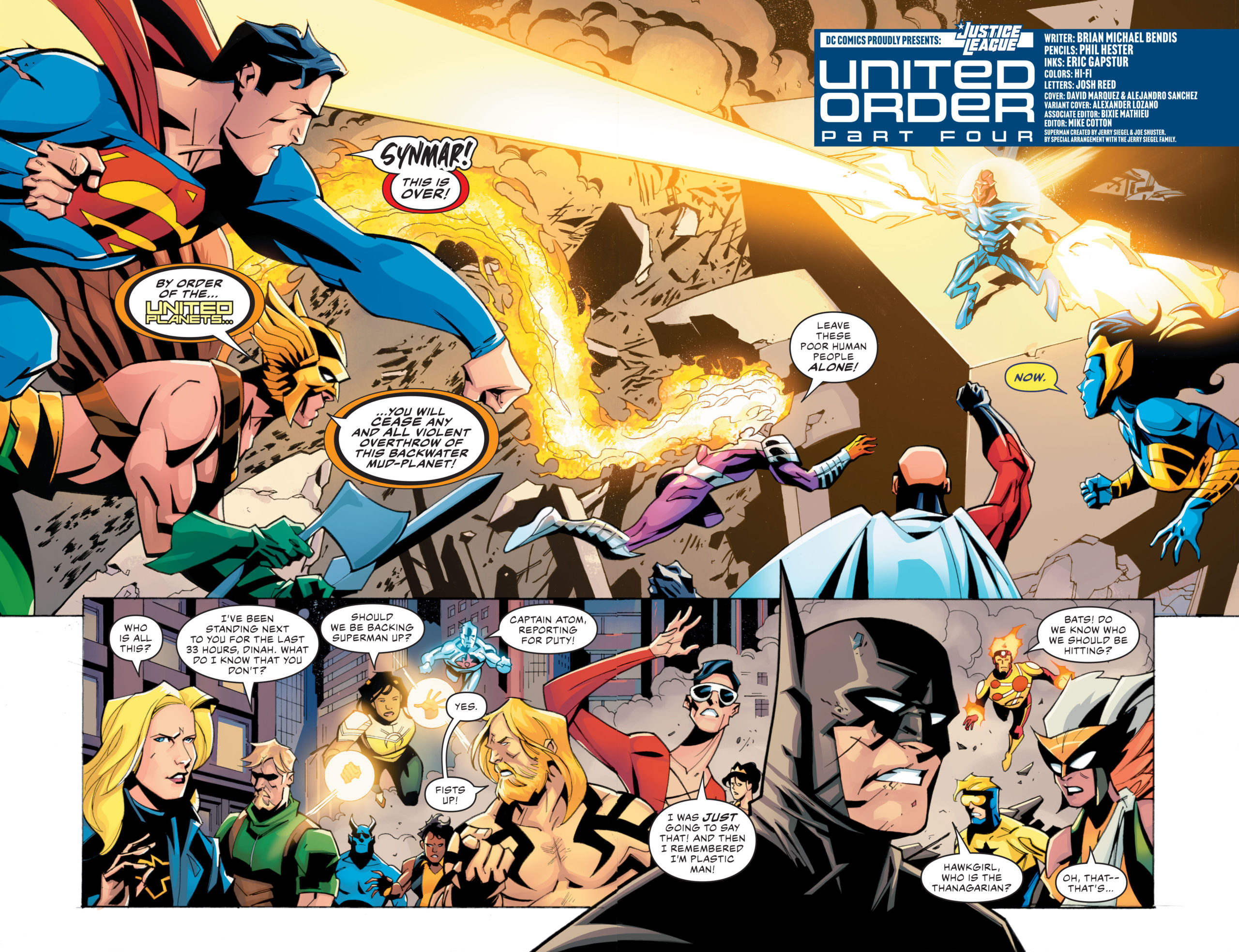 With regards to the issue itself, it’s alright, but it really didn’t set my world on fire. Bendis needs to get to the point and move on to the inevitable Checkmate crossover.

Phil Hester once again claims penciling credits for this week’s Justice League, and I’m hoping he stays on for a while. His work is wonderfully cartoony with a sharp, angular sensibility. His aesthetic channels Mike Mignola and Jack Kirby simultaneously. He has a solid amount of DC work under his belt, and I am honestly shocked that DC hasn’t tapped him for a title like Justice League sooner, and they would be wise to keep him around.

I’m not going to lie – reading this week’s Justice League Dark was somewhat frustrating. It felt like I’d missed something. It’s bad enough that DC has relegated JLD to the backup pages of Justice League, but the strip suffered yet another blow due to the delayed shipping. I lost the thread, and I’ve been reading comics for over a decade. I can only imagine how frustrating this must be for those who are relatively new to comics. Ram V’s storytelling is so compressed, due to his truncated page limit, that the last few issues have felt like a blur. Now that he’s shifting gears, it’s all just more cause for confusion.

Justice League #67 has its problems. Bendis needs to get on with it while Ram needs to slow down. Pacing aside, the stories are interesting, which is worth something, and the art is very pretty indeed… so that’s something.

Final Verdict: Justice League needs a shake-up, a creative shot in the arm, or something. It’s just feeling a bit stale.