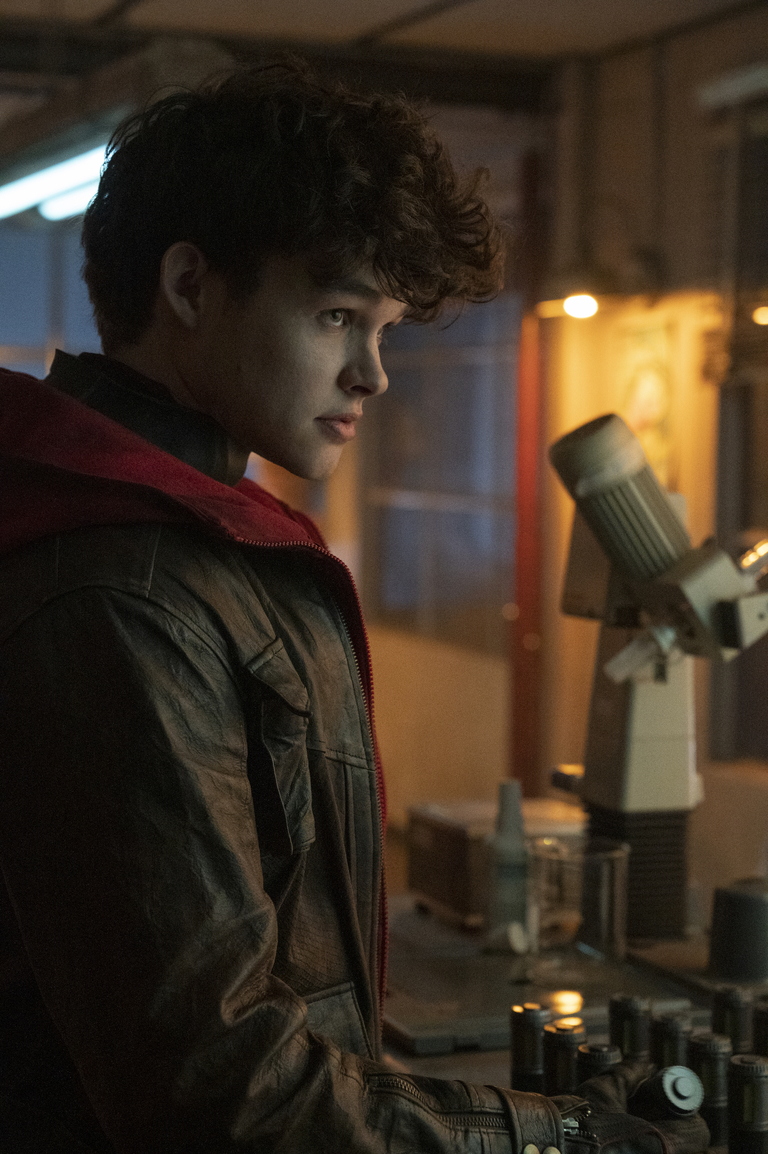 Last week’s Lady Vic gave us a glimpse into Barbara and Dick’s past while pushing the story forward with Jason giving some of Gotham’s less savory citizens the anti-fear gas. Doing so resulted in several casualties and left us wondering if Scarecrow would retaliate against his protégé or not.

That’s what my drug offers. Freedom. Now, what’s more addictive than that?

When Red Hood returns to Scarecrow’s factory, he’s surprised that his mentor isn’t angry with him. Crane explains that he isn’t Batman and that anger is just “fear in a little black dress”. After feeling safe from Crane’s wrath, Jason explains that he stopped by to gear up for a confrontation with Gotham’s crime families. They are none too happy about Red Hood’s violence and broken promises. Jason takes a hit from an anti-fear inhaler and it doesn’t feel right; Crane poisoned the drug in retaliation. 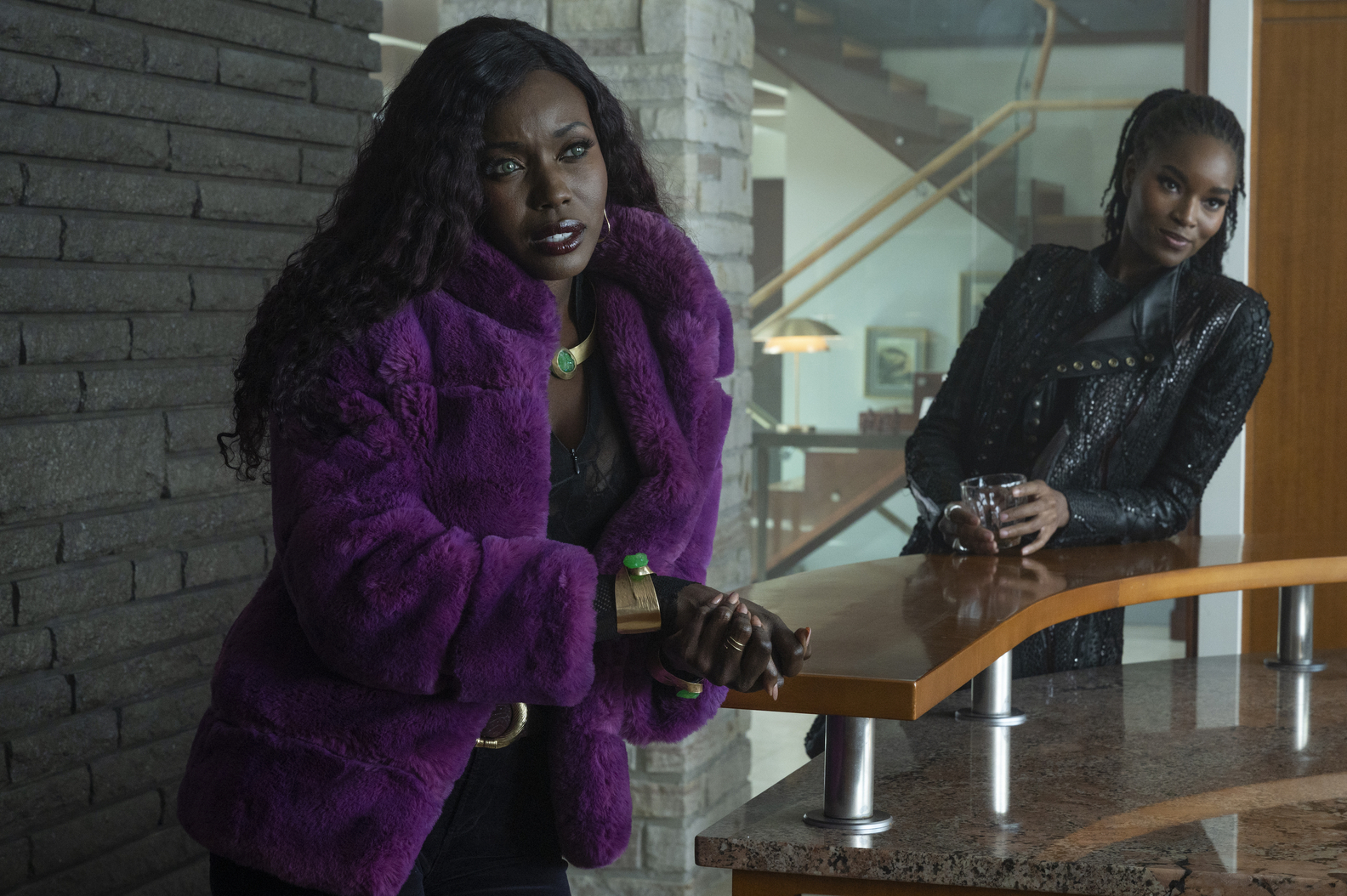 The leaders of Gotham’s crime families have met up expected to see Red Hood. When Scarecrow shows up instead, the crime bosses quickly figure out that he’s behind Hood. Scarecrow admits to this and reveals his grand plan is about to enter its final stage—he’ll control Gotham City by taking away its fear. He’ll need the crime families to distribute the drug, which will make them extremely wealthy.

Sometime later in 51%, Jason wakes up in Scarecrow’s factory. He’s tied up and still feeling the effects of the poisoned anti-fear drug. Despite using the anti-fear drug, Crane tells Jason that he is still afraid of Dick Grayson; which explains his earlier actions. Despite promising Jason he’ll get to see the fall of the Titans, it’s clear that the former Robin is being punished by his new teacher.

Meanwhile, the Titans go on the offensive to figure out where Scarecrow and Red Hood are to stop them from releasing their drug. Dick and Barbara agree to work together to deal with the chaos that’s happening from just the small dose that Jason released the night before. Realizing how deadly the drug is, Dick feels that the best way to stop Scarecrow is Oracle—it was the only way that Batman was even able to stop the master of fear. Despite the NSA’s ban on the tech and Barbara’s gut feeling, she agrees to use Oracle. 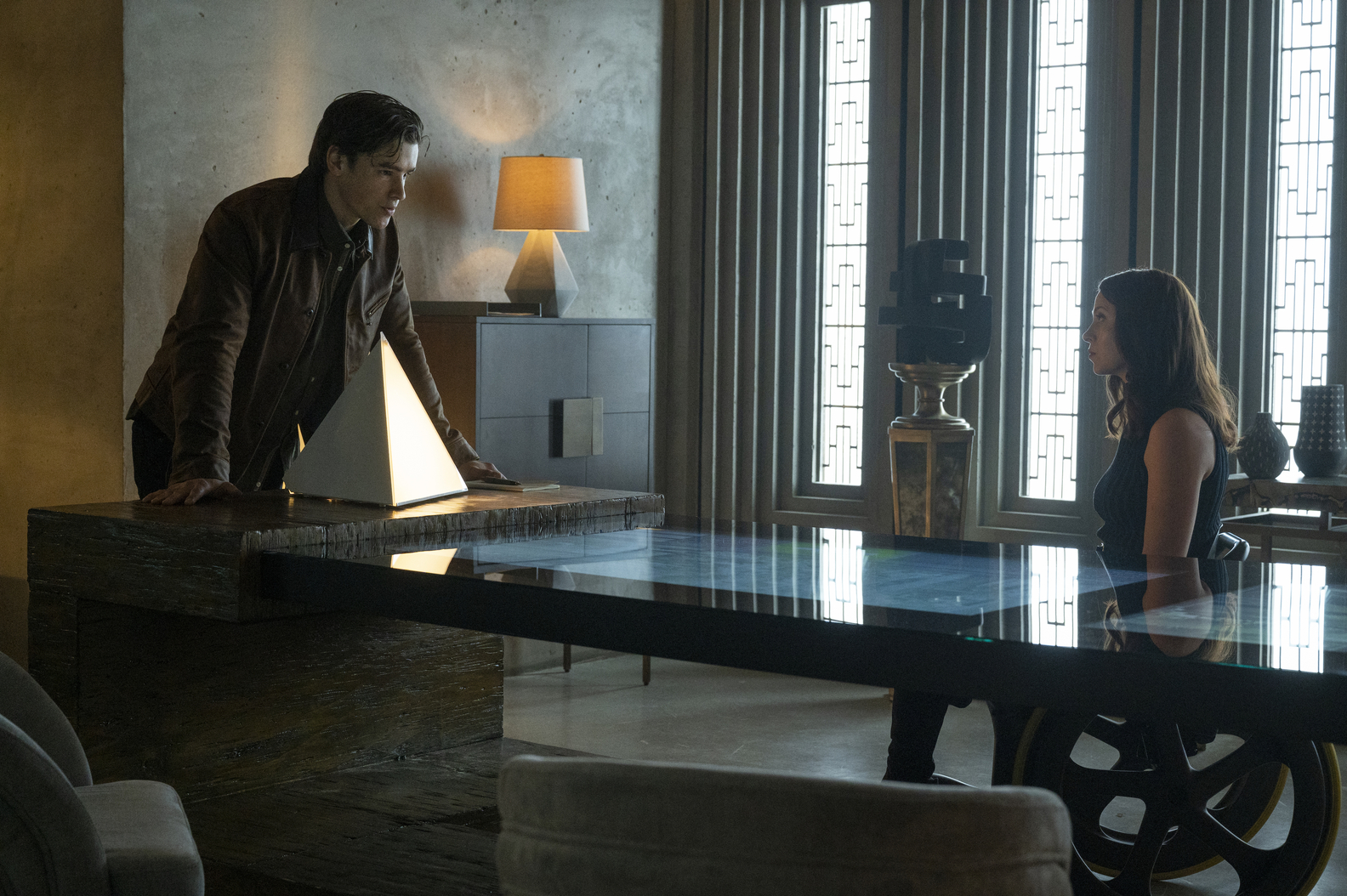 It is haunting that after being powered down for so long that Oracle updated its systems to include recent events upon the system is turned back on. Dick uses Oracle to scan private communications for Scarecrow, which doesn’t take long at all. Crane gives one of his associates an address to which Dick heads to; calling Superboy to meet him there. Trouble awaits them there, just not the kind they were expecting.

There is a booby-trapped van with a man connected to a modified version of the EKG bomb—which is getting a lot of mileage this season; 51% marks the third time the device has appeared—used to kill Hawk a few episodes back. Superboy doesn’t have enough time to stop it and tosses Dick out of the blast zone. It’s at that moment that Dick realizes that Oracle has been compromised by Crane. When he calls Barbara, she wants to destroy Oracle while her former fling thinks they can still use it to their advantage.

After a quick spat between lovers, Dick and Barbara go analog to take Scarecrow down. Between what they figure out about the man that was outfitted with the EKG bomb and the information the Fire sisters bring back, the team is able to find Crane. 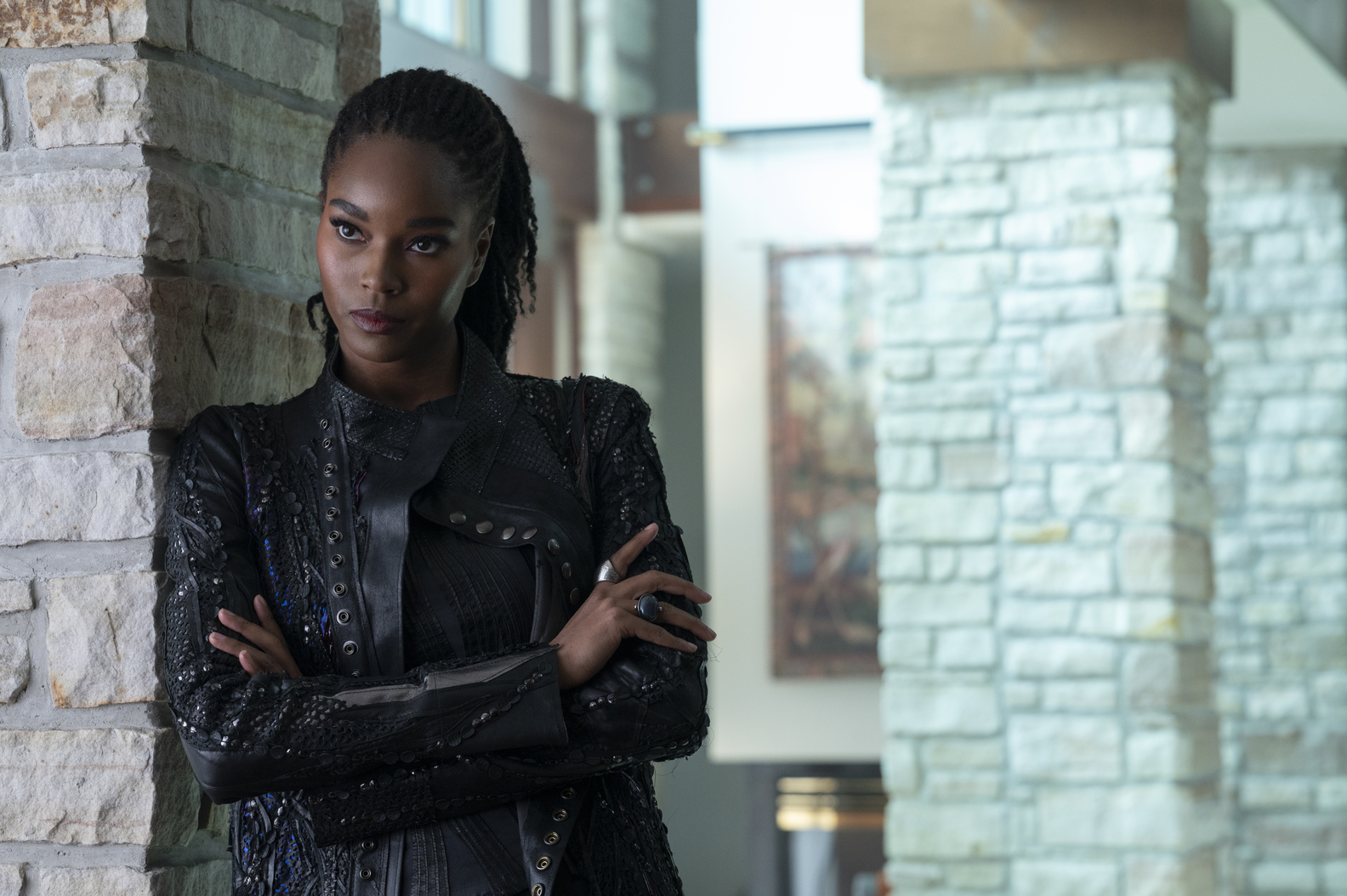 It’s not just Dick and Barbara working together to figure out where Crane is, Starfire and Blackfire work together to get more information on Scarecrow’s plan. They head to crime boss Valeska Knox’s home to get the information as she’s not too happy about any of what Scarecrow and Red Hood have been up to. That said, Knox is just going to up and help Starfire without a favor in return—she wants to see her son.

There is a brief scene where Starfire and Blackfire convince Knox’s son, Michael, to see his mother. It turns out he was right to be resistant, as within moments of him returning to his mother, she shoots him in the head. It was a shock to both the audience and Starfire and sends the alien Titan into a rage. In perhaps the only moment of Season 3, if not all of Titans, that I find a bit cringeworthy, a hero gives in to that rage and kills the mob boss.

Did Valeska Knox deserve to die? Perhaps… she wasn’t a good person. But I bump into my heroes making that call. Despite how I feel about that, it leads to the highlight of the episode—Blackfire’s explanation of that rage they have both felt now. She tells her sister of the motivation to kill their parents, which is where the title of this week’s episode, 51%, comes into play. Kori realizes that her sister never had it easy and that by not returning to Tamaran, Blackfire’s life had become increasingly difficult. Props to Anna Diop and Damaris Lewis for an incredibly powerful scene between these two sisters.

With all the information to find where out where Crane and Jason are hiding, the Titans suit up, including Blackfire, to take them out. As a viewer, you share in the joy that Crane is legit surprised that the Titans found him and his operation. In what doesn’t amount to a super amount of action, the Titans shut down the production of the anti-fear gas. The mob boss leaders flee early on with Crane and Jason not far behind. His plan may be ruined, but Scarecrow promises to get his revenge. 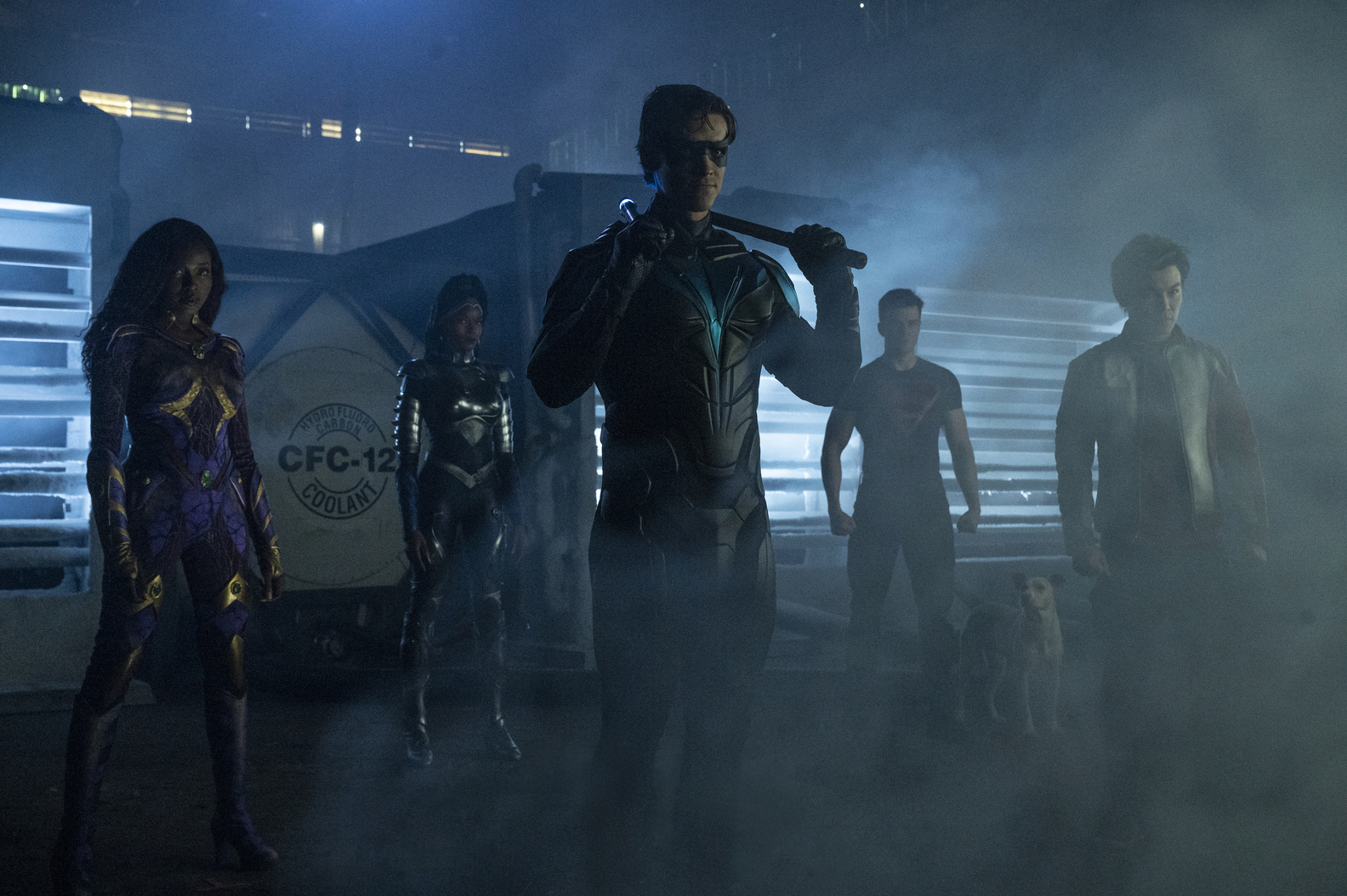 51% ends with the team celebrating at Wayne Manor, along with Barbara. She “leaves”, only to find herself in Dick’s old bedroom where it appears a flame between the two former lovers is still lit. Gar, who didn’t have much to do this episode (other than finding a letter from Jason’s friend Molly), ends up leaving the party entirely to go visit Molly. Gar is the one Titan who wants to continue to believe that there’s something of Jason left to still save and it appears he’ll be working with Molly to redeem the Red Hood.

51% was wholly satisfying. Everyone was on their A-game, delivering some of their best performances to date and Titans took a giant step forward in its story. With only six episodes left this season, it’ll be interesting to see how, or if, Red Hood/Jason can be redeemed as well as seeing what Raven/Rachel has been up to (it’s hard to believe we have yet to see her this far into the season).