Interestingly, despite the title, it does not star Bruce Wayne, instead the animated film will feature Damian Wayne as the “Little Batman”. The premise is what happens when Damian is left alone in Wayne Manor and supervillains come to tear it down. 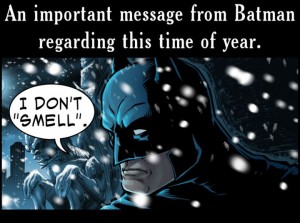 Hopefully, this Christmas special will be ranked better than Christmas With the Joker or the amazingly-named Brave and the Bold episode: Invasion of the Secret Santa. As Bat-fans know, nothing goes better together than Batman and Christmas!

Mike Roth of The Regular Show will executive produce and direct the film. Morgan Evans of Earth to Ned will write it. Cartoon Network will air the holiday-themed special on its weekly ACME Night block. ACME Night is a block of shows and movies that is designed for both kids and parents to enjoy together.

Among the other holiday-themed specials to come are the Steve Urkel-led Did I Do That To The Holidays? A Steve Urkel Story.

However, Merry Little Batman does not have a premiere date yet. After it airs on Cartoon Network, HBO Max is expected to carry it.