Review: The Other History Of The DC Universe #5 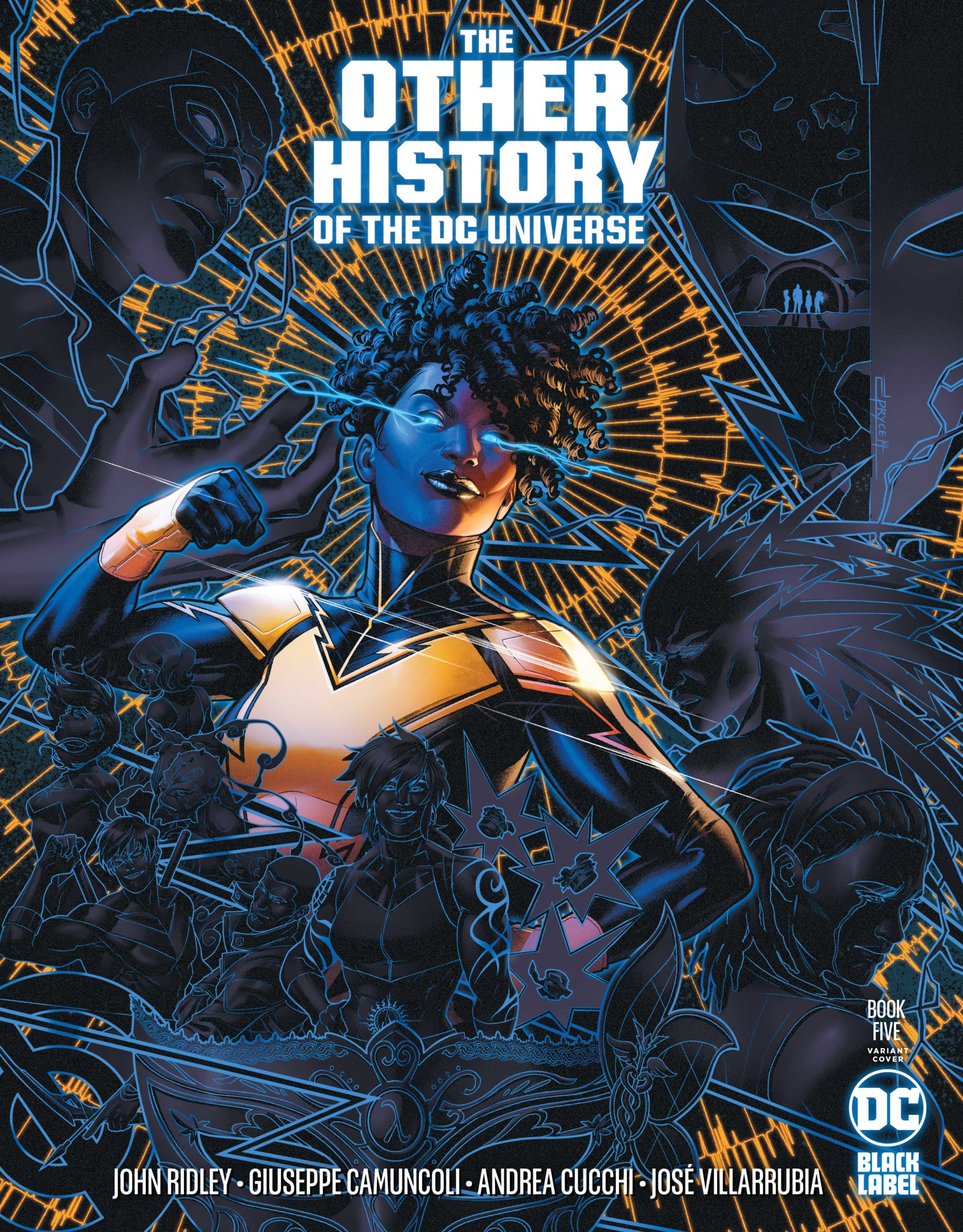 The Other History Of The DC Universe #5 is upon us, and as with every previous issue in the series, it’s amazing and insightful. Telling the story of Anissa Pierce, the eldest daughter of Jefferson Pierce, readers get her point of view of her life.

Standing In A Great Shadow

Having heard Jefferson Pierce’s story and POV in the first issue of the series, we now see some of these moments from the eyes of one of his daughters. Anissa tells readers the tale that is her life, from the divorce of her parents to learning the truth of her Father’s Alter Ego as a superhero and metahuman. This is a huge secret for a young child to have to cope with, and it’s devastating to watch her family go through everything that they do.

Then the genetic curse strikes, and Anissa has bigger things to worry about.  With skin so strong that even a bullet cannot pierce it, she has the want to do what’s right, serve her community, and fight for justice. This is familiar calling for heroes throughout the ages, but her parents are firmly placed in her finishing her schooling before grabbing the cape. 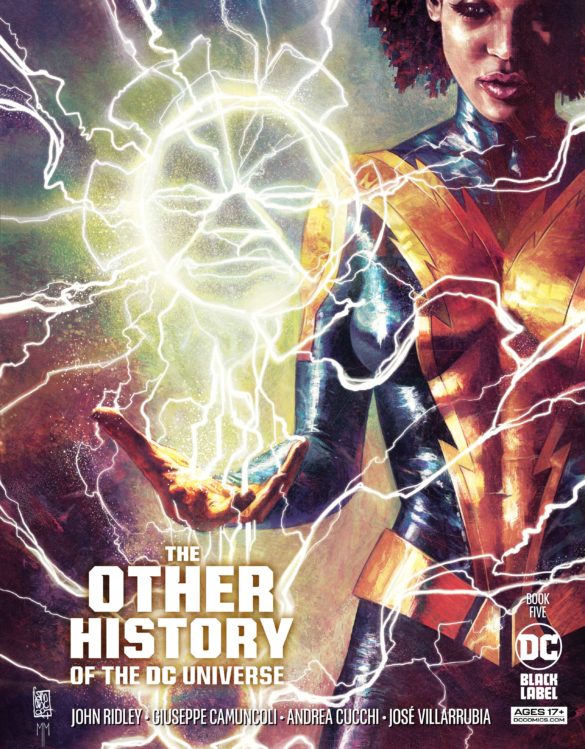 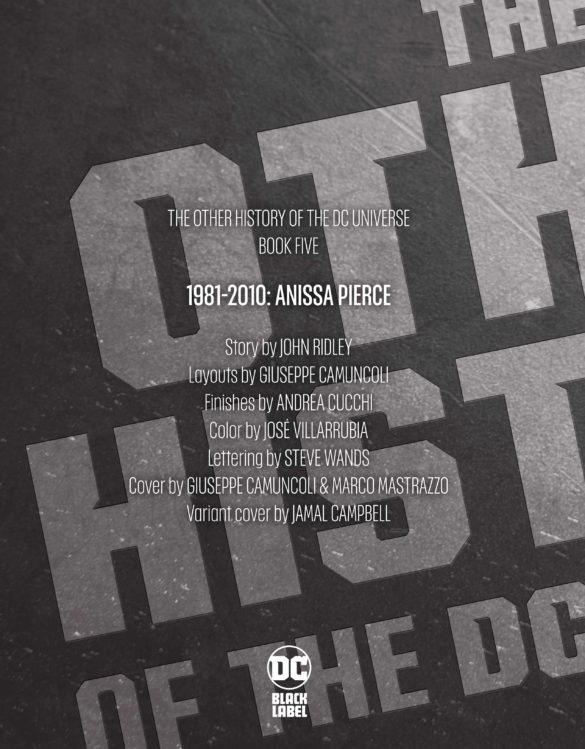 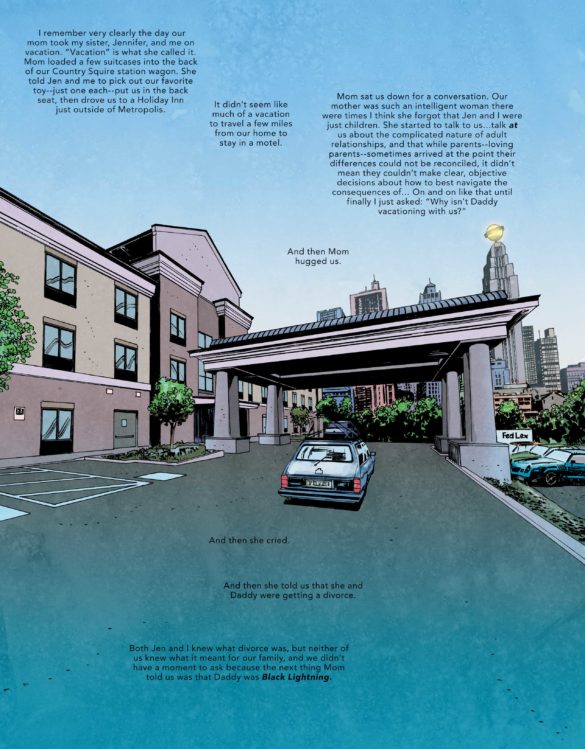 As Anissa matures and womanhood comes upon her one of the things she realizes real quick is that her feelings for men are not the same as for the women around her. This is something she keeps to herself by choice, but an encounter with a familiar man named Dwight cements this fact when she learns her Father may be Homophobic.

“Sometimes living in secret is so much better than living out loud.”

Growing up is hard to do, but the deal with her parents lived up to by Anissa, she moves forward against her Father’s concerns to don her costume and help New Orleans. She does however take her Father’s advice about using a blonde wig as concealment, so her days as a hero begin.

Choosing the name of Thunder and striking her own path seems fluid to Anissa, but one night she bites off more than she can chew and thankfully gets an assist from Roy Harper. He offers her a position with The Outsiders, a group different from others because their goal is to stop the bad guys BEFORE things gets out of hand. This seems like a good choice to Anissa. 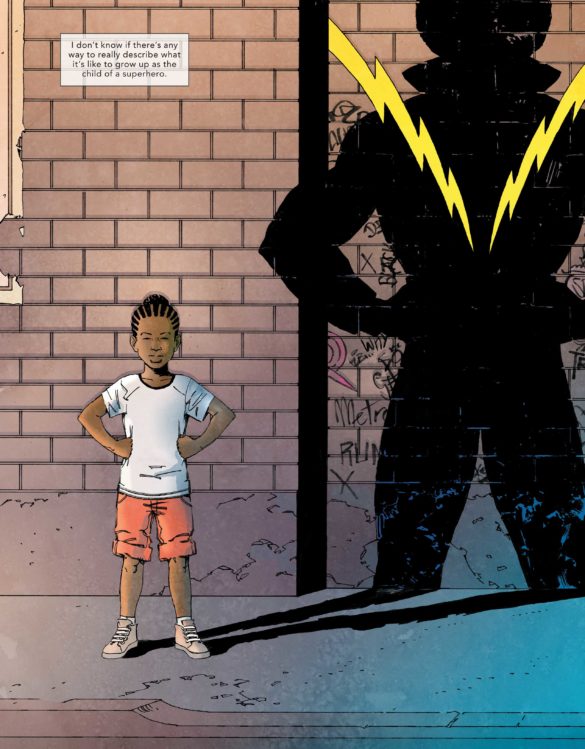 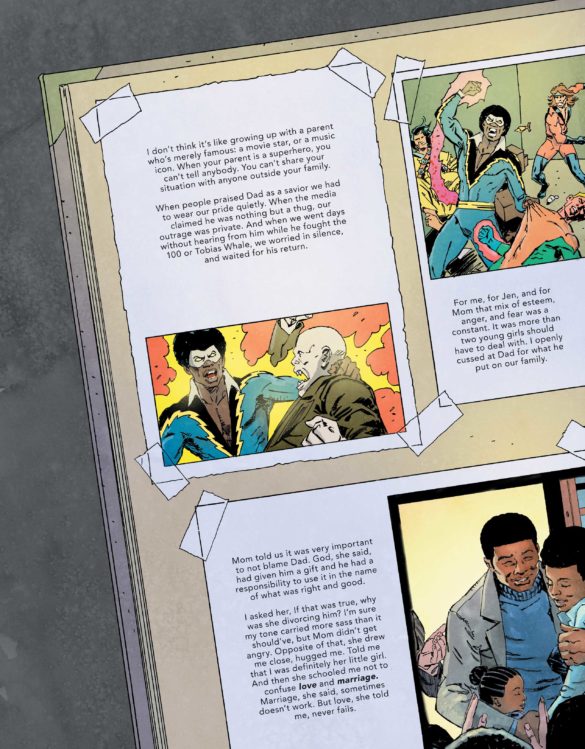 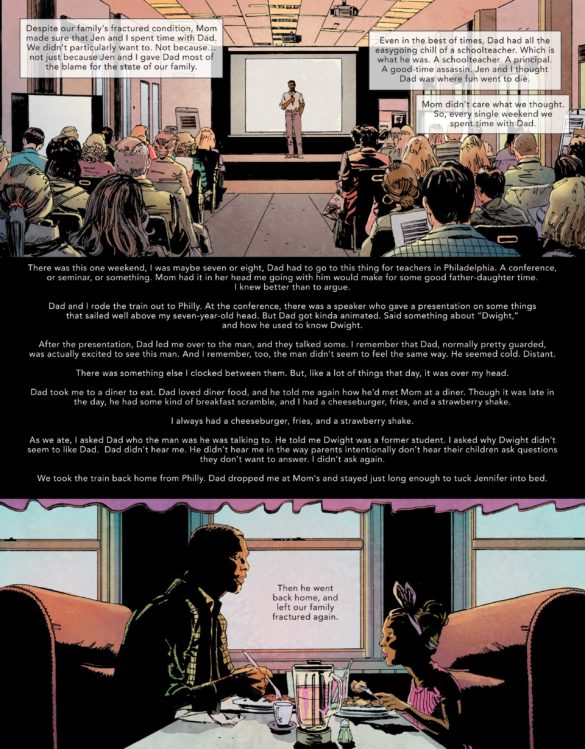 Then their first mission comes and reality hits Thunder in the form of Sabbac. The villain tears his way through the ranks of The Outsiders and Anissa finds herself taken down a few rungs. Her Father steps in and even though she stands her ground, they end up fighting side by side to take him down.

Anissa goes through so many phases of her life, not only with The Outsiders but also with her family. She forms a bond and later a relationship with Grace, watches her sister Jen struggle the same way she did when her own curse strikes, and her powers become uncontrollable. Her situation is dealt with differently and it causes a further rift in a family already holding on by bare threads.

“The same eyes that had looked to me for help now damned me with hate.”

As readers watch her story develop, the ups and downs that are perfectly framed by the real life events, synced into the comic world seamlessly. As a reader you cannot stop from being captivated, both emotionally and intellectually.

The Other History Of The DC Universe #5 is yet another gem in this series. Each issue has been informative, and seeing the different facets and histories of the characters through their own eyes is fascinating. The writing for this series has been stand up encore applauding. Learning all these new histories that meld with our world and show raw glimpses into life make the world and the characters in DC even more real… Genius.

“As individuals we stumble. Alone we fall. But as people together, we rise.”