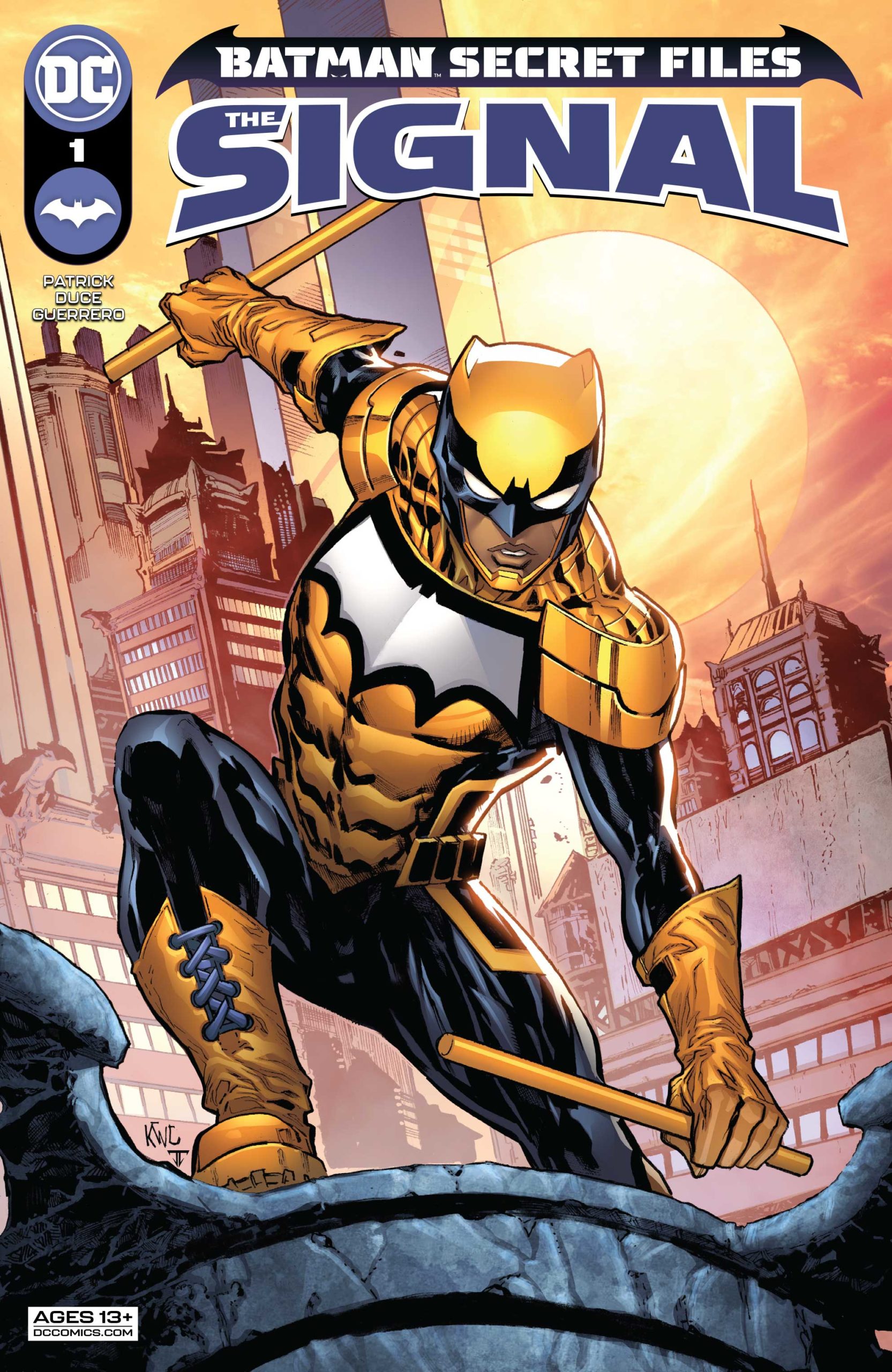 Time for some Batfam! DC Comics has delivered a new series, and the first issue’s starring a favorite; Mr. Duke Thomas, alias, The Signal. Batman: Secret Files: The Signal #1 is written by Tony Patrick (who co-wrote Duke’s introduction to the universe with Scott Snyder in Batman and The Signal). As a fan of the only metahuman who was allowed to become not just a Robin, but a working partner of the no-metas-in-Gotham-Batman, this is an exciting series for me. We get to see The Signal put his unique powers to use and watch Batman place his trust in another person to protect his beloved city.

Duke Thomas has been assigned as Gotham’s daylight protector. One thing is for sure about the city, day or night is that she’s a mistress that gives mercy to no one, and Duke’s no exception. Patrick presents us with significant background on his character. He mentions the members of the We Are Robin movement to give us insight into what Duke’s purpose was before he was taken under the Dark Knight’s wing.

I love that we begin with Cass and Duke training, as Ms. Cain is another one of our favorite Bats. It hints that there are plans to develop narrative and bonding between characters. There’s also a brief mention of Jason Todd, Dick Grayson, and Damian Wayne’ Although their names just dropped, it gives a sense that family exists.

Found Family is a major theme in Batman stories, and The Signal’s tale does not stray from that. This concept has helped several disconnected youths, and adults, cope with real trauma and heartbreak. I love that this message is carried throughout the Bat-family. I’m sure that this will be a topic I bring up in future reviews of this series, and I’m looking forward to seeing more allusions to this theme.

I appreciate the cameos in Batman: Secret Files: The Signal #1, such as Cassandra Cain, in addition to Batman defending his choice in making Duke part of his team. There may be a lot of info-dumping, however, there’s a lot to explain and I loved the thorough world-building for Duke’s story. The text is also simple to follow and doesn’t overshadow the action or art.

The additional characters, such as The Signal’s previous company, adds to his purpose and constant striving for goodness. As we know, his parents were tragically taken away by the Joker, when he first began protecting the slums of Gotham. However, working for Batman means you target the core corruption, which unfortunately takes attention away from petty crime. This is an important analysis of the justice system, and how heroes of all sorts make sacrifices to target the bigger problem because, at times, that’s all one can manage. Bruce Wayne’s discussion with Xander and the White Market is an interesting one, and one I feel that will build up to a bigger problem that will ripple into crimes, large and small.

It’s exceptional to see the use of Duke’s powers as well! We see him manipulate light and use his Photokinetic vision and Precognition. It’s exciting to see, and the art pulls us in. Christian Duce and Luis Guerrero do a stunning job in this series, they’re a fantastic (dare I say dynamic?) duo. Duke’s powers involve light manipulation, something that can be a challenge to demonstrate, however, the artistic team manages to complete the effect. My favorite panel is the last shot of the issue, where the sun shines through the invisible outline of Duke. It feels very DC Comics, powerful, enriching, captivating, and leaves the heart with feeling something for the hero.

The dynamic use of yellow matches the character perfectly, as he is the protector of the day, and a sign of hope for Batman, as the Dark Knight clearly states during his discussion with Duke. The switch from vibrant yellow to dramatic blue is also well done and continues the immersion of the story, and clearly shows that you are, in fact, in Gotham City.

The fight sequences are well put together and the additional characters carry eye-catching designs. Overall, the art is more than pleasant. I particularly appreciate how everyone’s faces and expressions are even, and well designed.

Batman Secret Files: The Signal #1 is a great intro to a new series and a brilliant first issue. I’m excited to see where this goes, as the book is jam-packed with world-building lore and background, and it conveys the emotion of Duke Thomas very well.

Batman’s cameo is greatly appreciated, as we see him put his faith in the new hero by giving him one of the greatest responsibilities Batman has ever given to any sidekick or partner. It places immediate importance on this newer character.

If you’re a fan of The Signal and Bat-family lore, this is an issue to pick up!