With Harley’s possibly final film in the DCU coming up, James Gunn has started talking about some of Harley’s style inspirations for costumes that audiences will see in The Suicide Squad. Harley notably has at least two distinct outfits in the film. These have been revealed in previews, promos, or as toys that will be released soon.

The Suicide Squad release is just over a month away and we are on the edge of our seats with anticipation! I’m personally looking forward to seeing the woman power displayed onscreen from the best of fiction’s female antiheroes. Harley Quinn is probably the most iconic of these women, particularly because of her fashion choices throughout the DC canon. 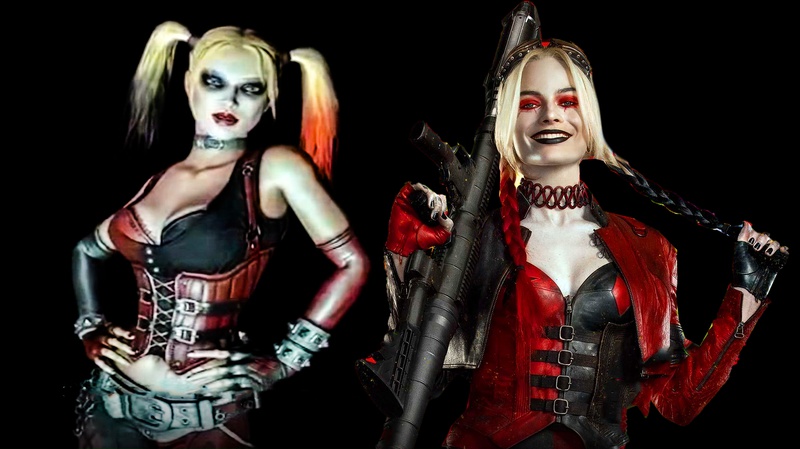 Harley’s first outfit (pictured above) is inspired by her appearance in the Batman: Arkham games. The iconic red and black really stand out and the corset-like top and hairstyle are clearly very similar to the video game’s counterpart. Gunn stated about this costume:

The truth is I had a huge map of all the different looks of Harley Quin throughout the years from various media, and one of them I like the best was the Arkham games look of Harley Quinn. Her first look in the movie is based on that. 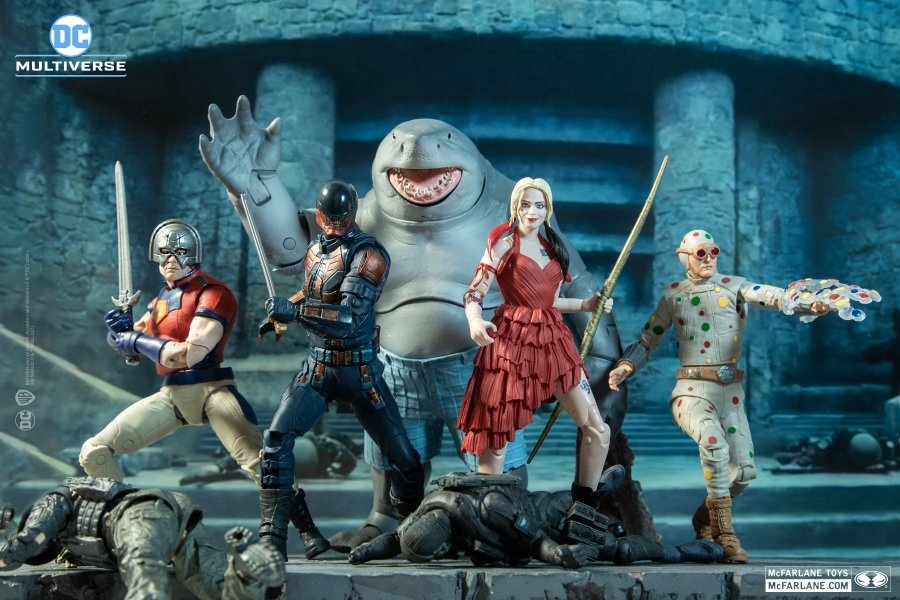 Harley’s second outfit is a gorgeous form-fitting dress that is modeled by the McFarlane Toys action figure above. This dress has been spotted in a few different promos. However, the action figure in particular really demonstrates the layers and ruffles of the red garment. According to Gunn, this Harley Quinn look is fairly unique, other than the obvious color palette:

Her second look in the movie is this beautiful red gown… I like it both as a beautiful gown, and I like it as it starts to get messed up a bit. I think it’s starting to create her own iconic look that’s different from the comics or cartoon or anything else.

Lastly, Gunn has described how he envisioned the various looks of Harley Quinn. Harley’s iconic color palette is very familiar to fans of the badass anti-hero. However, Gunn wanted to keep her designs fun and original:

…I knew I wanted to have something written on the back of her jacket motorcycle gang style. That’s where I came up with ‘Live Fast, Die Clown’.

The Suicide Squad reboot was always going to be different with James Gunn at the helm, but seeing his dedication and attention to detail through all the director’s interviews and generous answering of questions has definitely made it clear that Gunn is making the film both as a filmmaker and a fan.

There’re still a few weeks until The Suicide Squad arrives in theaters and on HBO Max. We will just have to keep contenting ourselves with Gunn’s behind the scenes tidbits until August.

What do you make of James Gunn’s Harley style inspirations? Please let us know in the comments.