James Gunn’s The Suicide Squad will be hitting theaters and HBO Max in August. In the meantime, Gunn is hard at work on finishing the Peacemaker spin-of TV show, and likely either finishing the script for Guardians of the Galaxy Vol. 3 or starting preproduction. However, despite being a busy man, he still finds time to tease fans on Instagram. There, Gunn has revealed that he would “definitely” direct a Harley Quinn stand-alone film.

Being the wonderful, yet accessible talent that he is, James Gunn did a Q&A on Instagram recently. One particular question that we’ve kinda all being wondering in the back of our minds, but haven’t had the opportunity to ask, finally made it before the writer/director. Being a fan of Harley Quinn, a user asked if Gunn would ever consider directing a stand-alone Harley Quinn flick. A man of seemingly few words when responding to fans, simply said, ” I definitely would[,] yes.”

Check out the proof below: 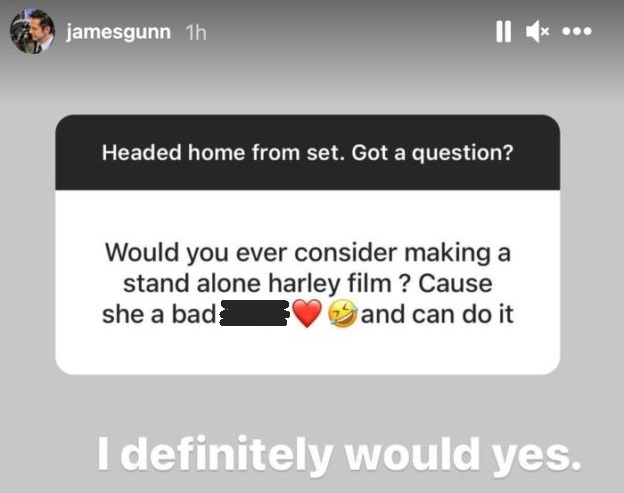 So, let’s just say I was aquiver with the excitement over James Gunn possibly making a Harley flick.

At the moment, public knowledge is that Gunn is currently only committed to two projects: Peacemaker and Marvel’s GotG Vol. 3. We don’t yet know if there’s anything else on the writer/director’s agenda. Most movies take about 1-2 years from conception to release, depending on how quickly a movie is rushed into production. With GotG Vol. 3 committing to a 2023 release date, we can safely assume that Gunn will be unavailable until then.

In a perfect world, TSS will make a billion dollars in theaters and HBO Max subscriptions, which would please Warner Bros. so much that they’d commit Gunn to an additional three entries in the DC universe. One of them could be another Suicide Squad movie, the second a Harley Quinn stand-alone film, and the last one of his choosing. Gunn could then be officially known as the man who saved DC Films (though, the 2017 theatrical cut of Justice League notwithstanding, they haven’t really needed saving. WB should hire me for these insanely smart decisions.)

In the meantime, we’ll just have to make do with The Suicide Squad, which hits theaters, and HBO Max (in the US) on August 6, 2021.