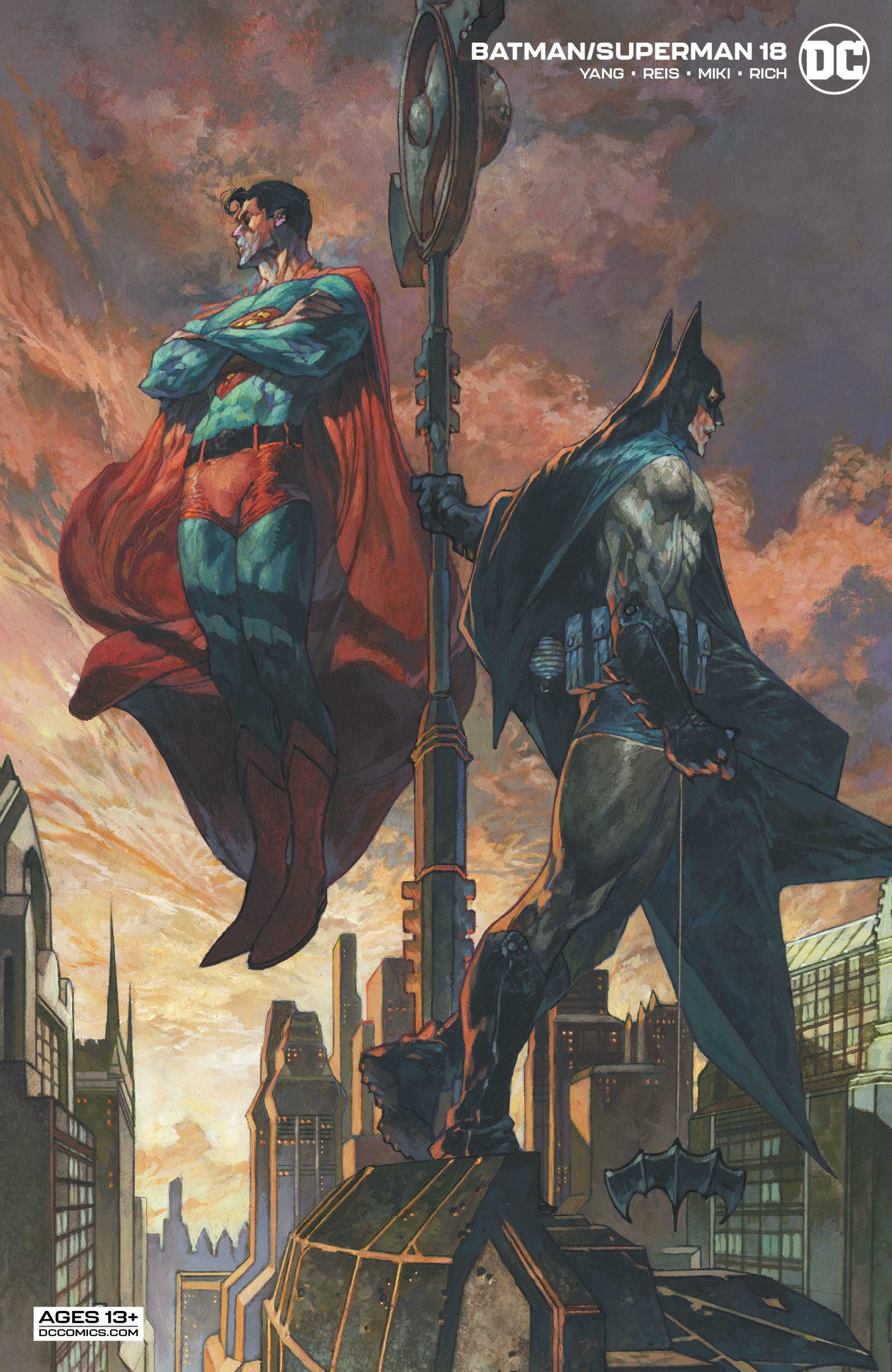 The meta-shenanigans continue in this week’s Batman/Superman #18, as our cinematic heroes glimpse “the realities behind all realities”.

The issue opens with Superman and Batman squaring off against a new villain named Auteru.10, the keeper of The Archives of Worlds. This is a satellite that houses various reams of film that also function as individual universes. Basically, as I mentioned in last month’s review, it’s a cinematic multiverse inside Earth-0.

If you read my last review, you’d probably think that this title is above reproach. I have sung the praises of this book for months now and, while I have to say that I was impressed by the vast majority of this issue, Yang’s opening sequence was somewhat clunky – specifically the dialogue. There are a handful of exchanges between Batman, Superman, and Auteru.10 that are flat-out cringeworthy. From Batman yelling “My helmet!” right when it’s cracked by Auteru.10, to Superman explaining  “I’m all right now that I’m away from Auteru.10’s Kryptonite ring”, much of the script’s dialogue states the obvious and therefore is unnecessary. Everyone knows that Batman’s worried about his helmet – it just cracked right before our eyes. Everyone knows that Superman’s going to feel better once he’s away from Kryptonite. 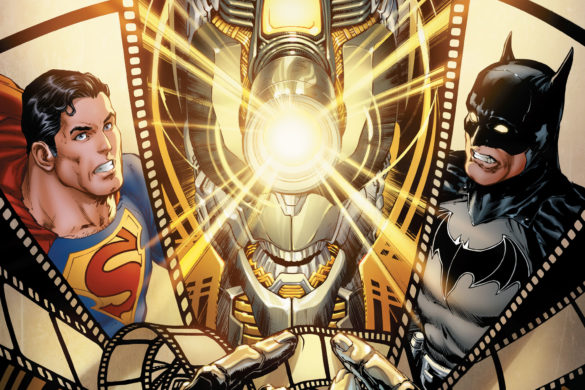 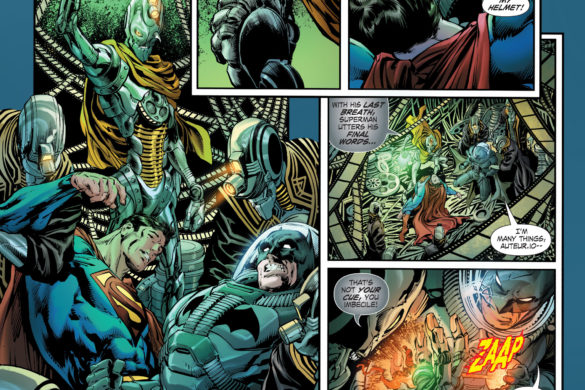 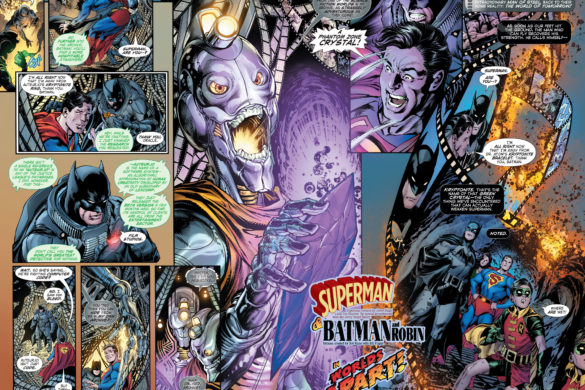 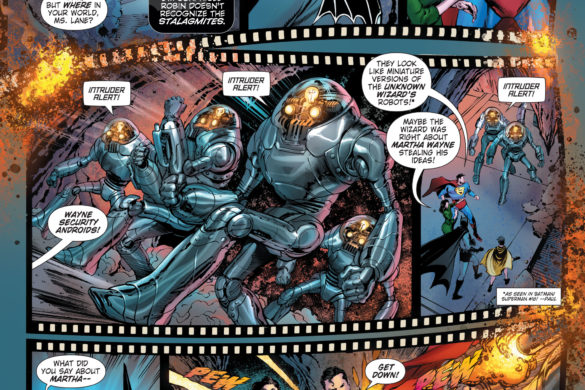 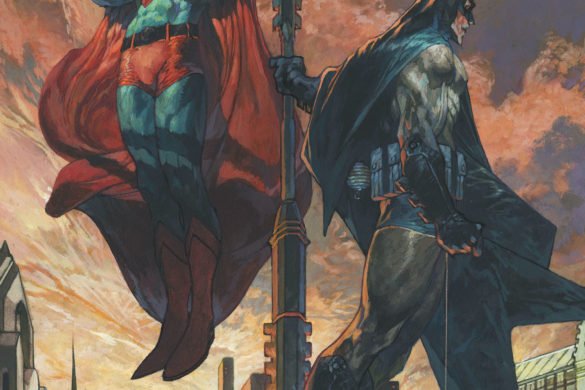 Then there’s an awful exchange between Auteru.10 and Batman… I reflexively uttered a groan. Now, these exchanges happen in the first 2-3 pages of the story, and once the issue shifts gears and focuses on the cinematic Batman and Superman, the script quality reverts back to its former glory. Frankly, it was jarring how that awkward start transitioned into brilliance. Honestly, I have no explanation. Maybe Yang was up late when he wrote those scenes? Who knows?

Okay… So Maybe Some Things Are Perfect

While Yang’s script was somewhat uneven, Reis’ art didn’t skip a beat. The book is unsurprisingly stunning. Also, at first I didn’t notice that Jose Luis was also given credit for penciling this issue. It wasn’t until I looked at the credits on the last page that I saw Luis listed as a co-penciler. The art is seamless. I couldn’t tell you who drew what, as nothing in the issue aesthetically seemed inconsistent. Batman/Superman #18 maintains the cinematic trappings established in the previous two issues. Reis did a great job setting a tone and style for this story, and Luis seemed to roll with the punches. Luis hasn’t worked on a DC title since 2017, so it’s nice to see someone from the old guard flex their muscles. Essentially, the art is flawless.

I know I spent a chunk of this review ragging on the first few pages of dialogue; please don’t let that dissuade you from reading this title. I cannot stress how great the story and are have been for the last few issues. Yang has proven himself to be a creative powerhouse, as Batman/Superman #18 is bursting with neat ideas. As for the art, well… Reis is Reis. The name alone speaks for itself.

Final Verdict: The pros outweigh its very few cons. Give it a read.