Time for all the armchair psychologists to get excited, as the comic debut of Dr. Chase Meridian was teased in Batman #108.

There’s a scene in Batman Forever where Bruce Wayne (Val Kilmer) asks Dr. Meridian (Nicole Kidman) why she has a creepy portrait of a bat in her office, and she’s like “that’s a Rorschach blot, people see what’s deep in their psyche”, and Kilmer is just “uh oh”. Kidman is clearly thinking to herself “bat in his psyche, hmmm…” Then they go on a date to the circus. To be fair no one was going to see anything but a bat in this particular Rorschach blot.

Anyway, Meridian’s big contribution to the plot is using her years of training and study to deduce that Bruce is angry and the Riddler is nuts. Oh… and she gets taken hostage by Two-Face. 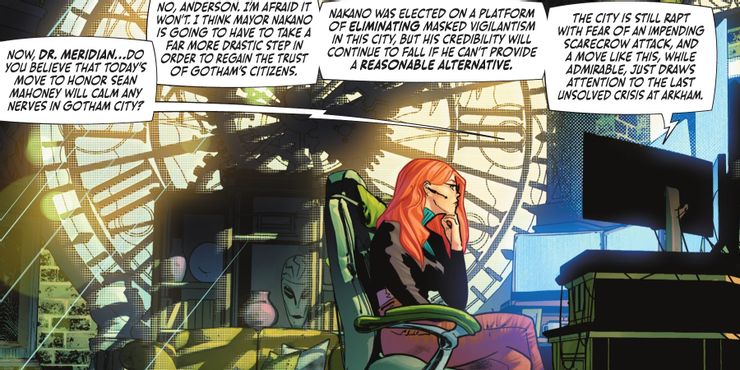 Why, yes, I can write prescriptions.

The character then briefly showed up in Legends of the Dark Knight back in 2013, where she deduced that Bruce is angry and the villain is nuts…. and she got taken hostage.  This is all just prelude to what will undoubtedly be a bold new spin on the character in the pages of Batman.

That’s right, the (canon) comics debut of Dr. Chase Meridian was teased in Batman #108, and she will no doubt prove integral to a storyline full of intrigue and action.