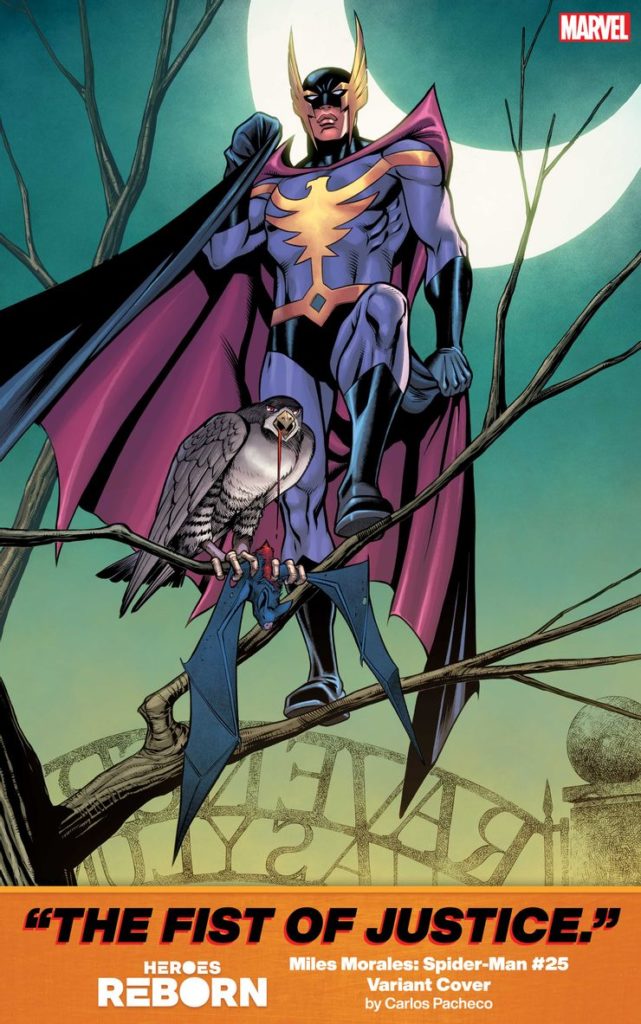 Best meat’s in the rump

Yes, the other “big two” publisher, Marvel Comics, is about to embark on an old-fashioned warped reality storyline titled Heroes Reborn.

Due to some villainous machinations, that will no doubt seem silly and over-hyped a few years down the road, the flagship team of Avengers will be wiped from history and replaced with Marvel’s longstanding JLA pastiche, the Squadron Supreme.

In a none too subtle swipe, an alternate cover of Miles Morales: Spider Man #25 will feature Batman analogue Nighthawk posed above a hawk eating a bat. The intended message being that this guy is going to be even more Batman than Batman? Because he’s a hawk? Like… a hawk that hangs out at night?

Marvel’s zinging of DC will no doubt be seen as a third degree burn by their fanboys, but this is just a silly (but fairly cool looking) cover, at the end of the day.

As far as pastiches go, the Squadron Supreme aren’t bad characters. Their eponymous 12-issue limited series by industry legend Mark Gruenwald was an entertaining and well crafted precursor to Injustice: Gods Among Us, in which a global tragedy inspires the Squadron (in a different reality than the primary Marvel one) to become benevolent dictators.

Nighthawk, just like Batman, becomes the leader of the principled resistance. The series culminates in tragedy when a series of missteps by both sides leads to a bloody battle royal that only ends when the survivors become too heartbroken to continue.

In the years since, the Squadron characters have mainly served as jobbers and cannon fodder, and I doubt their status as top dogs will last long. Marvel will then no doubt still claim to have scored some quick points with this cover of a bird eating a bat’s butt.