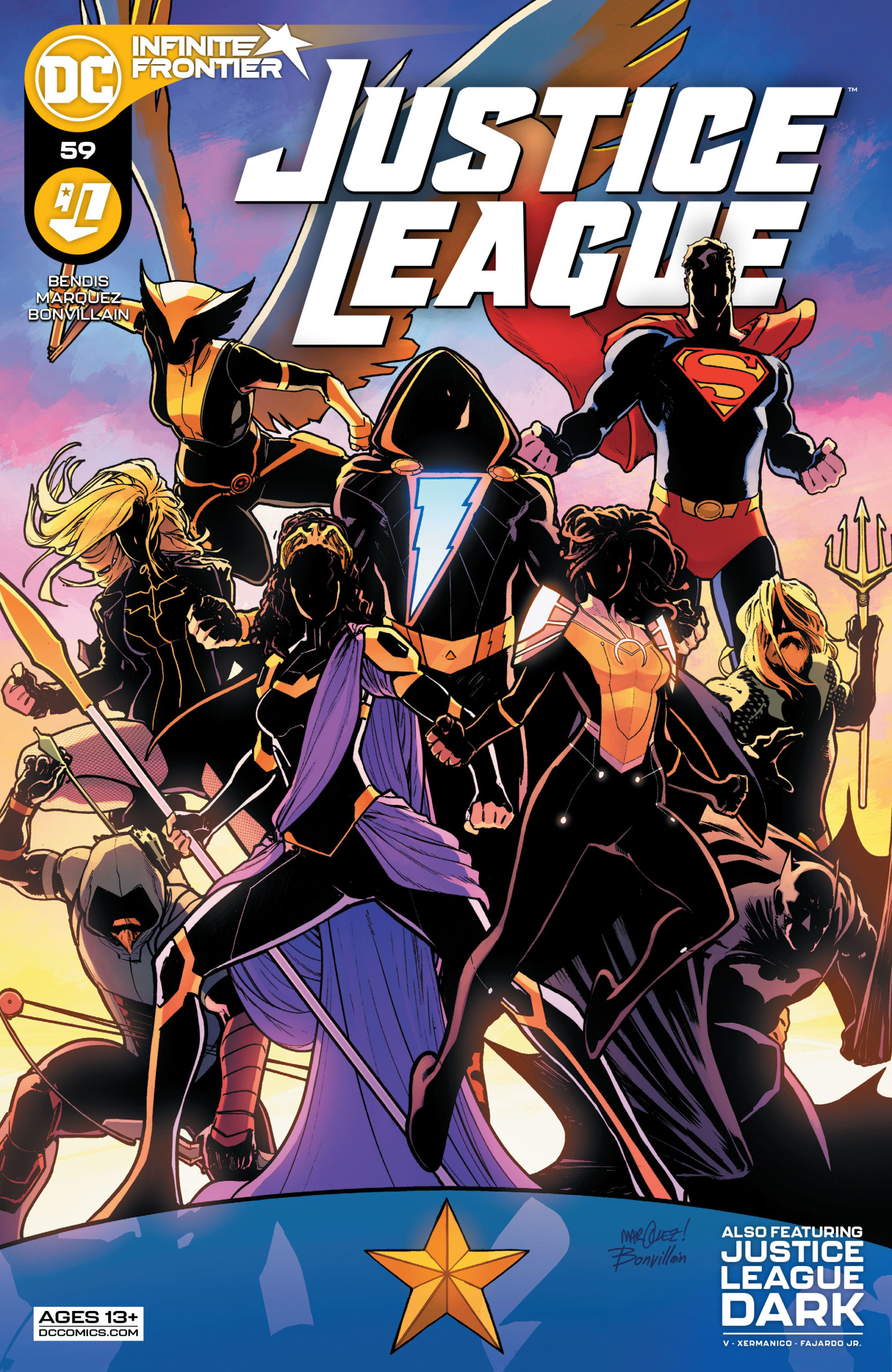 It’s a new day for the League, as they square off against a new villain with the help of an old foe, in this week’s Justice League #59.

Dark Knights: Death Metal is over. Future State has finished, and now The Infinite Frontier is upon us. , and Brian Michael Bendis leads the way with his first issue of Justice League. However, the story starts in the strangest of places.

The issue opens in Kahndaq: the home/kingdom of Black Adam. Justice League #59 accomplishes quite a bit with minimal pages, now that Justice League Dark is a back-up. Bendis has, what feels like, a short amount of space to tell his story. Mind you – a handful of these pages feature Black Adam and Brutus duking it out, so this might be a contributing factor behind this feeling. That being said, Bendis manages to plant the seeds for his run within the allotted 20 pages. He introduces what will assumedly be new team members, and a new threat. 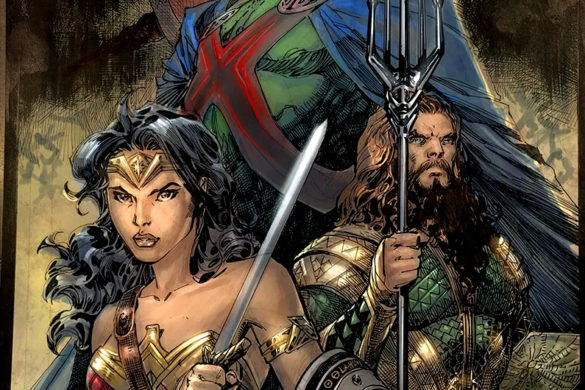 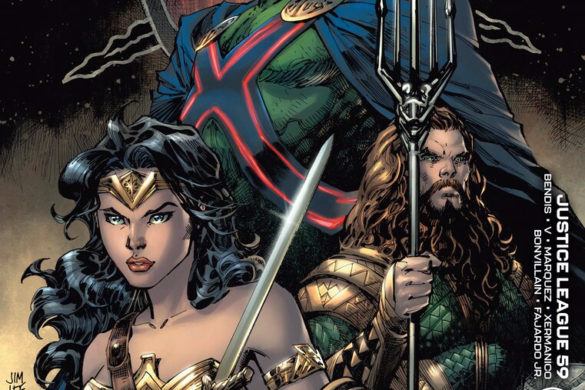 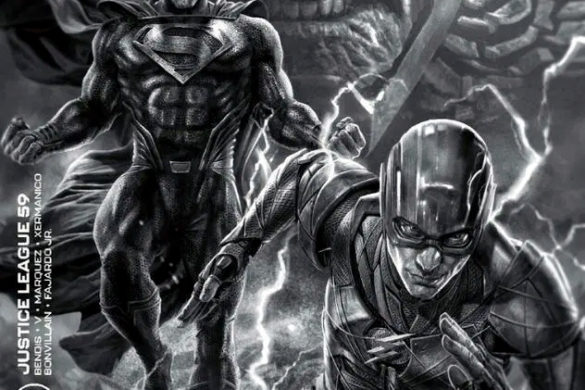 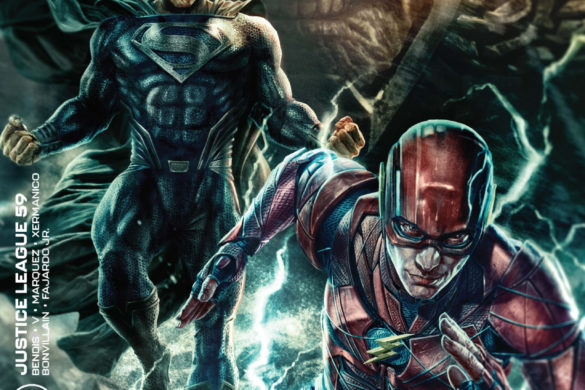 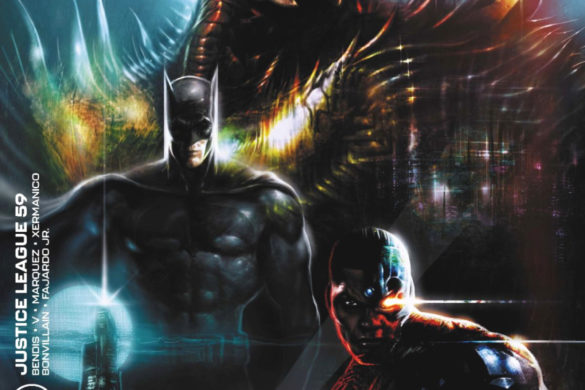 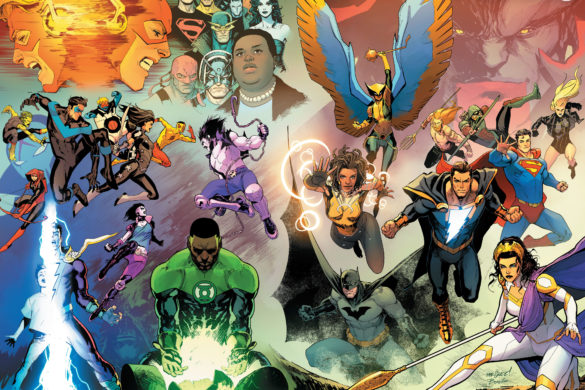 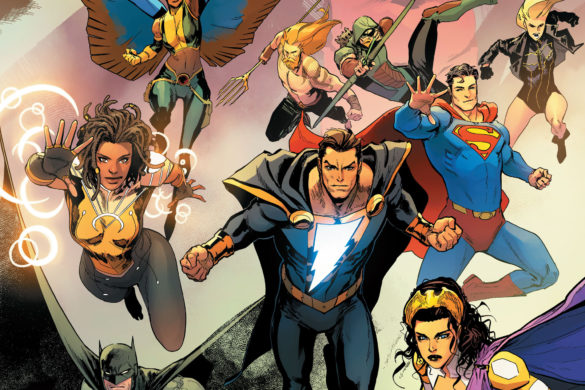 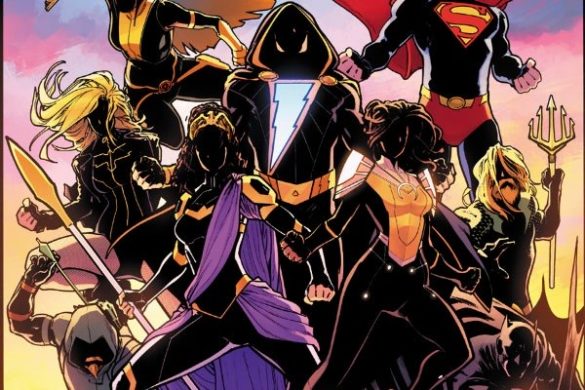 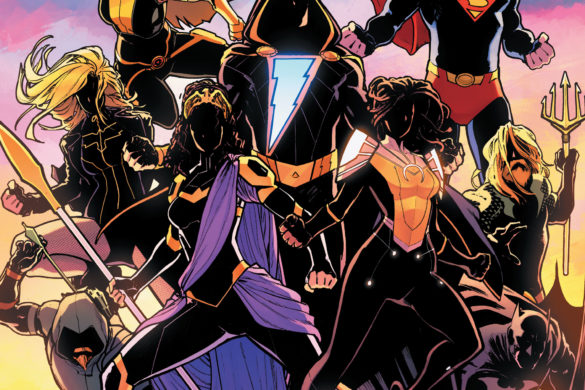 Speaking of new team members, let’s take a moment and chat about Black Adam. While many of you might be sceptical of this character joining the Justice League, I’d like to point out that this isn’t the first time he’s “switched sides”. During the late 90s and early 2000s, Adam spent some time as a member of the JSA. While he ended up on the wrong side of the law during Villains United/Infinite Crisis, he spent much of 52 trying (albeit unsuccessfully) to be a hero. My point is that there’s precedent here.

I have a confession: Black Adam is my favorite super villain of all time, because he’s… complicated. While having murderous, sociopathic tendencies, he’s also tragic – having seen his family murdered right before his eyes (52). Also, like all great villains, he believes that his cause is righteous. As the king of Kahndaq, he simply wants to be a great ruler. It just so happens that he has some tyrannical impulses that get him into trouble.

With regards to this incarnation of the character, Bendis leans into Adam’s brooding qualities. He paints him as a quiet, tactical yet somewhat impulsive individual. He’s a man of few words who responds quickly to dangerous situations. Following up from his prelude in Infinite Frontier #0, Bendis also captures the character’s more redeemable qualities, early on in the issue. There’s a rather poignant scene where Black Adam interacts kindly with a small Kahndaqi boy.  Ultimately, it seems that Adam will serve as a Superman foil in Bendis’ run, which I think will work fairly well. Their powersets are similar, but their values are very different. Yet they have just enough in common that Black Adam could be just the guy to keep the Man of Steel on his toes. 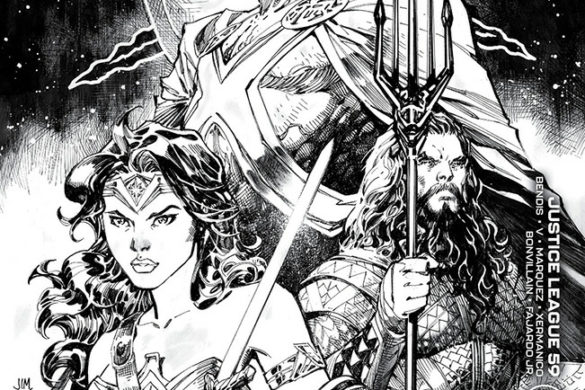 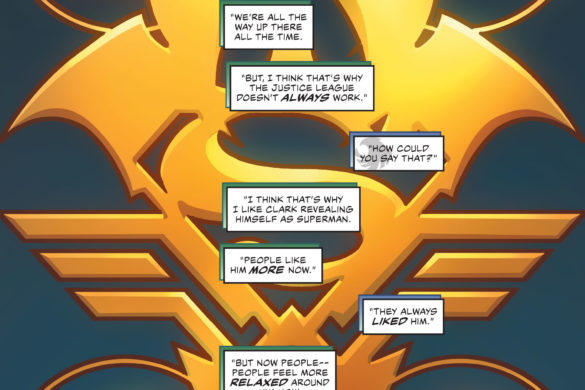 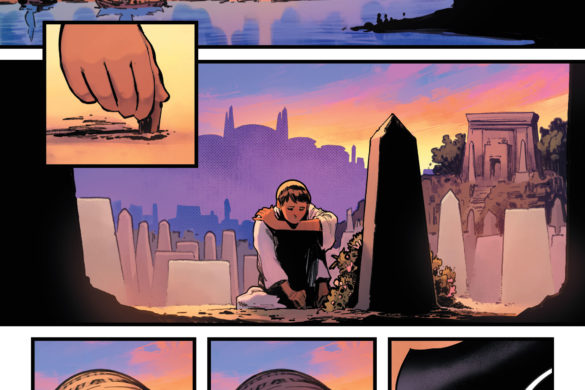 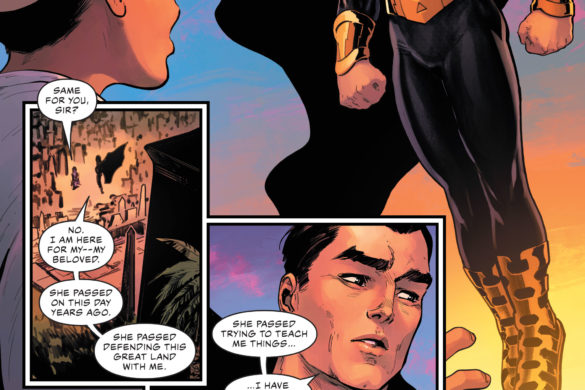 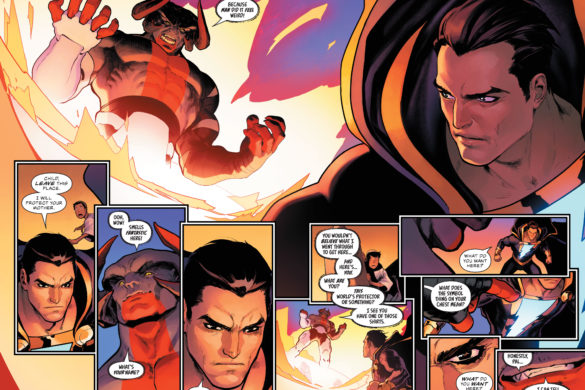 With regards to art, David Marquez knocks it out of the park. Seriously, I’m lacking a superlative to describe his work, nevertheless, I’m going to do my best.  His lines are smooth, detailed, and vibrant. His work is almost electric, teeming with energy. The fight scene between Black Adam and Brutus is a wonder to behold. These scenes are dynamic, full of bombast, rendered in wide-screen high definition. What makes Marquez’s work so effective is his panel structure. Each page has a unique, atypical layout that adds to the kinetic nature of the issue. It’s incredibly eye-catching, and does wonders for the issue’s pacing.

This is the second time that Marquez has had the opportunity to draw a large cast of DC characters, after making his debut at DC on the first arc of the current volume of Batman/Superman. Working with Joshua Williamson on the “Infected” arc, Marquez got to draw all kinds of characters, including Shazam, Supergirl, and The Batman Who Laughs, as well as the title characters. His work on Batman/Superman was superb, but Justice League #59 is even better.

The issue opens with John Constantine and Zatanna, investigating a pair of cults out in New Mexico who have gathered in response to a pair of prophecies about a coming war. Both heaven and hell were predicted to appear in this place offering gifts for this imminent battle. Upon their arrival, the two discover an all-out brawl between the two cults, along with a bloodied ally with a warning of his own.

Storytime: When I finished Future State: Justice League #2, I was furious with Ram V. I assumed that the Justice League Dark backup story was tied to the Future State event, and therefore done. For those of you who read that story, you’ll remember that it ended on a massive cliffhanger. At the time, I was so angry thinking that Ram V was never going to return to this tale. I then wrote up a snarky review that vented my frustrations and sent it to the Dark Knight News site editor: Steve J. Ray. Well, Steve apparently has his finger on the pulse of this story, so he kindly informed me that Ram’s upcoming story would serve as the backstory to the events of Future State. Needless to say, my review was heavily edited.

All of that said, I’m terribly excited. Having tipped his hand during Future State, Ram has a great Merlin story to tell that will feature a slew of magical characters from the DCU. There’s a magical war coming, and based on what was revealed in the Future State issues, things are about to get ugly, as Ram’s tale will recount Merlin’s ascension to power. Heads up – it’s gonna be a blood-bath. 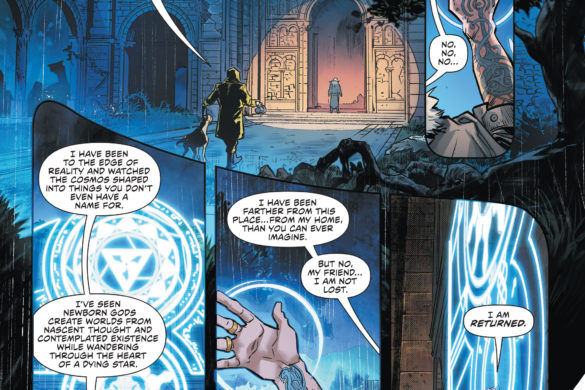 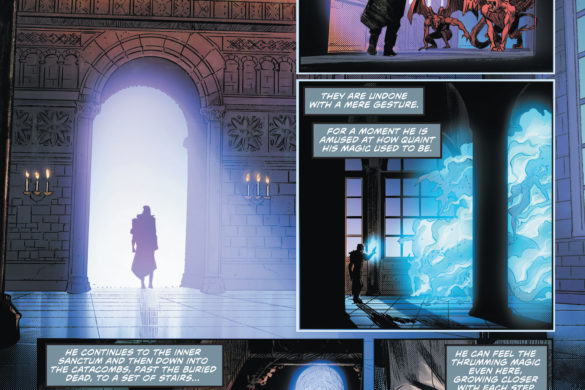 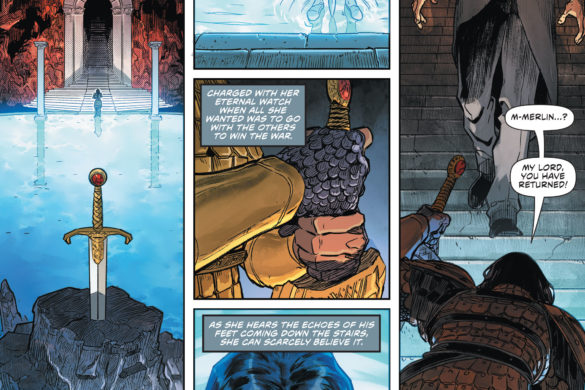 Justice League Dark isn’t Xermanico’s first attempt at the high fantasy aesthetic, as he penciled the Justice League Death Metal crossover issues, which featured (among other things) Nightwing dressed as a barbarian, traversing a Middle Earth version of the DCU. Xermanico brings all of that experience to this title, and it’s beautiful. Plus Romulo Fajardo Jr. does a great job with the coloring, as his dark pallet does a great job reinforcing the mood of the story. In short, this is a good-looking backup.

Justice League #59 is a home run, as both creative teams knock it out of the park. Bendis’ script is fresh and exciting, and Marquez exceeded my expectations (which were pretty high to start with). Ram V’s Justice League Dark tale is extremely engaging, particularly after glimpsing what’s to come during Future State. Xermanico also rises to the occasion once again, with a hyper-detailed, swords-and-sorcery aesthetic. The only critique I have for the issue is that it felt too short. Don’t misunderstand me, I didn’t feel short-changed by the page count; rather, I was left wanting more. That’s a sign of a great book.

Final Verdict: Justice League was billed as the cornerstone of the Infinite Frontier era in DC comics. If this is the direction they’re heading, count me in.