It’s been a blossoming relationship since 1993, and a friendship that began in an episode of Batman: The Animated Series. As Paul Dini said to Yahoo Entertainment 4 years ago:

It was fun to give Poison Ivy a friend, because she has never had one. She’d had underlings, and people she mind-controlled, but she never had anybody who accepted her for who she is.

27 years later and their friendship has become a love story, so now we’re being treated to a first look at the Harley and Ivy wedding in the Injustice: Year Zero digital first comics series.

Fans will all know that the relationship between Harley and Ivy has been getting more and more serious over time. In a 2016 issue of the DC Comics series ‘DC Bombshells’, we saw the first kiss between the two characters. We’ve also seen the relationship really grow in the DC Universe (now moved to HBO Max) show Harley Quinn.

Now, we’re getting wedding bells, as Harley and Ivy tie the knot, in the latest issue of Injustice: Year Zero prequel series. This book is set before the series which was inspired by the Injustice video game, and set in an alternate reality where Superman in the bad guy. Expertly written by Tom Taylor, issue 8 of the comic book series will see Harley and Ivy getting wed by an Elvis impersonator in Las Vegas. 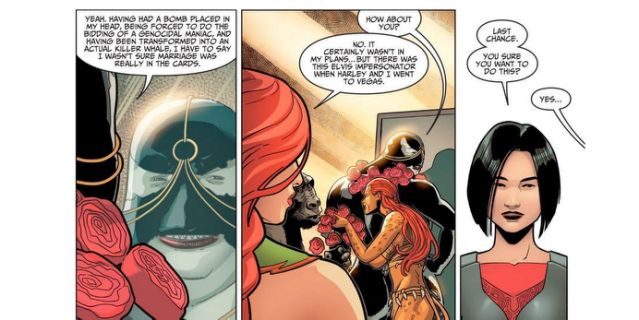 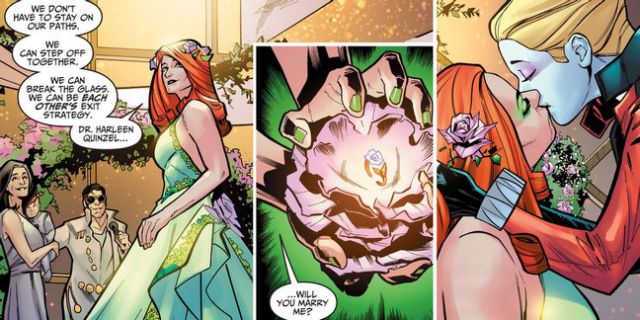 Harley Quinn co-creator Paul Dini has already given his blessing, saying in 2016:

I’m all for it.  I think their relationship is progressive, and the sort of thing that needs to be in comics. It’s fun to show that even the bad girls can be nice to each other, and there can be love and affection between them. It’s actually a much stronger relationship between them now, because it involves personal choice.

Like Paul Dini, I am up for this myself, although knowing that future events in this series show that it will end in tragedy. Maybe the ladies will live happily ever after in actual canon continuity, though? Here’s hoping.

What are your thoughts on this?  Please get in touch and let us know.

Batman Beyond Ending in December