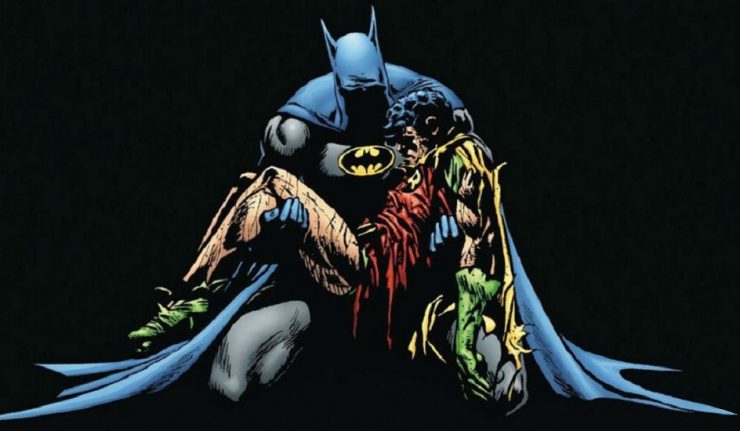 Back in July, DC shocked fans when they announced that Batman: Death in the Family. will be released as an animated feature. It would revisit one of their greatest movies, Batman: Under the Red Hood, but would also honor their huge interactive event from the late 80s, when fans decided the fate of Jason Todd. This time, instead of calling one of two numbers to vote, we’ll be able to make our own choices and explore various branching storylines, in the same vein as Netflix’s Black Mirror: Bandersnatch. At DC FanDome yesterday, they held a panel to discuss the movie, where they released the opening credits..

During DC’s massive event titled A Death in the Family, there were two 900 numbers which allowed fans to cast their vote on whether Jason Todd lived or died, at the hands of the Joker. Jason was kidnapped, brutally beaten, and left behind in a warehouse rigged to explode. Jason Todd’s demise was decided by an incredibly small margin. Of course,his death had a significant impact on Batman stories moving forward. It eventually gave us Batman: Under the Red Hood. This story was eventually adapted to one of the best DC animated movies ever. Now, we’ll get to revisit that movie, and also have an incredibly cool cinematic experience.

Revisiting one of the greats

The panel unveiled a lot of new stuff such as the inclusion of Two-Face, voiced by the great Gary Cole and the expanded role of Talia al Ghul, voiced by Zehra Fazal. The panel premiered new clips featuring Two-Face and Jason’s downward spiral into becoming Hush. This particular clip looks like one of the branching stories where Jason survived his attack and it’s incredibly haunting.

Here are the opening credits to Batman: Death in the Family:

Overall, the opening credits are pretty neat-looking. They tell a story with silhouettes, almost like cardboard cut-outs. A great exercise is doing a lot while using a little. It’s such a great prologue that I’d watch a whole short film in that style.

Vietti spoke at great length about the flick, mostly motivated by the desire to honor Judd Winick’s original work. Having worked with him on the adaptation of Under the Red Hood, he recognized the themes of family and fatherhood. It’s those themes that motivated this work. Vietti explained that:

Every branch has that theme of fatherhood and family at the core of it.

Another piece of insight that fascinated me was the fact that Vietti approached this material with a slight lean in favor of a horror movie. In the end, considering what happens to Jason, and what could have happened to Jason is pretty horrific.

Vincent Martella expressed his excitement with the opportunity of not only revisiting the character, but the opportunity to explore the different outcomes and directions of his fate. He exclaims:

I think people are going to like the places where Jason Todd is going to go. It’s very exciting and unexpected in a lot of ways.

At the end of it, the moderator asked the three panelists if they could go back to the 80s and call the 900-number, what choice they’ would have made? All three decided that they’d spare Jason Todd. The moderator commented that they were making the compassionate choice, but Vietti countered about whether living through that is really compassionate:

No matter what the choice, this pivotal moment serves another great story, one that we’ll get to see unfold on October 13th.

DC Showcase: Batman: Death in the Family hits shelves on October 13th. You can pre-order it here.