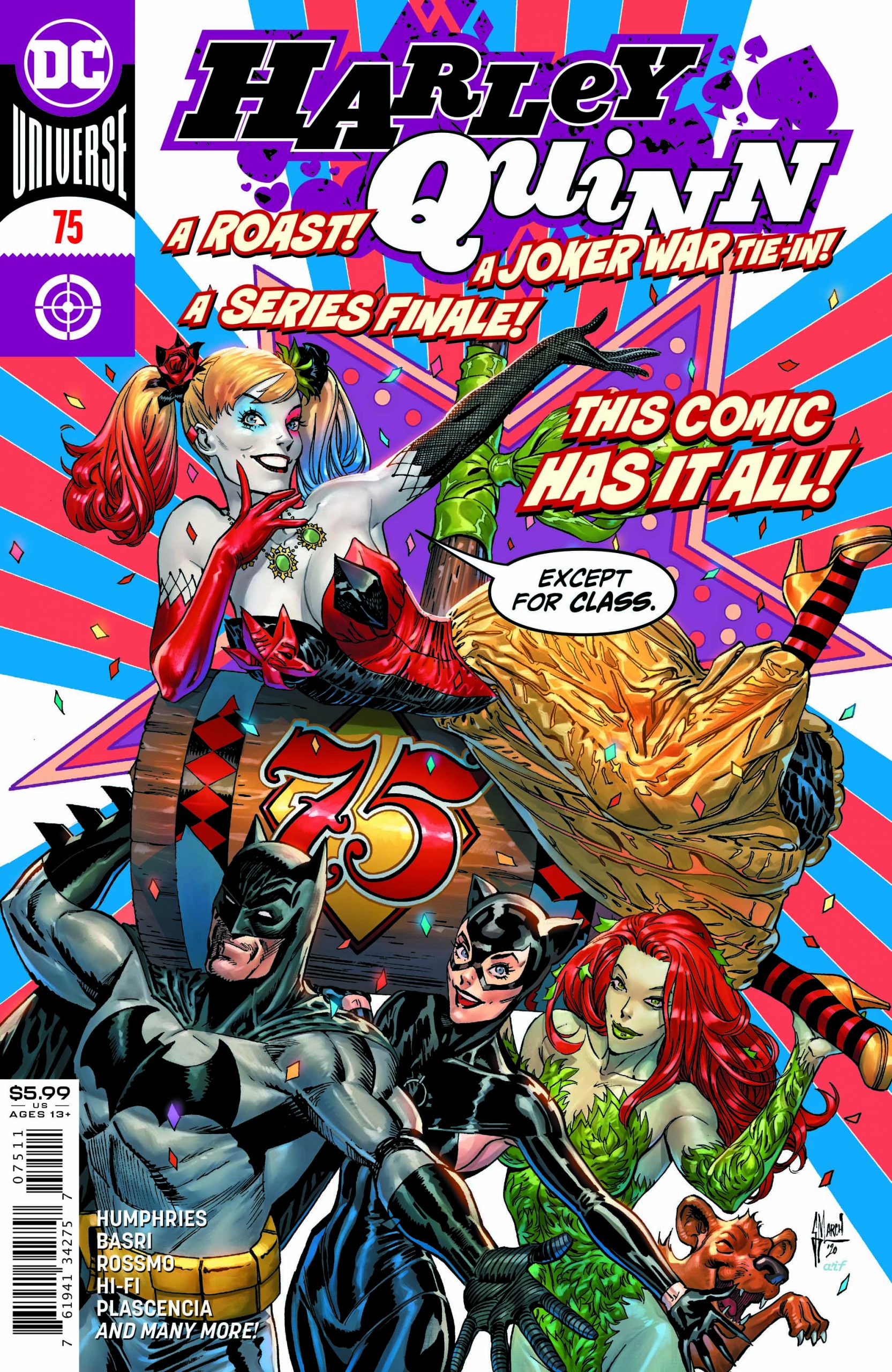 Harley Quinn #75 is here, the final issue in the current run of the title. I’ll be fully honest readers, this was a struggle to conquer. I joined in on the series back with issue #50, and found that my love for this character was not only renewed but fully reignited. This was my step back into comics, on a monthly basis, for the first time since “Blackest Night”, and “Brightest Day”. Sure I would pick up books here and there, but my love had waned. Funny that all it took was a smart mouthed clown with a heart o’ gold to draw me in, and make me never want to let go again.

Which is probably why it’s so hard to say goodbye, when it feels like just yesterday that I was saying hello again, and patiently waiting for the next trip into the Harley universe. I admit to being spoiled, because when I started really getting into this series, readers were treated to Old Lady Harley, Harleen, Harley Quinn: The Animated Series, Breaking Glass, etc.  Some groundbreaking work that just deepened and expanded on a character that really deserves the love.

Enough dilly-dallying! Let’s dive into this review for Harley Quinn #75.

Get Out Of My Dreams

It’s bittersweet farewell indeed, one that gives us Bernie sounding off the Happy Birthday Roast of Harley Quinn. Tied up and forced to endure the ribbing, Harley’s surrounded by a plethora of different versions of herself. My personal favorite is the Sailor Moon version. We get a proper roast, with different artists telling their stories their way, from the points of view of the Trinity, Ivy, and Amanda Waller. We get to watch Harley with many different art styles, and costumes. We get stories that range from the utterly hilarious… to the devastatingly heartbreaking. 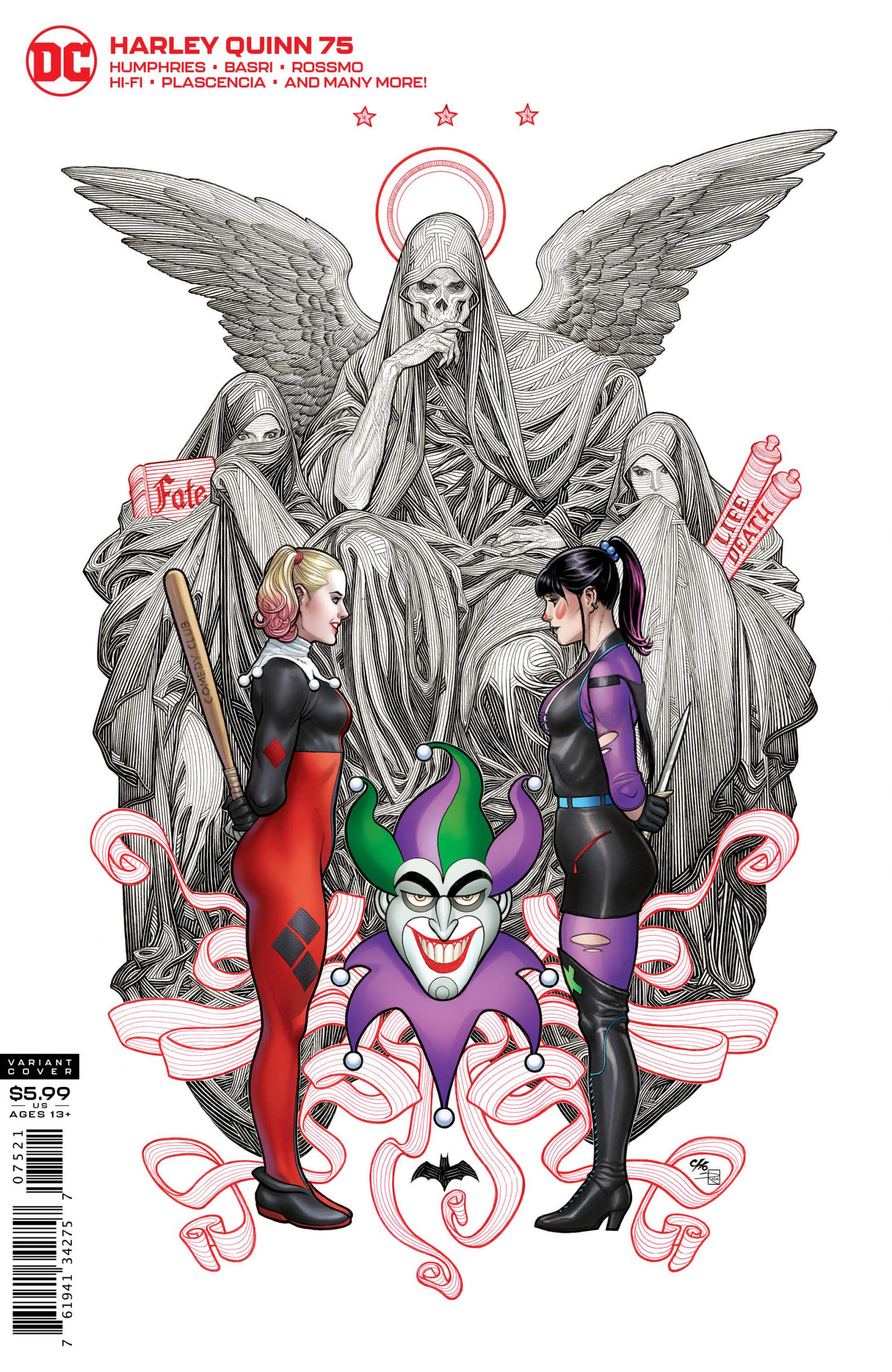 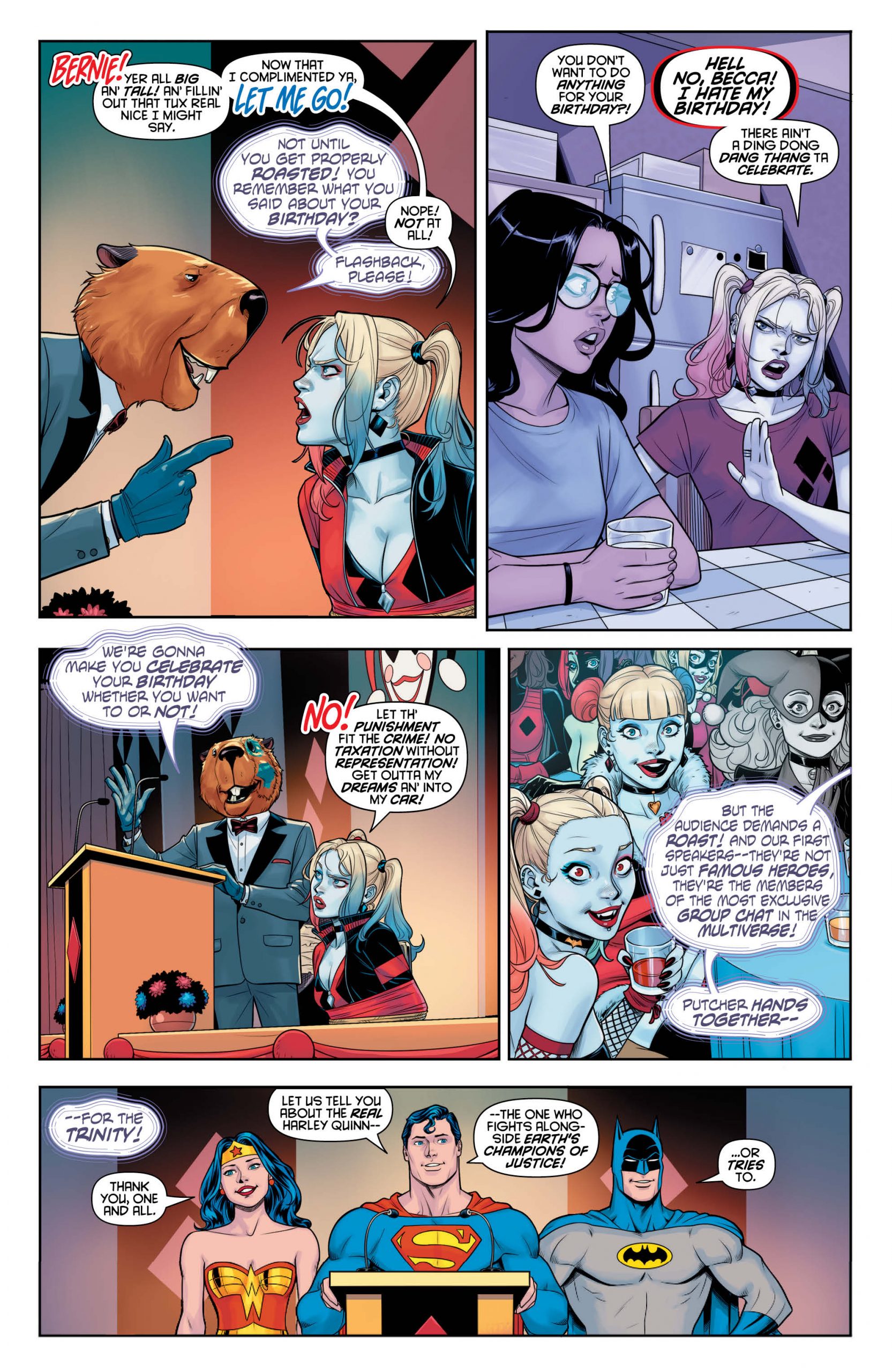 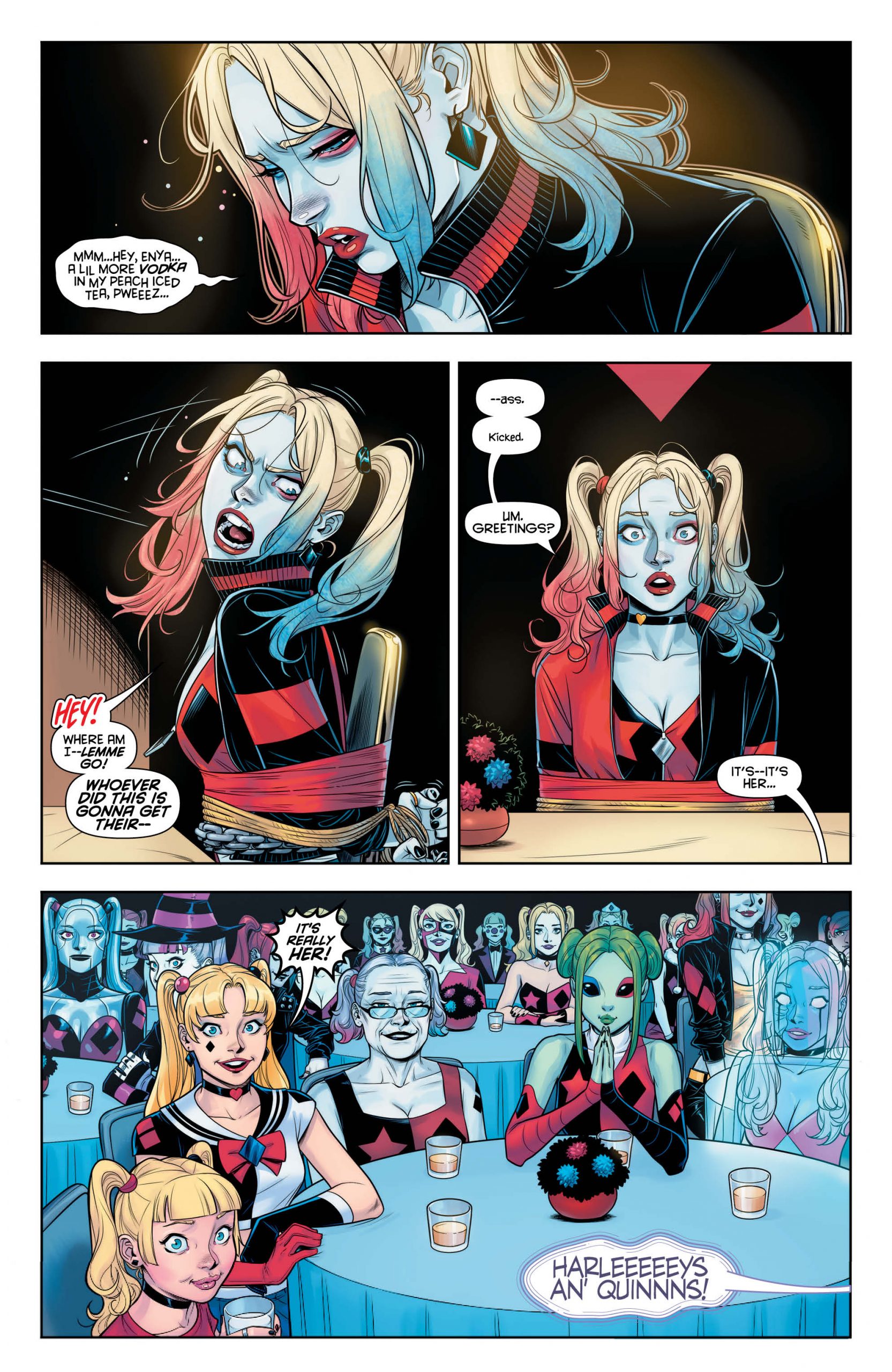 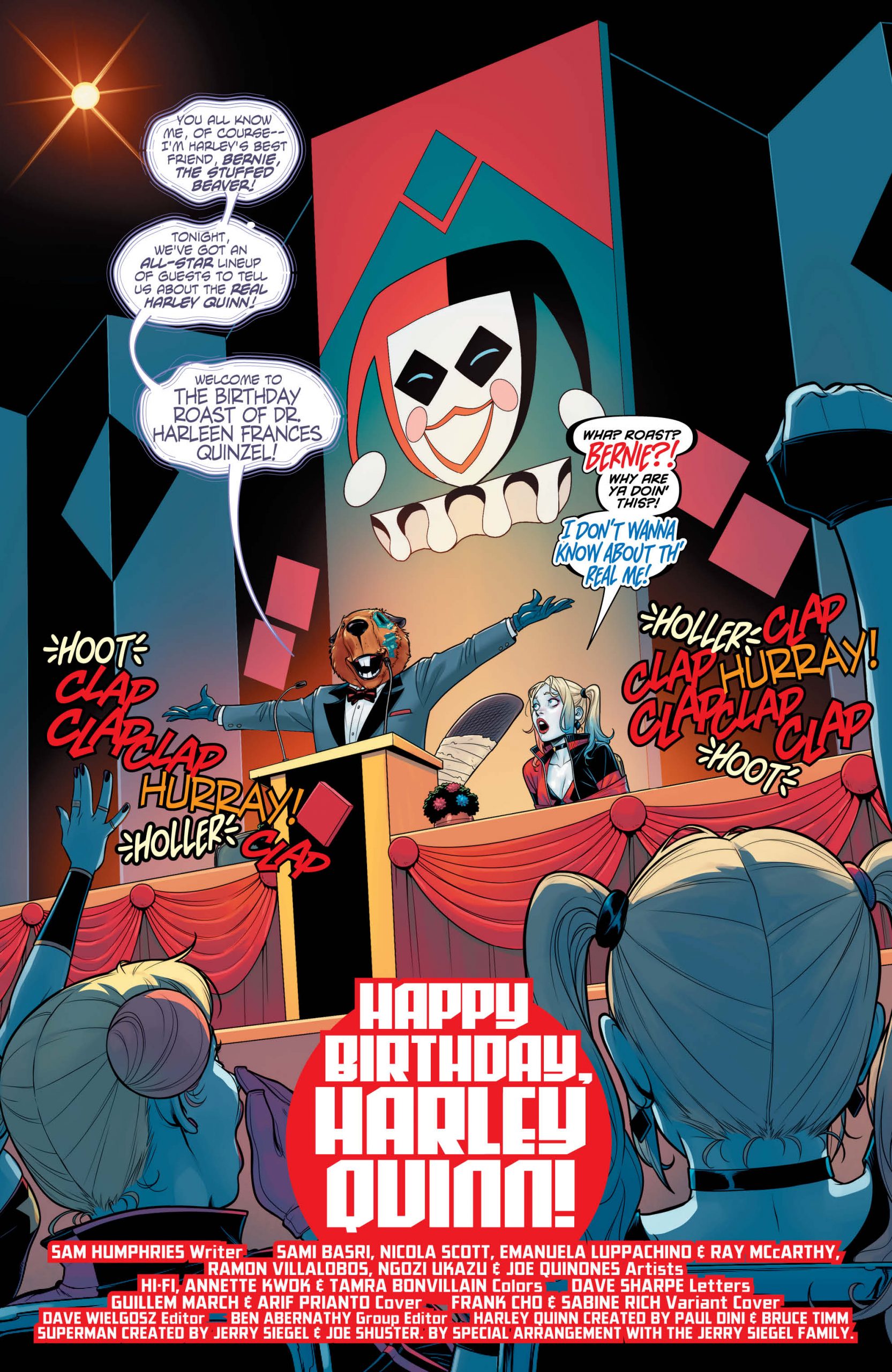 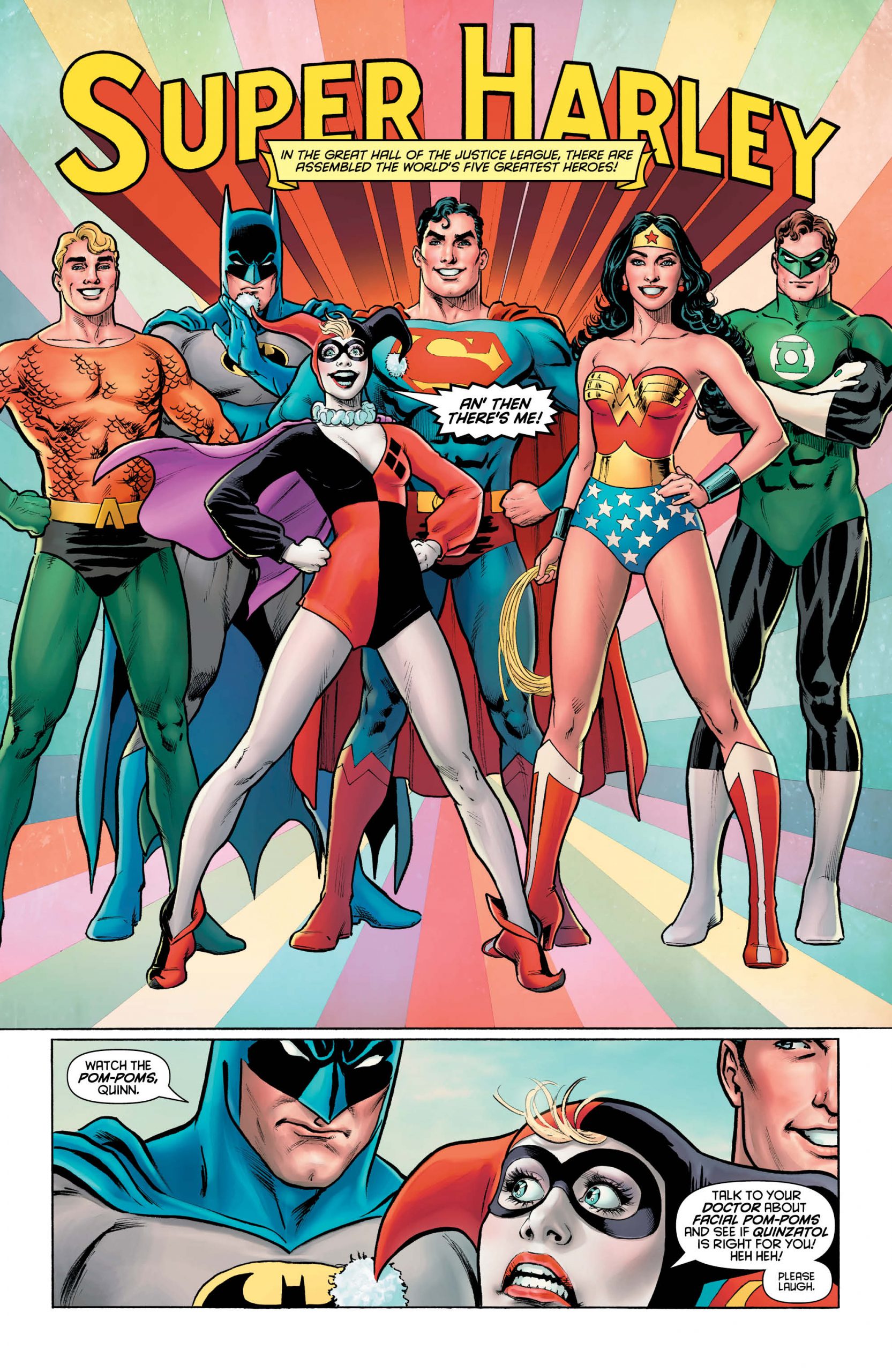 Over the course of this series, we’ve watched Harley struggle to find herself. One of the biggest arcs told of the loss of her mother, and the aftermath of her grief, which is still felt quite powerfully felt in this issue. One of the hardest-hitting stories from the roast is told by Harley’s mom, it’s called “Pinky” and is probably my favorite tale in the issue, although the Harley: TAS style story is fantastically done.

Get Into My Car

While we get slammed with immense talent that has spanned the Harley Quinn timeline, we even get moments of cameos from some of them, the main team shines. Sam Humphries has written us a really special goodbye to this part of the Harley Quinn story.  We get the same level of excellence from Hi-Fi, Sami Basri, and of course David Sharpe. Each member of this team has made sure that their goodbye is not only seen, but felt.

Each issue of Harley Quinn is full of passion, and dedication to the art of storytelling. Sam Humphries and the rest of the team have made sure to give justice to the character, as her journey in finding who she is, and dealing with her grief, and triumphs progressed. There was plenty of humor and a ton of relatable moments, joy, and sorrow, as we watched Harley living her life.

Harley Quinn #75 gave us a fitting ending. It’s a goodbye party for the ages, with cover art to die for. Frank Cho and Sabine Rich outdid themselves on the variant, and Guillem March and Arif Prianto gave a nod to pop culture, as well as beauty.

It’s been both an honor and a privilege to write the reviews for this series, and I thank all who were involved in bringing us such great stories to enjoy, and I wish you all well, and much continued success in whatever project is next.

As we say goodbye with Harley Quinn #75, what are your thoughts? What was your favorite moment? Let us know in the comments below!