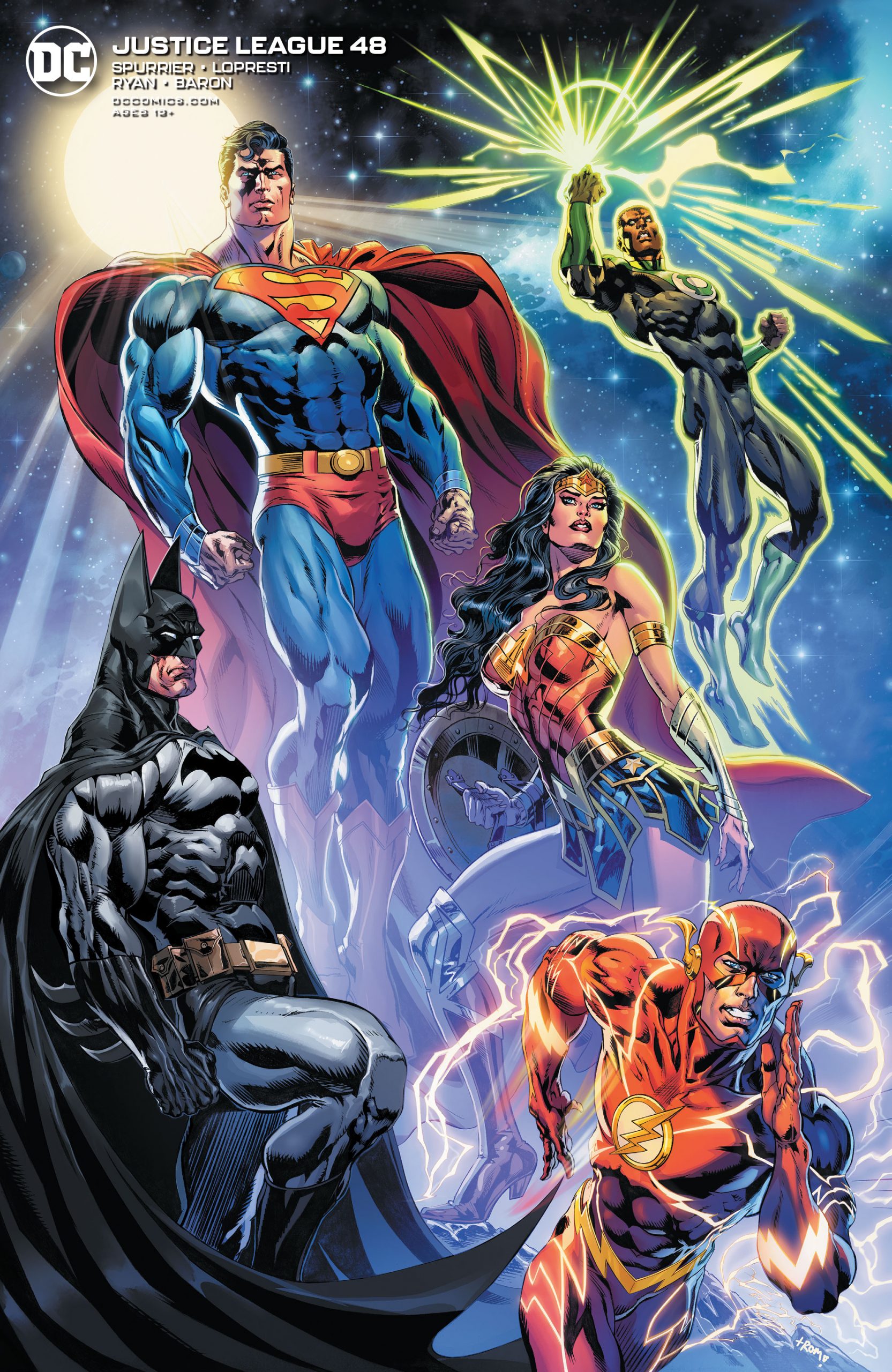 After responding to a distress signal from a nearby space ship, the League stumbles into an uprising in an alien society. Living on a rogue comet, this alien race, the Trotha, is comprised of two rival factions: “The Way of the Cell” and “The Way of the Spark”. An evil despot named Empress Sddinix rules over these warring tribes thereby keeping the peace. When the League arrives, the masses are in revolt, ready to execute their ruler, forcing the League to decide whether or not to intervene in the political affairs of the Trotha.

Si Spurrier takes over writing duties from Robert Venditti in this two-part story, and honestly, I’m kinda glad. After Venditti’s disappointing conclusion to the “Cold War” arc, it’s nice to see a fresh take on the League. Initially, I was not looking forward to another filler arc, but was pleasantly surprised by the quality of this story. 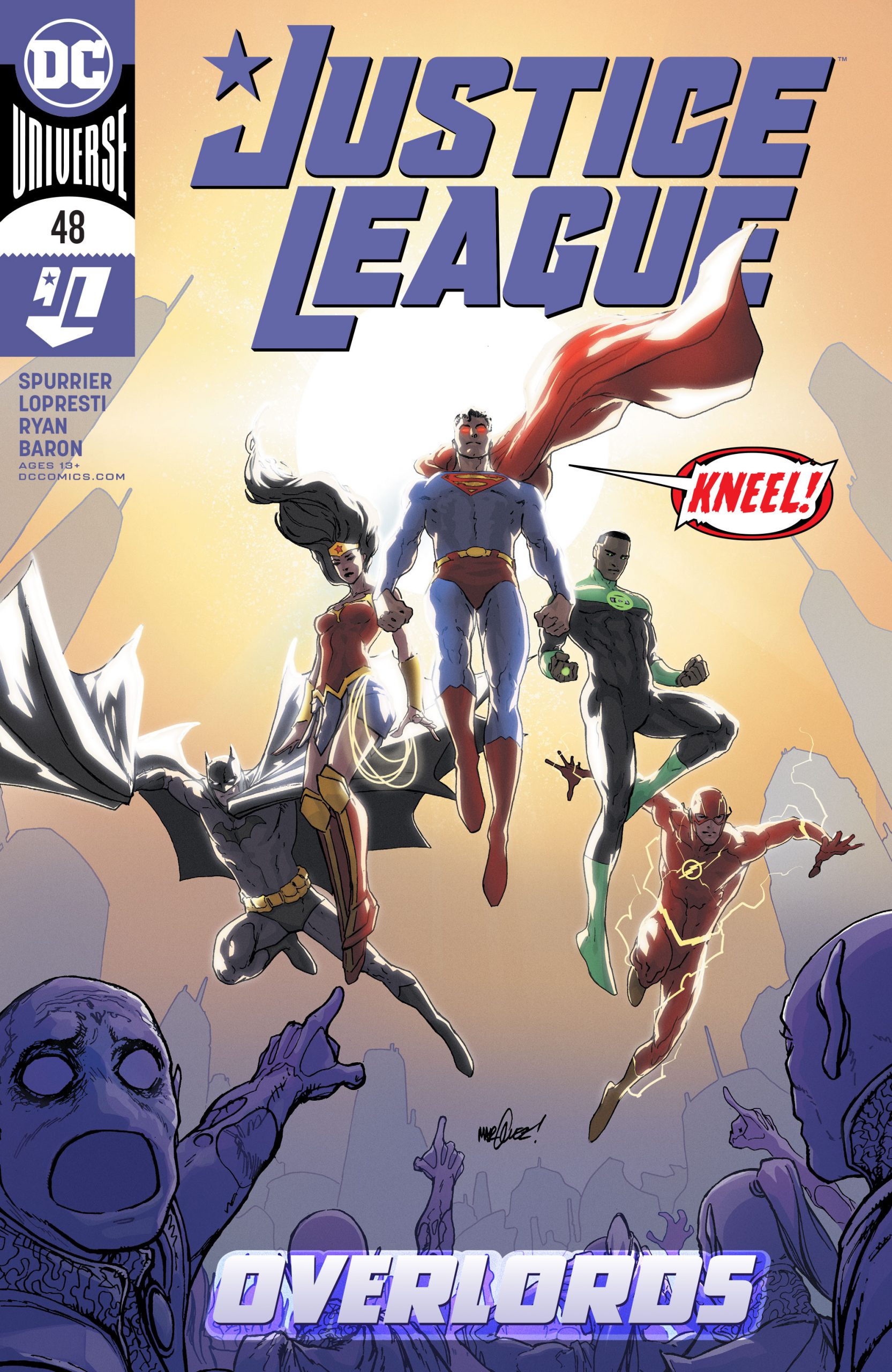 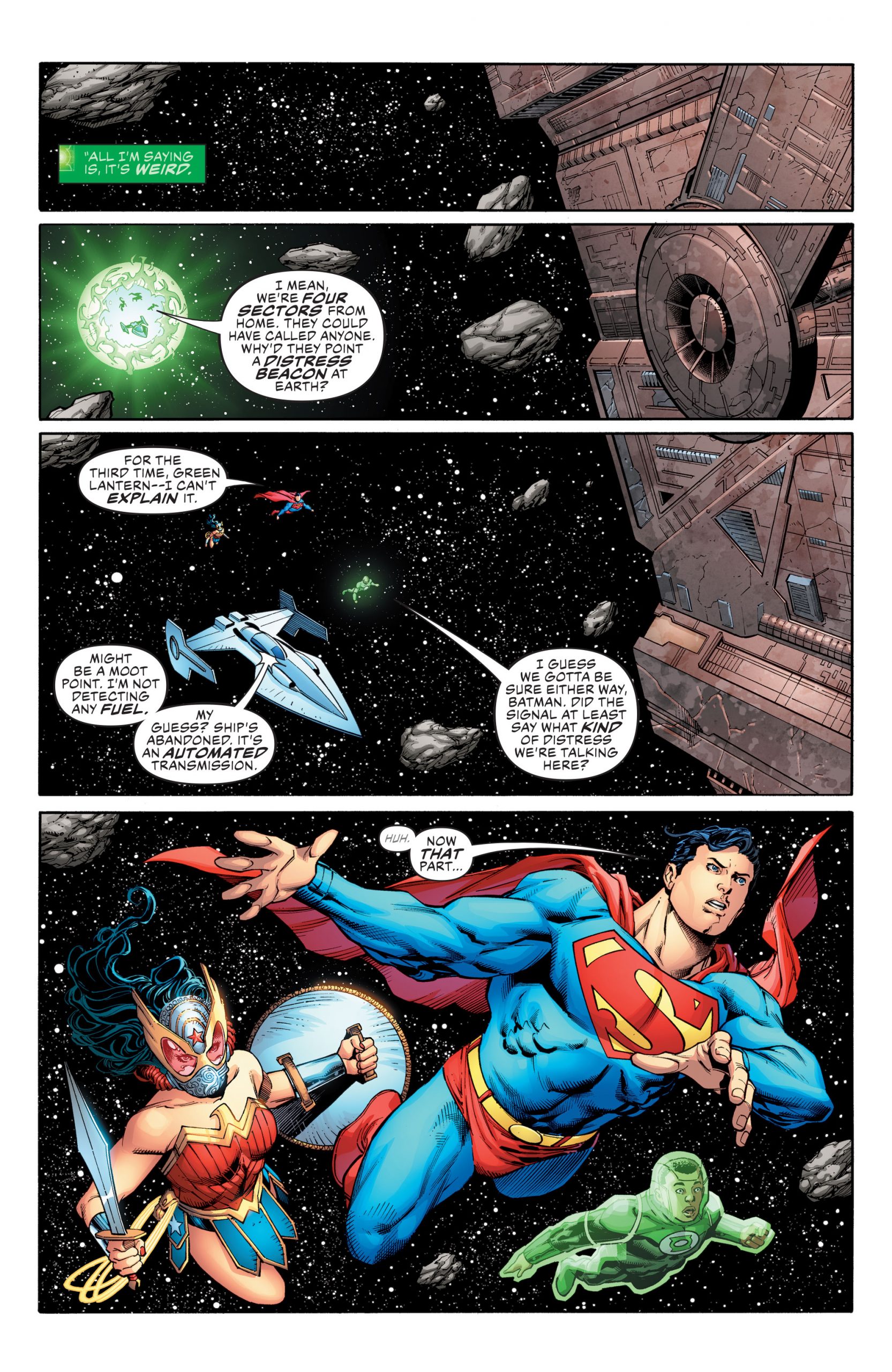 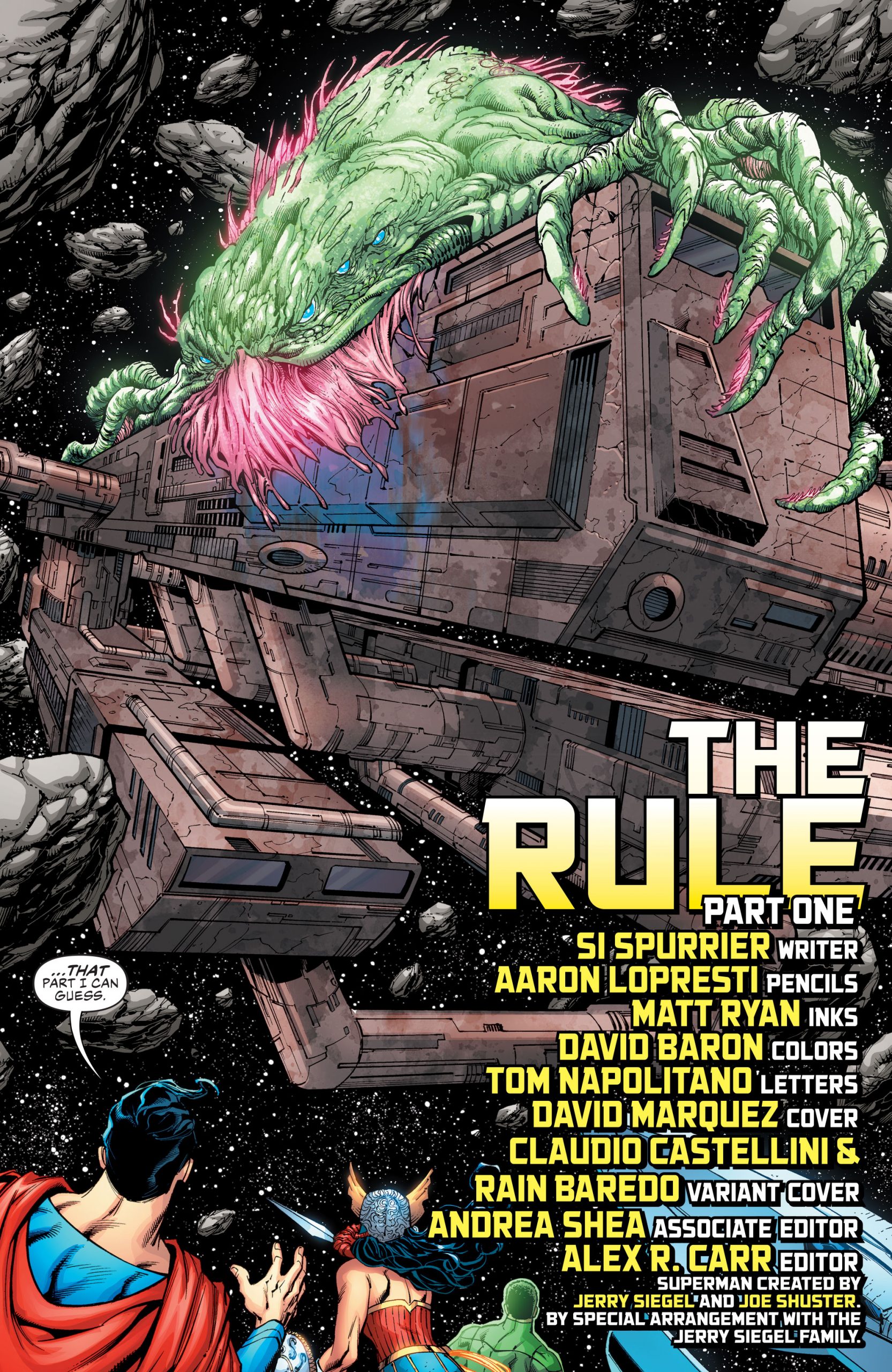 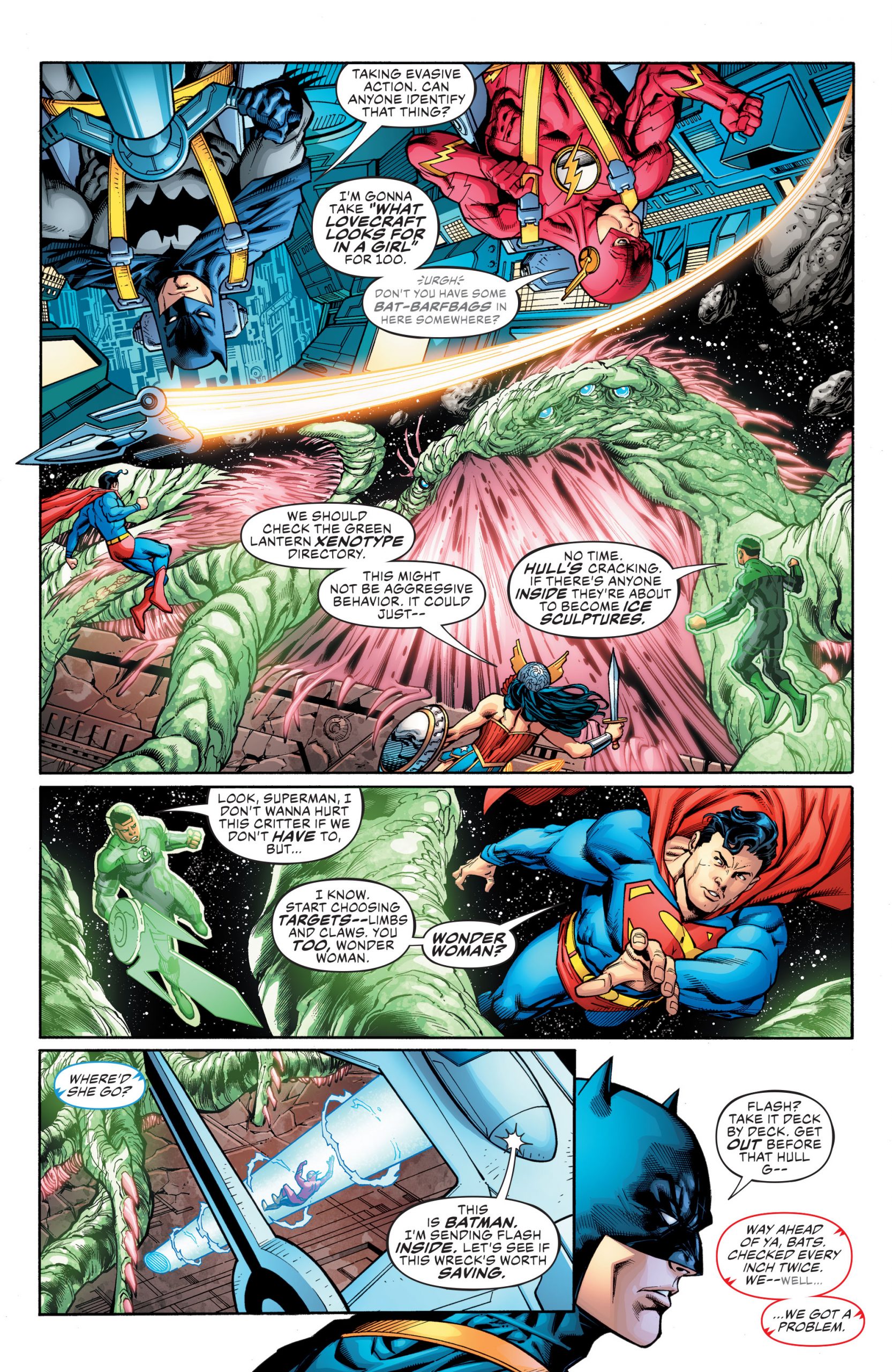 The strength of Spurrier’s script is in its use of character foils, as a means to dialogue about foreign policy. After establishing the premise of the issue (what roles should foreign powers play in another nation’s politics), Spurrier divides the League into interventionists and non-interventionists. As the issue unfolds, the team wrestles with questions around justice and responsibility, while trying to navigate an alien political crisis. Frankly, it’s brilliant.

Aaron Lopresti has pencil credits for Justice League #48, which are somewhat of a letdown following from Eddy Barrows. Lopresti’s work isn’t terrible, but it’s nothing to write home about either. He produces twenty pages of serviceable, yet non-amazing artwork. While the human characters are somewhat flat at times, he does exhibit some imagination when drawing alien characters. There’s a wonderful scene early on in the issue where Lopresti draws a giant Cthulhu-esque lizard munching on a spaceship that’s pretty cool. Unfortunately, he peaks early and the rest of the issue’s quite bland.

Justice League #48 is a mixed bag. Spurrier’s script is fun and fresh, as it’s nice seeing real-world issues wrapped up in superhero sci-fi. In contrast, Lopresti’s art isn’t quite as engaging. While the art won’t likely offend you, it probably won’t have you clamouring for more. It’s a bit of a shame that DC didn’t tap a more high profile artist for this issue, someone like Howard Porter or Scott Kolins would have been a better fit for Spurrier’s alien-heavy script. Alas, Justice League #48 is what it is.

Final Verdict: Read it for the politics – not the pencils.