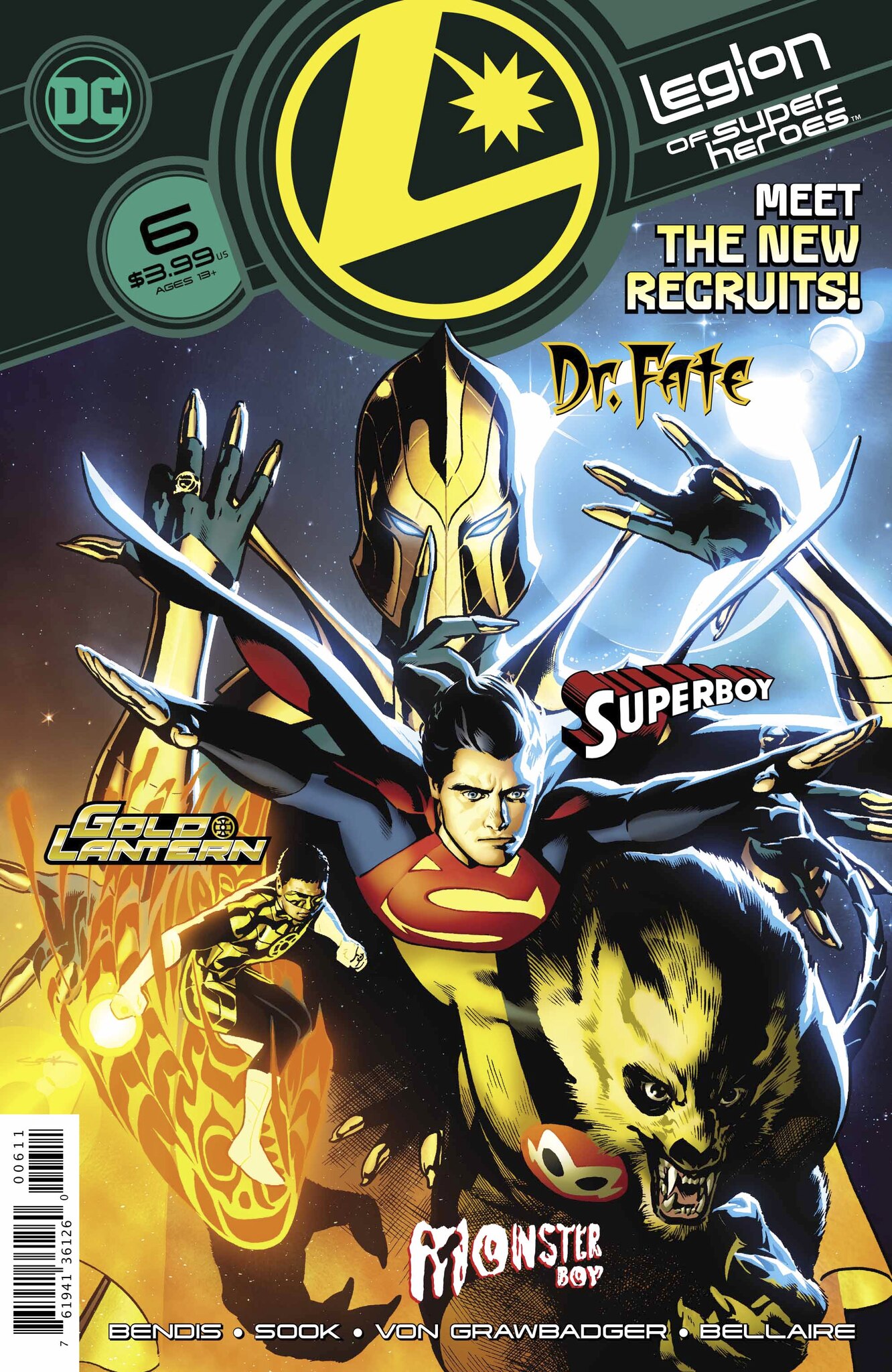 Welcome to the 31st century and Legion of Super-Heroes #6! Meet the latest crop of Legionnaires: Gold Lantern! Monster Boy! The new Doctor Fate! Each one a fresh face in the DC Universe, all of them carrying dark secrets. They all also have a reason to share the Legion’s goal of bringing the values of the Age of Heroes to the 31st century. One of them also has a surprising connection to Jon Kent, a.k.a. Superboy. All of this, and the tensions between the United Planets and the Legion of Super-Heroes have gone public! The future of the DC Universe continues to unfold!

Anyone reporting to the sign-in table at the front of the comic is issued a floating name tag… you’ll need them! In order to keep the roster straight, Bendis cleverly inserts each character’s name into the dialogue, whilst also providing the floating name tag/log/short bio. It turns out that your LinkedIn profile really matters in the 31st Century!

“You Scared the Qrot Out Of Me!”

Bendis… is the roster not deep enough? Geesh! Now we have three more to add with Dr. Fate (who’s on the cover, but conspicuously absent from the pages), Gold Lantern (who looks awesome) and Monster Boy (looking rather ominous as a Wolfman on the cover, but strange as a Mars Attacks character in the opening pages. 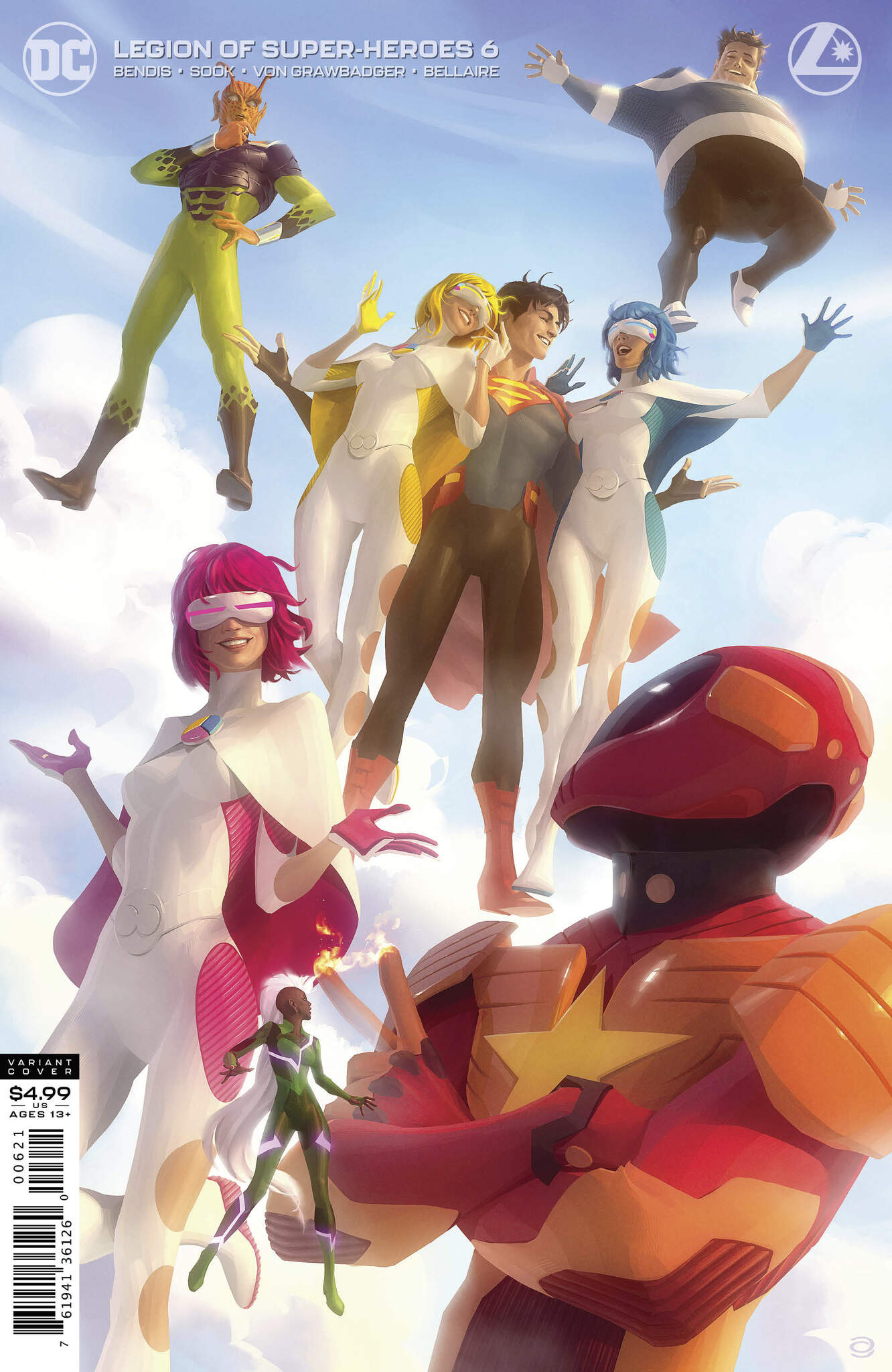 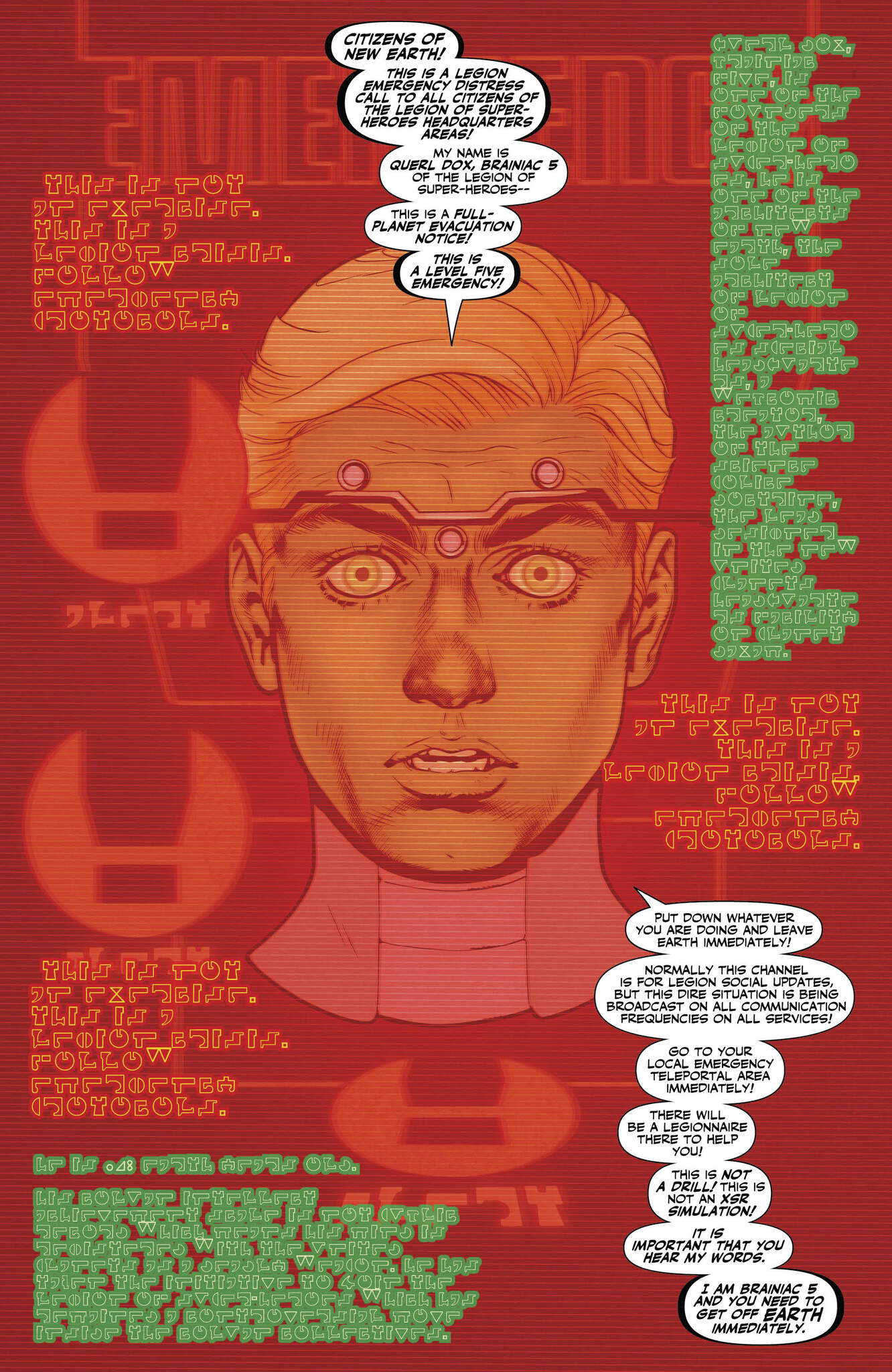 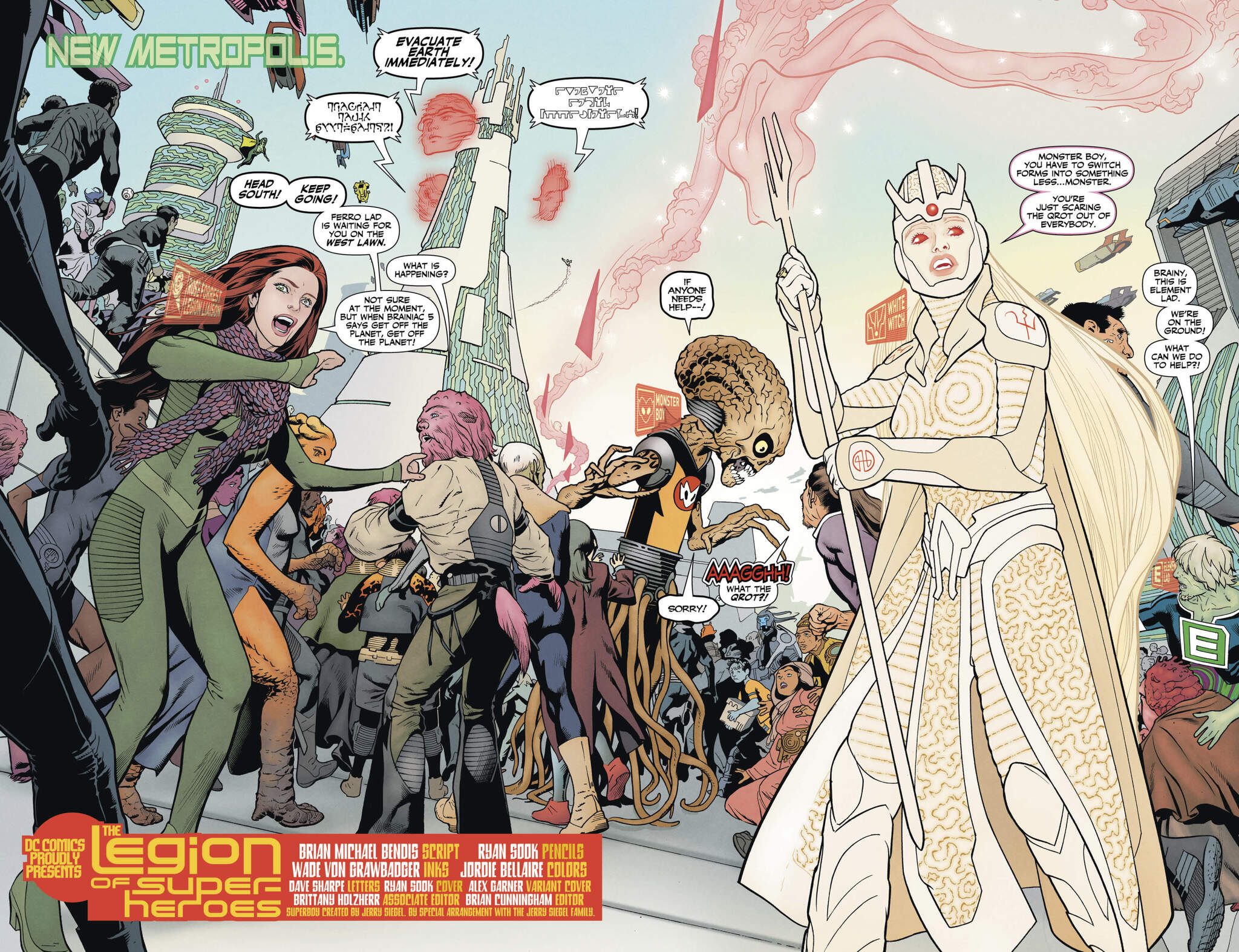 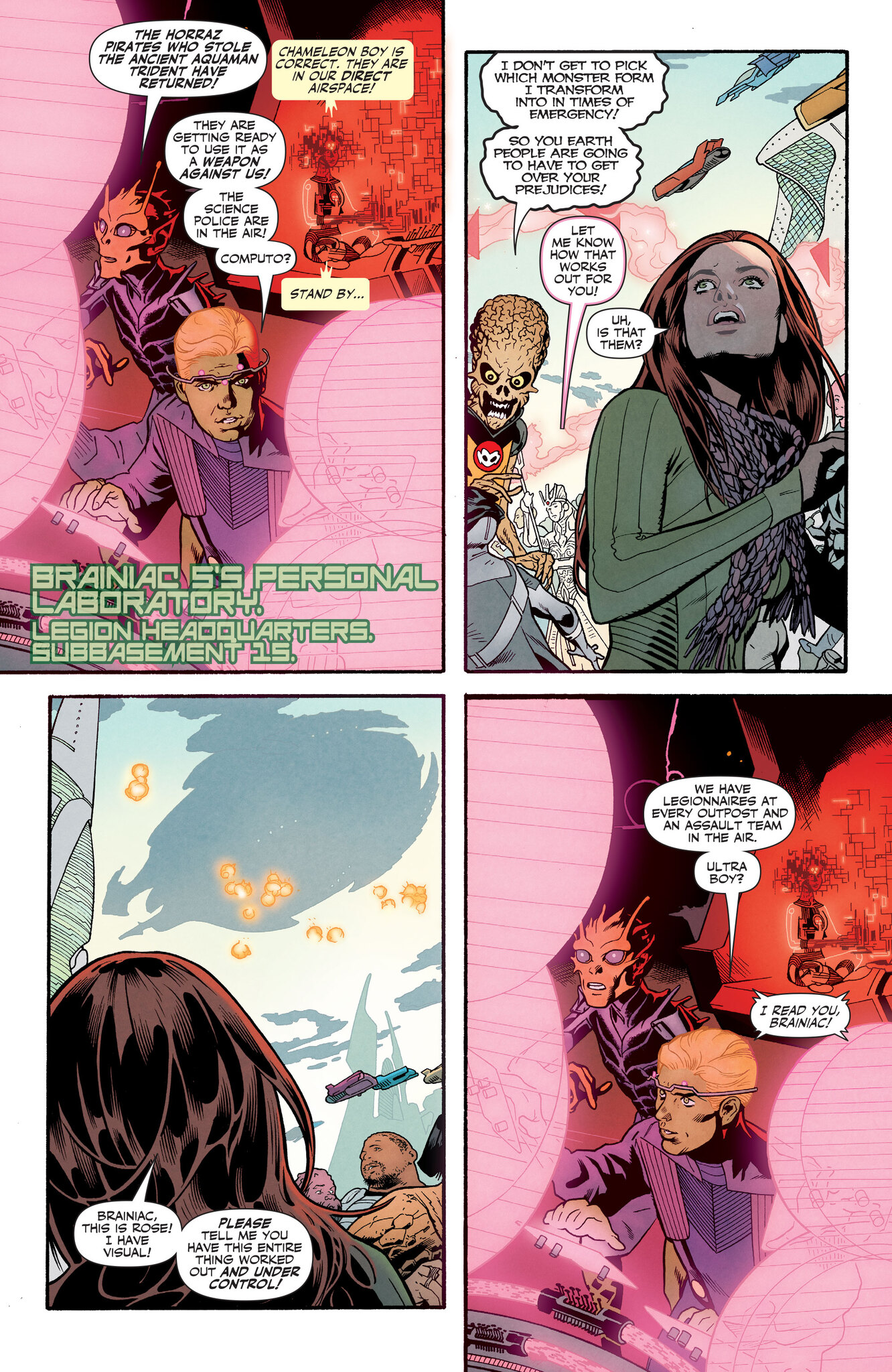 Monster Boy: I don’t get to pick which Monster Form I transfer into in times of emergency.  So you Earth people are going to have to get over your prejudices.

White Witch: Let me know how that works out for you

Even in the 31st century… have we not learned anything yet? It’s a pretty timely and necessary reminder. Perhaps the Legion can continue to work on prejudice in every issue?

So, Superboy’s old enough to join the Legion? Dr. Fate is prominent on the cover, but is nowhere to be found in the issue? While a battle ensues, earth-changing events occur in an unrealistically precipitated manner. Too fast, too simple, and too many corners are cut in the story for my tastes.

Brainiac issues a lot of warnings during the battle, but the human element seems to be the biggest surprise of all. I guess statistics are like a swimsuit. They may show a lot, but not everything. Every time he runs the numbers it makes him look a little more “human.” Maybe that’s a good thing.

The roster grows… well at least it appears to, so how do we continue to keep up? The readers and long time fans need more solid roots for a bit, to kelp us get to know everyone introduced thus far. Newcomers have to get some traction with these heroes, and older fans need to move towards either accepting this new Legion incarnation. or dismissing it, as it’s not their Legion of old. Either way, let’s take a breath Mr. Bendis, give us some character development, and let us enjoy this Legion.  Put a bouncer at the door… the dance floor’s overcrowded.