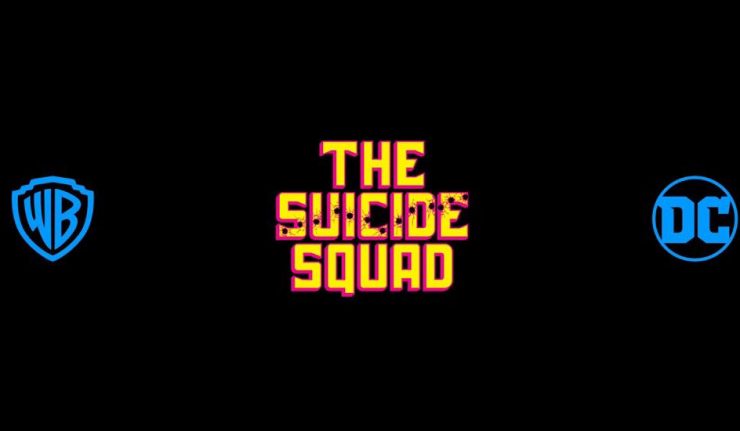 Since James Gunn began principal photography on The Suicide Squad in September, WB and DC seemed to have successfully redirected the attention from the Gunn-rebooted Task Force X to the now hotly anticipated Birds of Prey (And the Fantabulous Emancipation of One Harley Quinn). Over the past few months, the flick has been quietly filming in Georgia and it seems like it’s “creeping up to the finish line.”

On an Instagram story, James Gunn went through and answered a ton of fan questions regarding life in general, mental illness, work in film, and several regarding TSS. One particular question that drew my eye came from a fan asking how far along is filming on TSS. Gunn replied, “Creeping up the finish line. (About a month left).

See below for a screen grab: 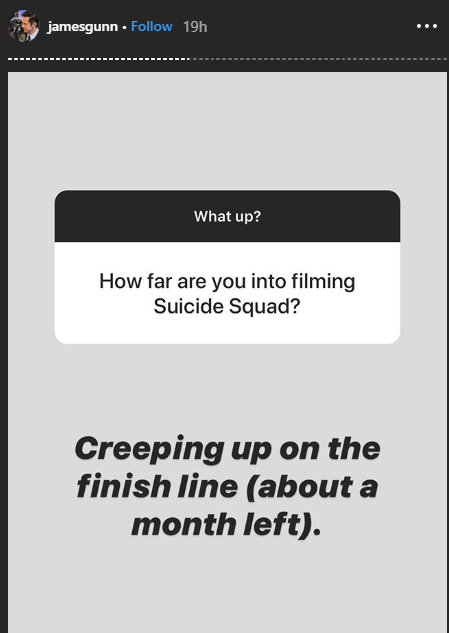 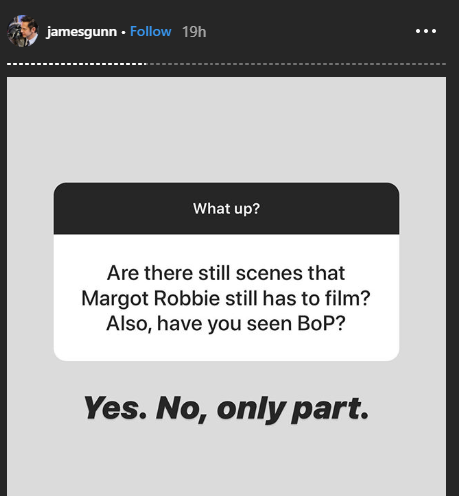 So now we know that Robbie is definitely part of the reason why TSS has not finished filming. She’s a busy woman who’s currently working on another DC film also as Harley Quinn, so all is forgiven. In case you somehow didn’t know, Robbie is currently out doing press for BoP and will appear at the premiere as well. Also, we can gather that there likely isn’t too much inter-connectivity between the two films, other than Harley Quinn, if Gunn hasn’t seen BoP.

And lastly, one last interesting tidbit I took from the Q&A is regarding DC’s involvement with Gunn’s vision of The Suicide Squad. Part of the reason why Justice League did so abysmally was what was rumored to be immense studio interference. Thankfully, that does NOT seem to be the case with Gunn. 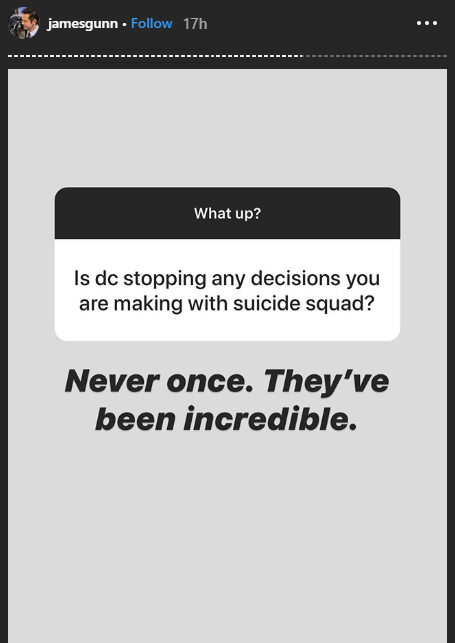 Based on this answer, it seems that WB and DC understand that Gunn knows exactly what he’s doing. I mean, it’s hard to doubt him given the success of Guardians of the Galaxy. My hopes have always been high, but now they’re just a bit higher knowing that Gunn has been working unhindered.

Looks like The Suicide Squad is almost to the finish line. After principal photography, it’s post production which includes editing, special effects, score, etc. I anticipate once filming finishes, we’ll finally get a trailer about 3-5 months after filming. I’m going to estimate a trailer drop probably in the summer of 2020.

The Suicide Squad hits theatres on August 6, 2021. Stay tuned to DKN for updates.