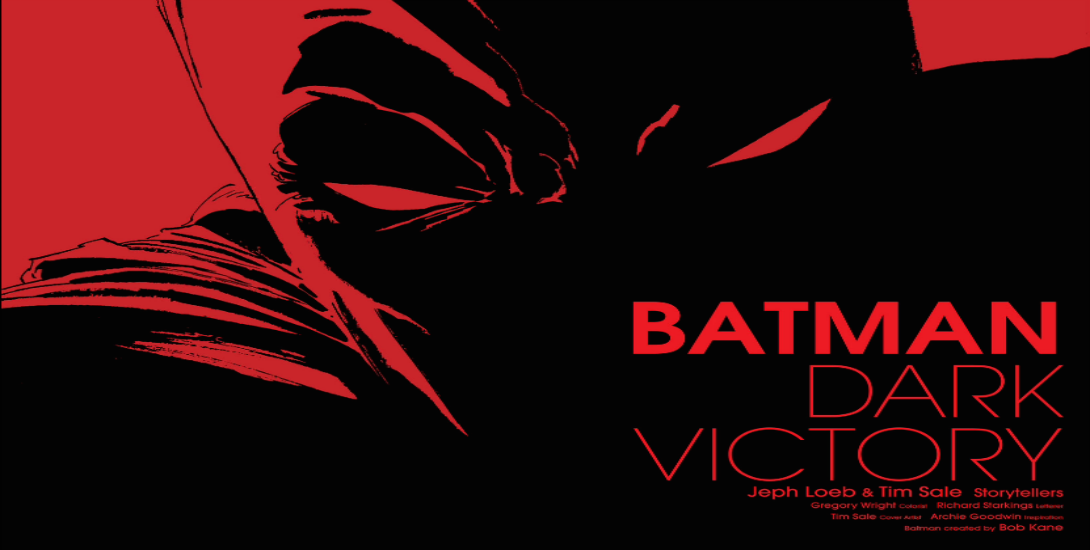 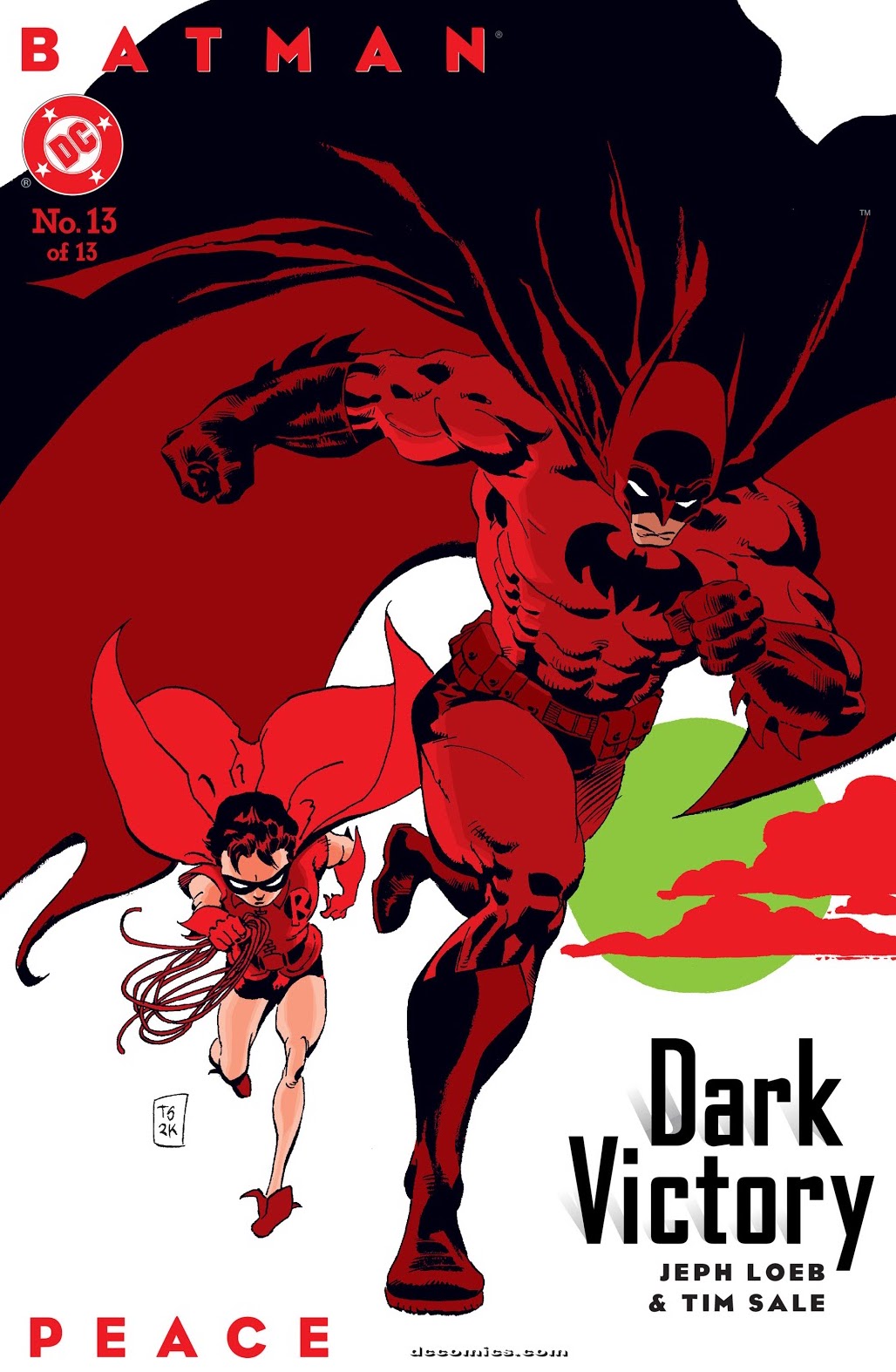 Dark Victory: Peace is a momentous and emotionally-satisfying conclusion to Jeph Loeb and Tim Sale’s epic. Picking up from the previous chapter, Batman is being hanged with Catwoman waiting above him. Fortunately, Batman quickly escapes and disarms Selina, but the question remains, where did she disappear to for six months?

Catwoman revealed she has been in Italy for those past months searching for Sofia Gigante’s whereabouts. After being mutilated by Catwoman and broken glass at the end of The Long Halloween, Gigante found a plastic surgeon to fix her face. Despite this, Sofia vowed vengeance against Two-Face for murdering her father. In a declaration, she cuts the left side of her face to resemble the former D.A..

The act of cutting her face is an interesting notion. Her father had scratch marks on the right side of his face. Similarly, Two-Face’s scars are on the left side, implying that the two are mirror opposites. Sofia cutting her left side signals that she identifies more with Two-Face, despite hating him. This may be more about her methods and less philosophical. Sofia has transformed herself into another super-villain, not just a regular mobster. She also embodies all the standard tropes of a super-villain. She has a secret identity as the Hangman, a gimmick crime, and even a mask. Loeb uses Sofia’s character transformation as a parallel metaphor to show how new crime has overtaken old, traditional crimes.

This conflict becomes literal as Two-Face and the gang systematically murder the remaining heads of the mob families. Being a mobster has no use in Gotham City. Being a super-villain is the new way of committing crimes and it is now permanent.

Side-note, but the coloring on the Columbus Day massacre page is wonderful. Look how it distinguishes different scenes base on the bold colors alone. I don’t know if this was Tim Sale’s idea or color artist Gregory Wright’s, but it is such a cool visual trick.

The Falcones on the Run

With the majority of the mob family leaders killed, the Falcone siblings are scattered and on the run from Two-Face. What was once an untouchable crime family is now a fleeing for survival. This is another example of a reversal in power.

Mario Falcone turns to Batman and Commissioner Gordon for protection. And now, Sofia and Alberto Falcone are hiding out in their family mausoleum. Sofia grouses to Alberto how he is weak compared to their father. Alberto replies that he is not like his father.

I am not my father. I just want to live–

That statement can be interpreted as both a sign of protest towards his sister and his level of acceptance. Since the beginning of TLH, Alberto has always sought his father’s approval by committing crimes like him. However, when Carmine rebuffed Alberto, he became the Holiday in an effort to prove his family worth. But the mystery of the Holiday’s identity inflated his reputation. Ironically, Alberto as Holiday became more notorious than the Falcone crime family. Now that Alberto is near death, he accepts how he is no longer his father. He accepts change. Thanks to his time as Holiday, Alberto is more than his father. He has also risen to super-villainy.

Unable to cope with that fact, Sofia suffocates her brother. What’s more telling is her immediate reaction after she kills him. Her face almost looks fearful, as if she’s being judged by all of her dead relatives. The irony is that she always rejected super-villains or “freaks”, even murdering her brother to prove it. Yet, she is now a super-villain herself as the Hangman. For Sofia, she is unable to accept change.

At Gordon’s office, Mario reveals that Wilcox – one of Gordon’s murdered officers – is a mole for the Falcones. Her recorded words give the last clue Batman needs to connect Sofia as the Hangman.

Unfortunately, it’s too little, too late. The gas mains explode all around Gotham City. Sofia has orchestrated the explosions to raze Gotham and kill the “freaks”. Her ploy would have worked too, if it weren’t for Batman’s timely intervention.

None of you are safe

Two can play this game

Knows if you’ve been bad or good

And justice for all

A jury of your peers

Murder in the first degree

Order in the court

An eye for an eye

Sofia hates the super-villains for taking over the city, but hates Two-Face more for killing her father. She isn’t satisfied with just killing Two-Face, she needs to see his legacy wiped away. Every cop she murdered has helped Harvey Dent’s career. Now she wants to take it all away.

Ironically, when distracted by Batman, Two-Face murders her. Sofia was one of the last remaining mobsters in the Falcone crime family. Her death signals a definitive end to the old ways of crime in Gotham.

“The Sensational Character Find of 1940…”

The remaining villains meet up with Two-Face and accidentally stumble upon the entrance to the Bat Cave. Fortunately, before Two-Face and the crew can explore too far, Dick Grayson bursts onto the scene as Robin. The exchange between Joker, Two-Face, and Robin sets the scene up perfectly.

Joker: What the hell is this?!

Two Face: Some kid all by himself.

Robin’s statement is in stark contrast to Bruce Wayne’s opening line from issue one: “I am alone”. Robin is in a very different attitude about loneliness, because of Batman. He is optimistic and ready to rely on his new crime-fighting partner.

The Complexity of Acceptance

Batman is also now at peace with Harvey Dent being truly gone. He no longer hopes for Two-Face to be redeemed. The twist is, however, that Batman acknowledges Harvey was a friend at one point too. Acceptance is complicated. It’s okay to accept that bad things happen, but that doesn’t negate all the good. Batman now accepts that Two-Face is here to stay, but that doesn’t negate all the good he did as Harvey Dent. In some ways, this difficult acceptance allows Batman to emotionally move on. He can appreciate the harsh reality of something, but not let it overwhelm him with cynicism.

That’s what sets Batman apart from the Falcones, as their refusal to change not only ended them, but twisted them into conflict and dispute. They could never accept change and, in the end, it caused them to self-destruct.

Unfortunately, for Two-Face, Joker betrays and shoots him. But before Joker can react, Robin takes him down.

Now that the crime wave is finally over, Gordon tells Lopez that he’s thinking of promoting her. He says how the old ways are probably done and it’s time to build a new legacy.

Chief O’Hara would talk about the “old” days in Gotham City. How being a cop was tough, but that they held onto it. That being a cop meant something back then. I think it can be again, Lopez.

Gordon accepts the changes to the city. But, he believes that some traditions still have value. But he is not embracing new ideas as much as he is adapting the traditions to the times. That is why he accepts Batman operating in the city, while still running the police force.

Next, we see various epilogues for the rest of the characters in Dark Victory. Mario Falcone is shown as broken, despondent, and having lit the Falcone mansion on fire. As Batman’s narration notes, the Falcone empire ended with a broken man. Mario is perhaps one of the more tragic figures in Dark Victory.  He recognized that Gotham was changing and did his best to adapt to it, but that wasn’t enough and he suffered the consequences of his siblings’ actions.

At the Roman’s gravesite, Selina Kyle proclaims that she is his daughter. Or at least that she believes she is. Loeb wisely left her proclamation vague.

In an undisclosed location, we see Two-Face alive and the frozen body of The Roman.

The final scene in Dark Victory: Peace shows Batman and Dick Grayson in the Bat-Cave. Batman pontificates that he now sees how he can help guide Dick’s rage productively. We then see a re-creation of the iconic swearing the oath by candlelight scene, an obvious callback to the original Detective Comics #38.

Batman’s narration ends the story on an up-note.

I made a promise to my parents that I would rid the city of the evil that took their lives. That remains unchanged. Only now… I am no longer alone.

The last lines in Dark Victory: Peace are a callback to Dark Victory #1’s opening, and also TLH‘s end. In a way, it acts as a bookend for both stories.

Dark Victory: Peace was satisfying on so many levels. It ends all the plot-lines in a satisfactory manner and all of the story’s themes of loneliness, acceptance to change, and old crime versus new crime also receive an emotional climax.

This is probably a controversial statement, but I think that Dark Victory is actually a better storyline than TLH. Thematically, it wraps up the motifs and themes in a logical way, and it has tighter pacing and less stupid, illogical plot points (Sorry, Gilda Dent). Loeb and Sale had a gargantuan task of crafting not one, but two great mysteries that explain how Gotham became the way it is.

In my opinion, the best reading experience involves Year One, TLH, and then Dark Victory. The storylines compliment each other so well and seamlessly blend into one another. Even as a stand-alone, Dark Victory is a one of Loeb and Sale’s best stories ever.