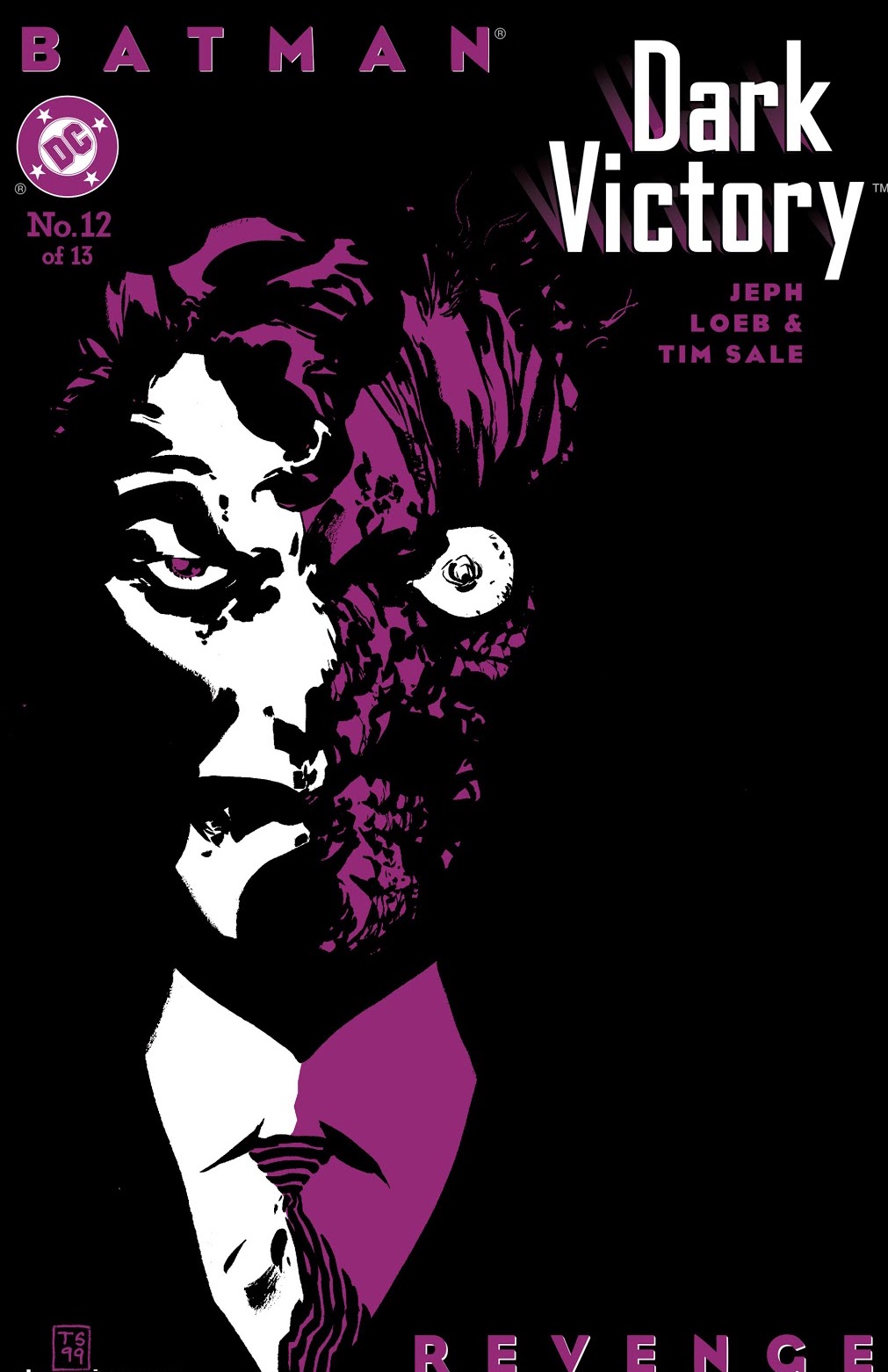 Dark Victory: Revenge is the penultimate chapter of Jeph Loeb and Tim Sale’s Batman masterpiece. It ties up many loose ends, while setting up the grand finale.

In truthfulness, much of Revenge is weirdly rushed. We find that DA Janice Porter was kidnapped off-screen. The Scarecrow and Joker confront her and take her to Two-Face. Weirdly, the captions explain how the Joker is back on the streets after being arrested in a previous chapter.

The whole beginning feels odd of Revenge, because Loeb relies on so many events to occur off-screen. What is even stranger is that he could have easily had Porter captured by the villains in the last issue when they broke into the courthouse. But, instead we get no real explanation for her predicament. It felt like Loeb was running out of storytelling space and just had things “happen”. This is a particularly jarring feelings, since Loeb spent the last 11 issues meticulously plotting and laying the groundwork. 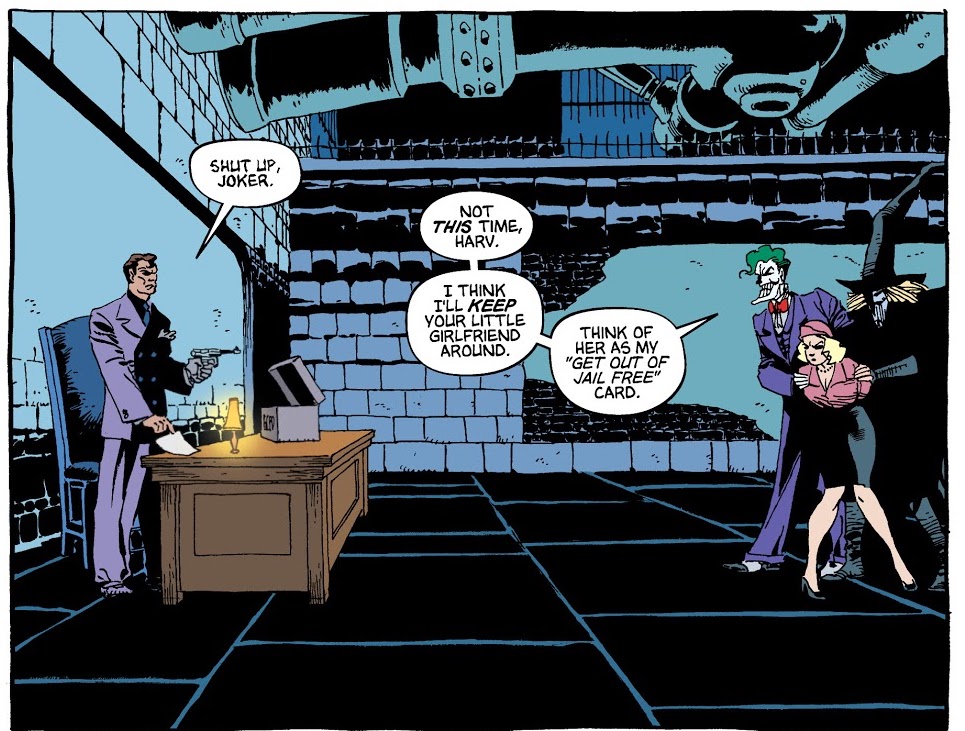 Joker wants to keep Porter as a hostage.

Anyways, the Joker brags to Two-Face that Porter will be his hostage. Porter also pleads how she is in love with Two-Face. Instead of letting Joker have the upper hand, Two-Face just shoots her, declaring: “Harvey Dent is a married man, Porter. Don’t ever forget that.” 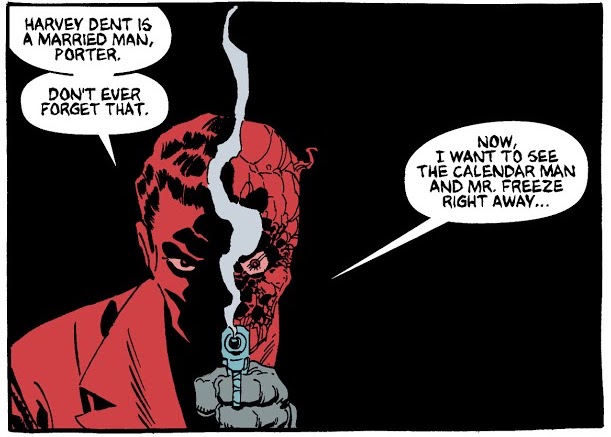 The statement solidifies that Harvey Dent is gone. Porter was his last connection as Dent and Two-Face killed her with no hesitation. Two-Face even talks in third person, as if Dent is a totally separate individual.

At the Gotham Police headquarters, Lopez and Commissioner Gordon pour over the audio tape Wilcox recorded when she was murdered by the Hangman. Wilcox’s last words indicated that she may have known the killer personally. Batman enters and infers that Porter and Dent may have had an affair at one point. Even more pressing, Porter is actually a secret mole feeding Two-Face information. 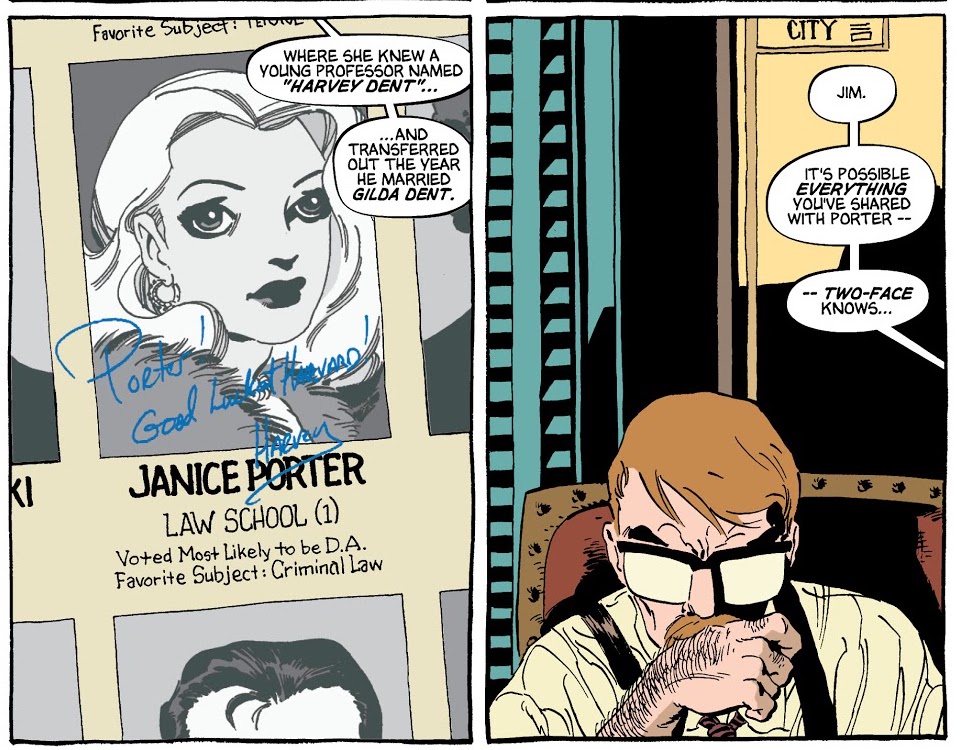 Gordon and Batman discover that Porter has been a mole the whole time.

Of course, all of this information is too late, since Porter is already. A fact that Alberto Falcone finds out as he discovers Porter’s dead body in his bed. What is worse, the disembodied voice prompts Alberto to kill himself with the same .22 pistol he used as Holiday. 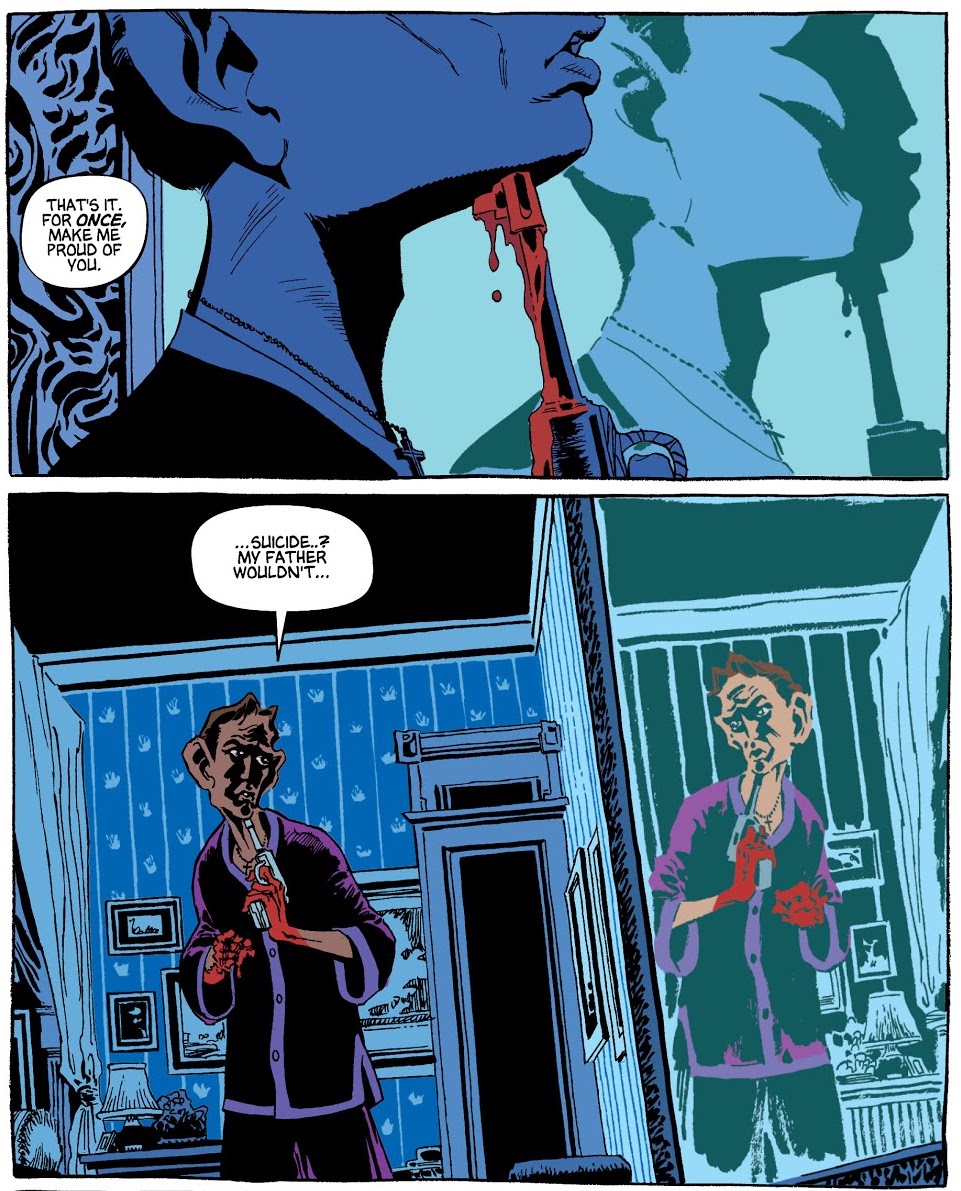 Alberto realizes that the voice is not his deceased father.

However, the suggestion of suicide shook Alberto out of his haze as he discovers the voice is not his dead father, but actually is the Calendar Man. Here, Loeb utilizes the theme of power reversals. The entire series and The Long Halloween shows the Calendar Man being just an annoying nuisance. But now, he is the mastermind of an entire conspiracy against Alberto. 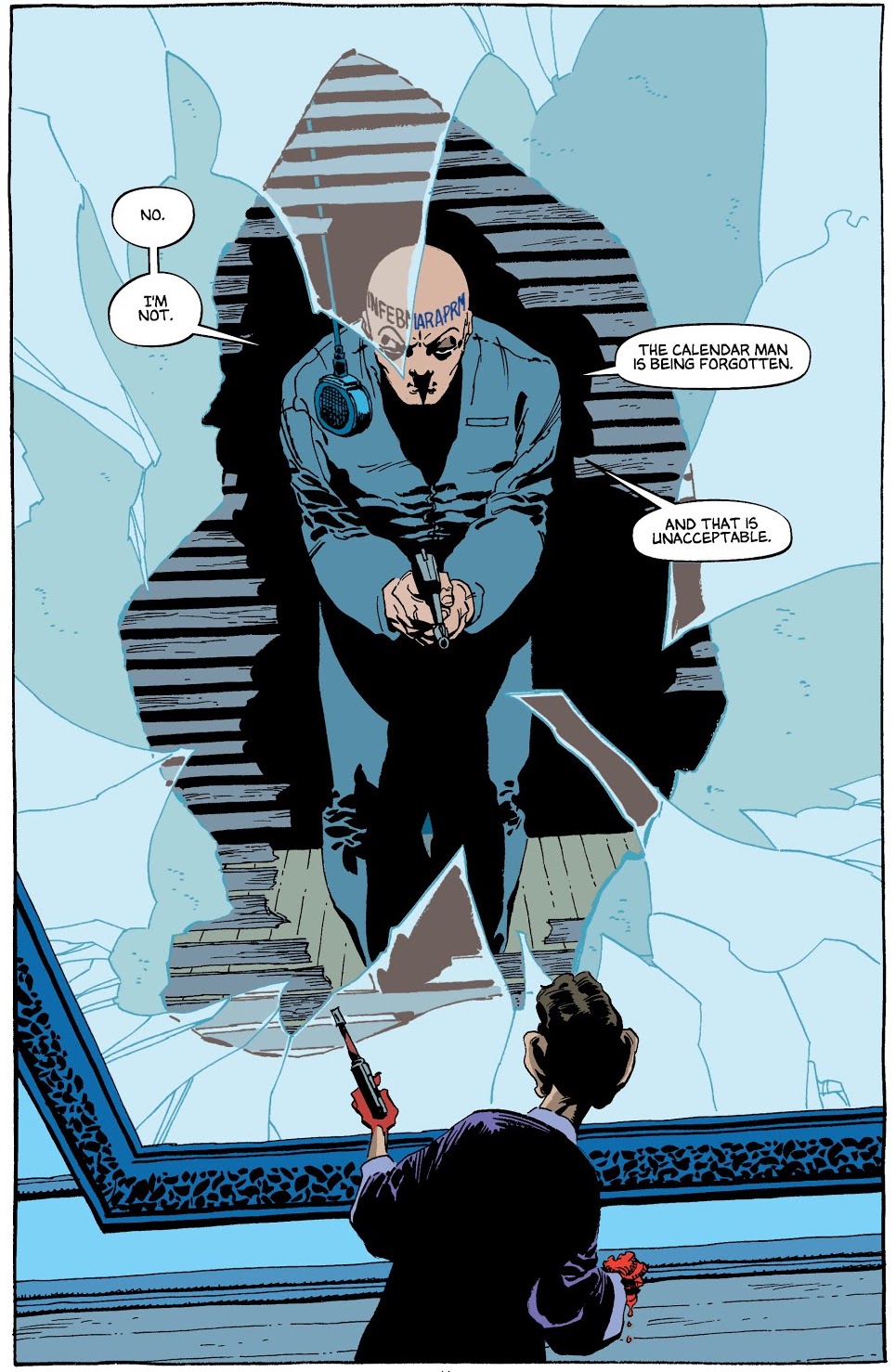 Calendar Man is revealed to be behind Alberto’s problems.

“The Calendar Man is being forgotten. And that is unacceptable.”

Calendar Man’s sole motivation to kill Alberto is due to pride and fame. Unlike the mob, super-villains, like Calendar Man do not care just about money. The belief that fame is more important that money is one that Alberto shared TLH, and now it is ironically being used against him.

Dick Grayson in the Circle of Trust

However, we get yet another time-jump where the action happens off-screen. The Calendar Man is now beaten up and Alberto apparently escaped him. Batman comes back to the Bat Cave to examine the clues of the Hangman murders with Dick Grayson. This scene feels like another example of how Bruce treats Dick more of an equal. Despite, Dick still acting like a kid and comparing the murder evidence to tic-tac-toe, Bruce is allowing him to examine the files with him. Because they both share similar traumas, Bruce and Dick are almost emotional equals. This allows Dick a certain level of trust that Bruce does not share with others.

And it pays off too. Dick acts as an objective observer and points out how the first Hangman message, “N_ne _f y__ _re s_fe.” is actually “Nine of you are safe.” And with that revelation, Batman solves who is the Hangman. 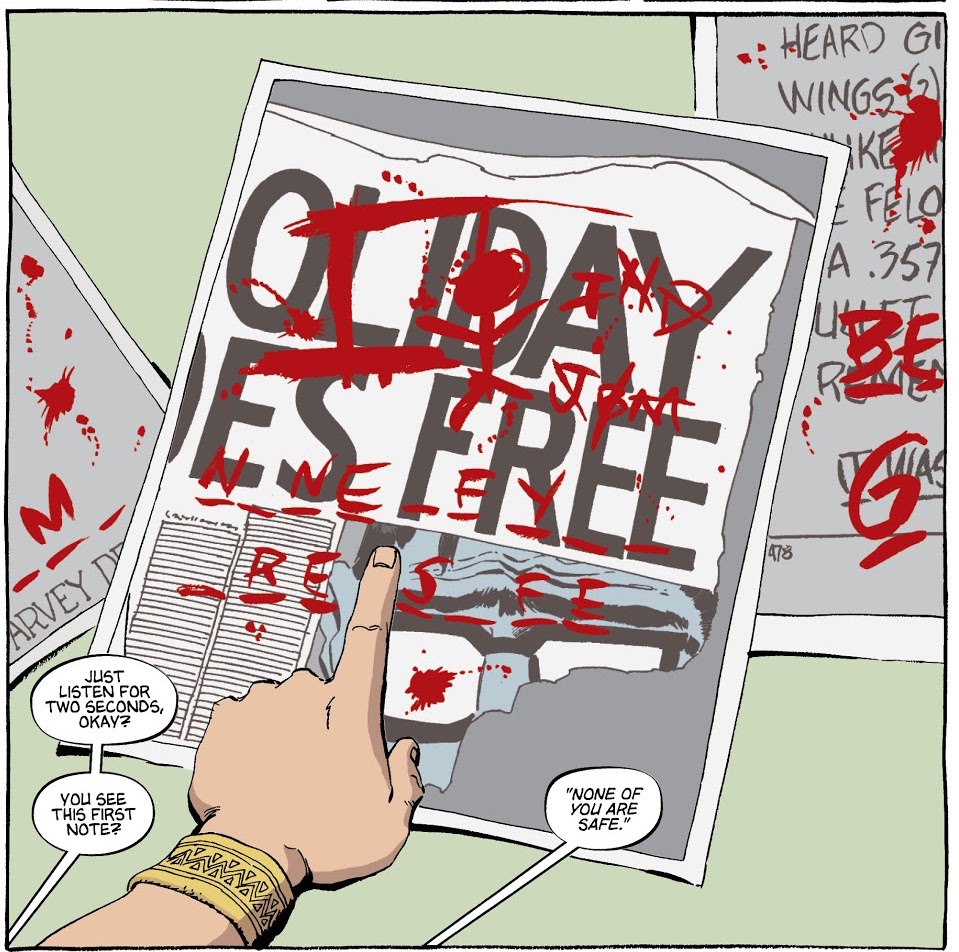 Dick Grayson points out that the Hangman’s note says “Nine of you are safe.”

Batman confirms his hunch and arrives at Sofia Gigante’s penthouse. There, he discovers a hidden room behind a bookcase filled with Hangman gear. That is until a noose slips around Batman’s neck, hoisting him up, and revealing the culprit to be…. Catwoman? 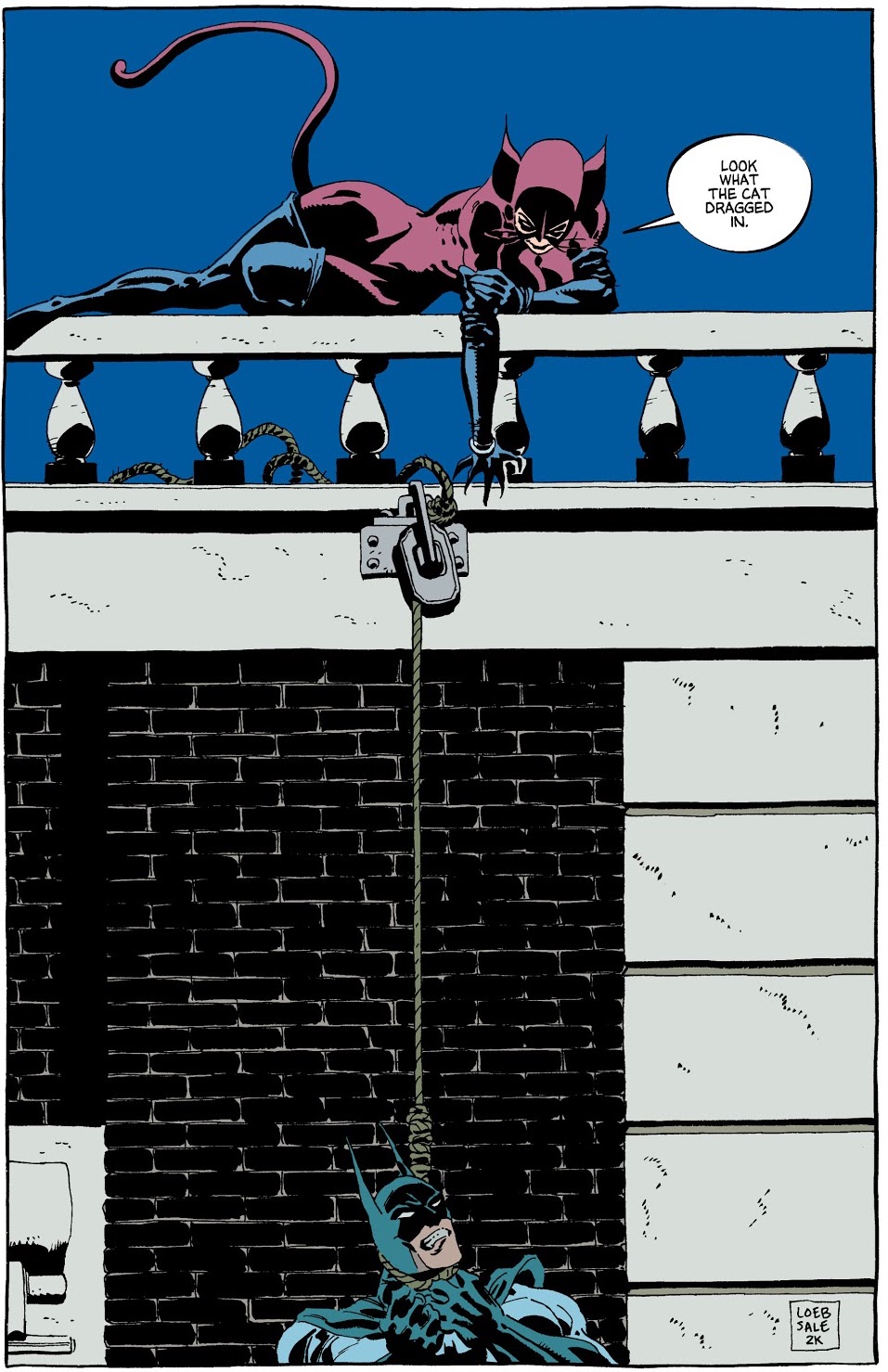 Catwoman is present at the latest Hangman hanging.

Admittedly, while Dark Victory is amazing as a whole, Revenge may be the weakest chapter yet. There are so many time-skips that it makes for a slightly disjointed read. Even the awesome pay-off of the Calendar Man’s plot is subdued when he is defeated literally one page later. While, Revenge has a lot of good character moments and plot progression, this chapter still is considered the weak link.