“Who Are the Secret Six?” – Part Three 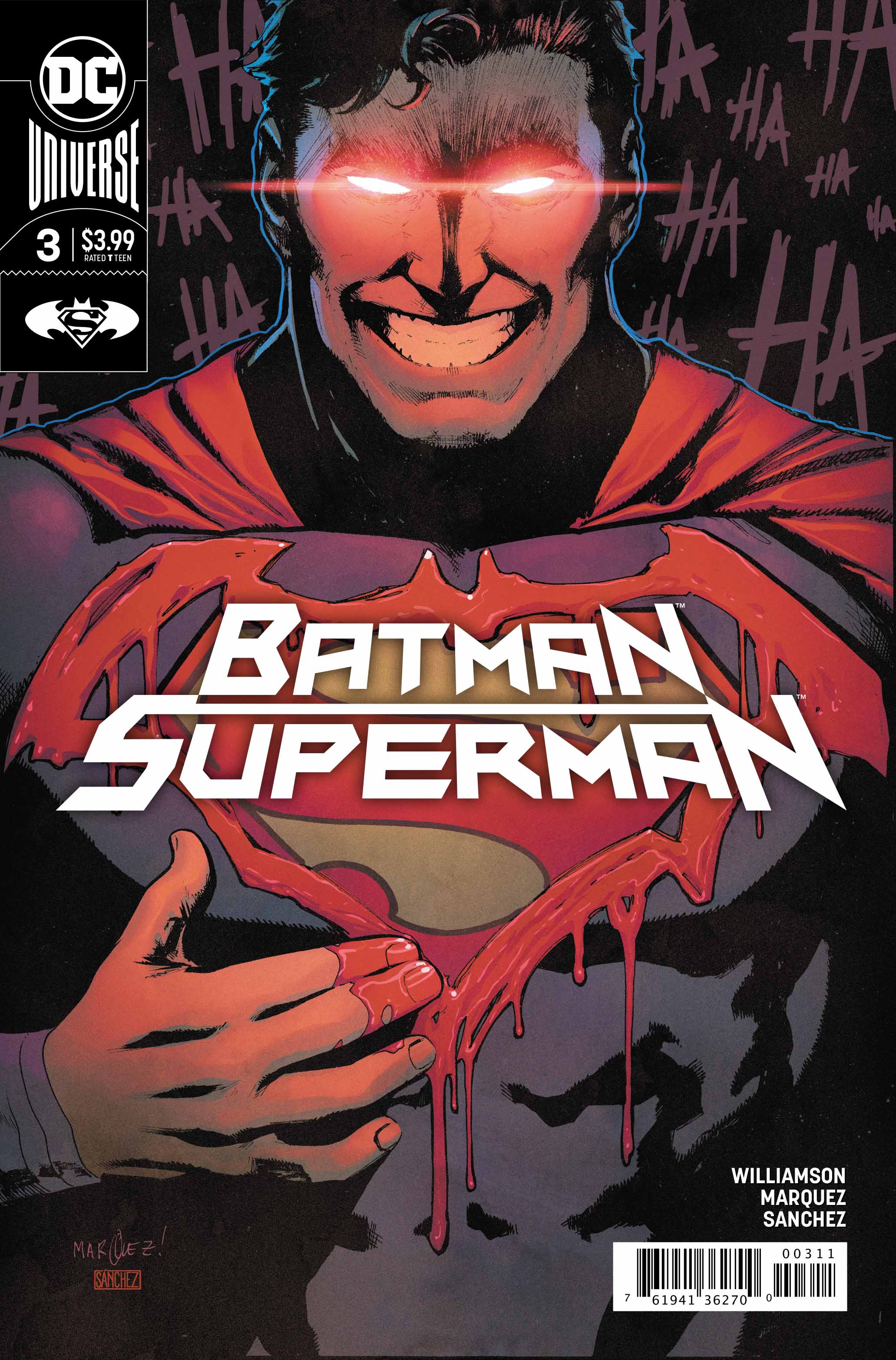 Superman goes undercover as The Superman Who Laughs in this week’s chilling Batman/Superman #3, in order to learn the identity of the Secret Six.

Greek writer Pausanias’ aphorism “Know thyself” is at the heart of Batman/Superman #3, as the World’s Finest team tries to uncover The Batman Who Laughs’ (TBWL) plan.

Last issue revealed that Batman, at the end of The Batman Who Laughs miniseries, imprisoned TBWL underneath The Hall of Justice. Having learned that the villain has infected six heroes, Superman decides to infect himself with TBWL’s Joker toxin in order to glean information from their prisoner. Meanwhile, a reluctant Batman watches from the monitors, as The Superman Who Laughs approaches his enemy.

Although the plan initially fails as the villain sees through Superman’s ploy, Batman was able to deduce that Commissioner Gordon was one of the infected heroes. Upon confronting Gordon, Batman and Superman faced off against the “robo-bunny-bat-mech suit” that Gordon wore during the “Superheavy” and “Bloom” story arcs.

Williamson once again pens a phenomenal issue. While issue one did a fantastic job of setting up the series, and issue two was an indulgent action romp, Batman/Superman #3 sets in motion events important for the overall continuity of DC comics. By the end of the chapter, readers not only discover a new member of the secret six, but also learn that the events of Justice League directly tie to what’s going on in Batman/Superman. The last panel of the issue set up an exciting and much-anticipated conflict between TBWL’s Secret Six and Lex Luthor’s Legion of Doom. 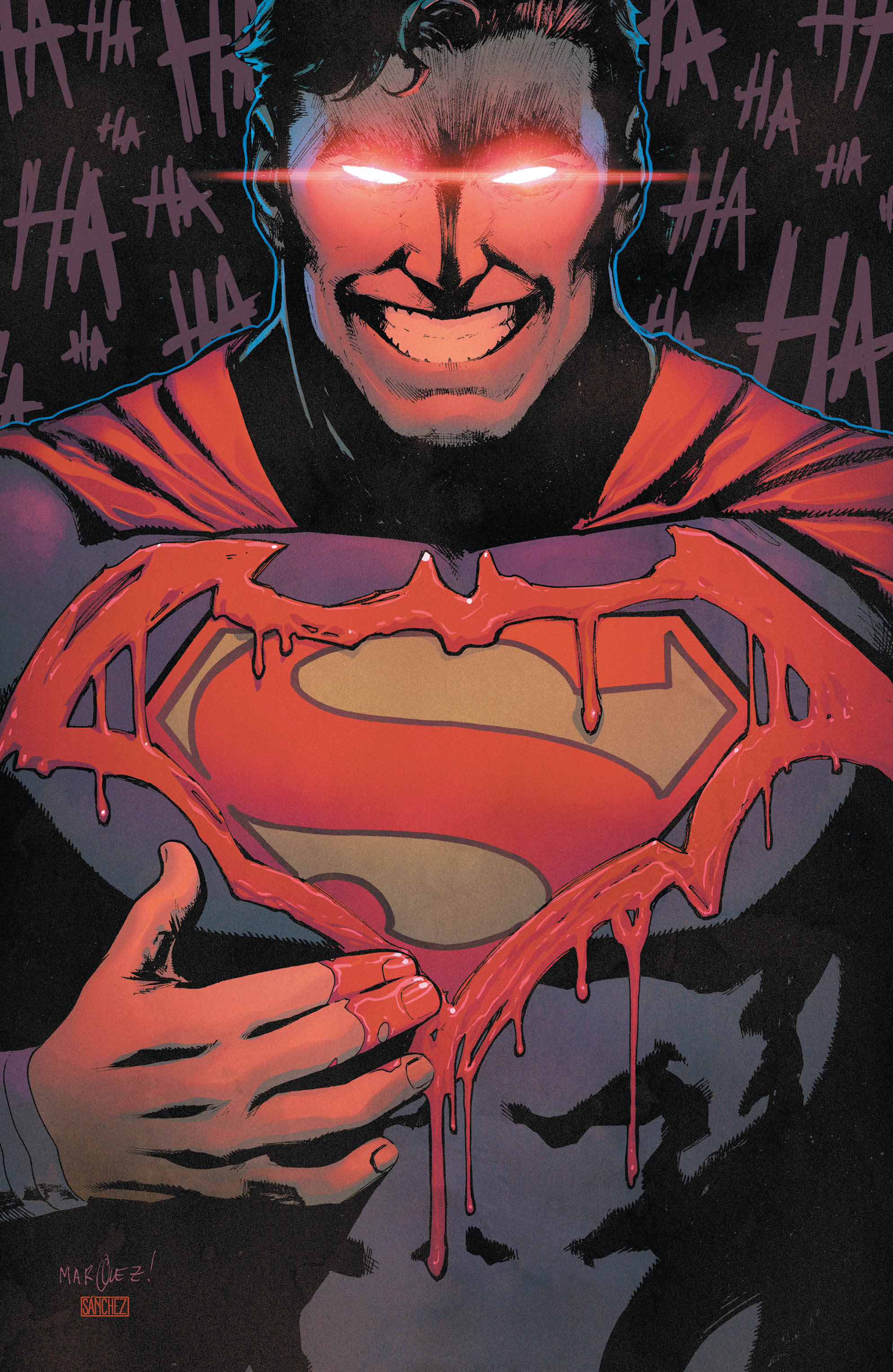 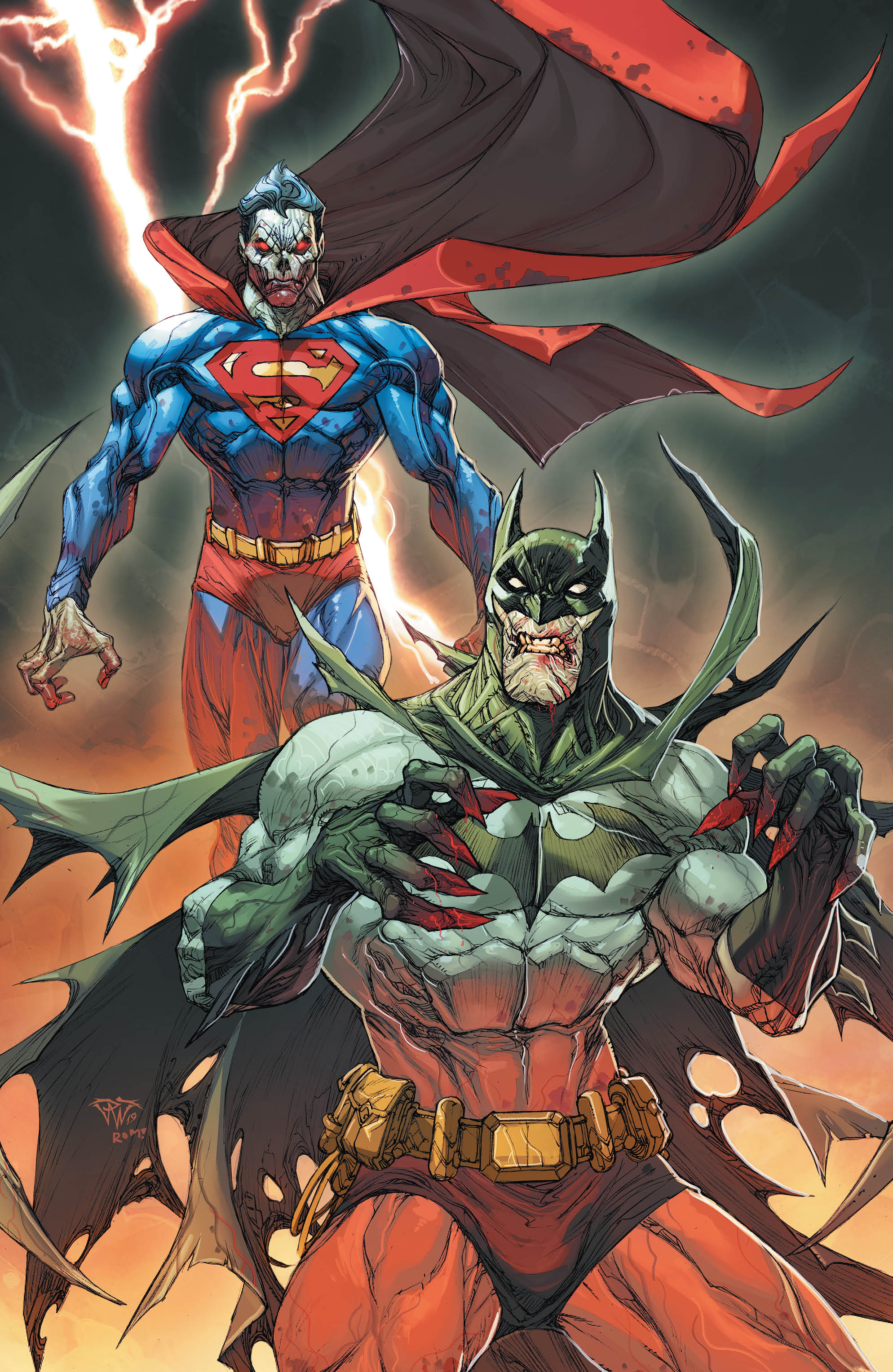 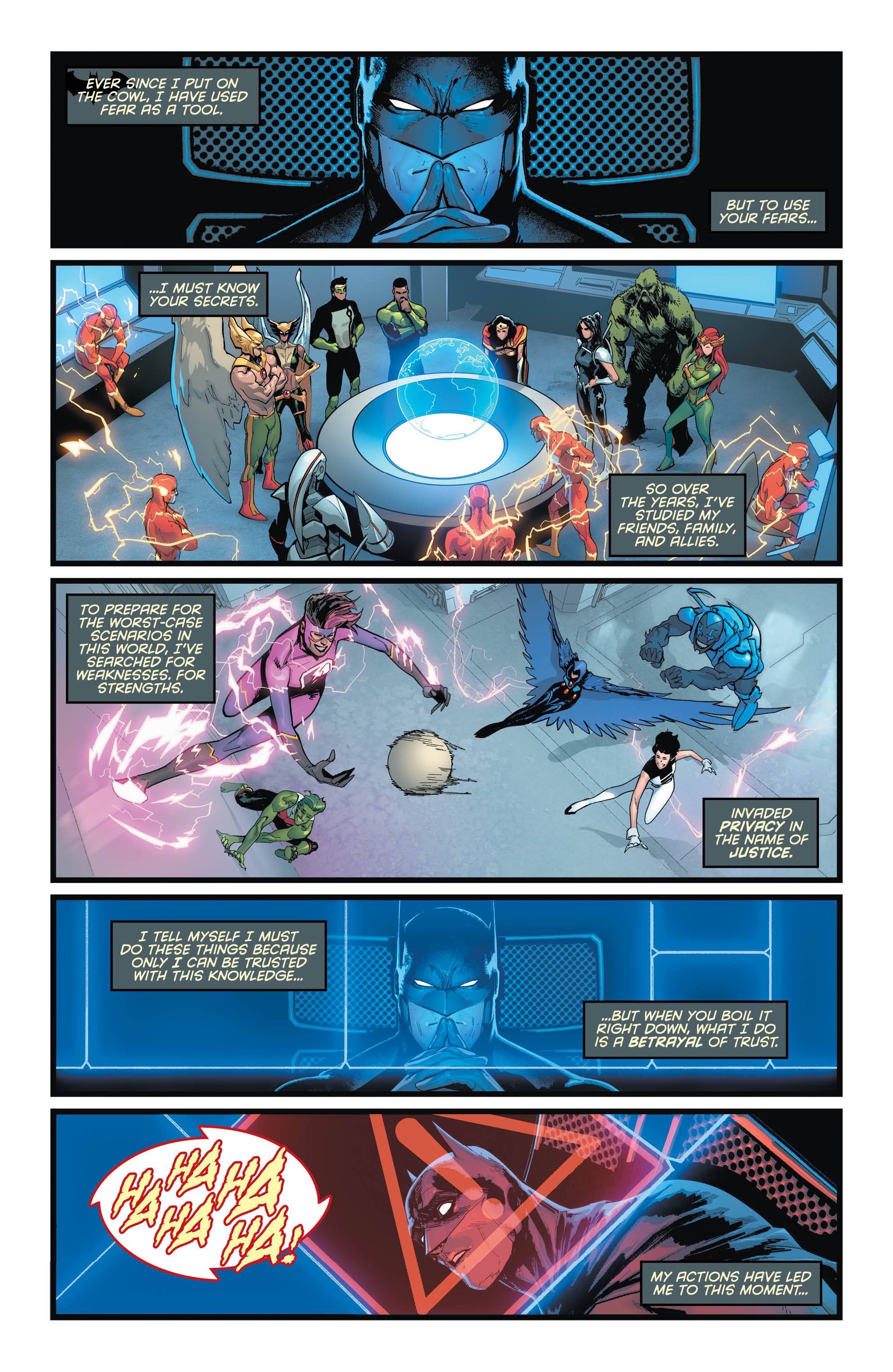 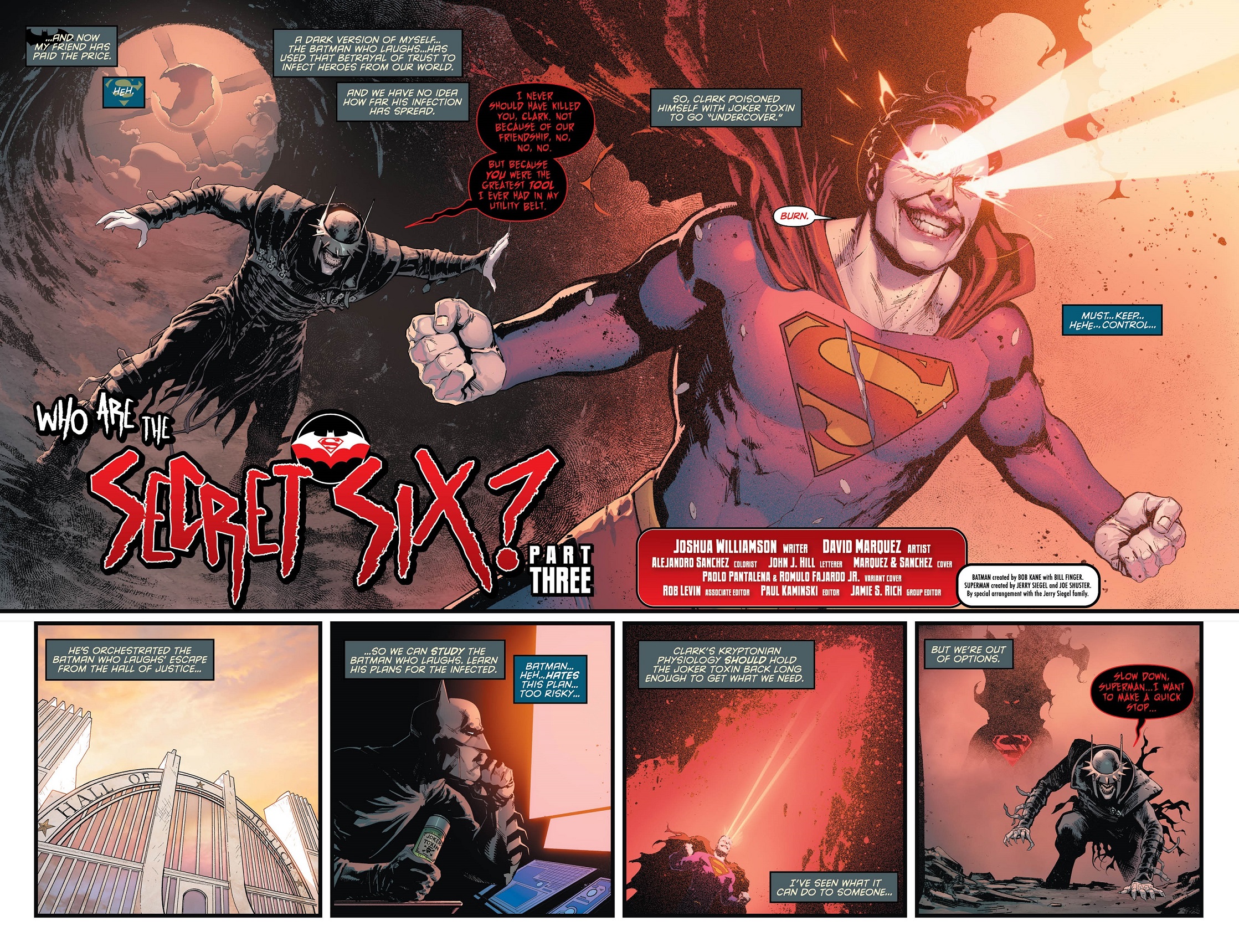 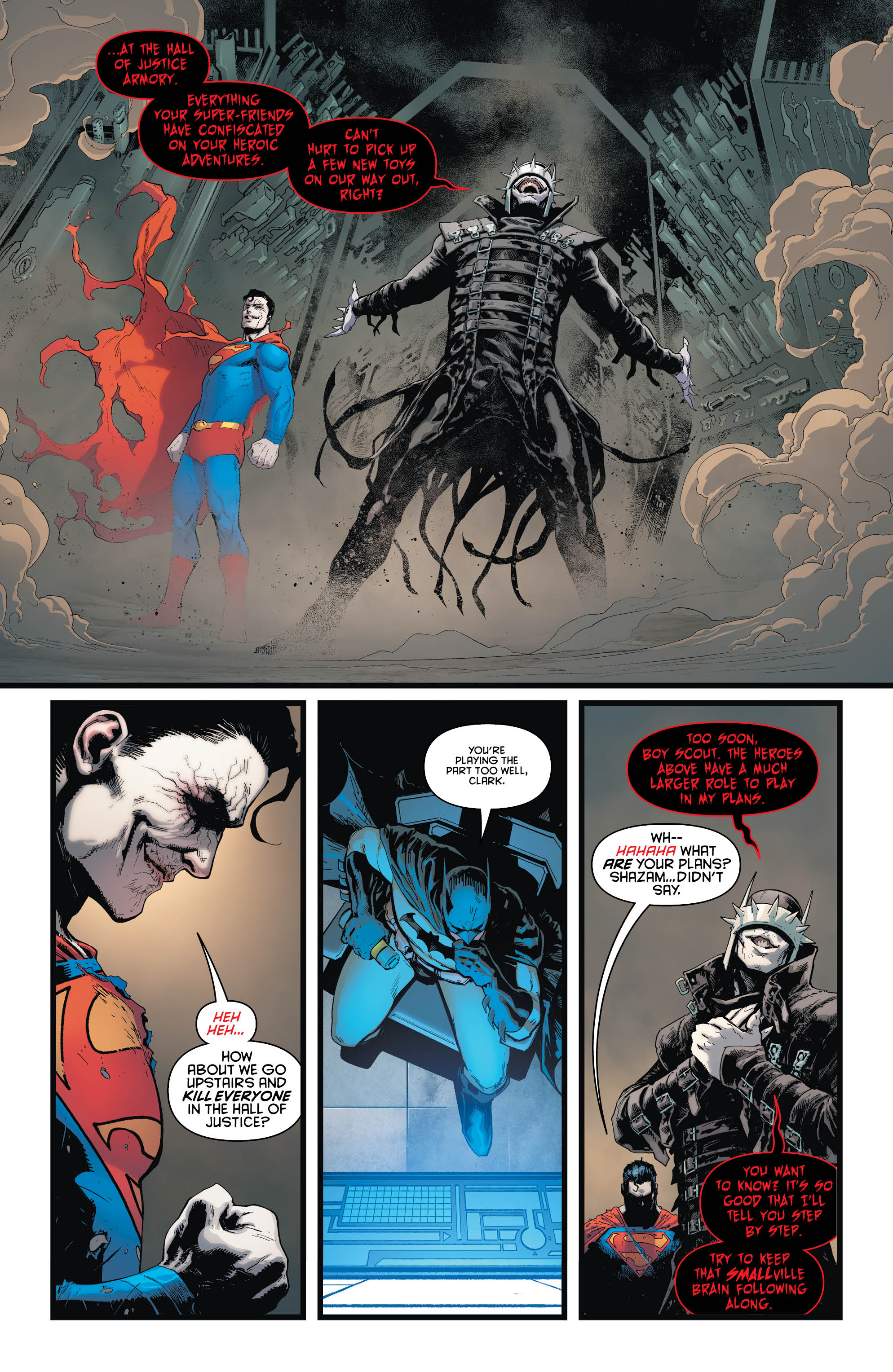 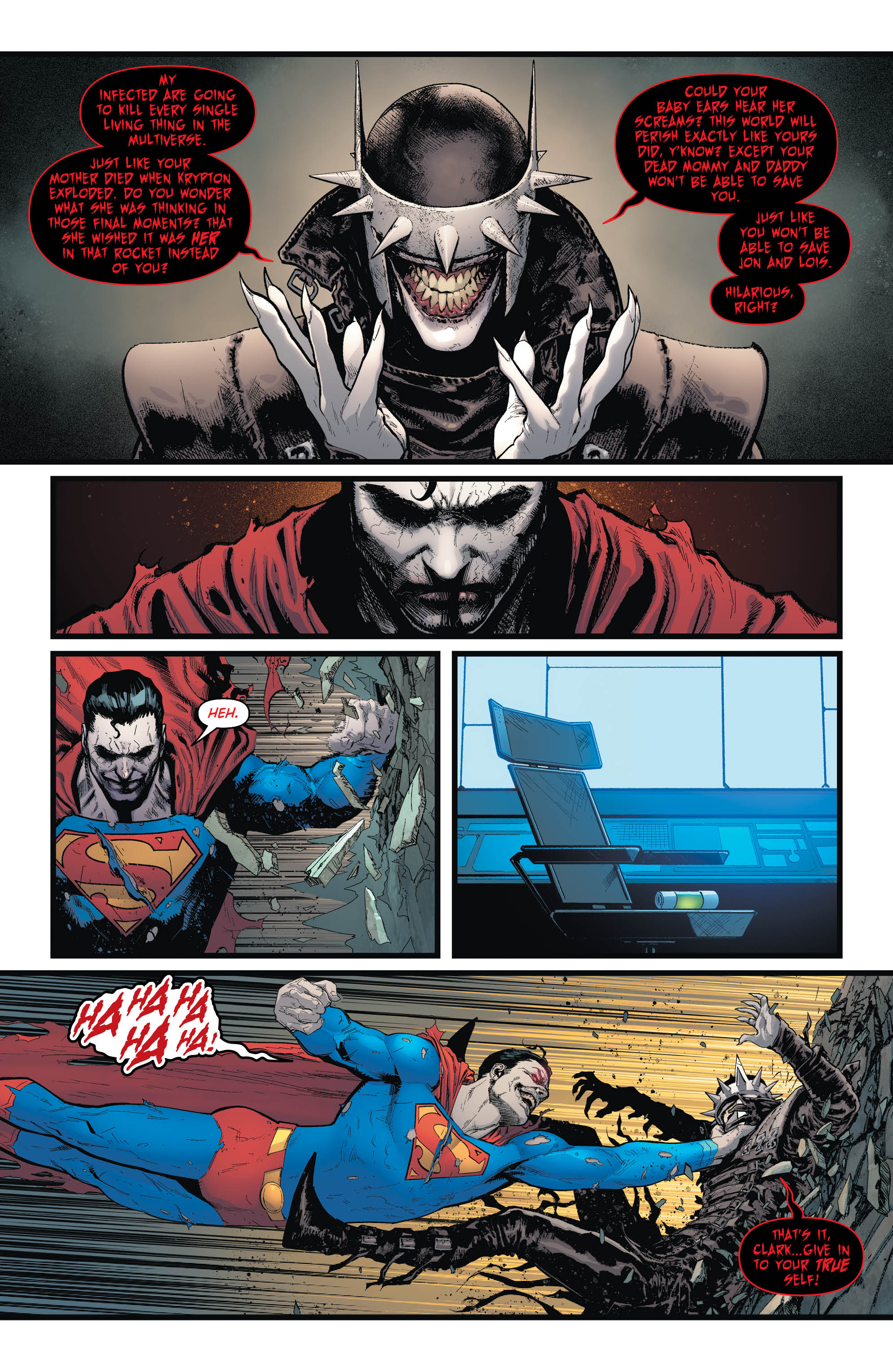 Unsurprisingly, David Marquez’s pencils are stunning in this issue. He continues to carve out an artistic look that is simultaneously unique and fitting for DC’s house style. One of the impressive aspects of this particular issue is the artist’s use of symmetrical panels. It’s almost trite at this point to acknowledge that Batman and Superman are in many ways opposites; one is a rich coastal elite playboy with no superpowers; the other is a superpowered alien farmboy from Kansas. Therefore, they often serve as foils for each other, in regards to characterization.

In Batman/Superman #3 Marquez takes this concept and applies it to his panel layouts. There are multiple times that the field of each page is symmetrically balanced by each character. It’s subtle but nevertheless brilliant.

Batman/Superman #3 is another strong issue in what’s been a fantastic run, thus far. Williamson has masterfully crafted three issues that not only tell an amazing World’s Finest story but also feel important to the larger DCU. Artistically, Marquez might be one of the best Marvel-poached artists DC has contracted in recent days.

Overall,  Batman/Superman #3 is a fun and surprising issue that will undoubtedly leave its readers wanting more.