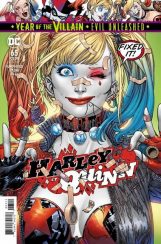 Harley Quinn #65 is here at last and what a roller coaster ride it’s been so far. If you haven’t read the last issue you can catch up a tad by clicking here. When we left Harley we were transformed by a comic within a comic and a story being told both in both the background and foreground of the comic. The biggest point to the story, however, was that Harley’s Mom was dying from the cancer that has plagued her since the December issue. I still love the solidarity of the comic in facing something so sad and painful for the main character.

Moving forward with Harley Quinn #65 we were spared the death and the funeral, but have moved forward to just after and the aftermath for poor Harley. This issue is meant as a coming to terms and moving forward arc. Let’s dig in a bit.

So, at the beginning of this issue we see Harley Quinn grieving the loss of her Mother. After memories flood her, she makes the decision to go and stay on the island that appeared next to her city to overcome her grief. The next thing we know Mirand’r has come in search of Harley. It’s five days later and she finds Harls attired in a coconut bikini and calling herself a pirate queen. Ms. Quinn is obviously avoiding the world but Mirand’r is set on helping her through her grief. This finally gives us a taste of not only who she is but what happened to cause her to be the Herald of the Trials. Will it be enough to help Harley Quinn regain a semblance of her senses? 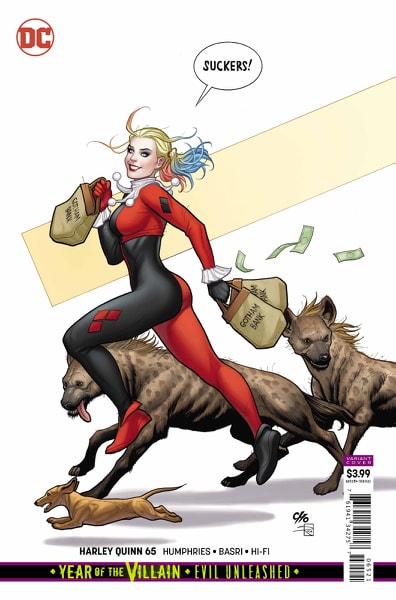 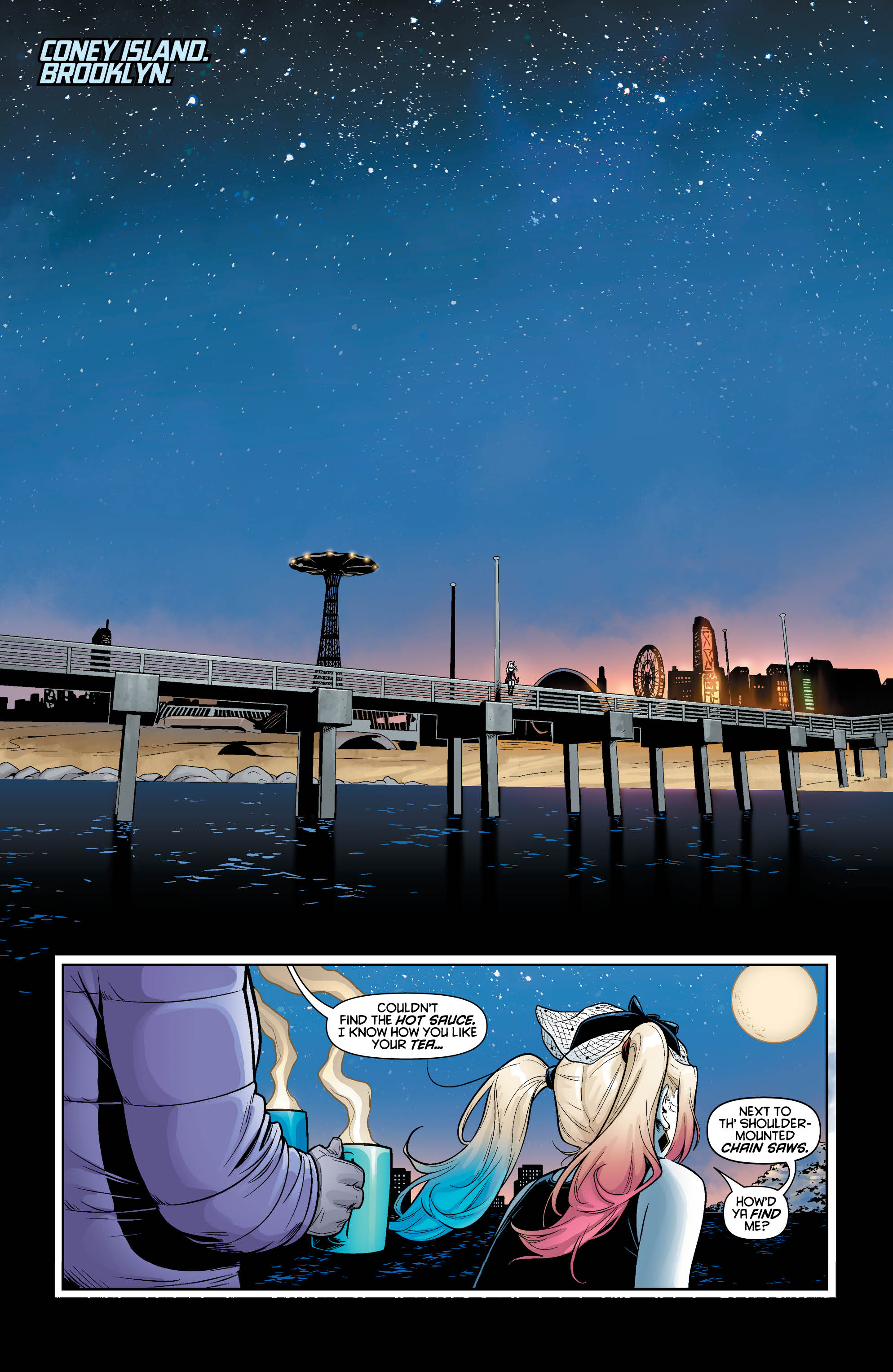 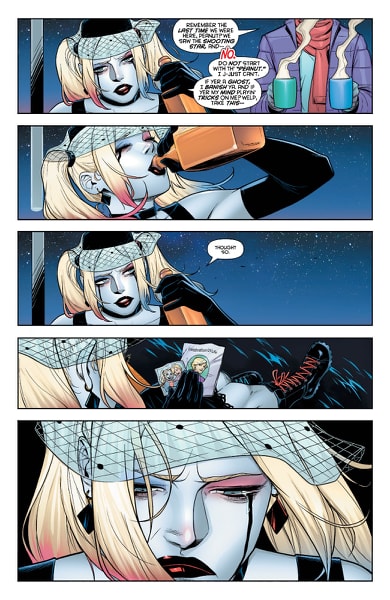 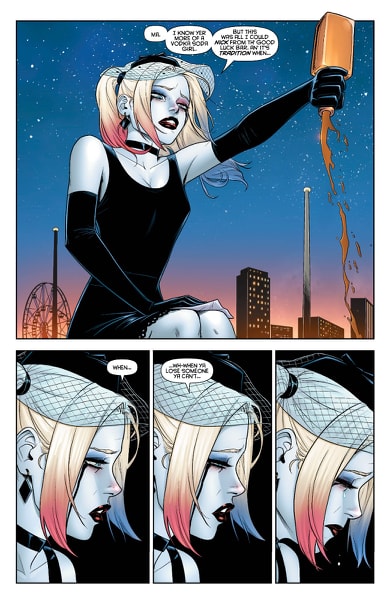 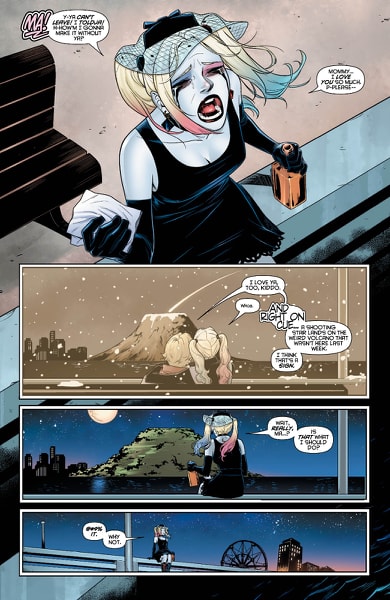 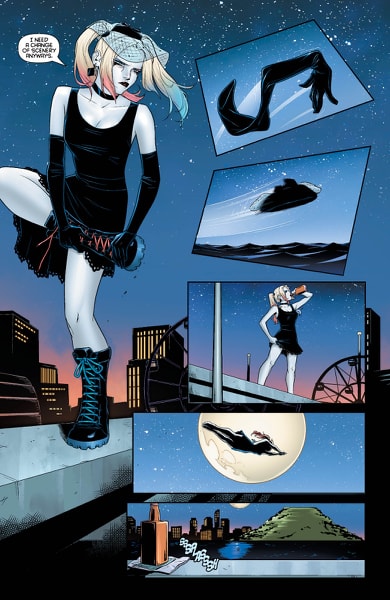 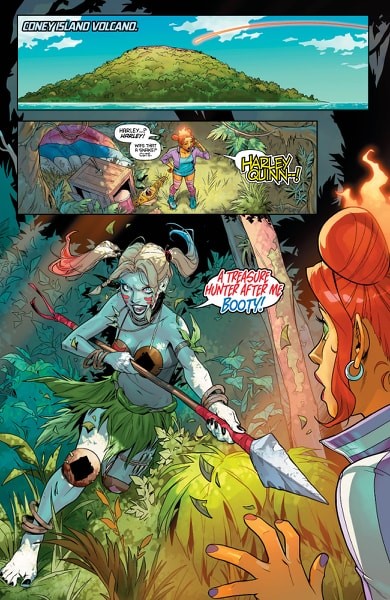 This was an issue that I had a few problems with; all of them are my own opinion though. Over the months that this story’s been built, it’s been done so with passion and care. Whether it be the Trials themselves, or the insight we get with Harley’s personal life. These were the beautifully balanced aspects that I loved. Not only were the trials full of excitement, but learning more about Harley and watching her character deepen were the perfect marriage. It honestly made me look at the character far differently than I had before. I realized that she was much more than she’d been portrayed as in the past.

This was no longer just a throwaway sidekick; she was standing on her own and holding her ground beautifully. I absolutely adored that. I loved seeing her dig her heels in and flourish, with great stories and good reasons for the way that said stories flowed. The side quests, Old Lady Harley, for instance, were groundbreaking too. It was absolutely stunning work by some great creative teams. This issue, however I did not like.

Without giving away too much, one of the main reasons I don’t feel like this issue worked for me was because it felt rushed. If I sit and think about the long game that the story was taking and playing, this issue feels almost like a smack in the face on multiple levels. Don’t get me wrong, the art is still perfection, but the story feels incredibly forced. Moments that should be heartfelt are lost under the progression of the story. It was jam packed and felt like too much had been crammed into it.

If all the elements had been paced better, and not “bing badda boom… here we are”, my feelings would’ve been different. Because everything happened so quickly though, it didn’t feel like the proper time was taken to focus on what should have been the main point to this story. It didn’t flow in the normal way this series has become known for, in my eyes. I really feel like rather than being a climatic experience, this one does a complete disservice to the character.