Gotham got to play with an Alice in Wonderland-themed villain and now, the Berlantiverse is going to be able to as well in the upcoming Batwoman. Not connected with the Batman-themed rogue Mad Hatter, Alice just happens to be another psychopath quoting the Lewis Carroll fairytales. Unfortunately, she has a personal connection with our heroine. In case you didn’t know, Batwoman’s Alice is in fact Kate Kane’s sister, Beth.

Rachel Skarsten was cast as Alice back in February. In line with previous Berlantiverse casting, Skarsten is no stranger to DC properties. In the short-lived Birds of Prey series from 2002, she played Dinah Lance, aka Black Canary. It’s pretty cool that Berlanti and co. love honoring past DC TV.

In May, the first look trailer for Batwoman was released to contentious reception. While not the strongest trailer, we did get our first look at Skarsten as Alice. From the brief glimpses we got as Kate took down the her Wonderland gang, Skarsten was pretty great as a fairly subdued psychopath with a penchant for Alice quotes.

With only three months to go, CW’s marketing is in full swing. Yesterday, they released a character poster for Skarsten as Alice. 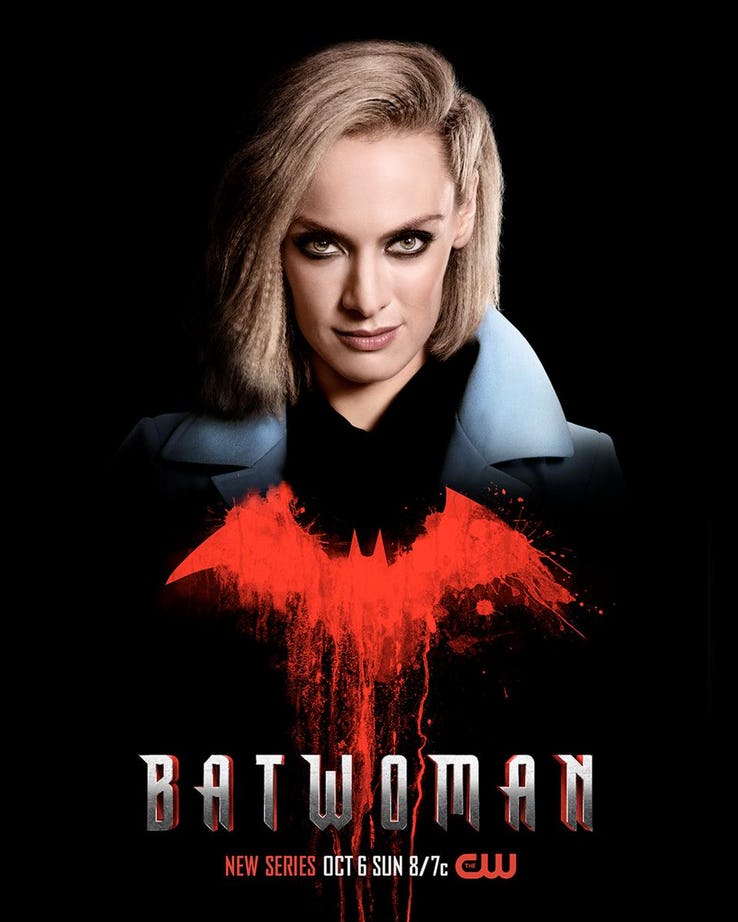 Unfortunately, there’s not much to take from this poster, it’s simply a shot of Skarsten in front of a black background. Nothing about her attire or look really hints at anything. The trailer at least gave us a character that resembled her comic-book counterpart, but this takes a step back. Maybe these are her civilian clothes? How does that hype us up? It really doesn’t. What would really get our attention is to put Skarsten in that garish outfit from the comics. You know the one.

However, I do like the spray painted Bat Symbol. The first look trailer clearly indicates a fairly cynical Gotham City, one that gave up hope that Batman would return. Therefore, it will likely take a guerrilla marketing campaign like this to gain Gotham’s trust.

Let’s just hope we get better marketing material closer to release date that hints a bit more about Batwoman’s Alice and her tragic connection to Kate Kane.

Batwoman is set to premiere on CW on October 6 at 8PM EST. Stay updated with DKN.