Batman and Superman Set To Meet The (Billy) Batson Who Laughs 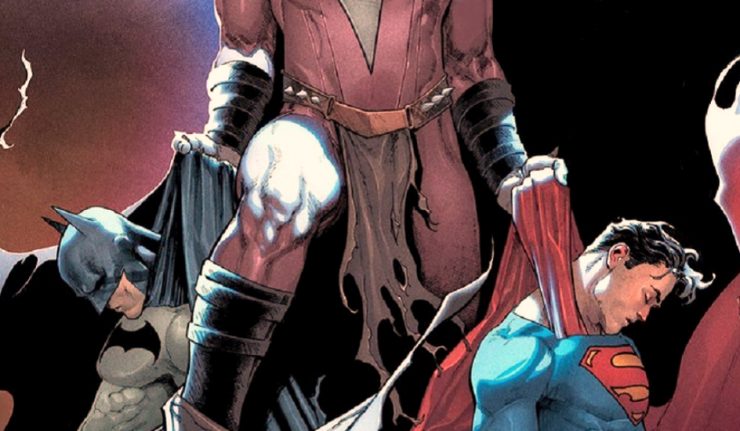 Batman and Superman are set to meet the (Billy) Batson who laughs in the upcoming Batman/Superman #1.

Thanks to a preview from DC Comics we know the interaction will happen in the new monthly series. Following directly on from the events of The Batman Who Laughs, the Man Of Steel and our very own Caped Crusader are in for a rough ride.

The official synopsis sets up what I think is going to a be modern classic.

Up in the sky, in the dark of the night, trust no one – for the Secret Six walk among us! Spinning out of the devastating events of DC’s THE BATMAN WHO LAUGHS, Superman and Batman join to­gether once more in an all-new monthly comic book, and they’re facing a terrifying new threat that could strike from anywhere. Writer Joshua Williamson (THE FLASH, JUSTICE LEAGUE/SUICIDE SQUAD) and artist David Marquez (Civil War II, Avengers) are teaming-up in BATMAN/SUPERMAN, debuting on August 14, 2019.

Writer Joshua Williamson has also taken to Twitter to share the first look at the corrupted Captain Marvel/Shazam.

Batman/Superman #2 cover! By @DaveMarquez & @loquesunalex! The first of the characters corrupted by the Batman Who Laughs. You’ll fear the Power of the Dark Multiverse. SHAZAM!!! pic.twitter.com/cBpnEhWwdU

I mean that’s just terrifying! The possibilities of what lie ahead are exciting, scarily exciting.

I think we are in for an absolute treat with this series and cannot wait. Are you excited? Will you be following Batman and Superman on their new adventures? Let us know.