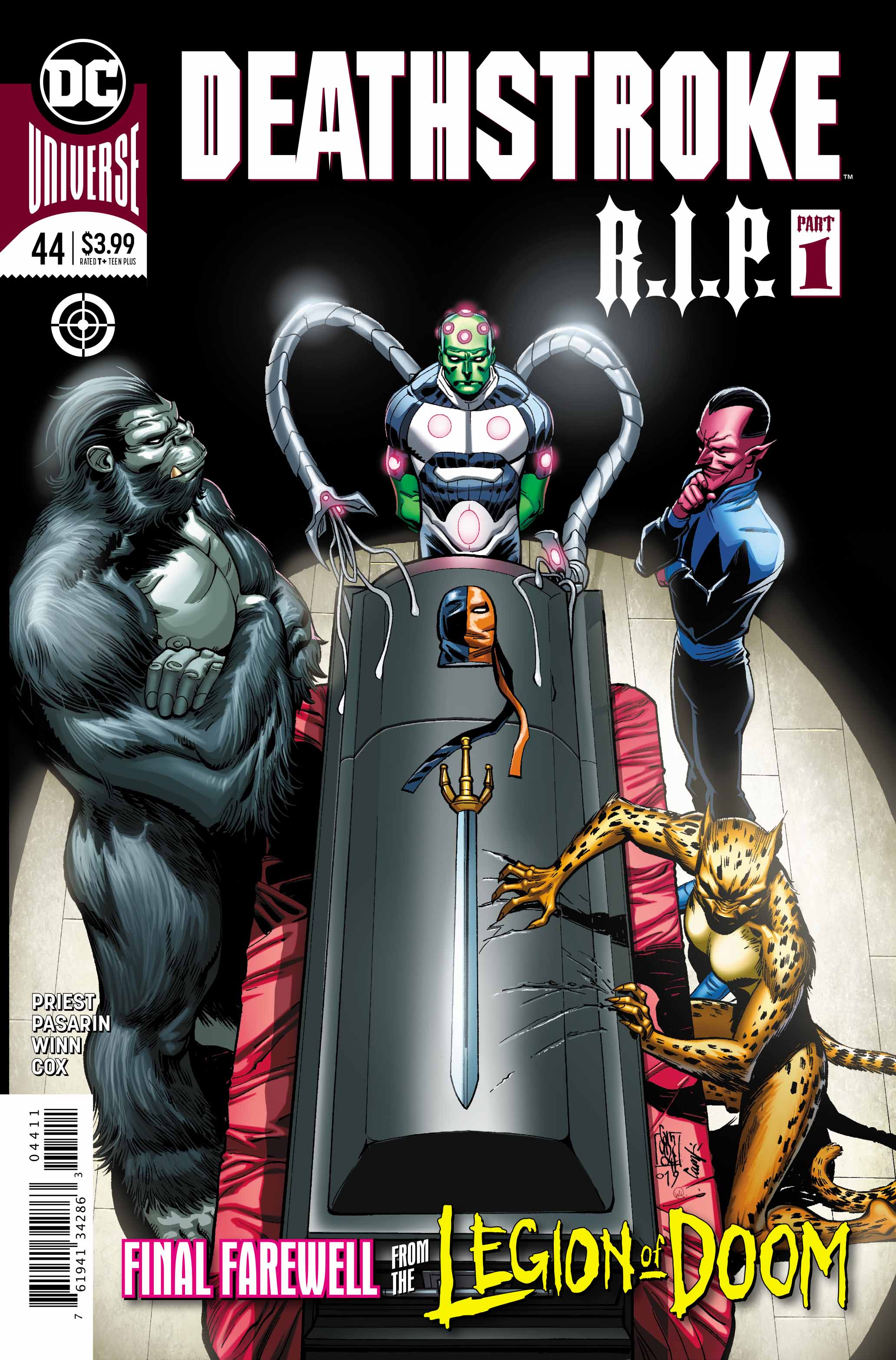 The Legion of Doom pays its respects to the late Slade Wilson in this week’s Deathstroke #44, as villains from across the globe gather to mark the death of DC’s deadliest assassin.

In case you missed the last few issues, let me be as clear as possible: Slade Wilson is dead. Not Presumed dead. Not mostly dead. Dead dead. Well – as dead as you can get in a medium that’s known for more resurrections than the Bible.

Anyway, Deathstroke was killed at the end of “The The Terminus Agenda” when Red Arrow shot an arrow through the eye, causing all kinds of drama and debate amongst the Teen Titans (see Teen Titans #30).

Deathstroke #44 tells the tale of Slade Wilson’s memorial service, hosted by Doctor Light and presided over by the Man of Steel. Various villains such as Talia al Ghul, Deadshot, Killer Frost and more take their turns praising and/or cursing the dead assassin. Eventually, the Legion of Doom arrives to confirm the death of the fallen villain, noting that Deathstroke was “one of the very few worthy” to stand with them.

Meanwhile, Jericho isn’t coping well with the death of his dad. He uses his mental projection power to take control of a super-powered someone to crash the funeral.

While funeral issues can be a challenge, Christopher Priest knocks it out the park. He does a great job flexing his characterization muscles, as his portrayal of the various villains speaking their last words over Deathstroke is brilliant. One moment you have those who are solemn, such as Talia, and others like Deadline, whose irreverence is accompanied with spit. I half expected the Lollypop Guild to show up and deliver a rendition of “Ding Dong the Witch is Dead”. Instead, we got the Legion of Doom, all of whom Priest presents magnificently. With Sinestro as their new leader, the Legion exudes arrogance in their interactions with everyone. Seriously, the whole set up is wonderfully executed. 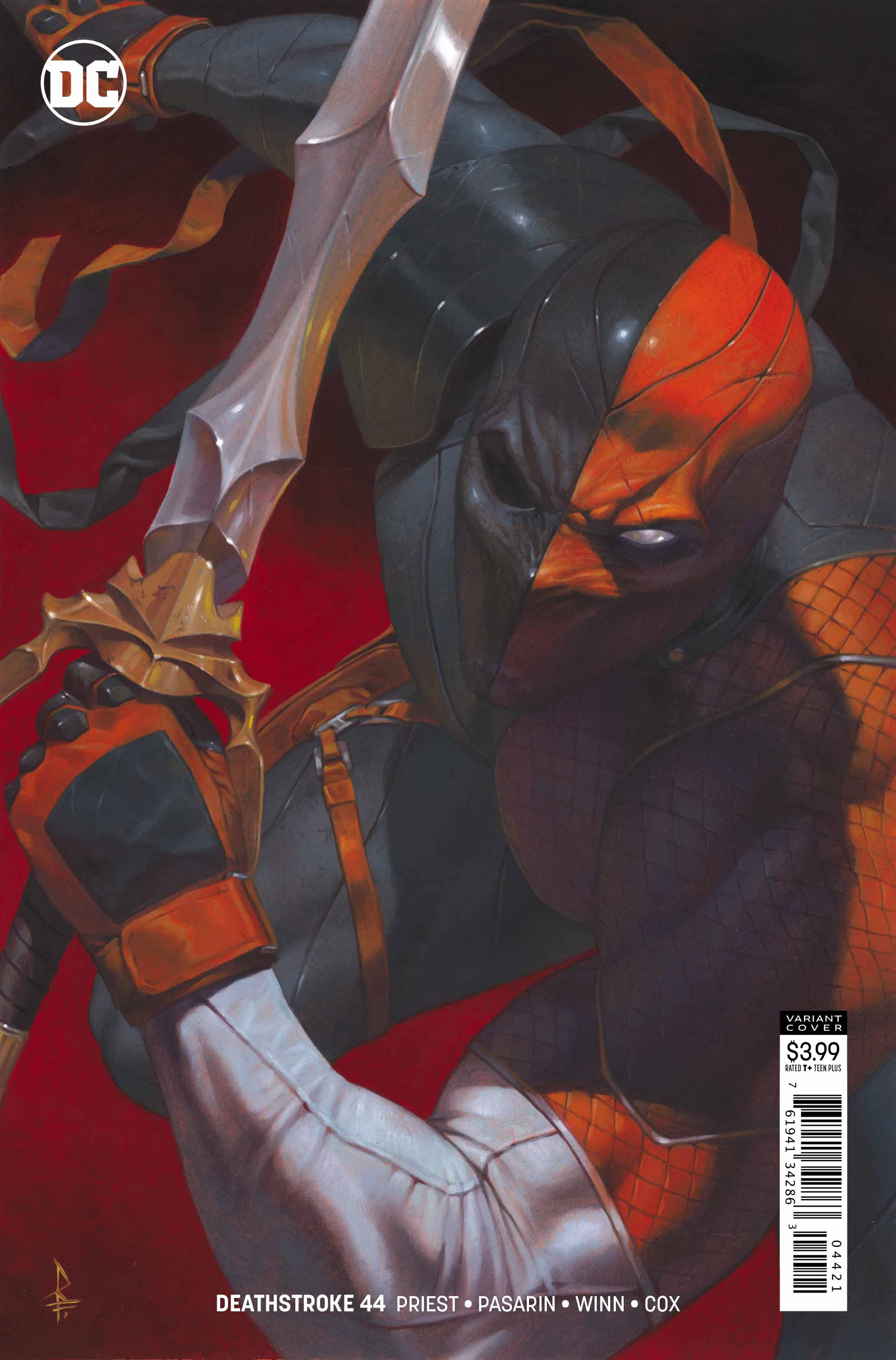 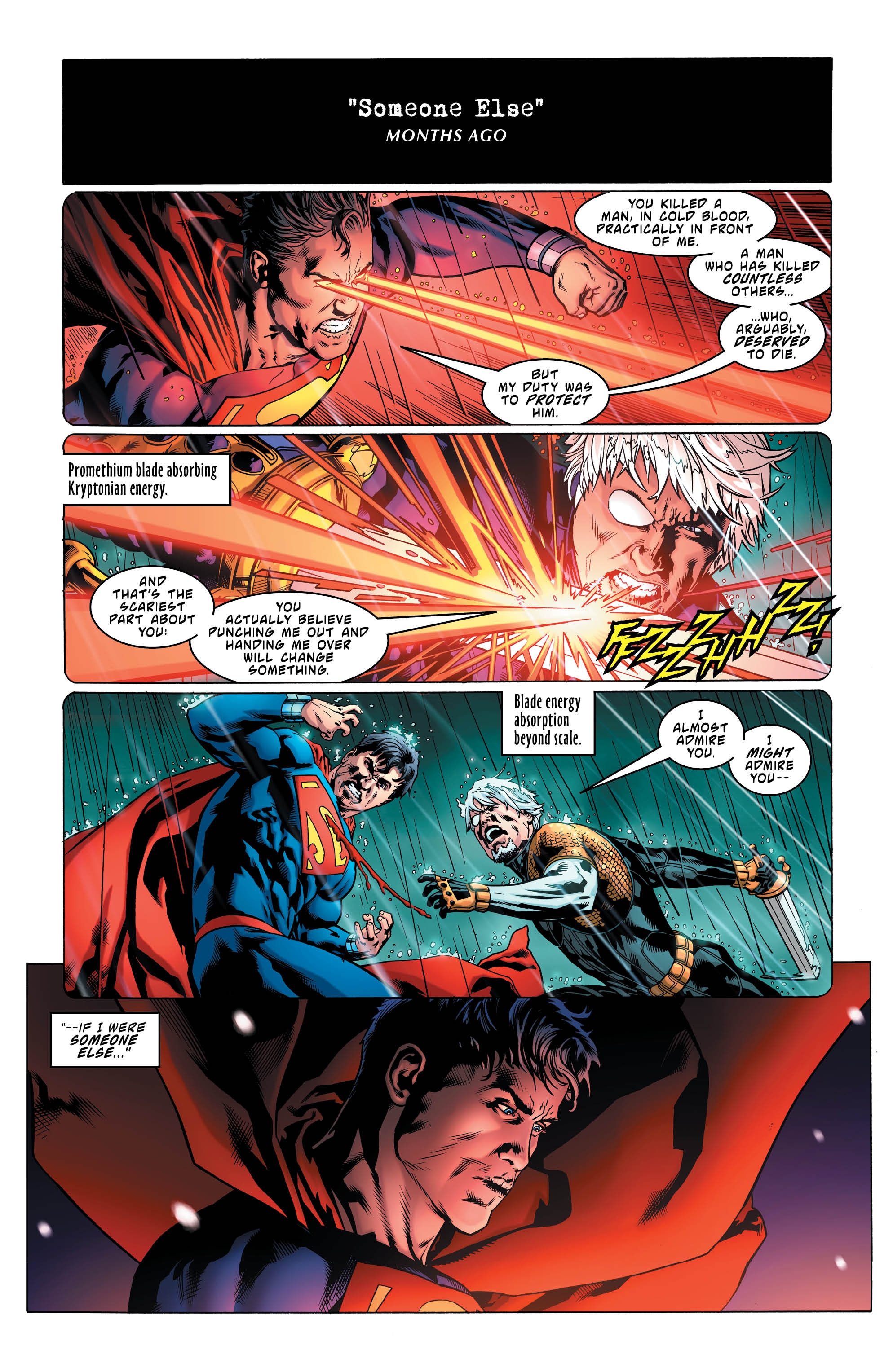 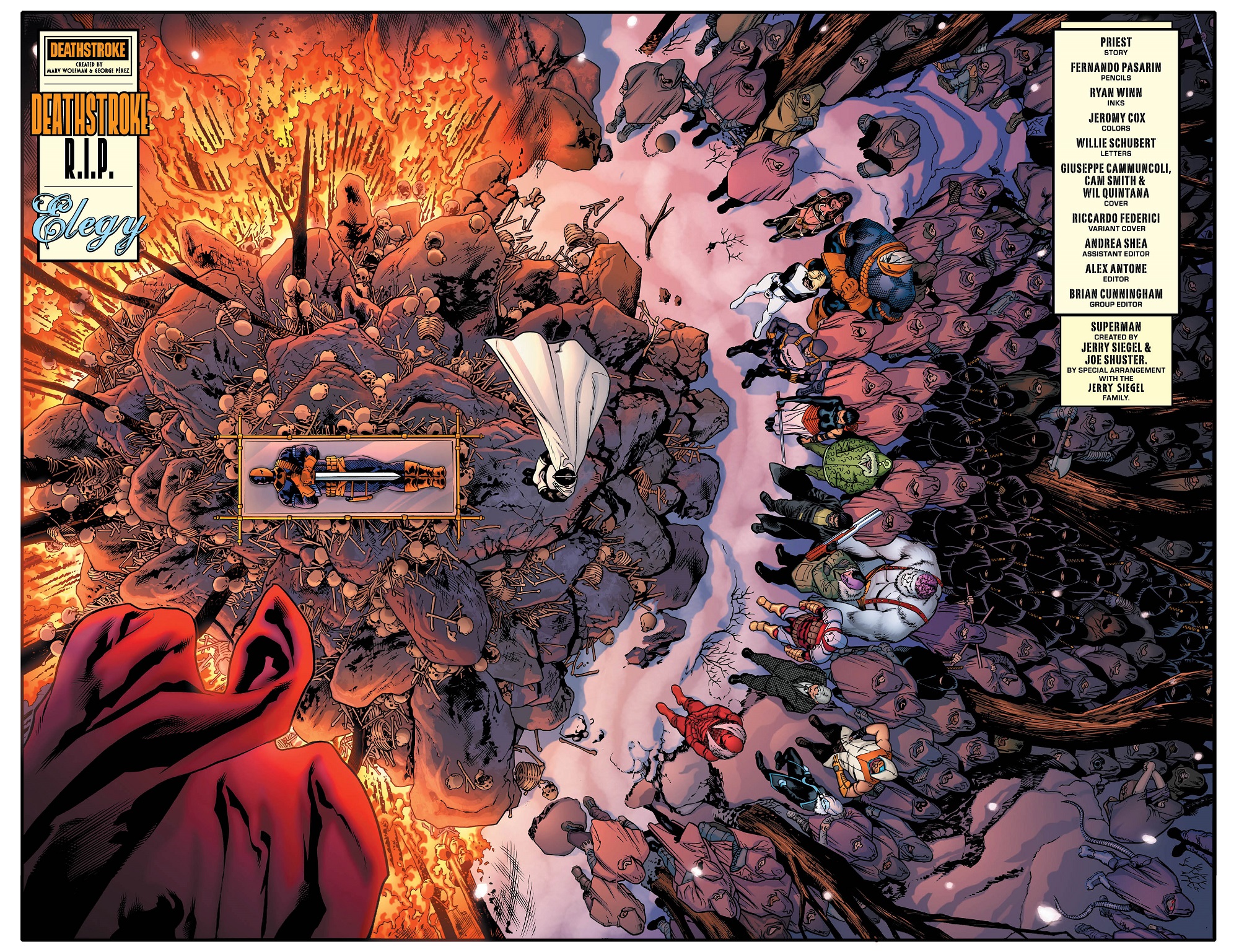 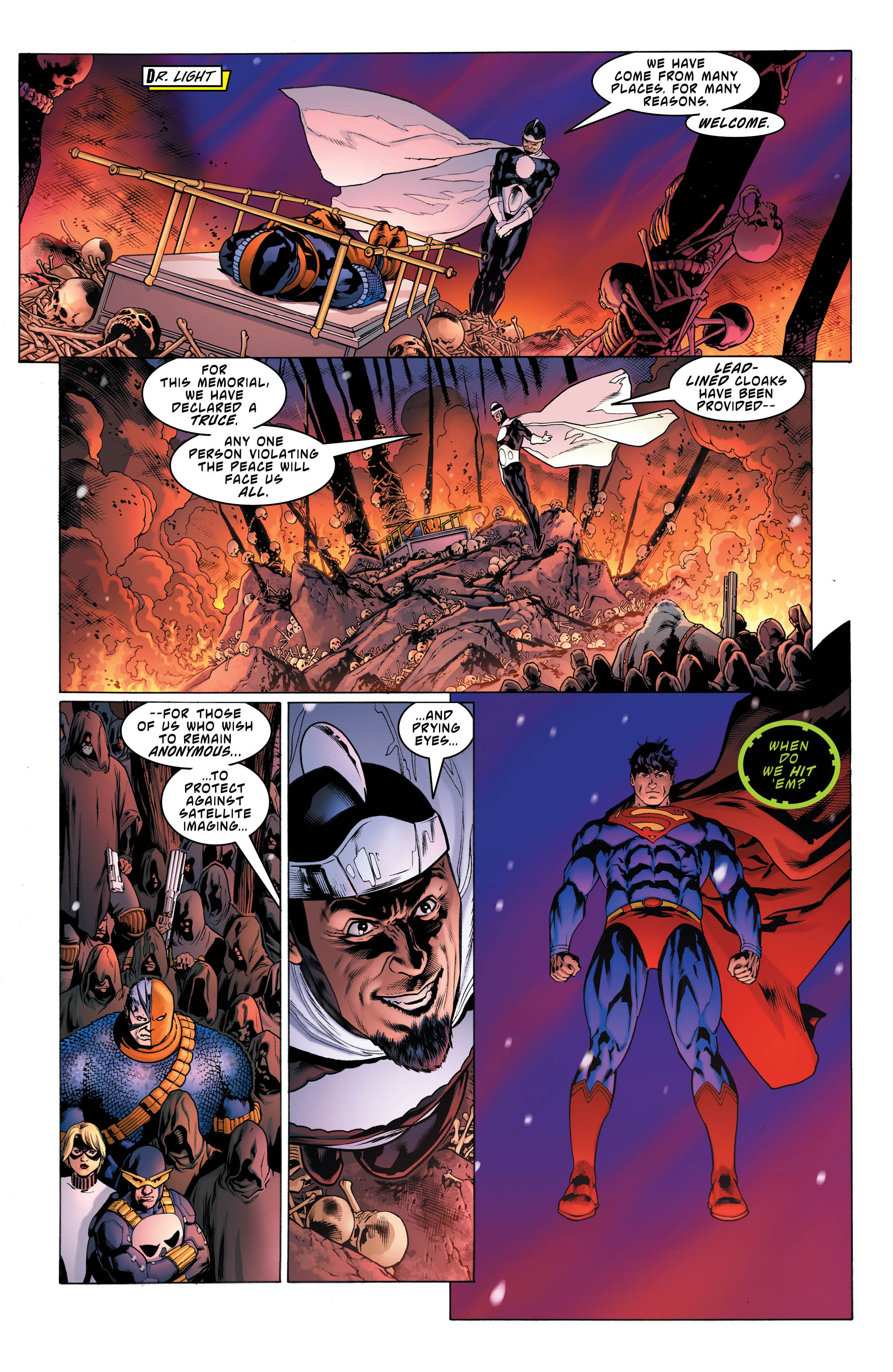 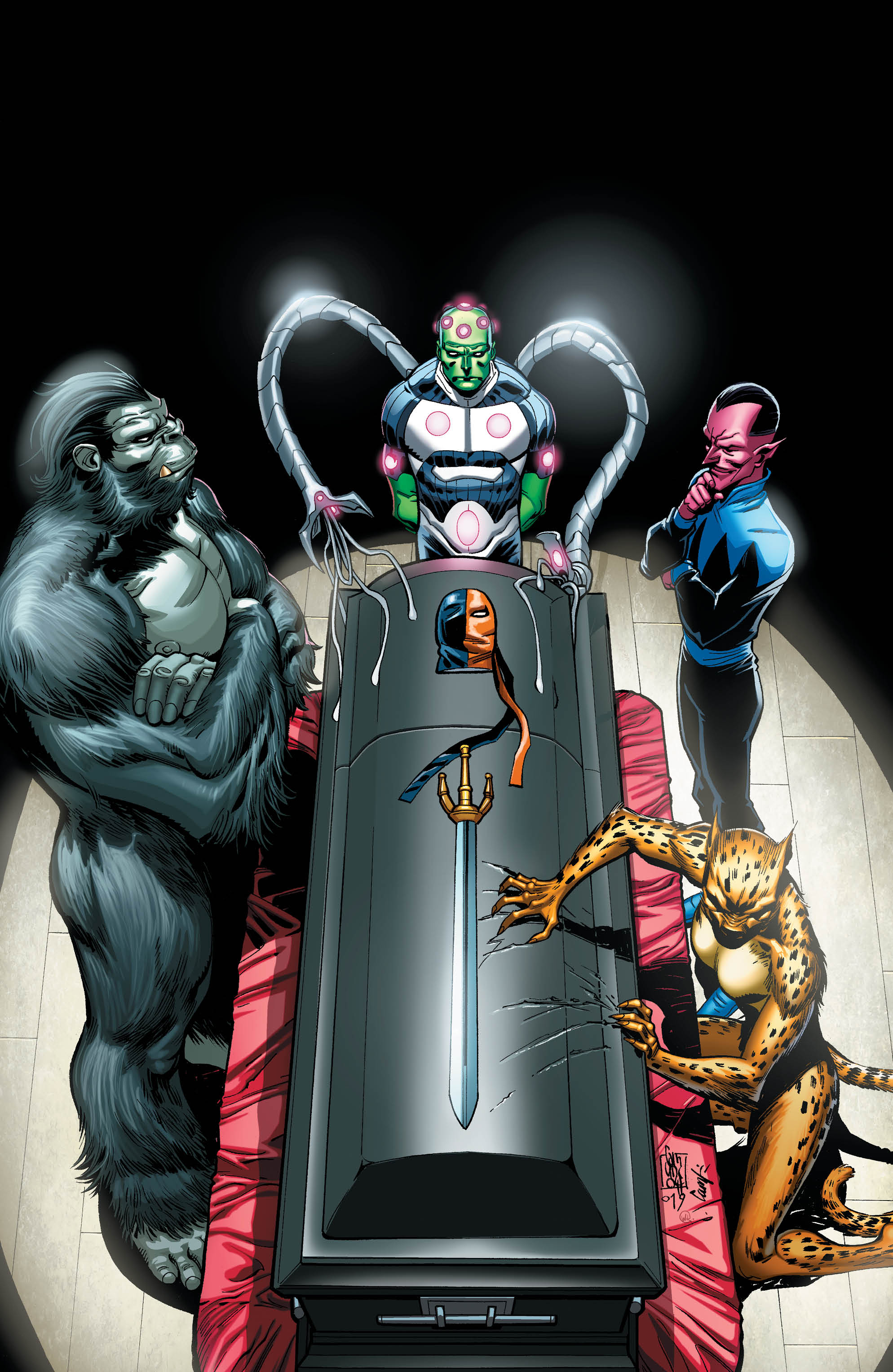 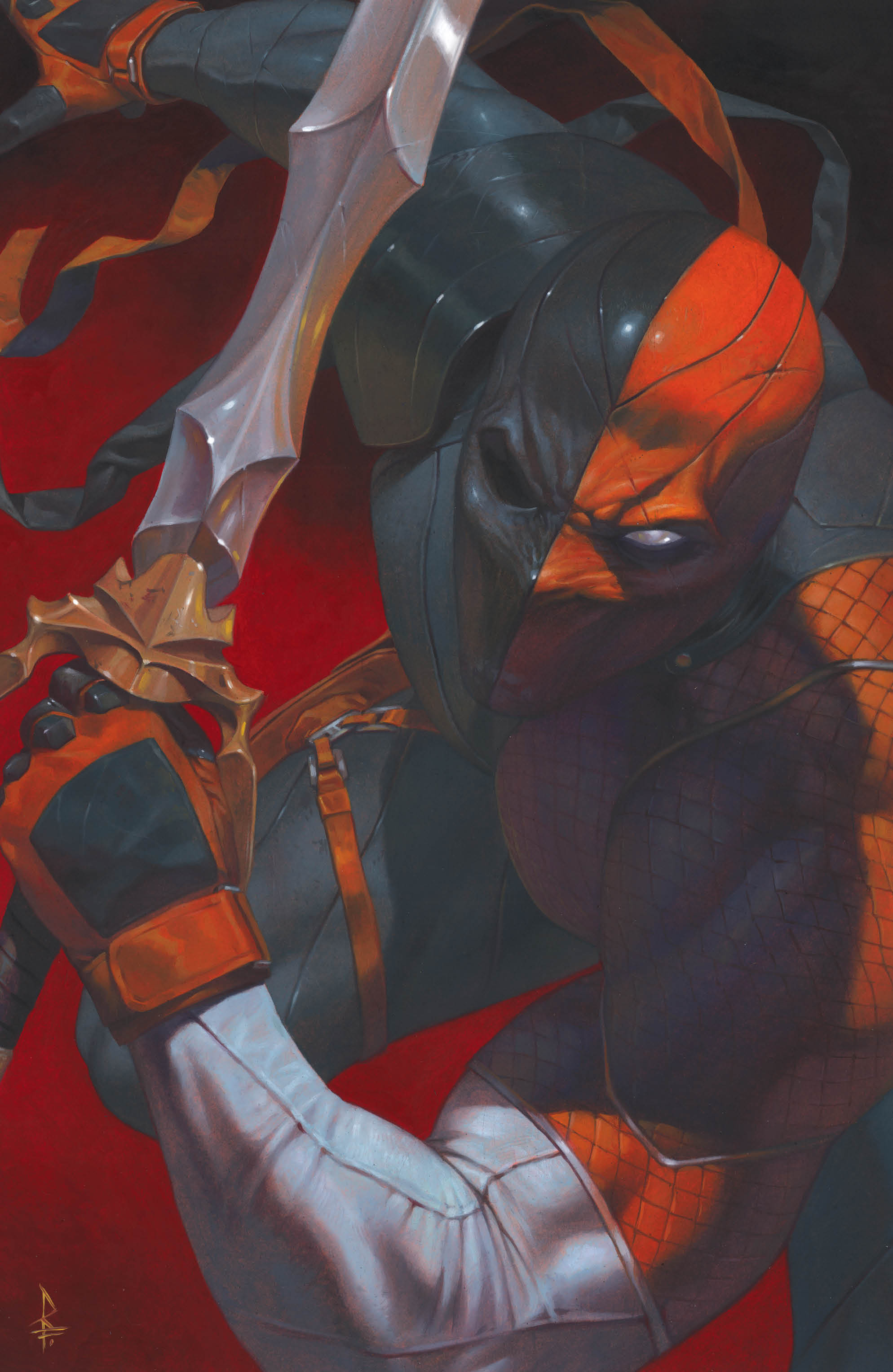 Pasarin’s pencils are great blah blah blah. If you’ve read any of my reviews for Deathstroke, you’ll know my opinion about Pasarin as an artist. I’ve beaten that dead horse a thousand times, but if you’re new (and you didn’t stop reading after the bad Bible joke), Pasarin’s work is so consistently good that I’ve officially run out of wonderful things to say about it. So I’m going to talk about the letterer, Willie Schubert.

Very few reviewers ever talk about letterers. Seriously, apart from those penned by or editor-in-chief, I don’t think I’ve ever read any reviews that address letterers, which makes them probably the most underrated of all comics creators. Therefore, I want to take a moment to highlight Willie Schubert’s wonderful work on this series. Schubert does an excellent job shifting font styles. He moves from the standard speech bubble font to various specialty fonts for Jericho’s telepathy and the scene-setting panels. Overall, his lettering is expertly executed, adding nuance to the title.

Deathstroke #44 is a borderline perfect issue. The script is fun, in a morose sort of way, and the art is excellent. While this issue was fantastic, it’s Deathstroke #45 that has me excited, as this issue’s ending sets up what should be an interesting story concerning Slade Wilson’s legacy. Final verdict: go buy this issue – it’s worth your time.