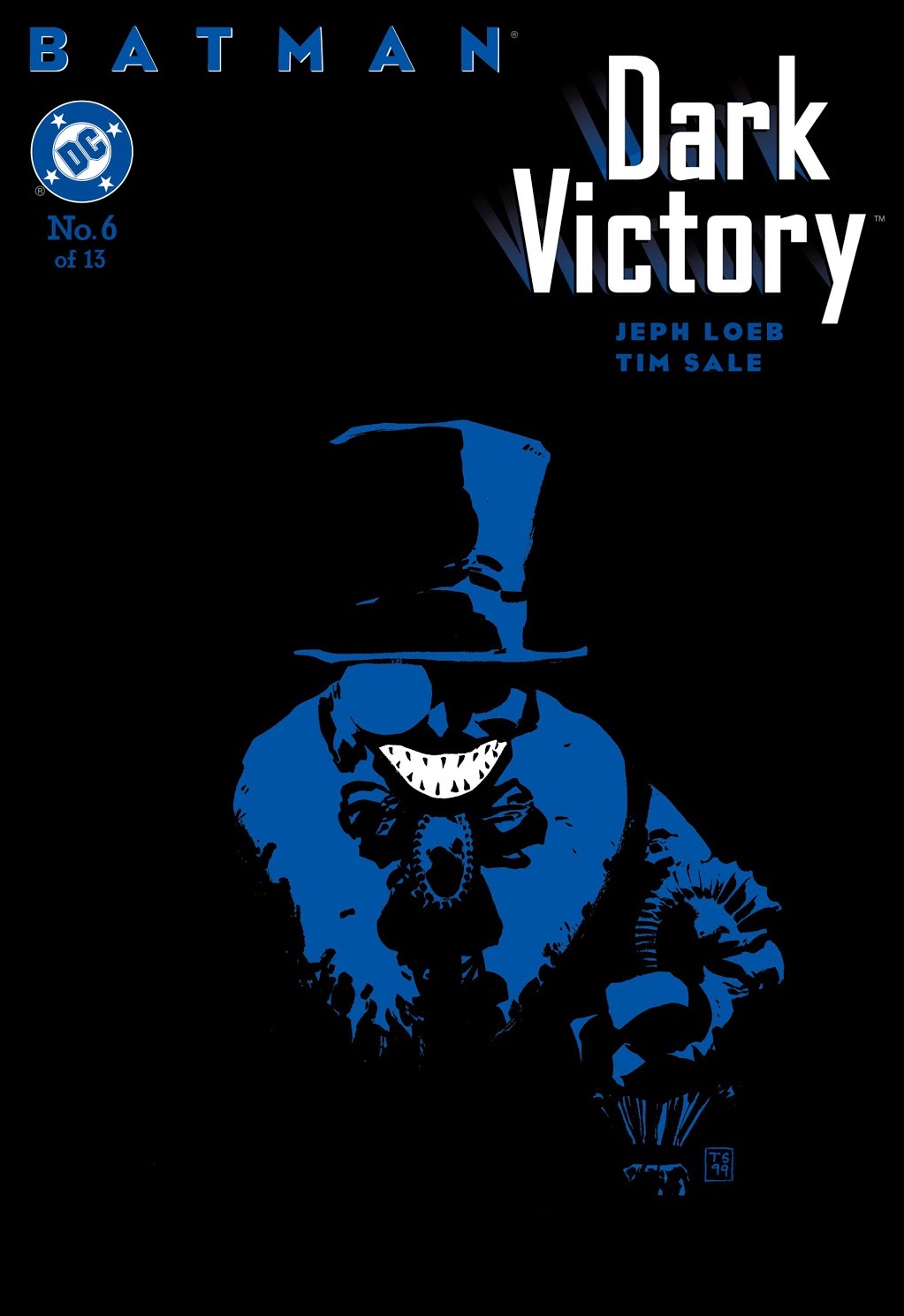 As the Falcone family’s hold on Gotham City slips, the city becomes embroiled in an all-out gang war for control.

Transitioning to New Crime and Zucco’s Acceptance of Change

Immediately, readers are thrust into a conflict between the Falcone gang and the Penguin’s henchmen, with Batman caught in the middle. Heading the Falcone faction are Tony Zucco and Edward Skeevers. But trafficking via overseas shipping imports is a dying area. The Penguin is now in command over it and even Batman is quick to note how the shipment heist is a sign of a weakened Falcone empire. 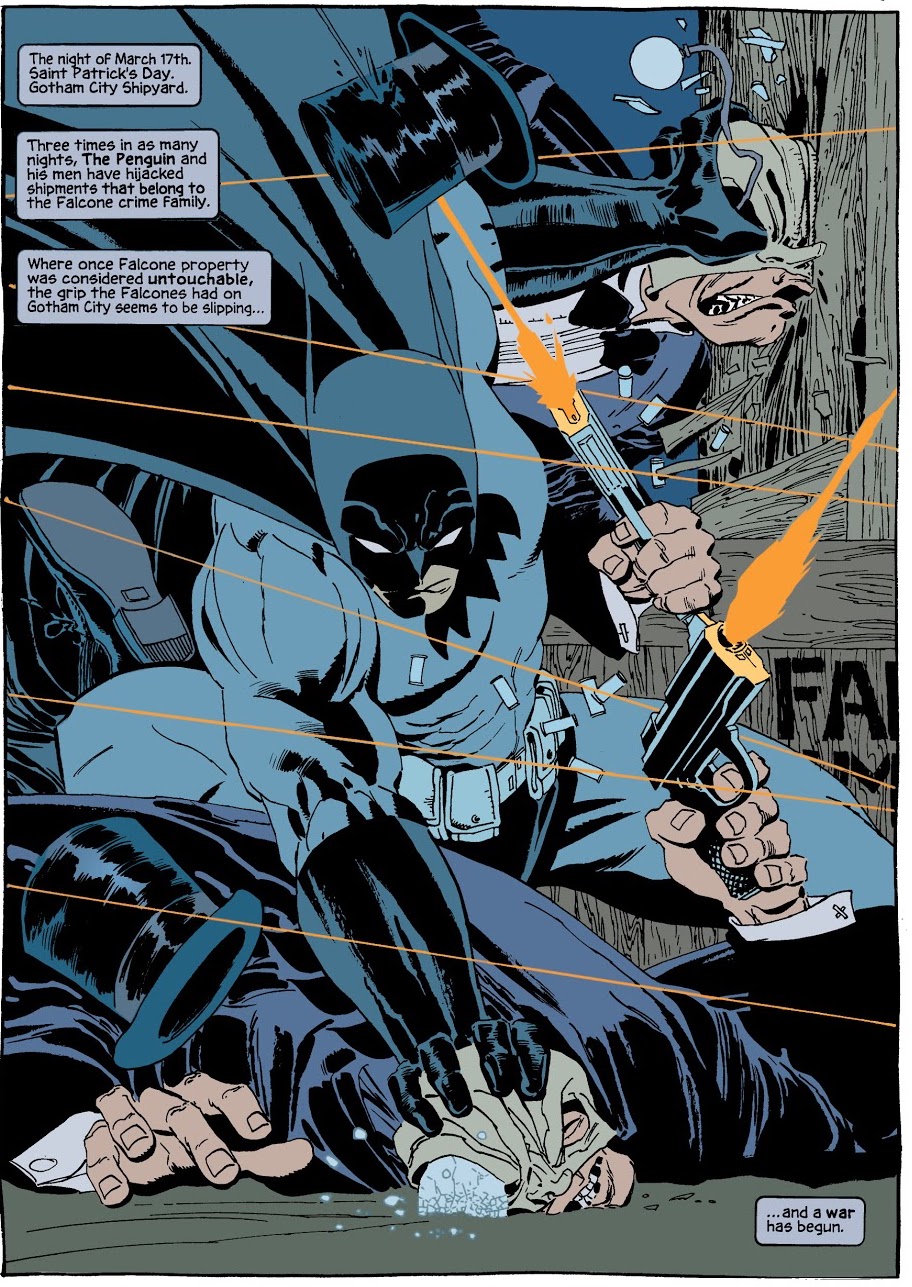 Batman notices how the Falcone Crime Family is weakening their hold on Gotham.

Skeevers gets shot in the leg, while duelling with Penguin’s henchmen. This causes Zucco to reveal that he has a new plan for shipping illegal goods in. This battle at the shipping yards just proves how Gotham is transitioning to new super-criminal techniques that forces the older crime families to adopt. 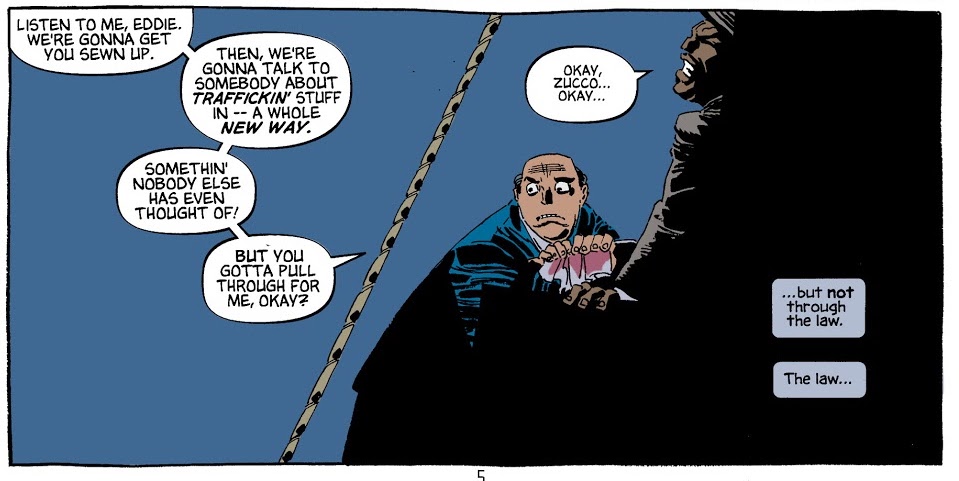 In retrospect, Zucco’s idea to adopt a new criminal venue is his realization and acceptance to change. Ironically, Zucco’s plan is to hijack the circus, which eventually leads to the origin of Robin-hence enforcing the presence of superheroes and costumed criminals even moreso.

On the other side of the city, Commissioner Gordon assembles his crime squad to take down Two-Face and the Hangman. This is a good moment to showcase how artist Tim Sale creates distinctive faces for every new character. Look at the panels side-by-side. It has been said before, but no two faces look alike for Sale.

The Importance of Hope

An interesting character beat occurred between Gordon and the new recruit Lopez. When Gordon revealed the team was originally assembled to take down the Falcones, Lopez firmly asserts, “We still can, sir.” 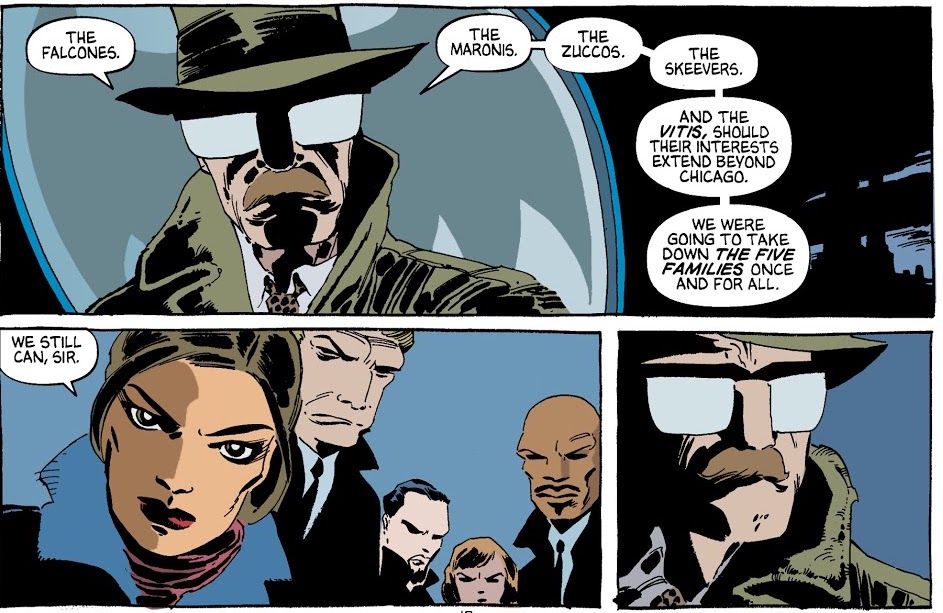 Lopez introduces a sense of hope in Gordon’s mission.

Here, we are introduced to the theme of hope in Dark Victory. Hope is ultimately what turns Batman around from being an isolationist, creature of vengeance to ultimately a hero for change. The last time Batman felt hope was when Harvey Dent, Gordon, and him banded together to take down the Falcone empire. Unfortunately, by the end of The Long Halloween, Batman’s hope twisted into distrust, due to Dent’s betrayal.

Interestingly, the only time Batman expresses hope in Dark Victory is in the possibility that Two-Face may turn good again. In Batman’s world, hope is a complicated concept. It can be a means of motivation or a cruel torture device. This theme is best expressed in Bane’s monologue in The Dark Knight Rises.

While Zucco is an example of a mobster who accepts change, Sofia “Gigante” Falcone is an example of being resistant to change. She comes to her penthouse suite to find the doors bolted. Even more surprising, Sofia discovers that it is her brother Mario Falcone who locked her out. He took control of all of Falcone Imports’ legal assets, including the penthouse and the name “Falcone”. Mario declares to Sofia that Gotham does not tolerate mobsters like her anymore. 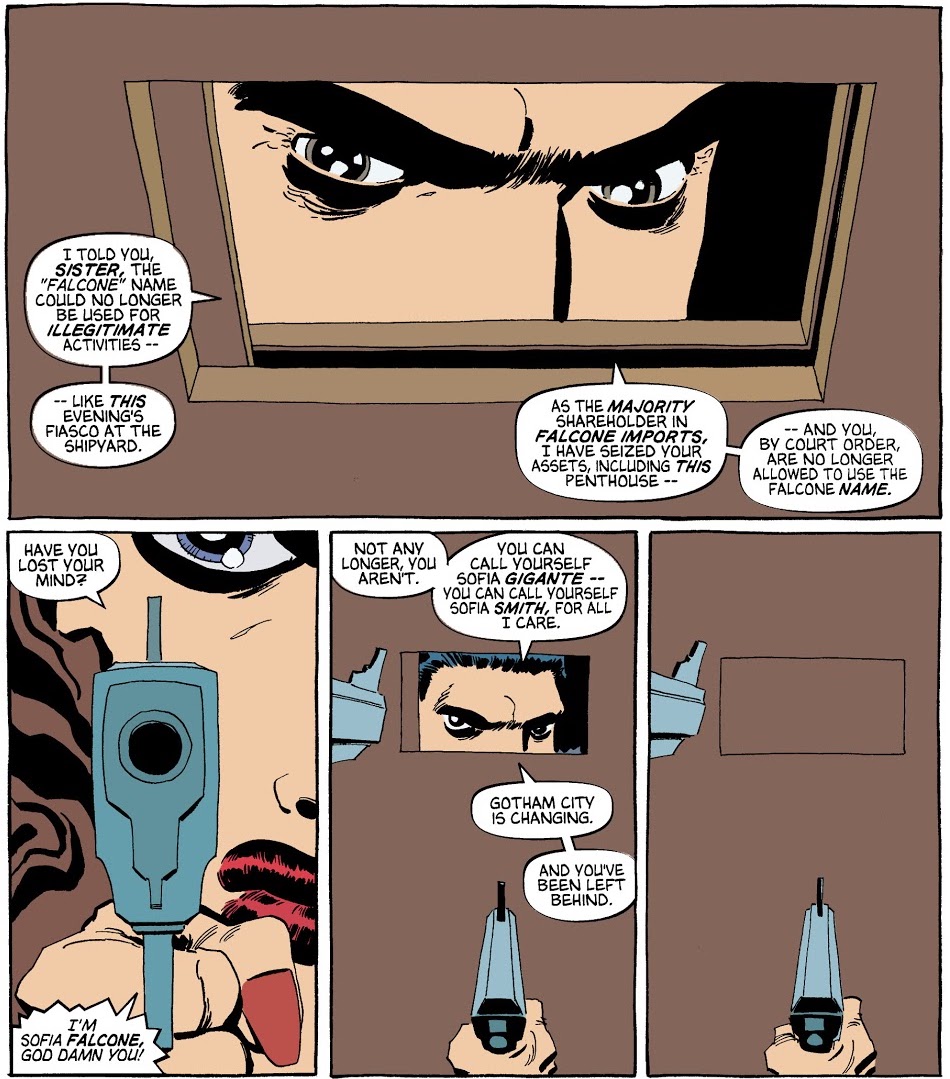 Mario literally cuts himself off from Sofia, thus isolating her.

It is another stinging reminder how Gotham is leaving old crime families behind. Even Sofia’s own name- her source of identity and pride-is stripped away from her. In this sense, Sofia now feels alone, without even the comfort of her family name to help her. This is a far cry from the beginning of Dark Victory where Sofia proudly proclaims that the Falcone family will hold together forever.

At her father’s funeral, Sofia proclaims how the Falcones will remain strong together- an ironic statement in retrospect.

However, Mario was not working alone. A shadowy figure from the balcony instructed Mario to take all of Sofia’s assets to put pressure on her.

Meanwhile, the Joker and Two-Face butt heads, only for Two-Face to pistol whip the Joker. While beating on the Joker, Two-Face makes it clear that the Joker is up against a full-blown super-villain and not some wimpy DA who he can bully. 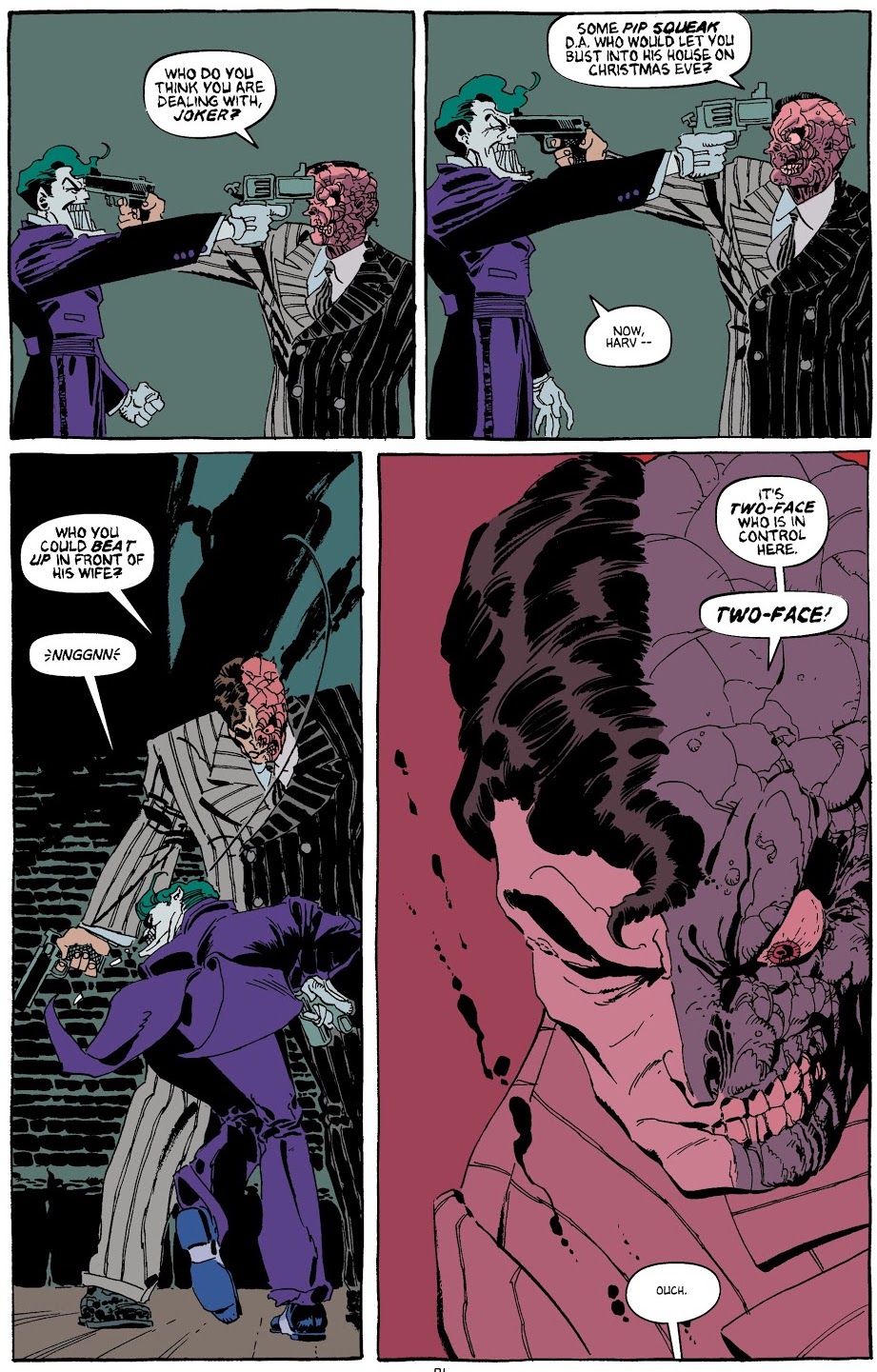 Two-Face beats on the Joker- a reversal of power.

This scene is an example of a reversal of power. In TLH, Joker breaks into Dent’s home and beats him up. But now Two-Face has no qualms about being violent. He catches the Joker off-guard and beats him. The beat-down is an inverted callback to TLH.

The Curious Case of Officer Merkel

At a police bar, Gordon, Barbara Gordon, and DA Janice Porter meet up with Watch Commander Stan Merkel. Merkel is a character with an odd comic book history. He was first introduced in Frank Miller’s The Dark Knight Returns and then subsequently in Year One. But despite his role in those stories, his face was always in the shadows, or cut off the comic panel. 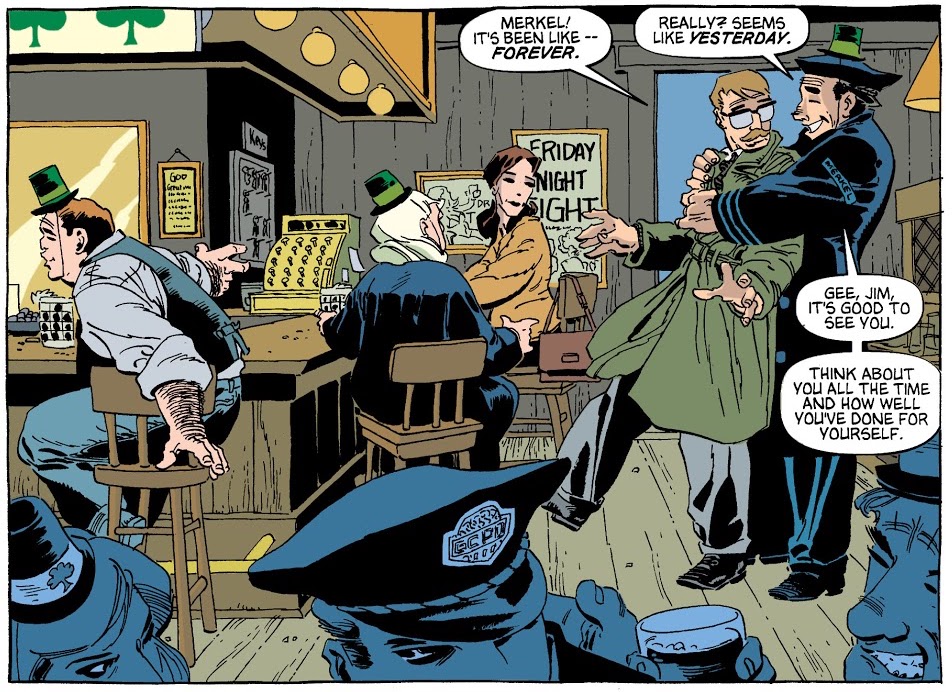 Don’t get too attached to Merkel.

Even more interesting, writer Jeph Loeb introduces Merkel into mainstream continuity only to have him killed off by the Hangman by the issue’s end. Merkel was hanged behind the Dents’ old home. The house deed is pinned to his body. Unfortunately, Batman investigates Merkel’s body at the same time the police arrive to capture him. On a meta level, Merkel’s death is an indicator that Dark Knight Returns is out-of-continuity with mainstream canon. 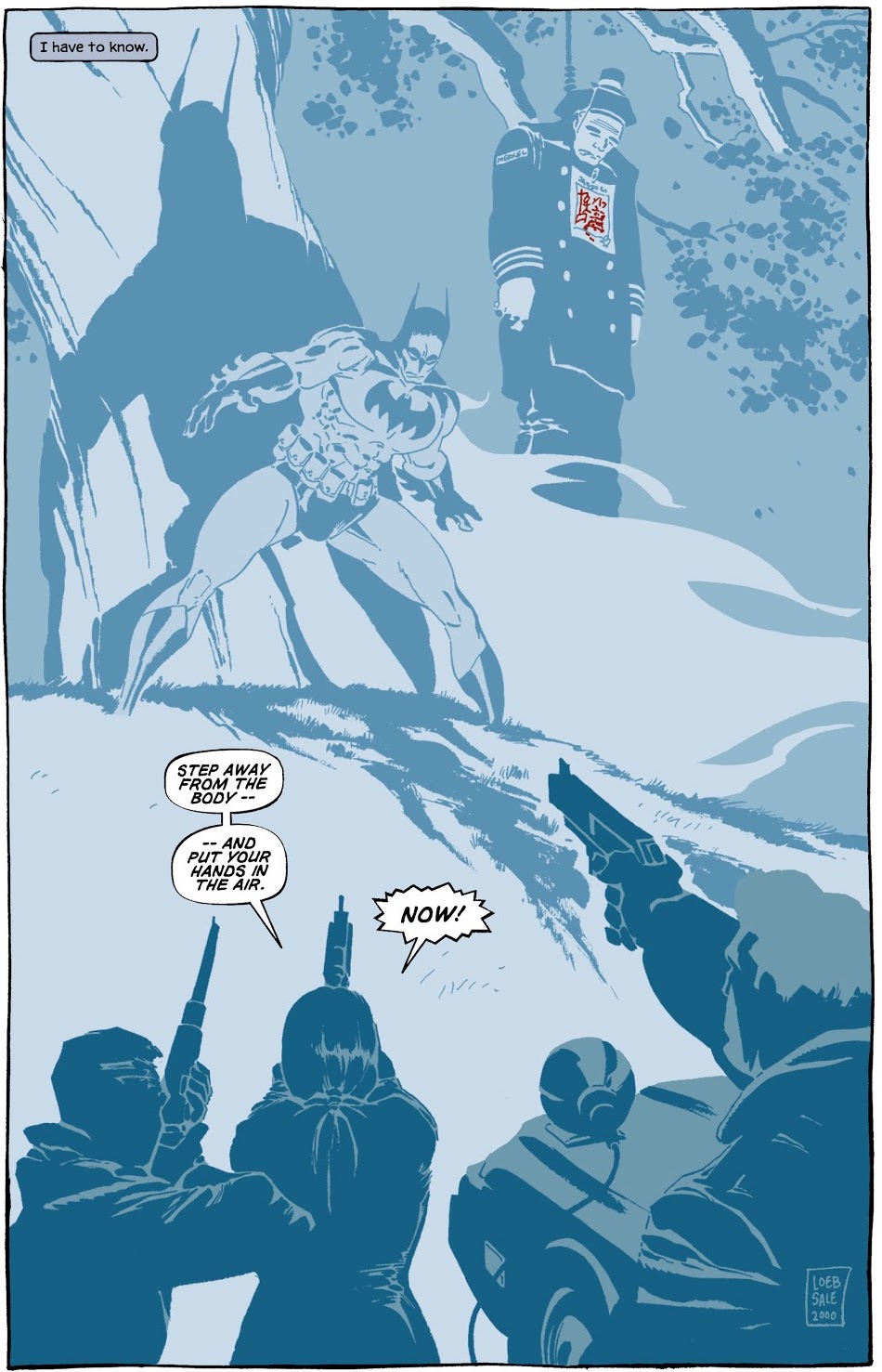 Batman is caught along with Merkel’s body.

This chapter gives a real-forward momentum in the plot. At this point, each Dark Victory has found the formula to drive an engaging narrative, while sprinkling enough future teases and character beats to keep it fresh. Loeb and Sale are in their prime.

‘Shazam!’ Producer Explains That James Gunn Will Work on ‘The Suicide Squad’ First And It Will be a Reboot