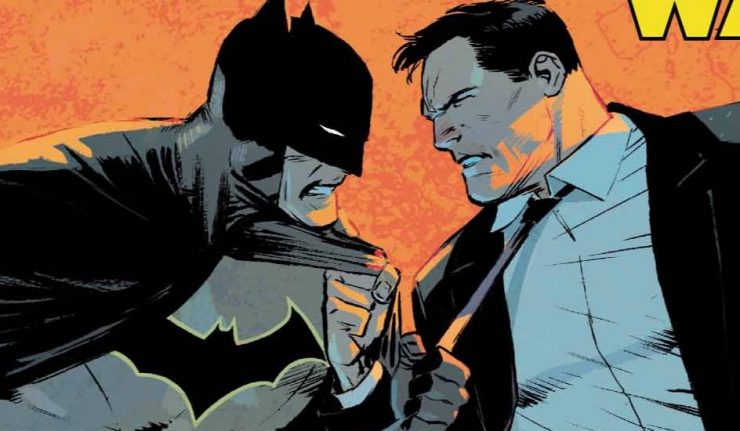 On Twitter, King responded to a fan question about potential plans for Batman #75. King teased that the issue will be oversized and that it will kickstart a new event story. Furthermore, it will be drawn by Tony Daniel and be a culmination of other DC Comics stories.

It’s drawn by @TonyDanielx2, it’s oversized, it kicks off a huge event, it’s an essential part of a culmination of DCU stories, it’s the pay off to the final, infamous page in Batman 50. As for Selina…

King’s tweet certainly leaves us a lot to unpack. Evidently, whatever happens, it heavily involves Catwoman. Also, what does he mean by it being an “Essential part of a culmination of DCU stories”? How does this all relate to Batman #50?

“The payoff” comment is probably the resolution to the conspiracy plot that Bane is masterminding against Batman. King has been building to a climax for months, so it’s logical that the ending could come in issue #75.

What about “A culmination of DCU stories”? What other DC superheroes storylines could possibly come into play in Batman? The most logical would be King’s Heroes in Crisis crossover. He’s writing it, and it heavily features Batman. It may be possible that the fallout from the Sanctuary massacre will play a part in Batman #75?

“Stories”, however, is plural, implying that other plots from other titles will be referenced. Perhaps there will be some callbacks to Scott Snyder’s Justice League run, or the Leviathan criminal organization from Brian Bendis’ Action Comics storyline.

Regardless, it will be interesting to see where King goes in his next big Batman story arc.