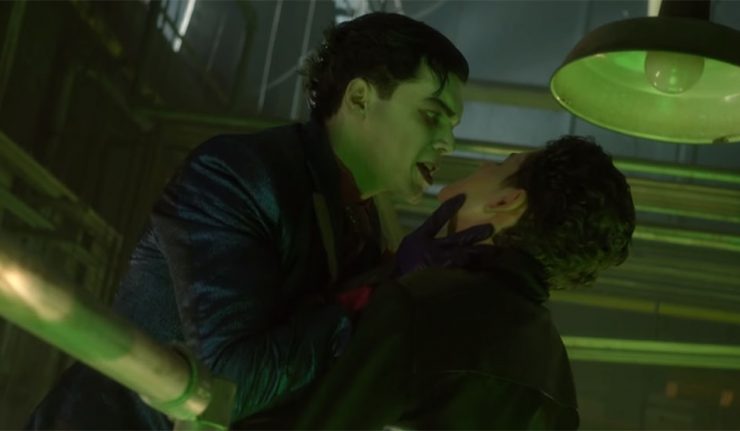 The Fox marketing team is inconsistent. It seems their attempts at hyping things up are fairly hit or miss. I’ve said it countless times: the Gotham promotional photos that are sent out every week often tend to be photos of the actors simply emoting. Good for their portfolios, boring for fans to look at when awaiting the next episode.

Then, there are those times when the team really gets to dig their claws in and make something special, usually done with trailers. An effective Gotham trailer usually both acknowledges longtime Batfans and teases us with thing we want to see. Oftentimes, those trailers are centered around Jerome/Jeremiah because… well, he’s their Joker and they clearly save the best stuff for him. I mean, remember the Jerome White Band Trailer? The one that re-enacted the Dark Knight Returns chase sequence in the Hall of Mirrors? Definitely one of the high points in Gotham‘s marketing.

Without me, you’re just a joke without a punchline

A couple days ago, we received another high point. A new trailer was released that is sure to tantalize most longtime Batfans. This new teaser promotes episode 7 entitled, “Ace Chemicals.” One of the most iconic locations in the Batman mythos is finally making its way to Gotham, along with the confrontation we’ve all been dying to see.

Last week, the sick and twisted Jeremiah set up a rather cruel scenario for Bruce. The villain kidnapped Alfred to lure Bruce back to Wayne Manor, where he sees a man and a woman who claim to be his parents. Jeremiah’s obsession with Bruce seems to have reached a fever pitch. The trailer shows us just how elaborate this plot really is. (The mock version of Mark of Zorro gave me goosebumps.)

No seeming endgame. No attempt at his life. Everything’s there solely to torture Bruce, mentally rather than physically… just to prove a point. It’s absolutely nuts and so Joker. This will ultimately lead both protagonists to Ace Chemicals, where presumably Valeska falls into the vat of acid, to complete his transformation into the Joker.

While this is definitely one of the best trailers yet, I’m still left with several questions. Falling into the vat of acid was what bleached his skin, dyed his hair, and turned him into the Joker. However, it seems that Jeremiah already has bleached skin and dyed hair courtesy of Jerome and with the damaged psyche to boot. With all of that taken into account, how is he NOT already the Joker?

Honestly, he’s the Joker and the crew can’t tell me otherwise. At this point, a leisurely dip at Ace Chemicals is simply fan service as far as I’m concerned. 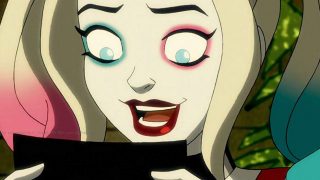