“The Girl Who Fell From the Sky” 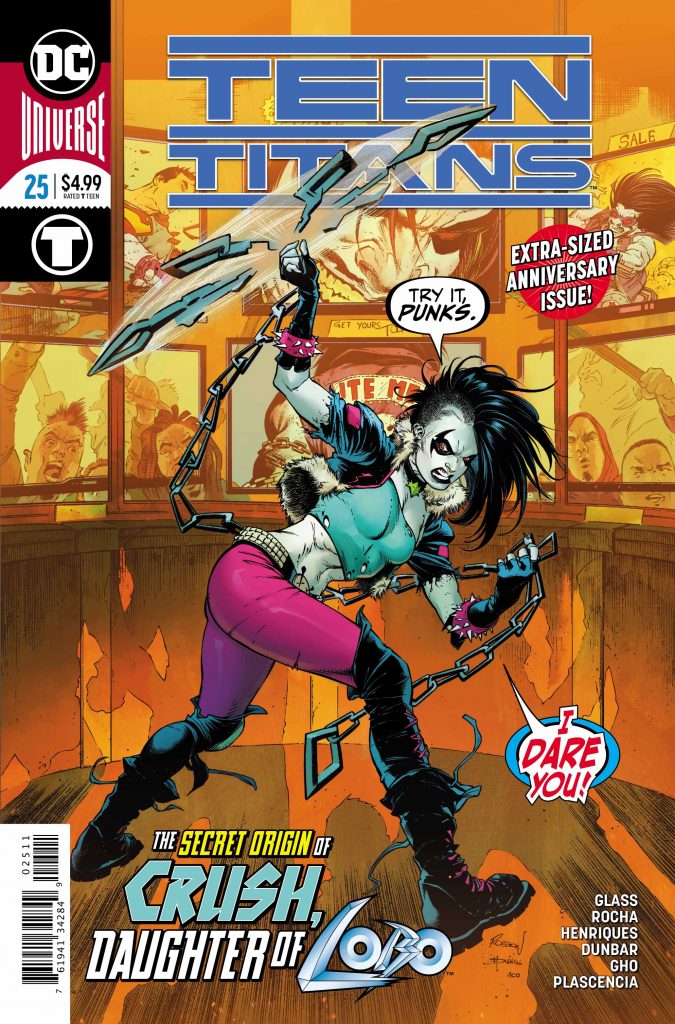 Adam Glass has focused this “extra-sized” anniversary issue on Crush. Here, the writer took a much-needed detour from the regular, full team story to add depth to a fairly unknown character. Not only did the story develop Crush’s origin, but it also charted a course for her to reconnect with an important part of her past.

To understand Crush, one must imagine growing up idolizing Superman and discovering the sinister Lobo is your father?! Consistently, to become and stay a hero, Crush must fight her killer instincts. Additionally, we learned Crush had to overcome the poor life choices of her adoptive parents. Suffice it to say her upbringing was anything but the Kent Farm.

In a past issue, Robin gave Crush a set of coordinates, with which she quickly discerned what awaited her. Crush and Djinn set out on a rebellious adventure to reclaim “Obelus” – her dark, protective chains. Djinn was the perfect companion on Crush’s journey. Naive and yet wise, Djinn was able to connect the dots of Crush’s past and influence the decisions of her present. It was a beautiful and intricately woven tale.

Teen Titans #25 had an interesting pace as it swayed between past and present. As Crush recounted her origin story to Djinn it seemed cathartic. She seemed able to come to terms with her identity. All the while she wrestled with what it means to be a hero despite her father’s depravity. As a reader, Crush’s character reached new depths. In one issue, a once annoying addition to the Teen Titans has become a more relatable and likeable character. 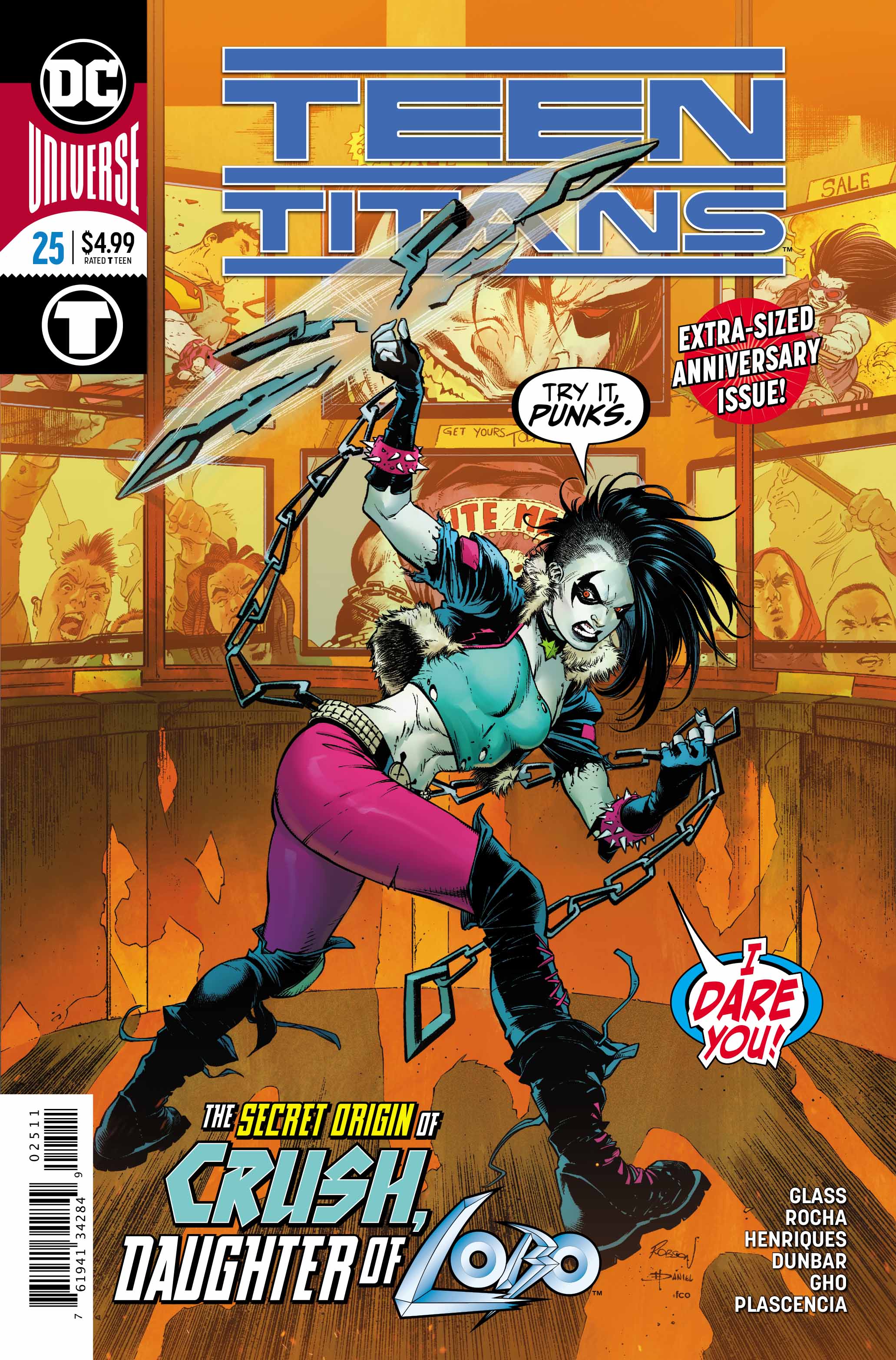 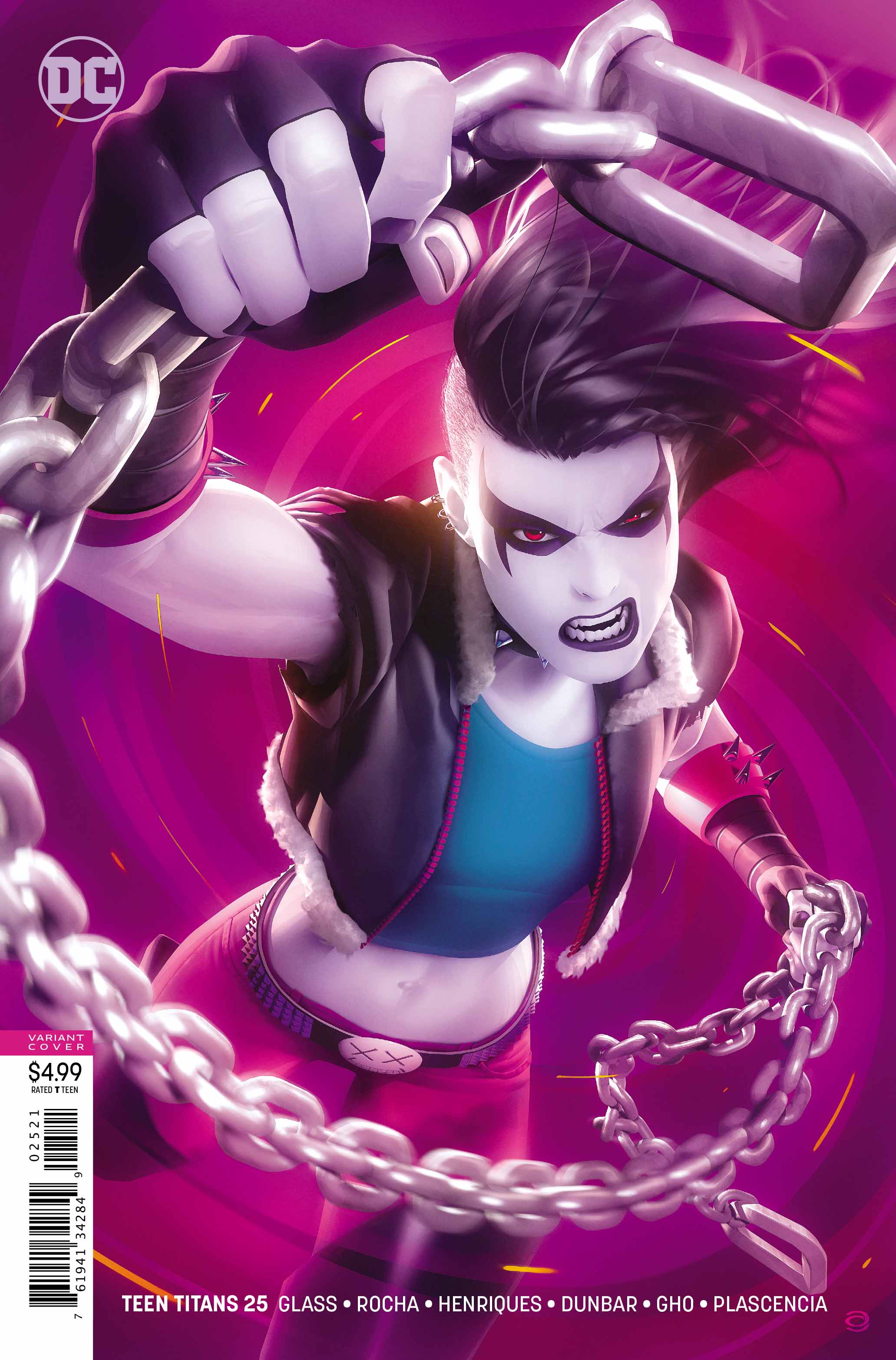 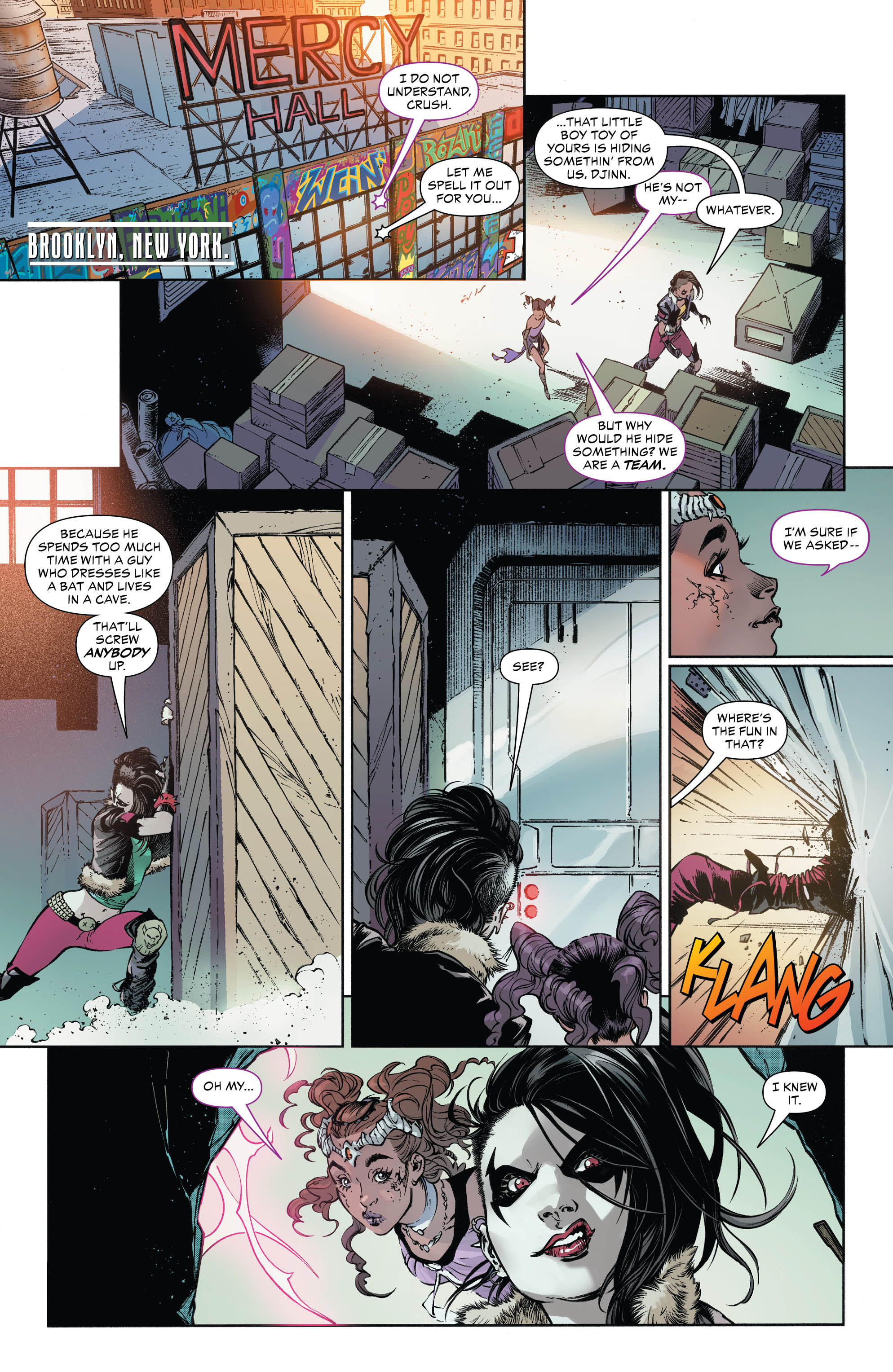 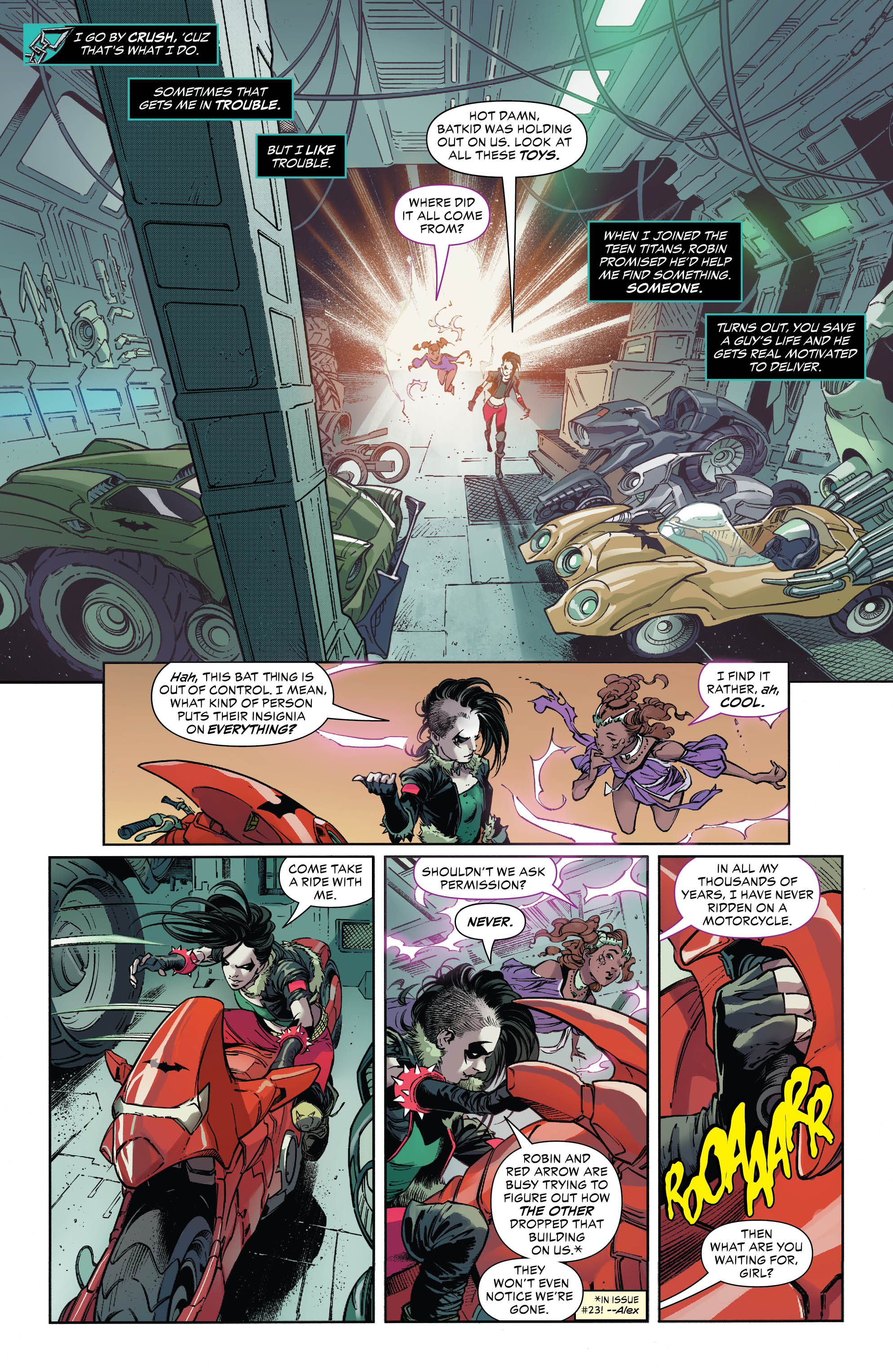 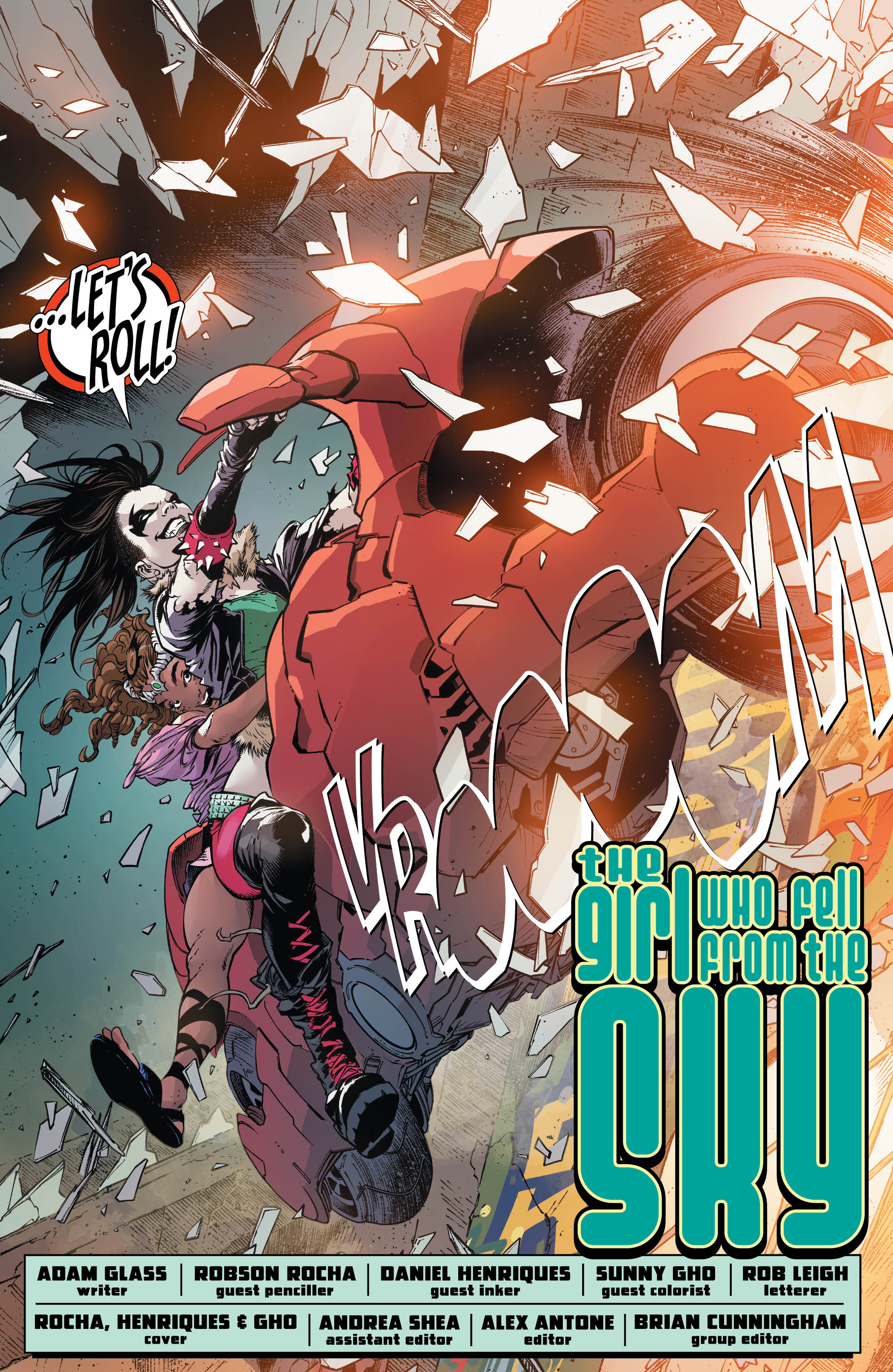 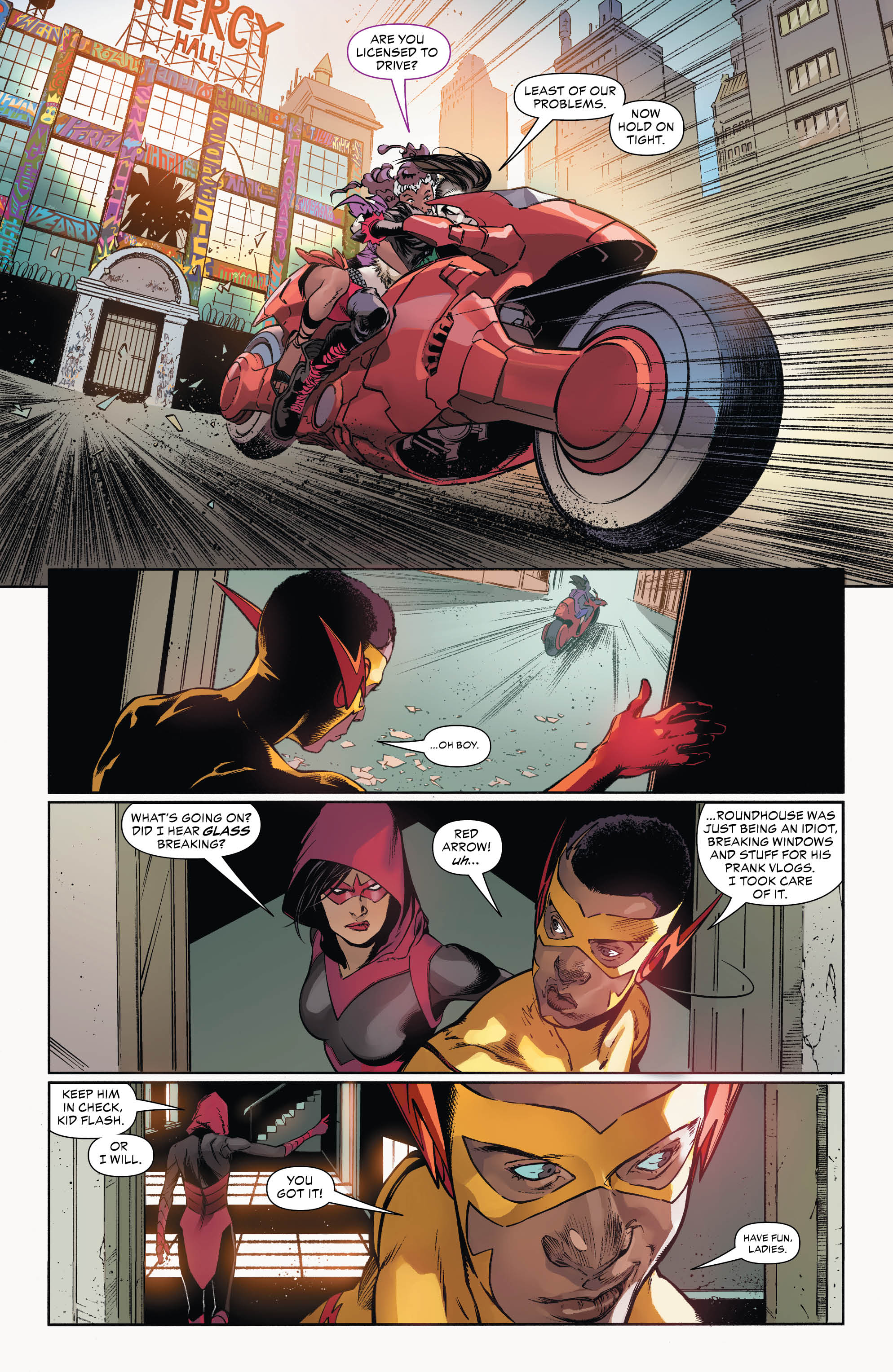 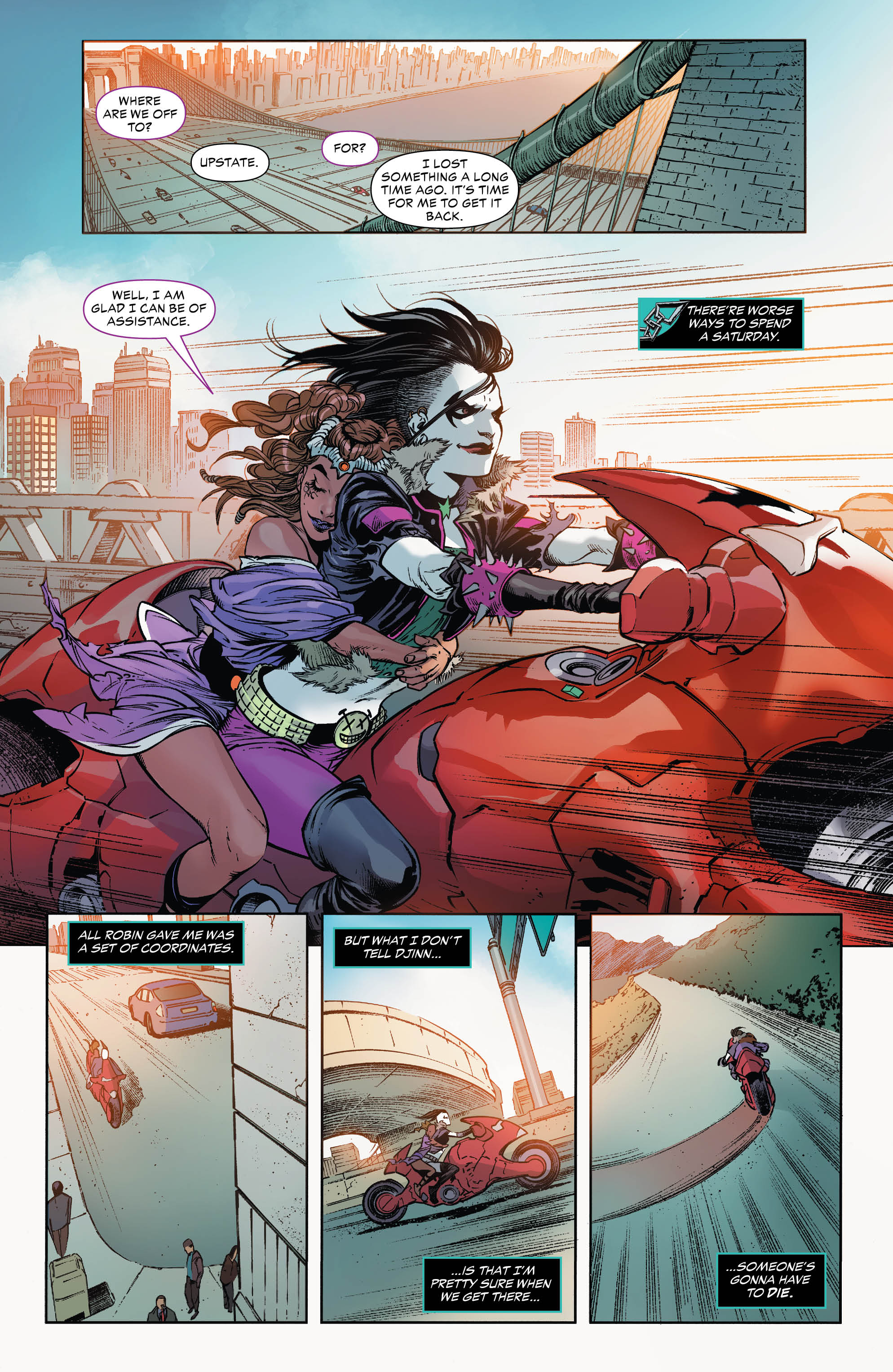 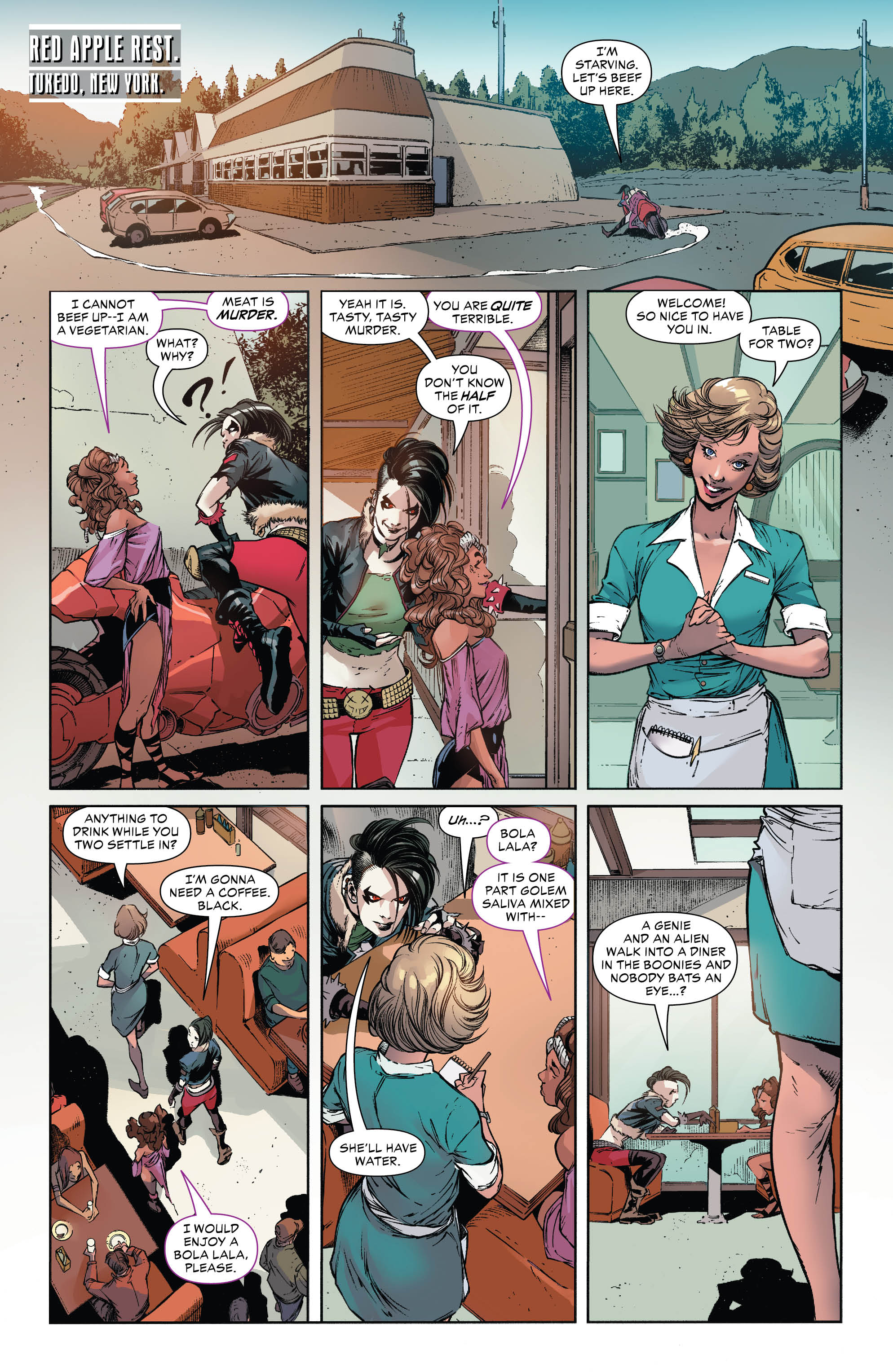 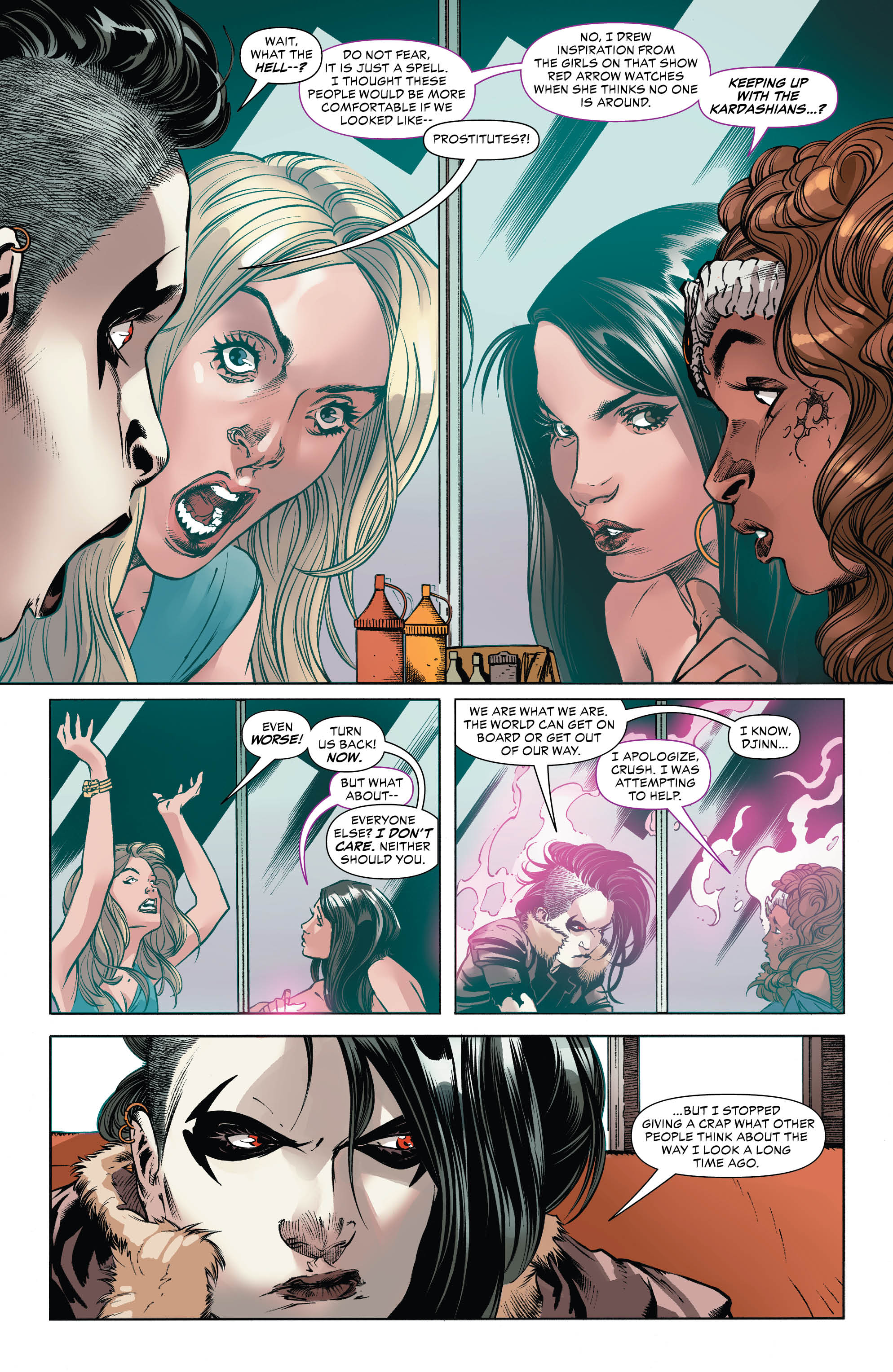 The additional portion of the issue fills-in the narrative gap between Roundhouse’s nuclear hero work and his reunion with the Teen Titans. In a story titled, “The Same Old Ground,” author Adam Glass teams with artist Max Dunbar to tells a humorous, yet poignant tale of Roundhouse’s journey home. The narrative was creatively used to mysteriously include a relative who guided his journey. Was the relative really there? Were they a figment of his imagination? These questions are left to the reader’s imagination – a beautiful device that added depth to a potentially throw-away tale.

Artistically, Teen Titans #25 was beautiful. Despite being a past/present tale, it included tons of movement and action. The panels captured and guided readers’ attention easily and swiftly through the pages. Fine lines depicted movement as well as background settings. The colors blended well. Lights and darks were well rendered and added layers to the panels. Readers even got to see Superman and Lobo on a television screen! Overall, the art was superb. Well done!

Teen Titans #25 was a surprisingly emotional issue. Despite Crush’s hardened exterior, she boasts a soft heart and a disturbing background. Knowing more about her origin, it’s not surprising she uses her gruff demeanour as a defence mechanism. Like most heroes, her upbringing played a pivotal role in the type of hero she’s become.

It will be interesting to see how Crush and Djinn’s relationship develops following this adventure. It also remains to be seen how the addition of Obelus will increase or inhibit Crush’s power and capacity for her heroic work.