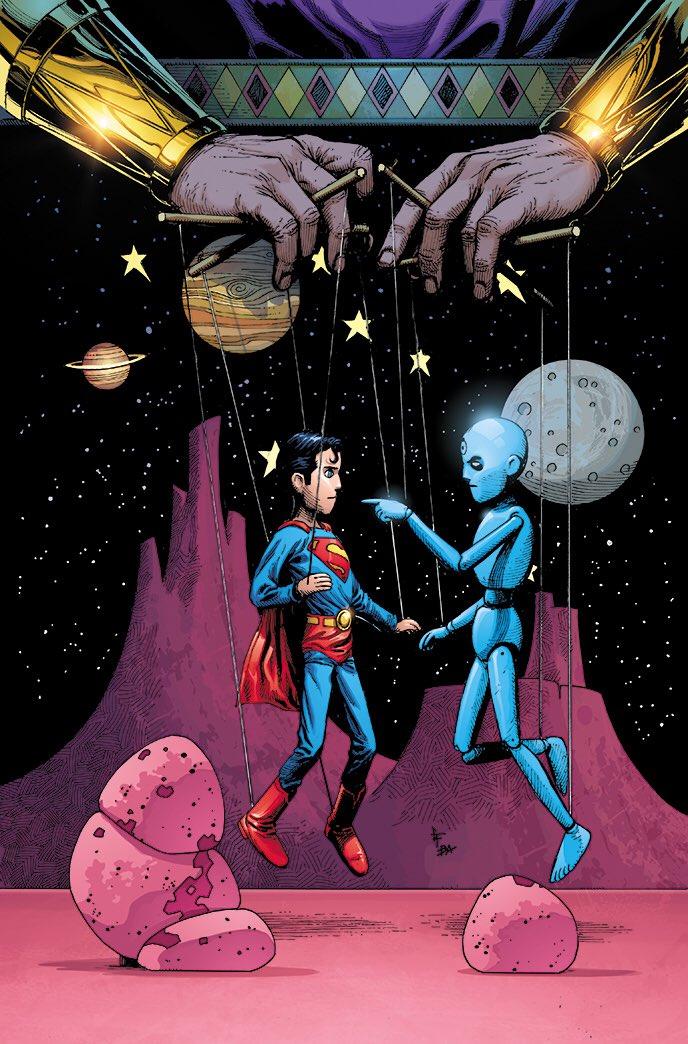 Russia and the United States of America are on the verge of war. Are metahumans being manufactured as part of a new arms race? Doctor Manhattan has been manipulating the history and timelines of the DC Universe, causing Ozymandias and the new Rorschach to leave their Earth to go and find him. Do Earth’s heroes know the truth? Can Superman save humanity? Should he even get involved?

This series is asking some very hard questions.

Geoff Johns has always been a divisive writer. I have been a fan of the majority of what he’s done for DC Comics, but not everything. I’ve gone on record in the past, saying that Watchmen should have been left alone, and never be given a sequel. When I first heard that Johns would be doing just that, I was shocked.

Eight issues into the milestone series and I’m still shocked… at just how damn good it is. 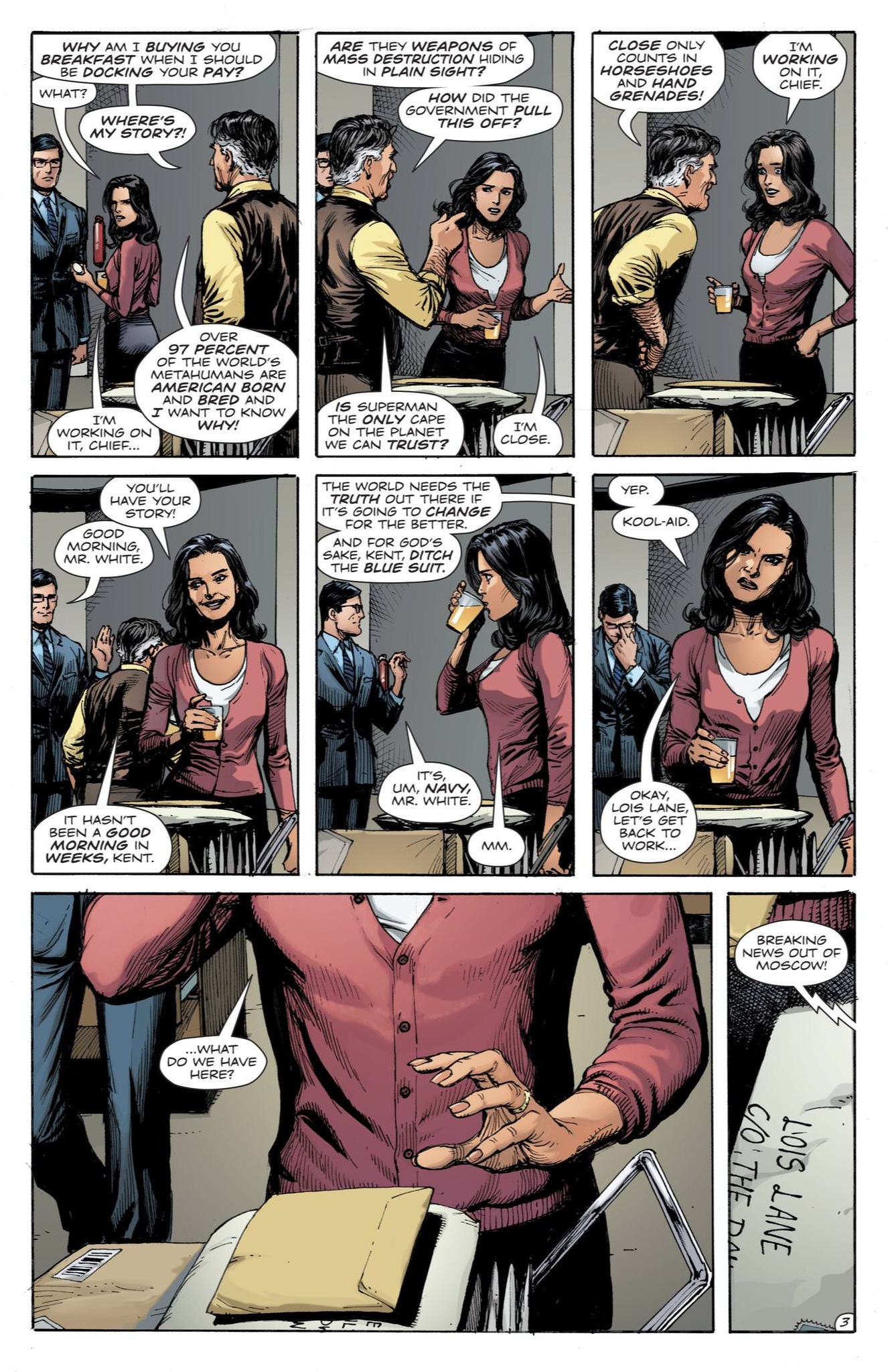 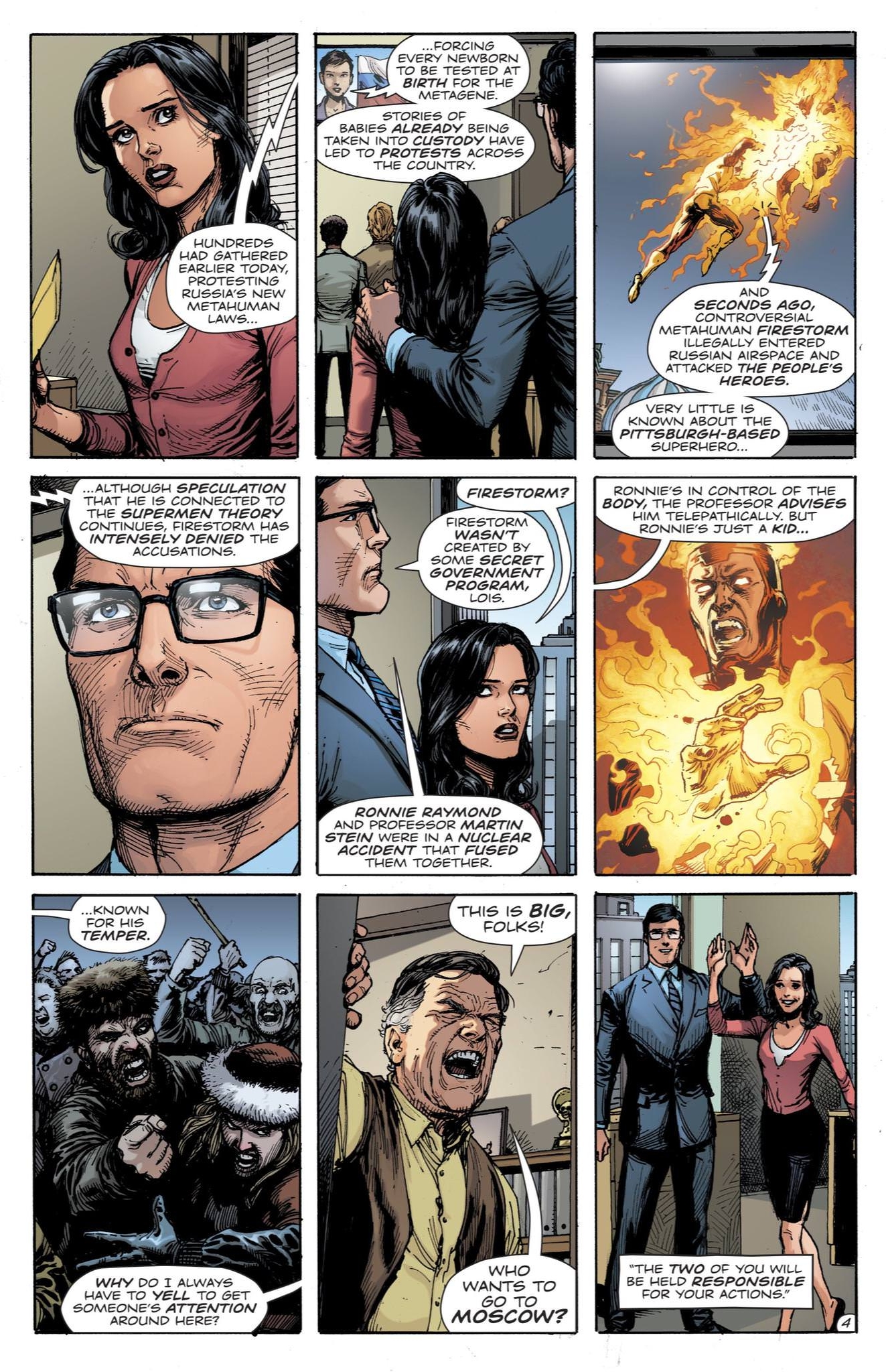 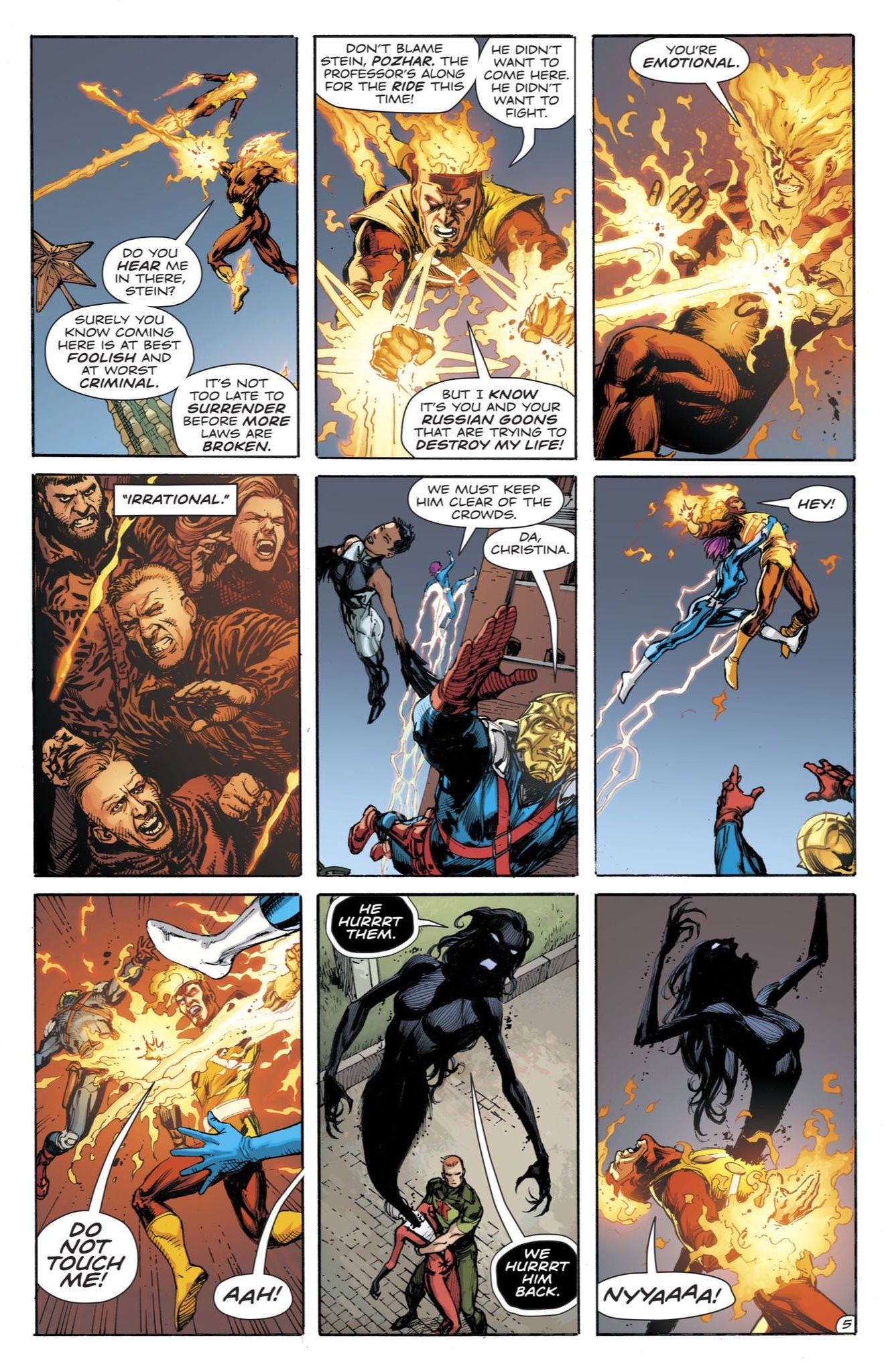 Super Powers and the Superpowers

When the Cold War ended the arms race ceased, at least on our world. The DC Universe, however, is populated by living, breathing weapons of mass destruction. In the original Watchmen, writer Alan Moore used the threat of nuclear armageddon to instil a sense of impending doom. This was also the catalyst for Ozymandias stepping in, to save humanity by any means necessary, whatever the cost. Johns is using civil unrest and the world’s mistrust of superheroes to create similar tension in this story.

I’ve read this comic six times since receiving it last Friday, and it’s still got my head and my heart in turmoil.

I always wondered what part Superman would have to play in this story. This issue has answered that question, but it’s not the answer I wanted, nor expected.

Superman stands for hope; he is the hero that is loved and trusted by every people of every nation. This has possibly never been made more evident than it has in this very issue. What happens when that trust is lost, and the world loses faith in its greatest hero? Superman has never taken sides in global conflicts, so what happens when people believe that he has? How does a world react when the man that stood for all of us suddenly seems like he doesn’t any more? 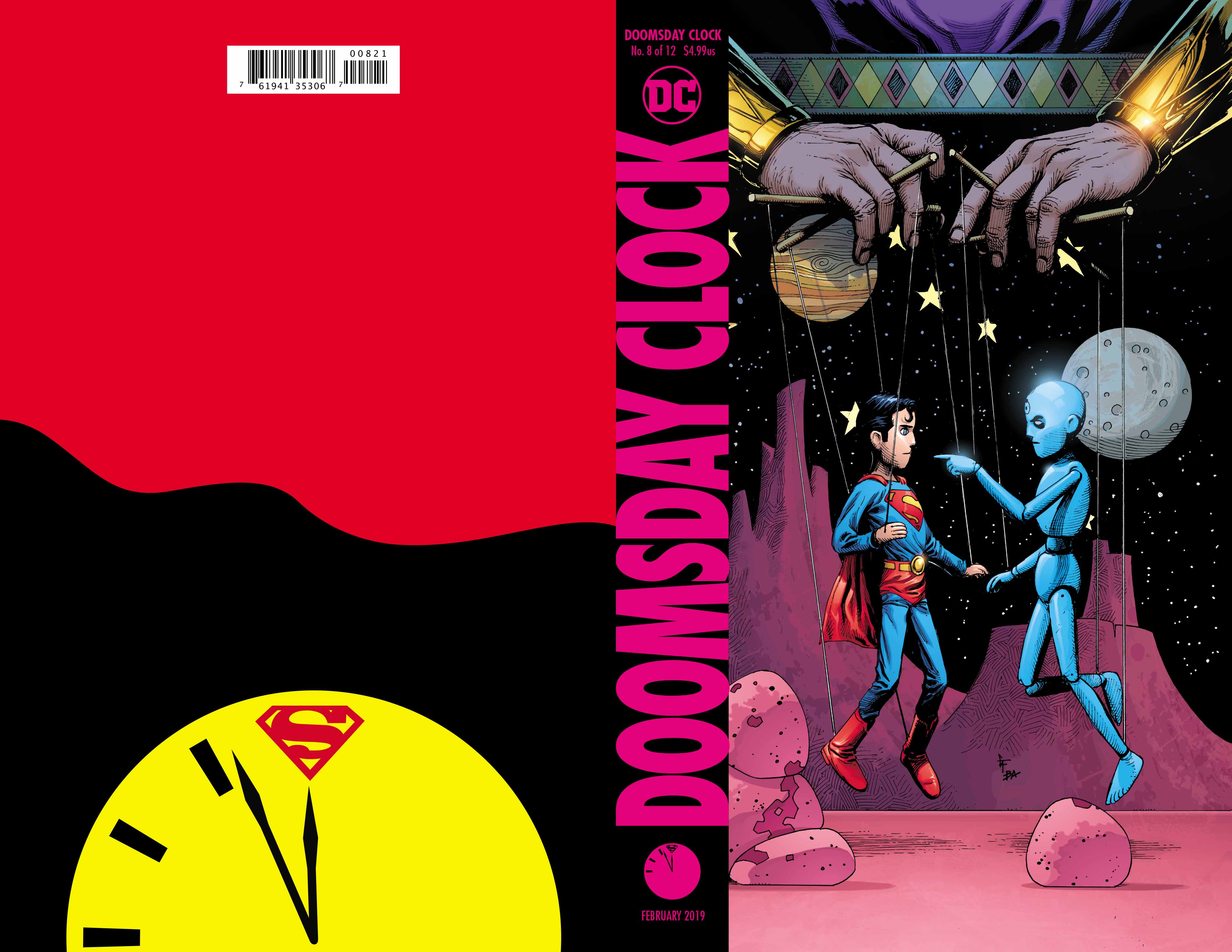 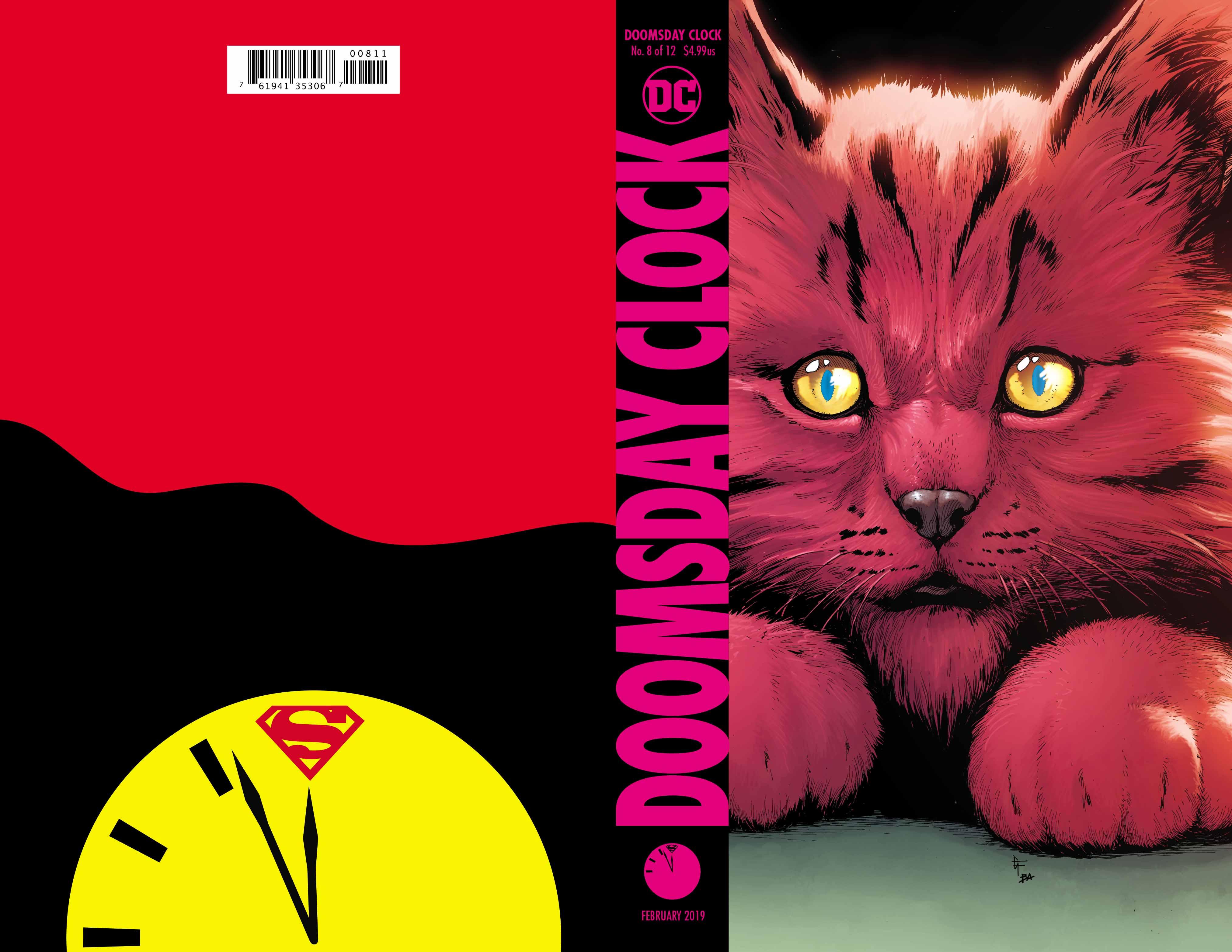 Save Humanity… destroy the world?

The alternate cover depicting Doctor Manhattan and the Man of Steel as puppets is a poignant one indeed. The use of puppets throughout this series has been disturbing, yet effective. Manhattan himself seems to have been pulling strings all over the DC Universe, and many see Superman as a puppet of the U.S. government. In Watchmen Doctor Manhattan famously says that all of us are puppets, but he’s just fortunate enough to see the strings.

Gary Franks’ art is the icing on the cake. The line-work he frequently posts on social media is sublime, and the finished product is elevated to even greater heights by color artist par-excellence, Brad Anderson. The amount of emotional punch that the visuals add to the story cannot be understated.

Other than Tim Sale I can’t think of many artists that can make every character instantly recognisable, or visually distinctive the way Gary Frank does. From his sinewy, yet still gorgeous Lois Lane, his nerdy but instantly recognisable Jimmy Olsen, to his incredibly Christopher Reeve-esque Superman. Even his background characters, news readers, soldiers and reporters, have their own faces and personalities.

His detail and his action sequences are comics gold. Look at every face on the three pages attached above, then go out and buy this issue to witness a man going Nuclear, another going Bats, the King of Kahndaq, a picture perfect Putin, and the People’s Heroes.

There’s so much more I want to say about this issue, but it’s all so spoilerific that I’m fighting every instinct and holding back. I don’t like it when comics feature real-world figures, as I feel their inclusion could make the story feel dated in years to come, but that’s one tiny negative against what is an emotional powerhouse of a comic-book.

The ventilation unit has been activated and is spinning at full whack. A tractor trailer full of manure is backing up towards it…