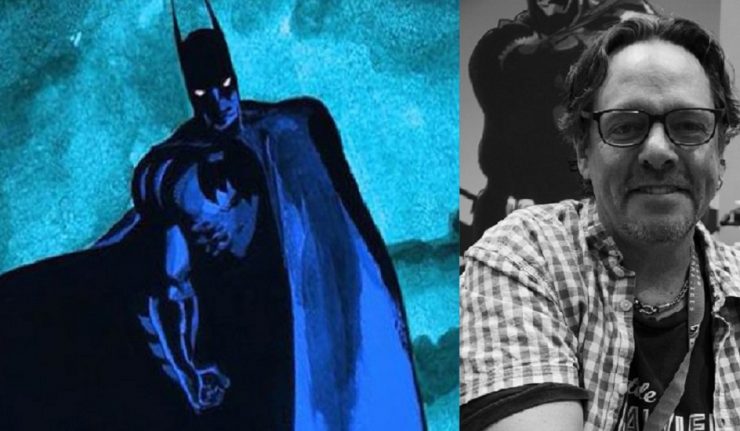 Tim Sale is an Eisner Award-winning artist. He’s drawn Deathblow for Image Comics and, along with long time collaborator Jeph Loeb, many noteworthy Marvel graphic novels, featuring some of their greatest characters.

His credits for DC Comics are simply legendary: Batman: Haunted Knight, Batman: The Long Halloween, Batman: Dark Victory, Superman For All Seasons, Catwoman: When In Rome, and Superman: Kryptonite.

His art was also prominently featured on the hit NBC series Heroes.

If you’ve never read any of his Batman work for DC Comics, they are about to publish an omnibus collecting all his stories with Jeph Loeb.

Tim recently attended the MCM Comic Con in my home town of London. He isn’t just an incredible artist, he is a hardworking and inspirational human being, who has persevered through adversity, and reached the very top of the comics mountain. Hey, don’t take my word for it! Read on, and find out for yourself. 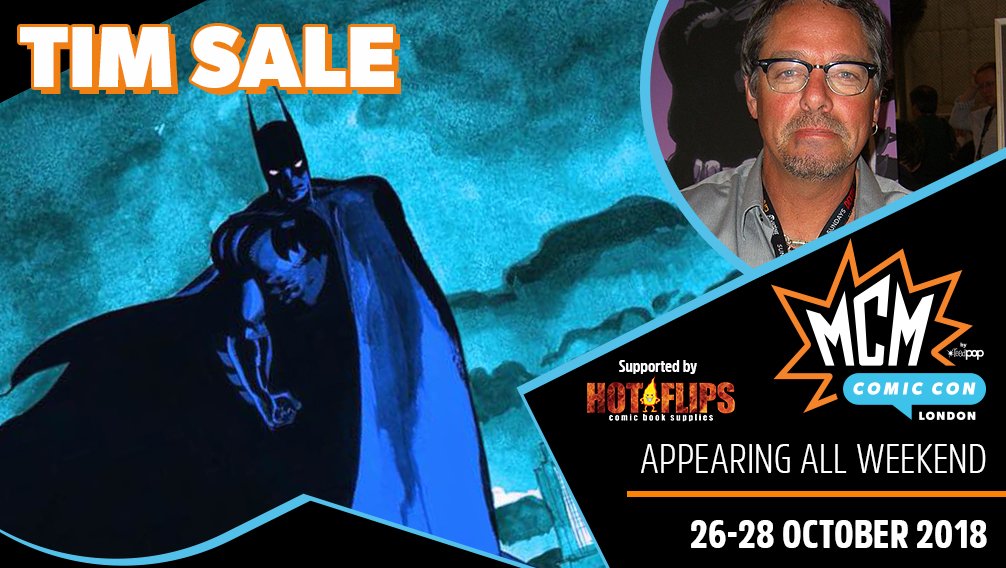 When I was six we moved from the East Coast to the West Coast; from Amherst Massachusetts to Seattle. It took about three weeks to get across. I was six, my sister was three, mom and dad… I was beginning to learn how to read, and I learned from reading comics. My dad bought comics for me to amuse me in the car, where we had nothing to do otherwise.

It’s funny, as years later – probably when I was about 13 – I was really starting to get into comics, and I was a real Marvel zombie, just because back then I thought their art was a lot better. This was the mid-60s so, yes… that changed. I owe my career to DC really, but at that point that’s what really got me into (comics).

I was looking through a comic rack, and there was a double sized book, I don’t know what they were calling them. It was mostly reprints, and they reprinted Spider-Man Annual #2. I started flipping through it, and I realised that I’d read that in the car when I was six. It was intensely nostalgic, and it took me a while… “Why is it affecting me like this?” So that was my first experience with comics. It was really about 12, or 13 when I started getting really fanatical. 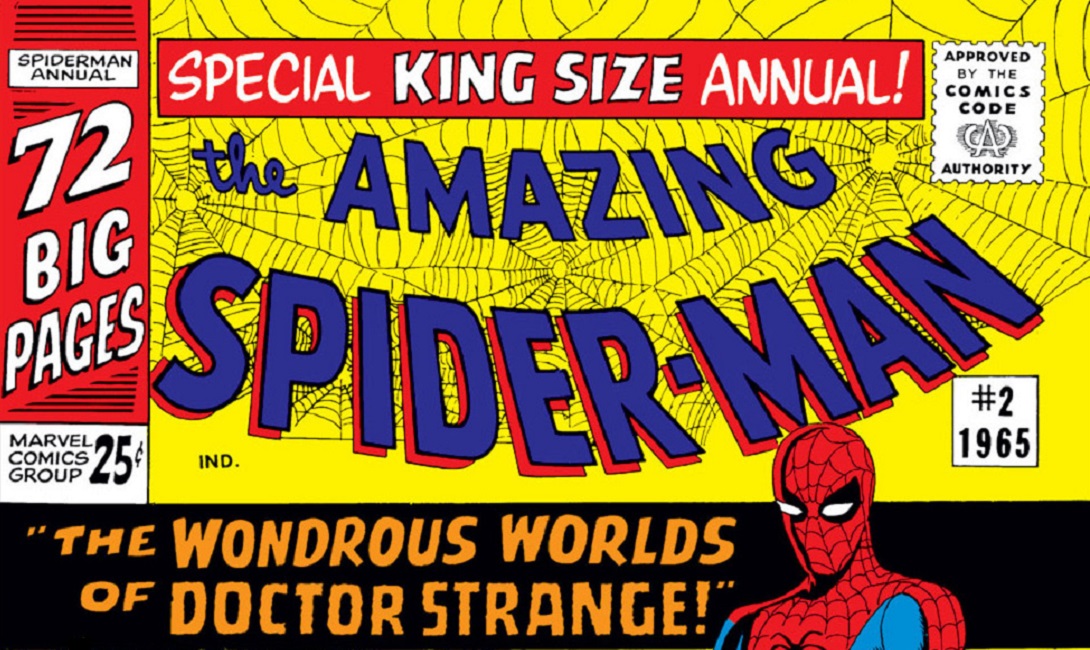 Formal education… and a startling discovery

I kept drawing – and it was all terrible – but people were encouraging me. It’s like writing music; starting with a blank page, people find it magic that you can do something with it, or you can just pluck music out of the air. That was always encouraging, and I always wanted to do it.

I was reading comics, and collecting comics – though not in the way people do now… I would just make a stack of the things – and I ended up doing two years at the University of Washington Art School. Mostly life drawing, which taught me an awful lot. I took painting once, I don’t even remember if I finished the course, and then I just dropped out. I did some – I’m sure they were terrible – paintings, and that’s where I learned I was colorblind.

I’m not alone; me, and (Alex) Toth and John Byrne. That was kind of freeing, actually. One of the wonderful things about comics is that you can make a living working in black and white, and never having to color. Toth is a huge influence on my work, and I wonder how much of that is just working with shape, as opposed to noodling, especially working with a lot of black. 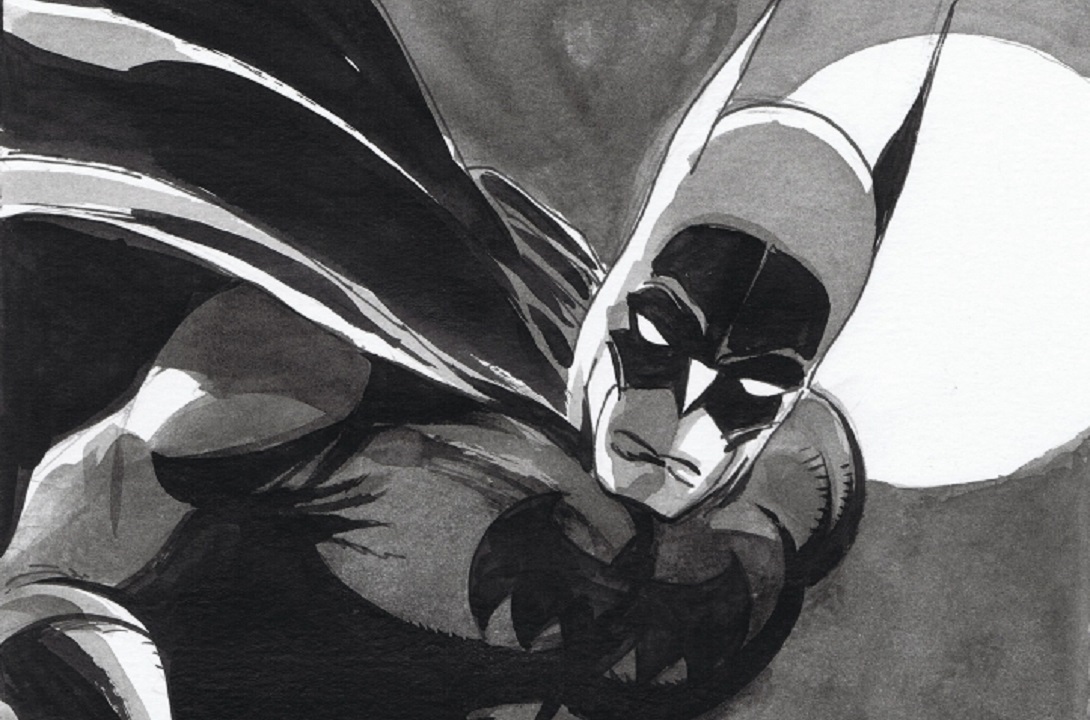 Getting into the business

I saw that John Buscema was advertising his workshop in the back of Marvel Comics. I graduated High School in ’74, so in ’76 I got into the workshop. It was Buscema, John Romita Sr. and Marie Severin. Buscema did anatomy, Romita taught inking and storytelling, and Severin did covers and also did storytelling. I was pretty confident, I knew I could draw pretty well, especially because of my college life-drawing. I’d never done life-drawing before, and working big was a real eye-opener for me.

I unfortunately came back to New York from Seattle thinking I just don’t know how to tell a story. On covers, I would be fine, but that panel, sequence… I don’t know where I’m going. I came away thinking, oh, I’m just going to try to be an inker, or something like that. My first job in comics, about ten years later, was inking.

During that time, and I was almost 30 at this point – this is in the 80s now in the black and white boom – where people were really experimental and stuff. Cerebus (Dave Sim’s classic monochrome comics series) was a really instrumental book for me. Dave wrote, pencilled, and inked a book pretty much a month, for the first, maybe forty issues of that series.

Suddenly I kind of figured it out. Still the drawing was crude, and it took another ten years of slogging away for that to get better. I don’t know what happened in the meantime, probably just growing up was part of it. I would continue to read, be a fan… that kind of stuff. 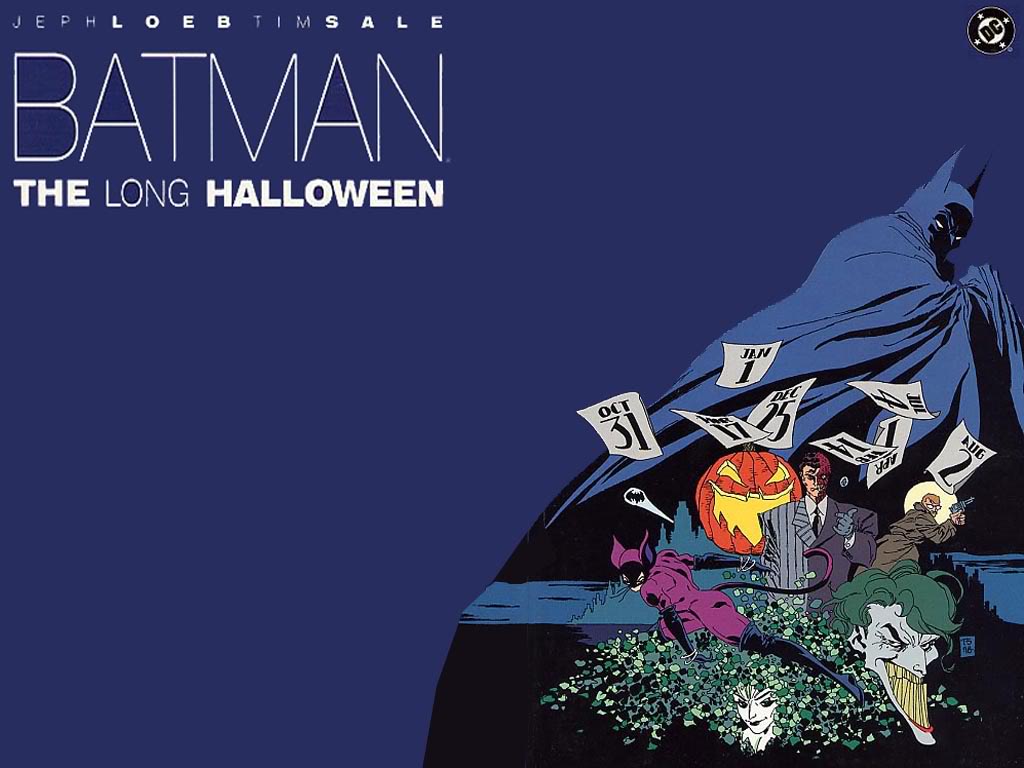 The Long Halloween, and other classics

I had always been told – John Romita Sr. told us this – you’ve got to be able to follow (a page) without any words. Just on a basic level. Establishing things; like if Superman’s going to jump out of a window, show the window earlier in the scene, and all that kind of stuff. So when I started working with Jeph (Loeb) he had never written a comic before – he was a movie and TV guy – he had to learn stuff like that, and he’d heard that also. We’re about the same age, I’m 62 and he’s 61, I think. That was a learning experience.

We started out really experimental, because that was Jeph wanted to do. Eventually we winnowed it down to basic storytelling.

People talk about it less than The Long Halloween – because that’s what people saw first – but the template is the same. There are certain spots where, when TLH came out, so many people couldn’t figure out the ending. I would always just repeat what Jeph kept on saying, that it’s all in there.

It’s been a wonderful ride, and I’m just really grateful that people dig it. 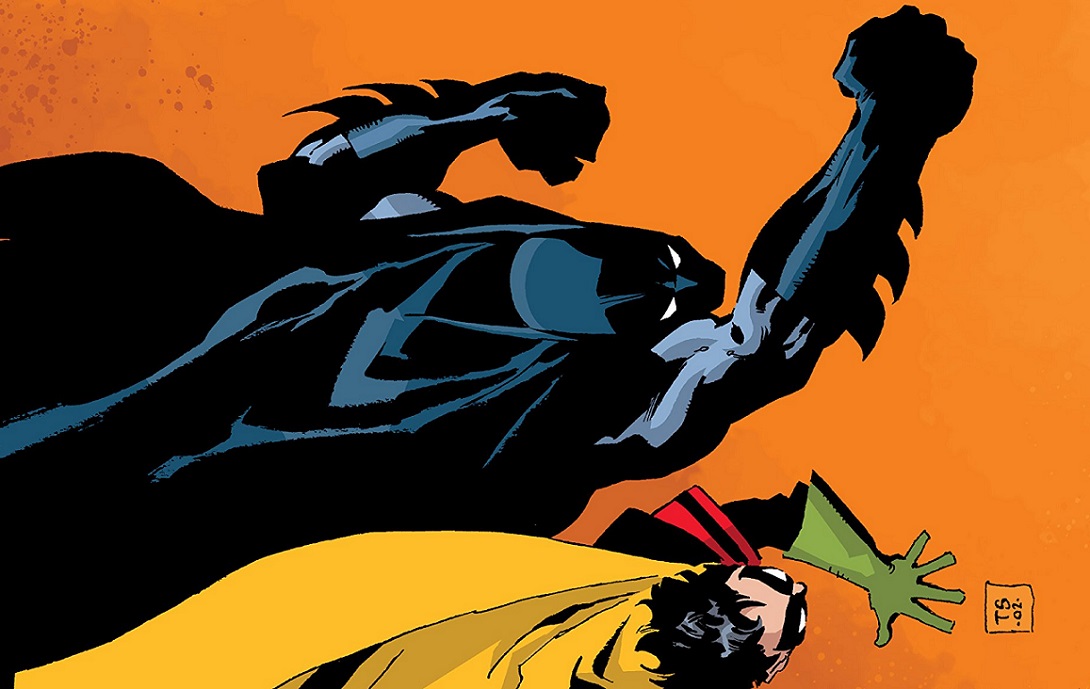 Batman: Year One, and David Mazzucchelli; changing his style from Daredevil: Born Again to Year One was so influential on me. Frank (Miller)’s writing and the coloring of Richmond Lewis, all that was just terrific.

The Joker’s Five Way Revenge, how many people now know that story? That one was a huge influence. Neal Adams and Denny O’Neil, they did a lot of work both on Green Lantern/Green Arrow and Batman before that, but then hadn’t for a while. It’s a terrific story, Neal inked it himself, and not many people know that now. 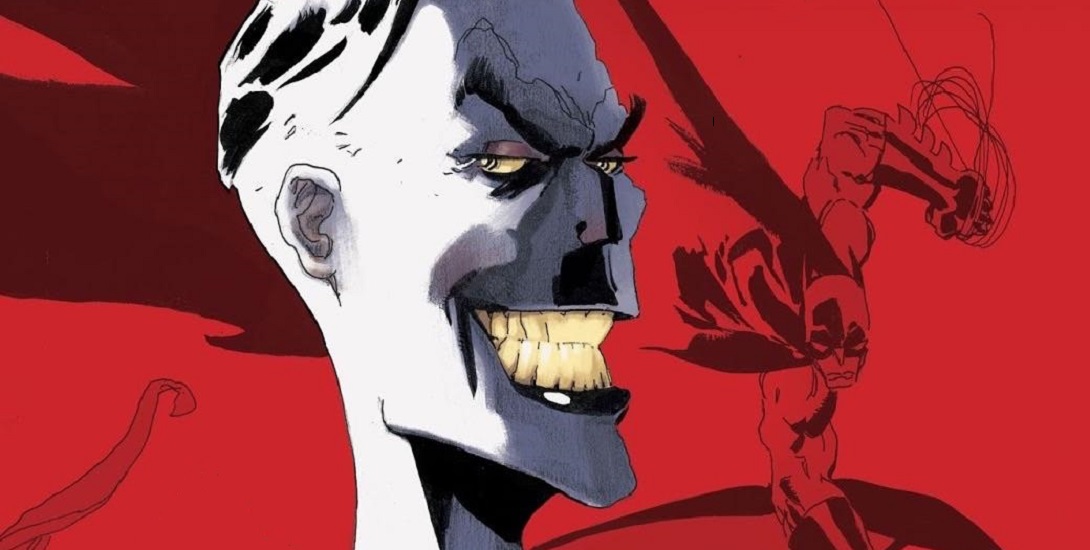 I get up early. I’m not 9-5, I’m pretty disciplined but I’m not like that. One of the advantages that I’ve always thought is that you can make up your own weekend, or your own days off. You’ve got to be disciplined in order to do that… because you can’t just do whatever you want. There are certain hours of the week, that kind of thing. Really it’s a certain amount of pages in a week.

I never got much (stick) for wanting to do comics. Pretty much every time I mention it now, people go, “Really?” It used to be the standard reaction, “There are people that do those things? As a job?” People always though that it was (just for) fun.

The number changes, but the cliché is that everybody has 500 bad pages in them, before their first good one. Sometimes it’s 200, sometimes whatever… but that’s OK. Either that discourages you, or it encourages you to get through those 500, before you can get going. I know I had at least that amount.

Comics interiors. People don’t pay that much attention to it, but I have a lot of fun with, “What’s behind that desk? Who’s this person? Who’s the person at the desk?” That’s how you figure out what’s going on at the desk… that kind of thing.

I have been a huge Tim Sale fan for over 20 years. For me his art on The Long Halloween, Dark Victory and When In Rome is some of the finest in all of comics. His style looks simple at first glance, but his draughtsmanship and storytelling is amongst the best you will ever see. He has a huge fan-base worldwide, and my colleagues at Dark Knight News and DC Comics News all love his work.

The way he changed his style and adapted his talents after learning he was colorblind has made my admiration for him grow, as has his clear passion for his craft, and love for the work of his predecessors, and contemporaries.

What about you, readers? What do you think of Tim and his work? Please let us know, and check out my other conversations with the stars of DC Comics from this year’s MCM London Comic Con. Check out DC Comics News for even more MCM content.

Please check out the Dark Knight News retro reviews by Ryan Lower and Eric Lee for The Long Halloween and Dark Victory too!