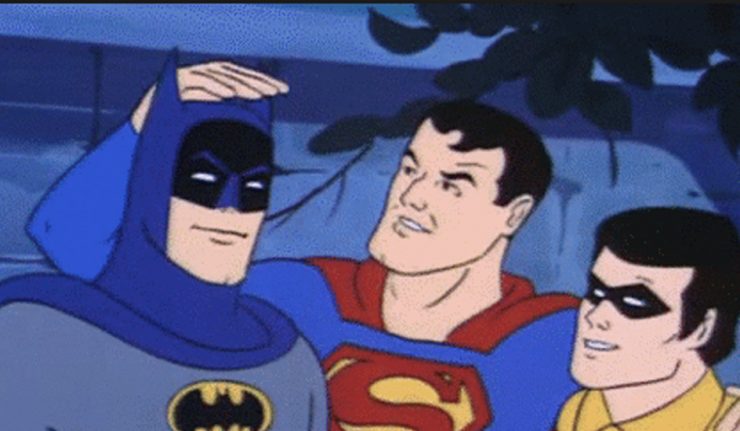 Banded Together From The Cosmic Reaches of The Universe…

I used to have a ritual when I was a kid. I would hop out of bed, tie a towel around my neck, pour a cavity-inducing cereal into a large bowl, and plop myself in front of the television on a Saturday morning.

This was my time. No school for two days, unless you count Sunday School. I was about to spend some time with five friends — super friends, if you will: Aquaman, Batman and Robin (you always had to say their names together), Superman, and Wonder Woman.

Super Friends premiered September 8, 1973, on the ABC television network. The series was produced by Hanna-Barbera. This was an era that didn’t have 24 hour animated channels, or even cable, for that matter.

In 1966 CBS broadcasted animated segments featuring “The World’s Greatest Heroes,” but they actually landed punches on their opponents. They were produced by Filmation. Super Friends relied more on heroic feats and morals to stop criminals.

The first episodes in 1973 were an hour long (or roughly 44 minutes with commercials about the previously mentioned cavity-inducing cereal ads). The Justice Leaguers were joined by “Those three junior Super Friends: Wendy, Marvin, and a “Scooby-Doo” clone named Wonder Dog.

It could have been the sugar, maybe it was the brightly illuminated colors, I don’t know, but whatever it was, I thought I was in heaven. The Flash, Green Arrow, and Plastic Man made guest appearances also.

The show went through some changes during their run. Wendy, Marvin, and Wonder Dog were replaced with The Wonder Twins Zan and Jayna, and the pet monkey Gleek. Unlike the first season; The All-New Super Friends Hour used a format similar to the Filmation/CBS series. The show was broken into segments.

This time fellow Justice League members The Atom, The Flash, Green Lantern, Hawkman, and Hawkgirl guest-starred in the adventures. Hanna-Barbera also introduced new characters like Apache Chief, Black Vulcan (they couldn’t use Black Lightning), and Samurai. They probably did this for cultural diversity.

This series also introduced versions of villains Black Manta (referred to only as Manta) and The Gentleman Ghost (referred to as “Gentleman Jim Craddock”). This would lead the way to the next version of the series.

The producers of the show probably figured out that the Super Friends needed some worthy adversaries. So they introduced familiar DC Comics’ super villains to Saturday morning cartoon viewers. They were dubbed “The Legion of Doom,” and would try to take over the universe on a weekly basis.

Lex Luthor and his cronies seemed like they had the upper hand, but the Super Friends would always come out on top. Still, no punches or kicks from either side. The Wonder Twins were absent from this series, and it was only thirty minutes long.

I’m going to skip ahead to the last two seasons.

Kenner Toys started making toys based on DC Comics characters: The Super Powers Collection. To coincide with the release, the Super Friends were revamped as well. Firestorm was added to the lineup. Adam West would also take over as the voice of Batman. This season also marked the last appearance of the Wonder Twins, Apache Chief, El Dorado, and Black Vulcan.

Darkseid and his minions, Kalibak and Desaad, were brought to the show. They added a level of seriousness not seen in previous seasons.

By this time, I was midway through my teen years.

Puberty was not kind to me. My only solace was in television. I still had one more year with my Super Friends. But they looked different. The Hall of Justice didn’t look the same, and neither did the characters. The Super Friends had grown up (somewhat).

Their style closely resembled José Luis García-López’s work. Cyborg was brought to the group. They didn’t even call themselves “Super Friends” anymore. Issues like disabilities and death were tackled. I liked the changes, but something in me knew this would be their last season.

Super Friends led the way for other series like Batman: The Animated Series (1992-1995) and Justice League (2001-2004). It is available on digital media, and now on the DC Universe streaming service. And even though you can watch it any time you want, I challenge you to wake up early one Saturday morning and watch it in your pajamas!