Deathstroke Actor Joe Manganiello recently gave his opinion on the script that Ben Affleck had prepared for the proposed solo Batman film. While others who have read the script state that fans would like the way the story would have played out, a lot of things revolving around the film itself have been left open to speculation during recent events.

Recently on Twitter Dark Knight Returns storyboarder and director Jay Oliva defended the fact that not only was there a script written but that it was one of the best scripts he had read when it came to Batman. This was in response to Bill Ramey from Batman On Film and his statement saying the fact that there was no story for the lack of interest in his Batman film. Seems quite a few disagree. 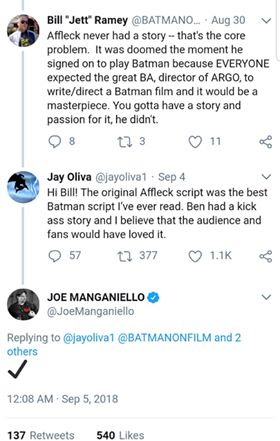 Joe Manganiello added his two cents in the form of an agreeing check mark agreeing with Jay. Recent rumors on the script showed it getting inspiration from the movie The Game. The script supposedly features Deathstroke attempting to take down Batman by setting numerous traps for him trying to break down his spirit, all at the request of the Legion of Doom.

Matt Reeves has recently come on the scene as the director and it is unknown whether or not Ben Affleck will stay attached to the project and in what regard. But what is known is that Reeves is excited to be joining the Batman Universe. In a recent interview with ComicBook.com, he let us in about what his mindset is approaching the film.

For me, what’s always important is to try and find a personal way in. In that way, I do feel like I relate to actors. It’s about understanding emotionally, the way something is. I see this parallel between Caesar and Batman, really, which is this idea of these characters who are grappling with their own struggle and trying to do the right thing in an imperfect world and, so, I do really relate it to that kind of idea.

Currently, there is no release date set for the film. What are your thoughts on Manganiello and Oliva’s comments about the Batman movie?

Sound off below, and on our social media!