“The Return of Kid Flash,” Finale 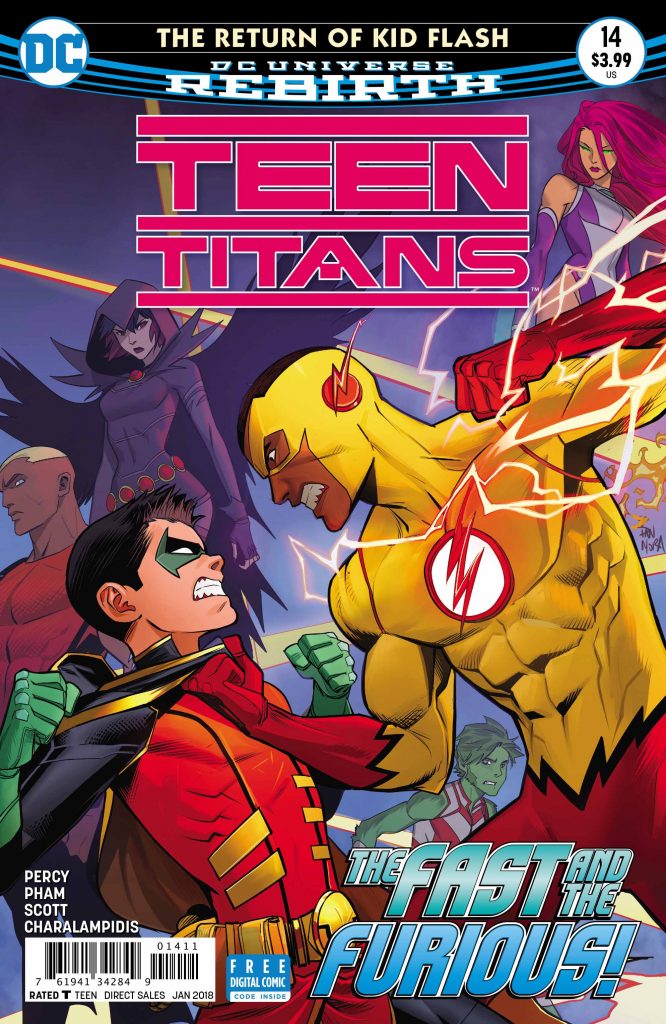 Ben Percy pens the conclusion of “The Return of Kid Flash” in Teen Titans #14.

Readers saw Onomatopoeia trick Red Arrow into triggering a massive tidal wave that threatens Star City in Teen Titans #13. However, Green Arrow informs his protege the tidal wave was but a destructive ruse to get Red Arrow out in the open. The assassin has set his sights on Red Arrow!

Seeing Red Arrow in danger, Damian throws caution to the wind and rushes toward Onomatopoeia in a fierce rage. Kid Flash makes his dramatic return and races around Damian deflecting bullets from their intended teenaged target. But, Damian’s response here is dramatic and uncharacteristic. Has Damian caught…feelings?! Surprisingly, the feelings might be mutual. Red Arrow gives Damian a kiss on the cheek and swiftly fires an arrow to glide away and answer Green Arrow’s call. Could we see a budding romance between these two teenaged sidekicks?

Not surprisingly, Kid Flash and Robin reconcile both agreeing they need to get better. Together, they are stronger than on their own. Kid Flash returning to the ranks of the Teen Titans is a welcomed sight. Certainly, Wally adds power to the team but his personality and relationship with Garth also add depth. The team feels whole again! 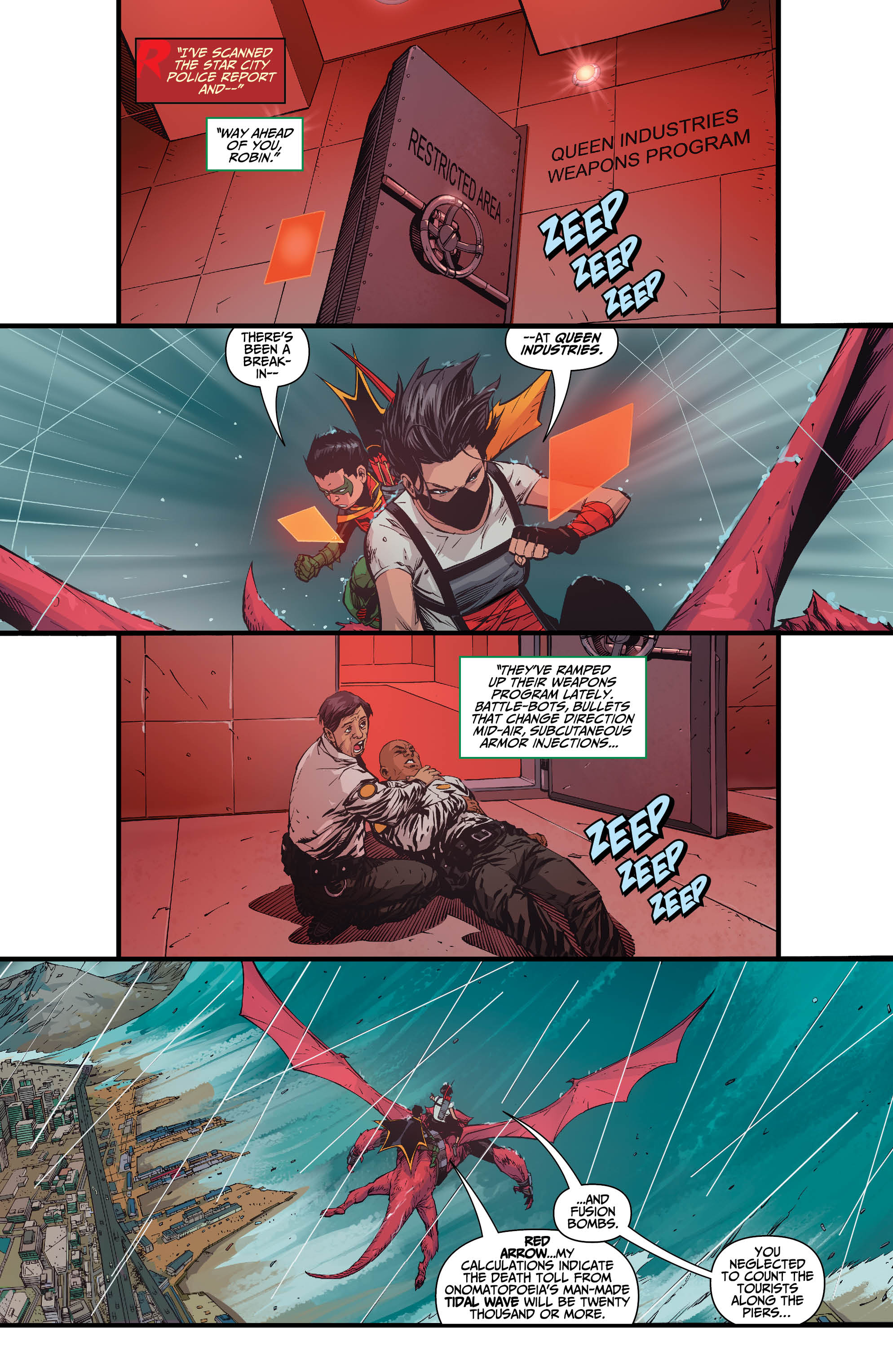 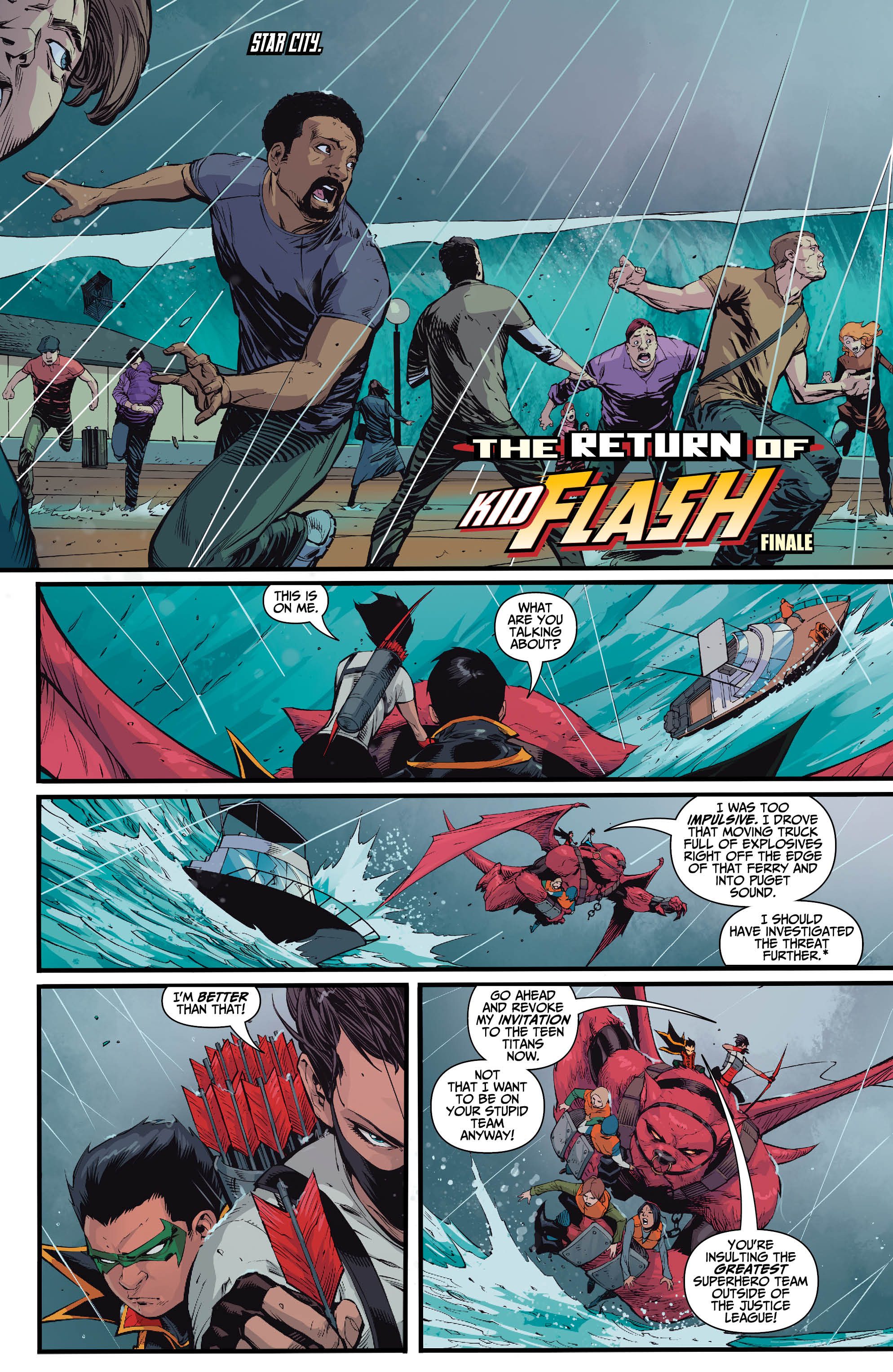 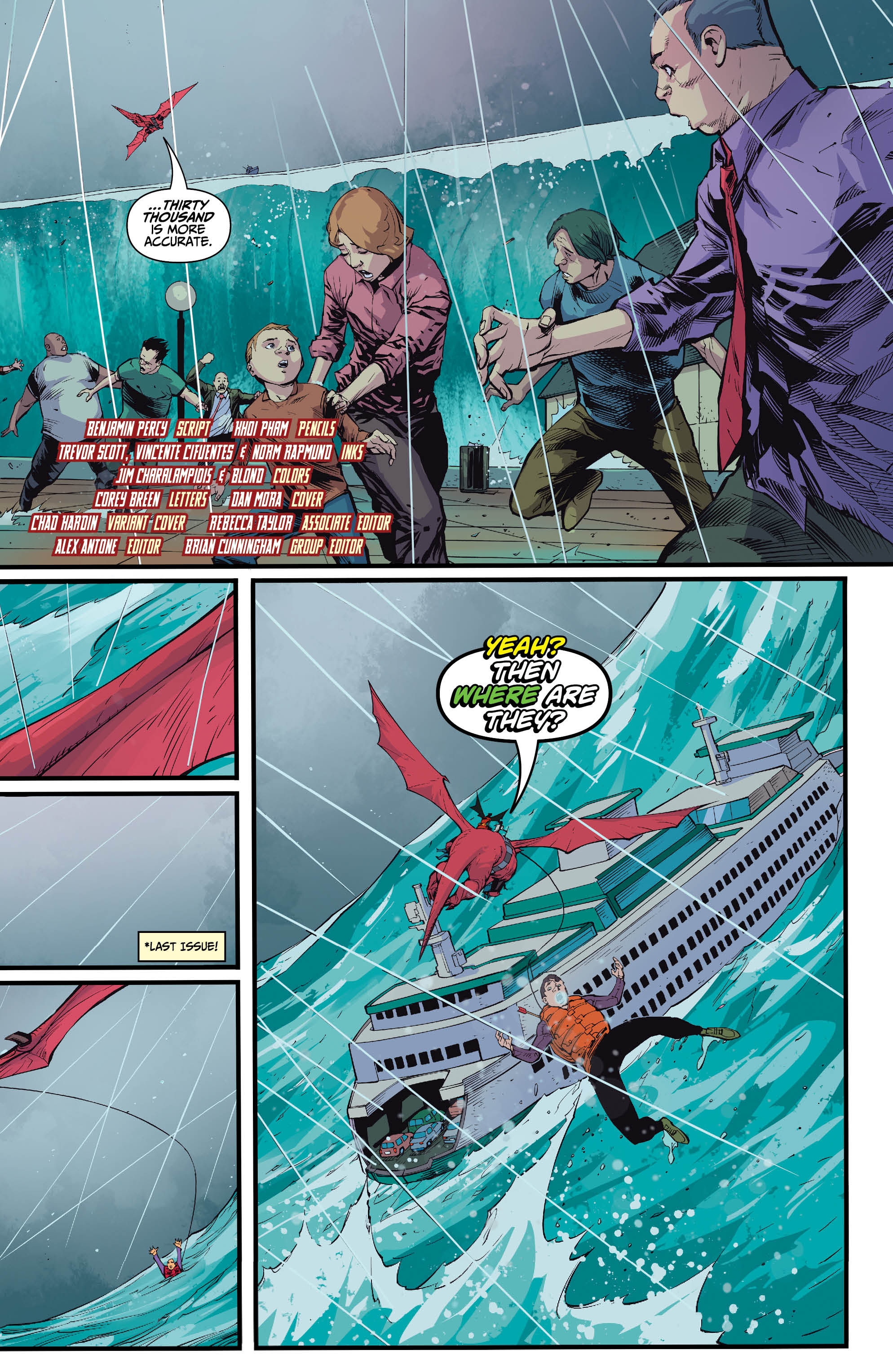 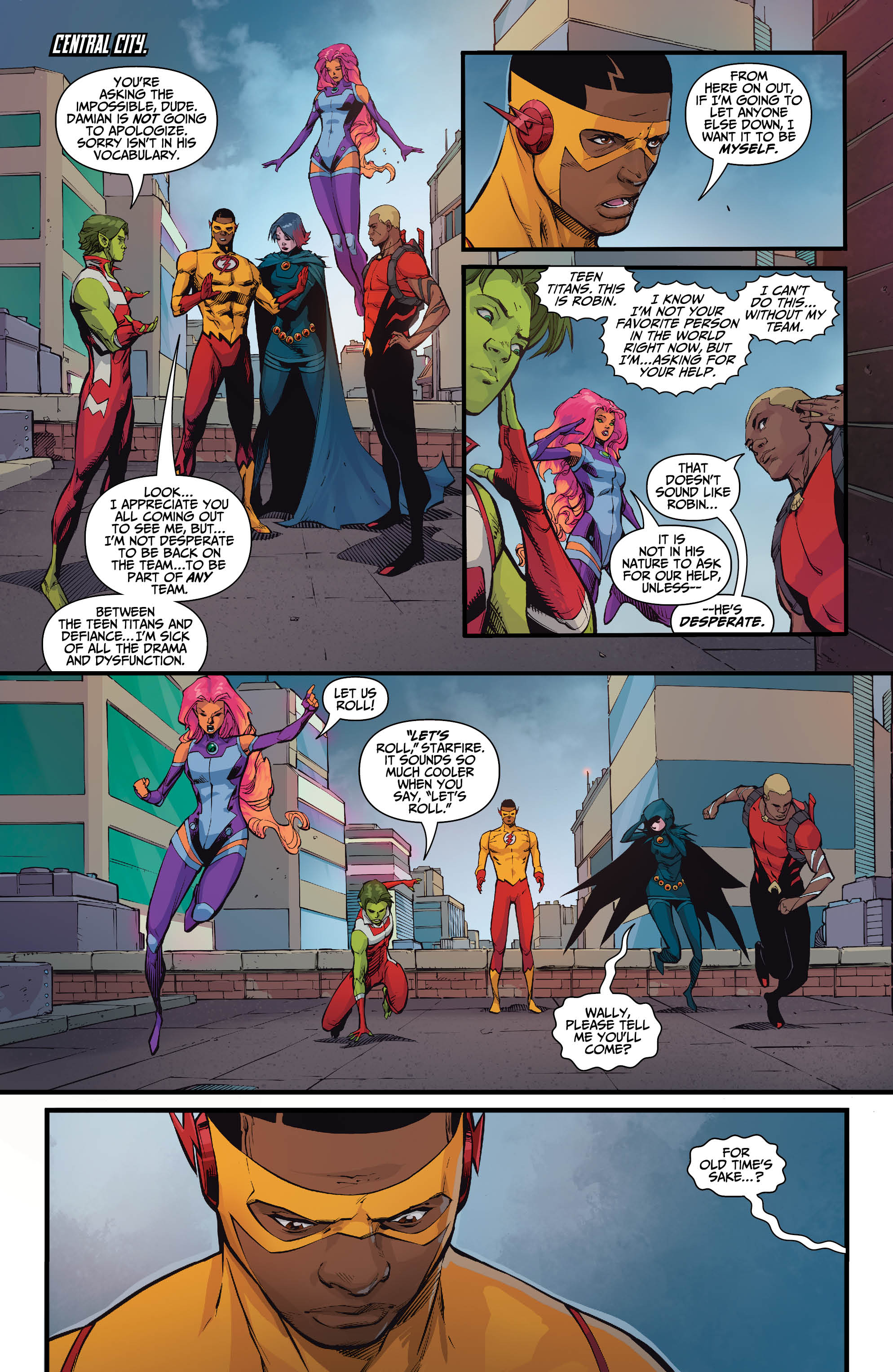 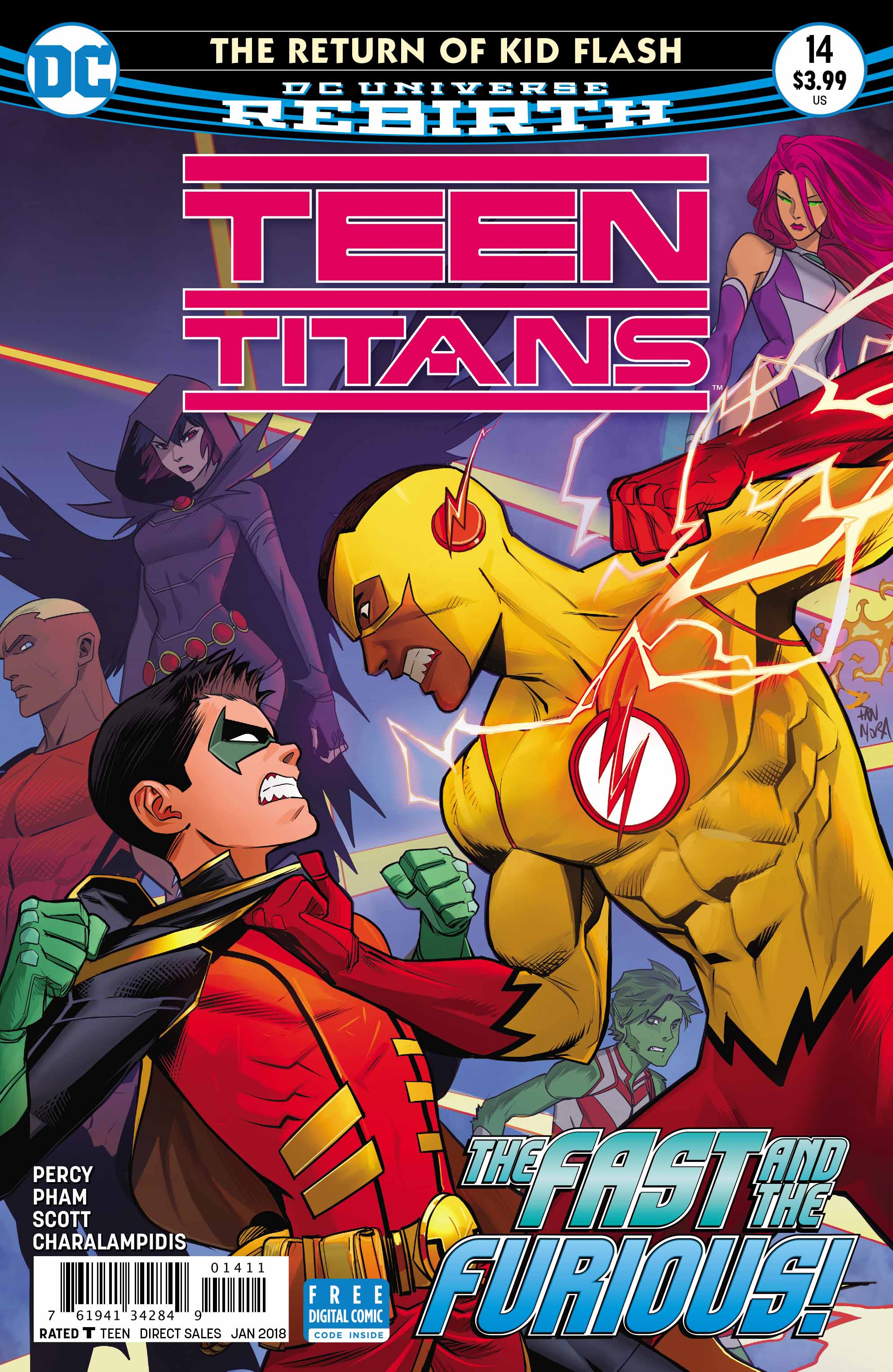 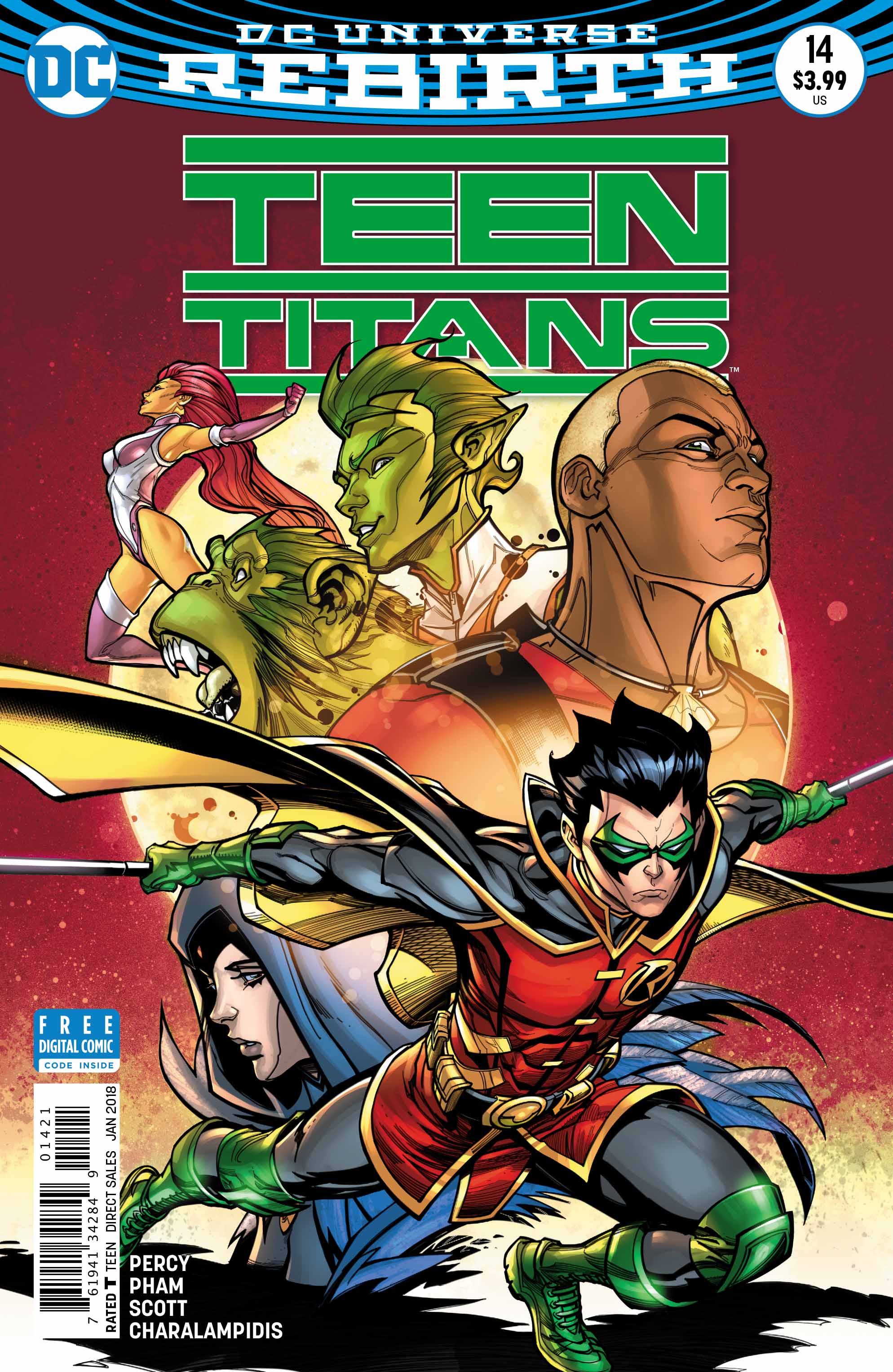 The last panels remind readers Tim Drake has returned from the grave. Yet, he has not revealed himself to his brother or his former teammates. Undoubtedly, this revelation looms large beneath the surface of the Teen Titans storyline and poses an interesting development for the Titans moving forward.

Teen Titans #14 showcases fun dialogue often associated with the title. Most often, this dialogue comes courtesy of two characters, Beast Boy and Starfire. One massive panel shows Beast Boy transforming into a whale and yelling, “Cannonball!” In the same form, he tells civilians it is, “time to get biblical!” Not to be outdone, Starfire says their victory was “punch butt” instead of “kickass,” offering a familiar misappropriation of language by this beloved character. I appreciated the well-timed comic relief and the witty repartee written into these characters. Ben Percy’s work is truly enjoyable to read!

Likewise, Khoi Pham’s artwork in Teen Titans #14 is enjoyable. The lines are neat and clean. The facial expressions are artfully emotive. The colors burst from the panels and tie pages together throughout. Like the dialogue, the art is also well-paced and the issue is pleasing to the eye.

Teen Titans #14 is a fun, enjoyable issue. The panels focus almost exclusively on the heroes with only sparse accounting for the villain. However, this works to the story’s favor as the team along with its individual parts gain depth and options for future stories to come. Adding to its enjoyment factor is its beauty. Sometimes, I am distracted by art that seems inconsistent with the tone of the story. Here, however, the art here is seamless – a perfect match – and supports the story well.

Pick this one up and get ready for what Percy and team have in store for readers in the coming months.